4 Popular Types of Japanese Crab and How to Eat Them

While not all people may like seafood, there’s one thing that seems to have everybody hooked, so to speak. Crab. There are so many types of crab, each with their own delicious flavor, and a plethora of ways to eat it: crab legs, crab soup, crab sushi, tempura crab, and more. Japan has entire restaurants dedicated to this one delicacy, where you can eat however much you want in whatever way you want. Crab is one of the most popular seasonal winter foods in Japan, especially in the northern regions such as Hokkaido, where the waters are cooler and perfect for capturing this choice crustacean. There are three major types of crab in Japan, the hairy crab, snow crab, and red king crab, but the Hanasaki crab with its vivid red, is also famous and very tasty. Read on to learn more about the various types of delicious Japanese crab and the tastiest ways to put them in your belly.

The hairy crab (kegani in Japanese) or horsehair crab is found in the Pacific Ocean and the Sea of Japan. It gets its name from the spiky hairs that cover its entire body. This little critter is smaller than the snow crab and the red king crab, making many people say it is more difficult to eat, but it has a dense , sweet flavor, making the effort of cracking open that shell well worth it. People who call themselves true crab lovers will often choose the horsehair crab. It is often boiled in saltwater to bring out its rich original flavor, then cut into sections and eaten by hand.

The snow crab is slightly smaller than the red king crab, has a bumpy shell, and inhabits the deep sea anywhere from 200 to 600 meters below the surface. They’re known for their long, skinny and delicious legs. The males are considerably larger than the females, their shells growing to around 15 cm wide, have more meat, and can therefore be more expensive. They are known as Echizen crabs or Matsuba crabs while females are known as Kobako crabs or Seiko crabs, and contain orange egg sacks that are delicious served over rice or as sushi.

The king crab has a shell of about 25 cm wide, and has a leg span of more than one meter. It is most closely related to the hermit crab because of its thick, dense legs which make for a large and crabbily satisfying meal. Because the meat is quite light, however, you should have no problem polishing off every last morsel and still have room for dessert.

Hanasaki in Japanese means “blooming flower.” This crab is named for the vivid red color it turns as it boils, and you can see the flavor bloom as it cooks. Hanasaki is also the name of the port off the coast of Nemuro, a city in Hokkaido, where it is caught. While it may look similar to the king crab because of the spines on its shell, it’s considerably smaller, its shell only spanning to about 15 cm wide. This particular species of crab is well known for its sweet meat and the delicious eggs found in the females.

Open Mouth Insert Crab… or 7 Better Ways to Eat Them 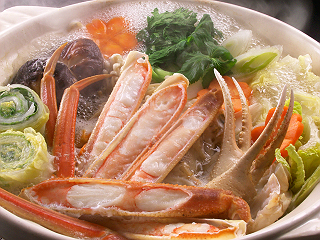 Every winter you can buy crabs in the fresh fish sections in supermarkets as well as order it at many izakaya, a kind of gastro pub, and specialty seafood restaurants. Crab is a popular ingredient in hot pots and soups, for the delicious soup stock it makes, as well as for making sushi.

The texture of crab sashimi is unbeatable. Snow crab legs make a particularly tasty candidate for sashimi, as they’re served extra fresh. Dip them in soy sauce with a dab of wasabi for a well-rounded flavor. If you’re a bit of a food adventurer or enthusiast by any means, this is a great dish to try.

The crab used in nigiri, the most common form of sushi, is packed with a sweet and savory flavor. It’s often served raw or lightly boiled in salt water to enhance the crab’s natural flavor. The sweet crab meat works together with the tangy flavor of the vinegar in sushi rice work together to make the perfect team. Sometimes you can find sushi served with kanimiso, the offal of the crab, and crab eggs.

Everything seems to taste better when it’s fried, and crab tempura is no exception. Tempura is made with cornstarch rather than wheat flour like with other fried foods, so the flavor is lighter. It tastes great with a splash of amadare (sweet sauce), soy sauce, or a pinch of salt.

This is probably the simplest and most popular way to eat any kind of crab in Japan. Simply boil it lightly in salt water to bring out the original flavor of the crab, cut it into easy-to-eat sections, and you’ve got yourself a gourmet yet casual meal that everyone is sure to love. You could also go to a restaurant, have them do all the work for you, and get twice the enjoyment.

Seafood shabu shabu (a Japanese hot pot dish) served with crab meat is a very popular dish during the wintertime. The name ‘shabu shabu’ comes from the sound the meat makes when you dip and swish it through the soup broth. It’s the perfect dish for keeping warm in the cold winter months.

This is a soup made with miso, female king crab legs or other chunks of crab meat, a slice of kelp, and simmered to perfection. It goes perfectly with any seafood dish, especially when paired with the next and final dish on this list. It’s everything delicious about crab in soup form.

Kani-meshi is the absolute finisher to any crab course cuisine. The rice is cooked together with the crab meat and mixed in to distribute the flavor, then topped with more crab. This is a dish often found in boxed lunches and sold at train stations, called ekiben meals. This can be served as a simple side dish or alone for the real crab lover.

If this article made you feel a bit crabby, you can keep those hangry feels at bay by checking out Gurunavi’s restaurant page to find the best crab seafood eateries in your area. Just click on the link here - Happy surfing!