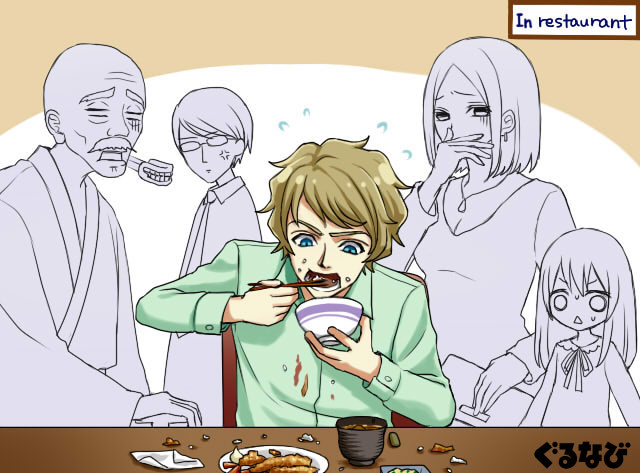 Every culture has its own set of rules for table manners, and Japan is no different. Some of the rules are simply etiquette for politely sharing a meal with others so that you don’t look like a slob. Much like putting your elbows on the dinner table in Western culture, breaking these rules is considered bad table manners but probably won’t offend anyone too much, so you can get away with them if you’re dining at home by yourself.

Other rules, however, have a special cultural origin—usually related to funeral rites—and breaking these can be considered seriously offensive. To help you navigate Japanese dining etiquette, here are seven rules for table manners in Japan.

Rule #1: Do not stab your food with your chopsticks

A chopstick is not a skewer, so mind your chopstick table manners and make sure not to stab your food with it. You also shouldn’t try to use your chopsticks as a knife. In Japan, food is typically served in bite-sized pieces so you don’t need to cut anything with your chopsticks.

In some casual social situations, where you’re trying to split a piece of food to share with others (for example, when everyone is too polite to take the last bite), you should position your chopsticks around the food and squeeze them together until the item splits—obviously, this works better for softer foods. In private, some people do spear their food with two chopsticks and then pull the chopsticks apart to split the food in half, but this is considered poor table manners, and in a public setting it will probably make your dining companions feel a bit embarrassed for you. 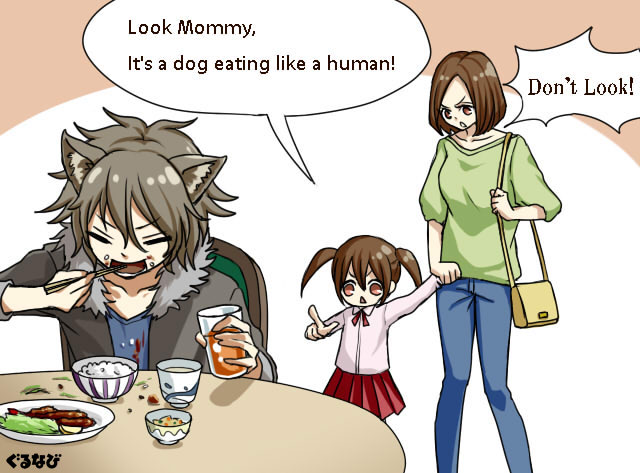 Do not lower your head to your food to eat. Miso soup etiquette allows you to lift the bowl directly to your lips to drink. But if you have a bowl of rice, you should lift the bowl from the table towards you with your free hand and scoop the food into your mouth with your chopsticks. However, it’s bad table manners to lift any other plates or dishes directly to your mouth and will probably get you some awkward stares. Make sure to first transfer the food into to your rice bowl, which you can then pick up to eat.

Rule #3: Do not double dip in communal sauces

The reasons for this should be pretty clear. Double-dipping is unhygienic, so it’s pretty gross to dip something that’s already been in your mouth back into a sauce. This rule applies whether you’re eating with chopsticks or enjoying food like kushikatsu (a fried, breaded food served on skewers). In fact, kushikatsu restaurants typically post clear signs with the rule “No double dipping!” And as most Japanese food is conveniently served in bite-sized pieces, you shouldn’t need to dip more than once anyway. Just make sure to get plenty of sauce on the first dip.

Rule #4: Do not transfer food from your chopsticks to someone else’s chopsticks

While some table manners will just make you seem slovenly if you fail to observe them, this rule is one you’ll want to never break because it’s based on Japanese funeral ceremonies. In the Buddhist funeral tradition, after a body is cremated, the bones are picked from the ashes with special chopsticks and passed from one family member to another to transfer into an urn. So attempting to pass food with your chopsticks—or even accidentally picking up the same piece of food with your chopsticks at the same time as someone else—will strongly remind someone of these funeral rites. It’s a violation of sacred Japanese customs and traditions. Just don’t do it. If you do need to pass food to someone else, ask them for their individual plate (called a torizara) and serve the food to them that way. However, it can be a hygiene issue to touch food directly with your own chopsticks, so make sure to either use the serving utensils provided or turn your chopsticks over and use the blunt end when handling food from a communal dish.

Rule #5: Do not leave your chopsticks standing up in your food bowl

Like rule number four, this one is based on rites for honouring the dead. In Japan, it’s customary to leave a bowl of white rice with a pair of chopsticks standing upright in it as an offering to the deceased. Some people also say that upright chopsticks invoke the image of burning incense at Buddhist funerals.

In terms of Japanese table manners, this violation of Japanese funeral customs is one of the most serious offences made by Westerners. When you’re not eating, the best place to put your chopsticks is on the hashi-oki, (or “chopstick rest”) that’s usually provided in restaurants with your chopsticks parallel to the edge of the table. In more casual restaurants hashi-oki are not always provided, so you can lay your chopsticks across your rice bowl or plate, but make sure that the chopsticks are placed neatly together and not crossed, as this can also remind people of funerals.

Rule #6: No licking/sucking on your chopsticks

It’s pretty rude to lick or suck on a fork or a knife (not to mention a bit of a safety hazard), and the same goes for chopsticks. You also shouldn’t leave them in your mouth, or even worse, use your chopsticks to pretend that you’re a vampire or a walrus, which leads us to our final rule...

Rule #7: Do not play with your chopsticks

Chopsticks are not toys or drumsticks, so you shouldn’t play with them. You also shouldn’t use them to point or gesture at people. The rules for Japanese table manners may seem oddly specific, but it’s important to remember that while some of these are definite no-nos, others are simply guidelines for polite dining in a public setting. It’s important to know the difference between which rules are more flexible and which ones are ironclad so that you can comfortably navigate social situations without offending anyone.