Dine Amid Japan's Samurai Age at This Tokyo Theme Restaurant 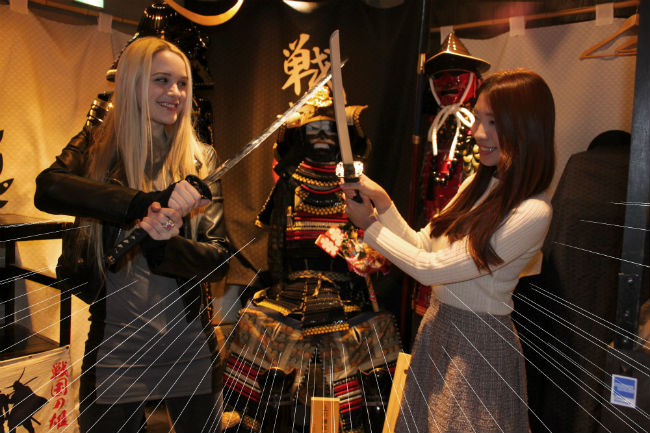 While the word otaku probably makes you think of manga and anime lovers, it’s actually a much bigger idea than just that. You can “geek out” over almost anything in Japan, from bullet trains to fashion, without batting an eyelash. And where there’s an otaku subculture, often there’s an amazing theme restaurant to go with it. Keep reading to find out about the latest otaku trend in Tokyo called “history girls” and where they go to dine!

The History Girls of Japan 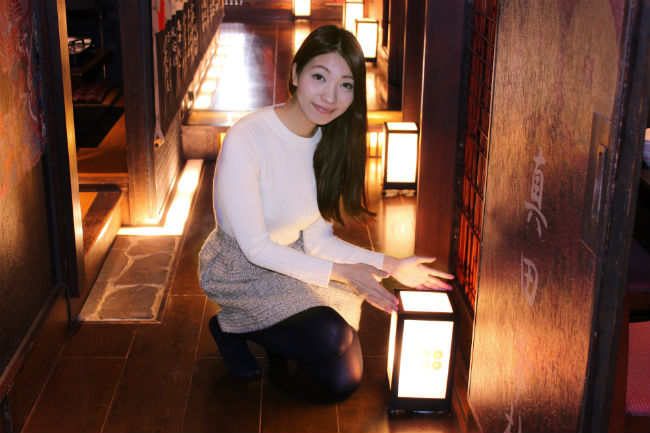 You might think a love of katana swords, Japanese armor and ancient family crests would be a purely male thing in Japan, but you would be wrong: Many of the most devoted otaku history buffs today are in fact women. They even have a name, reki-jo—literally, “history girls.” We asked history girl Satoko to take our tsukemen loving friend Jeri to her favorite history themed restaurant, Sengoku Buyuden in Shinjuku—an eatery that answers the call of the samurai for one and all! 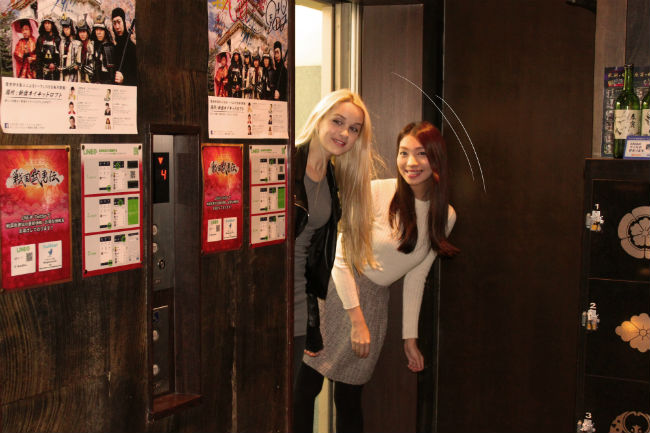 The Sengoku period, a turbulent century-long time of conflict in Japan, was also the age of the brilliant samurai generals. Sengoku Buyuden, a samurai themed restaurant in Tokyo, aims to bring the history of that period into the present in a very unique way. While there are plenty of cool artifacts to see at the restaurant, which is a kind of a themed museum in itself, it’s the restaurant’s ability to bring history alive that keeps Satoko, our resident reki-jo, coming back.

While many reki-jo do love the history itself, others are devoted to following historical legends as fervently as today’s pop culture celebrities, which helps explain Sengoku Buyuden’s allure! Whether you feel like touching a piece of Japan’s legendary warrior past or simply want to mingle with the samurai general of your dreams, Sengoku Buyuden is one themed restaurant in Tokyo that has something for everyone. Don’t take our word for it, though—why don’t you step inside with Satoko and Jeri and see for yourself?

Samurai Battle Armor and Weaponry Add to the Atmosphere 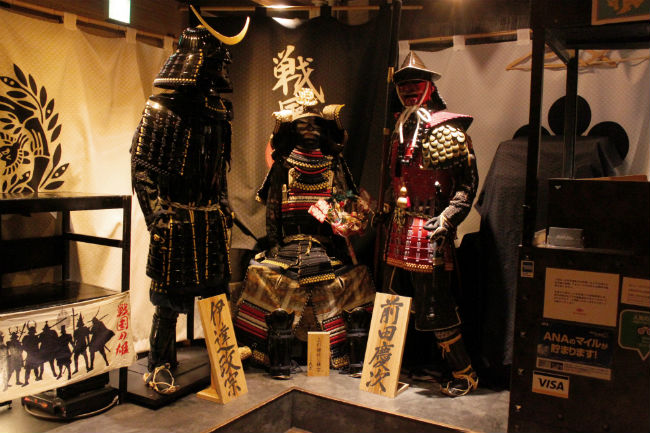 When entering Sengoku Buyuden, the very first thing you notice are three suits of armor, each replicas of those worn by three storied samurai of the Sengoku period: Maeda Keiji, Sanada Yukimura and Date Masamune, known as “the one-eyed dragon” (the dragon part may be a bit exaggerated, but he did have only one eye!).

While all of samurai have made their mark on historical as well as popular culture, Satoko confessed that she only has eyes for one: Date Masamune. Although the two are obviously fated never to cross in this life, Satoko can still capture the next best thing: A photo with his armor! 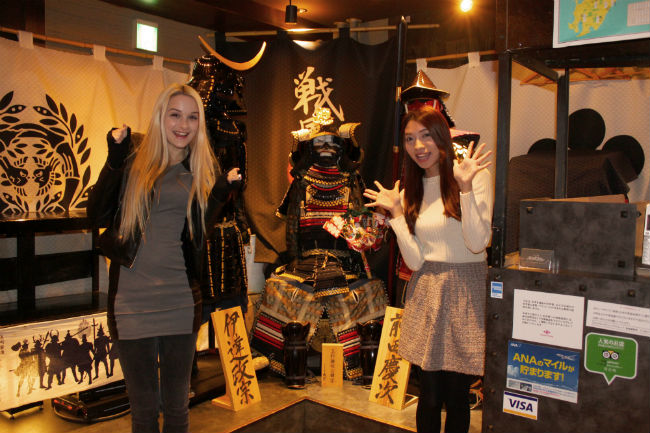 Being able to take photos among all these great historical artifacts is one of many great things Sengoku Buyuden has to offer. 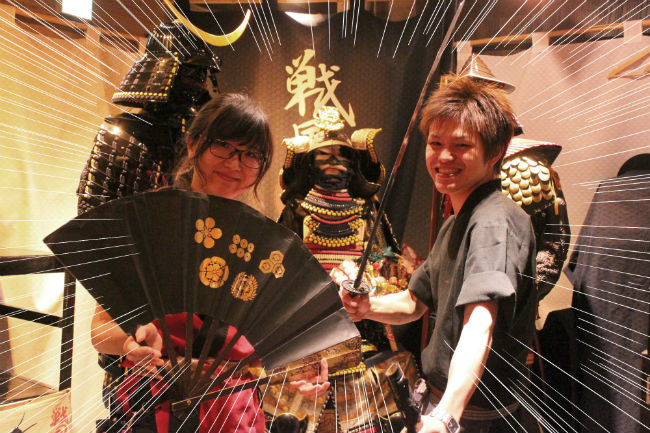 Of course, it’s not just the armor, but the weapons that truly fascinate. As a female ninja and a strapping young warrior wielding a katana appeared to greet us at the door, it was not difficult to understand why some people choose to walk the path of the Japanese history buff. 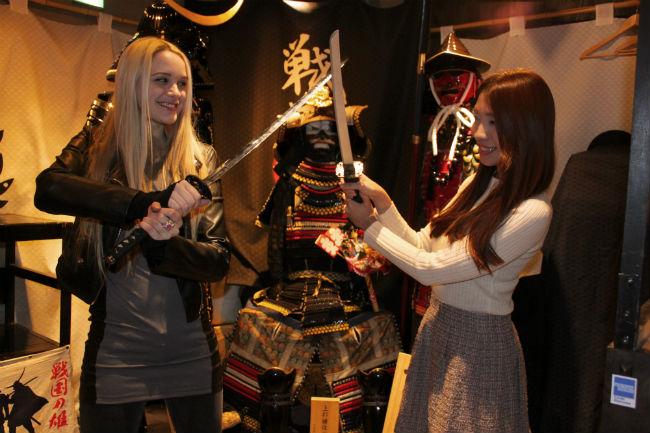 Not to be outdone by the warriors greeting us at the door, Jeri and Satoko tried out the katana for themselves. In the end it’s difficult to say who won, although we can all agree that the look in Jeri’s eyes is definitely a bit intimidating. Either she was caught up in the moment of battle, or on her way to becoming a full-fledged reki-jo herself!

The Warring Clans of Japan 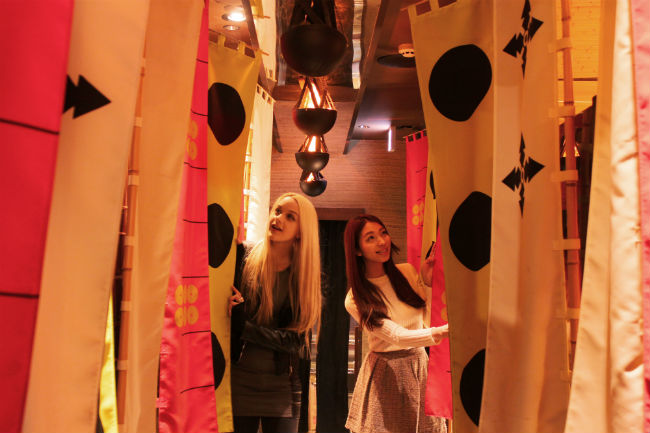 Of course, the appeal of Sengoku Buyuden goes beyond the weaponry, nimble ninjas and frightening swordsmen. Ever steeped in history, the restaurant is divided into 17 chambers, each devoted to a specific Sengoku period general and designed with an atmosphere befitting each. The clan emblems of each general are printed on banners and displayed in the hallway, helping to further transport you to the Sengoku period, a time of warring clans and shifting allegiances. 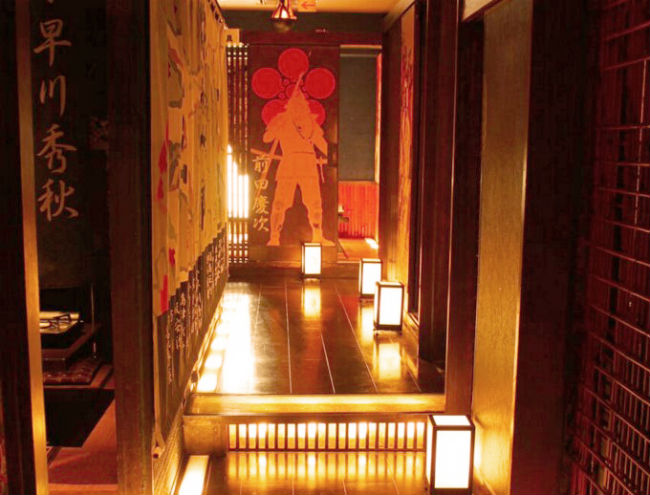 The striking flags and lighted path may look mysterious, but Satoko knows exactly where she is heading: To Date Masamune’s themed room, located in the back of the restaurant. 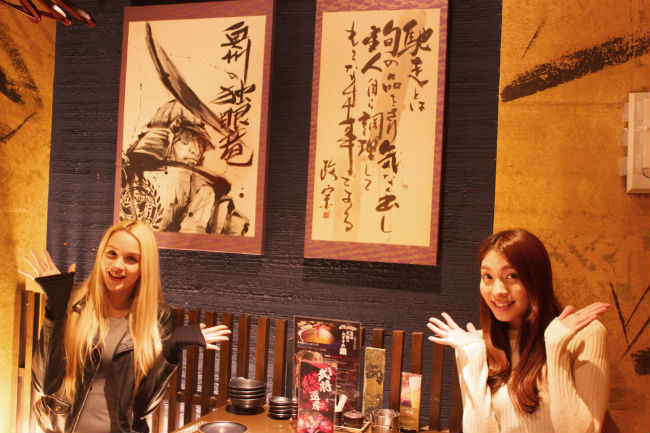 Inside the room Satoko and Jeri discovered a treasure trove of detailed effects touting the warrior’s prowess, including Japanese shuji (calligraphy) art. 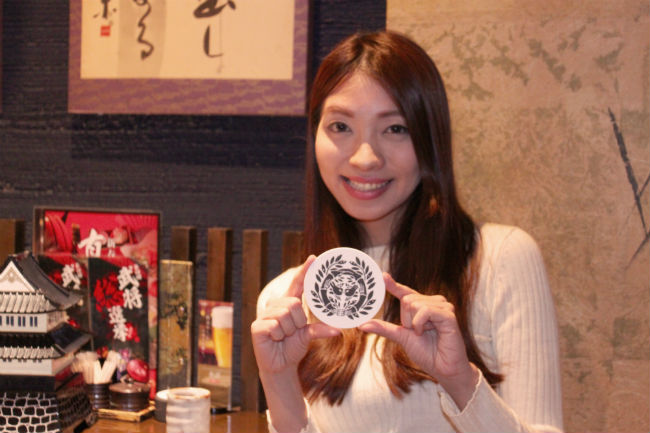 The clan emblem was even printed on a coaster! A true find for any history girl. 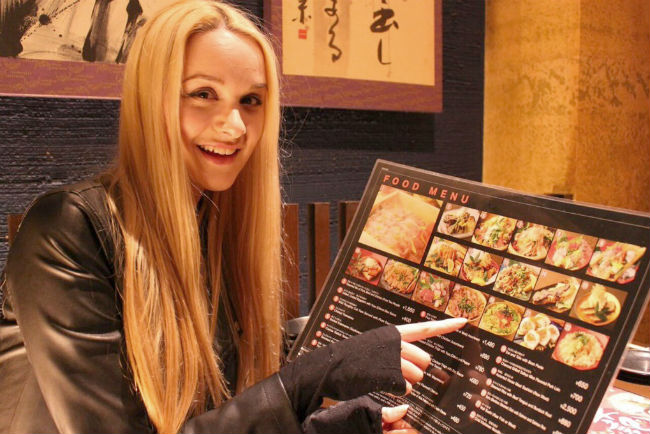 To Jeri's relief, English menus are available at Sengoku Buyuden. So what were these two reki-jo going to order? 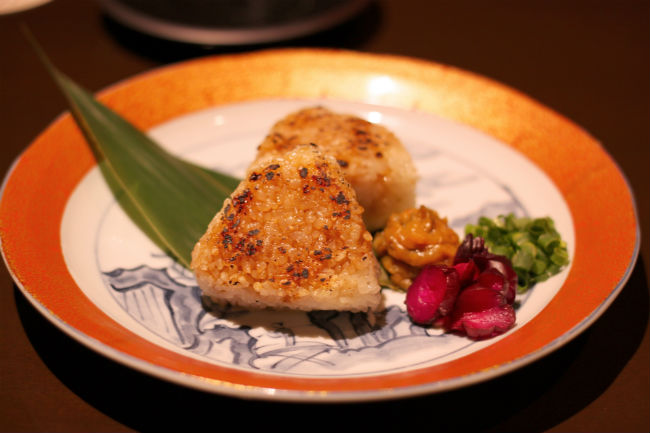 They started with deliciously crisp kensayaki-onigiri, grilled rice balls. These eat-and-run snacks were popular with samurai due to the ease by which they could be carried into the battlefield. While times have certainly changed, the convenience of onigiri has endured into the present. 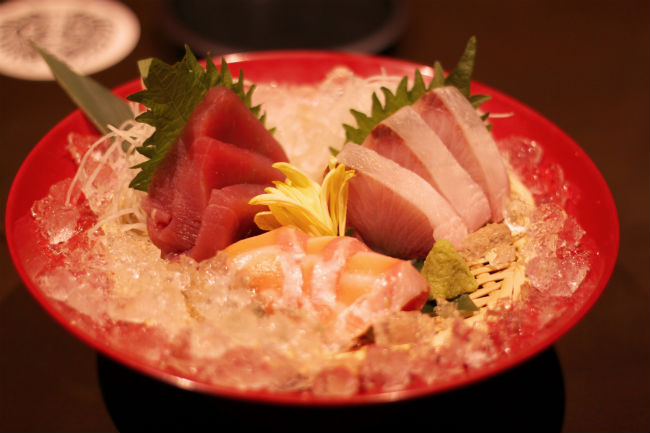 The rest of the cuisine that Satoko and Jeri dined on, like this delectable sashimi platter, fits modern Japanese sensibilities just as much as it might have those of the samurai long ago.

The third course of the evening began with a surprise unveiling…

A medley of thinly sliced steamed meat that is a popular dish among the reki-jo. 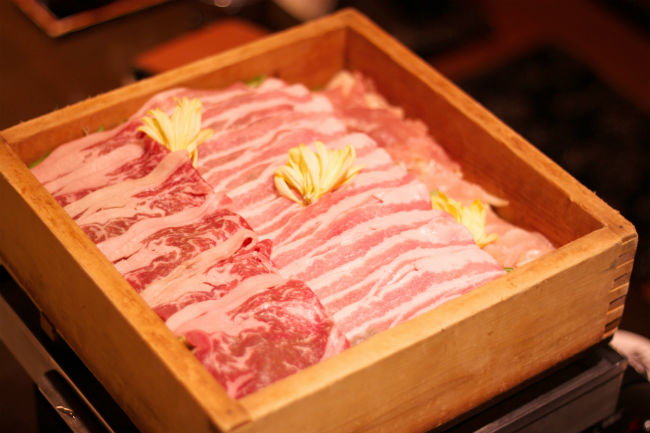 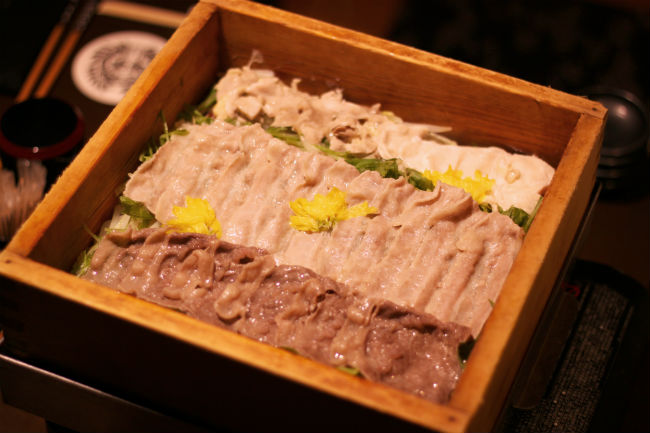 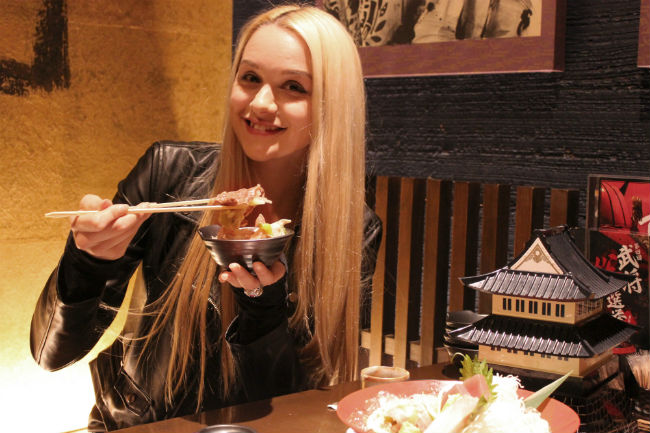 As Jeri can attest, the healthy flavors of this dish were delicious paired with Sengoku Buyuden’s secret sauce.

Before ending the evening with Date Masamune, the history girls decided to splurge with dessert! 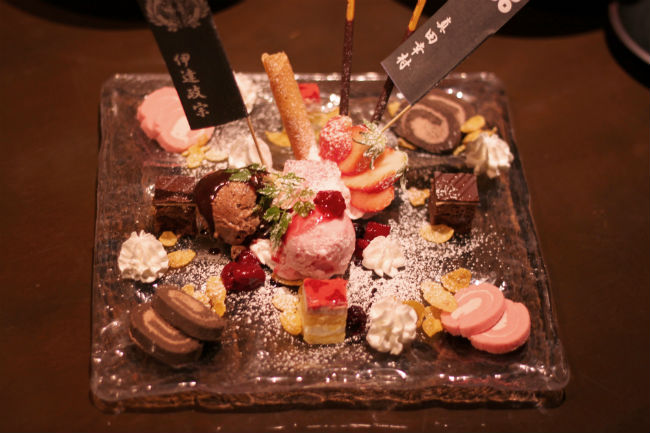 The fact that it is most definitely not traditional samurai fare takes nothing away from the beautiful display itself. As for the taste, just look below to see what Satoko and Jeri thought! 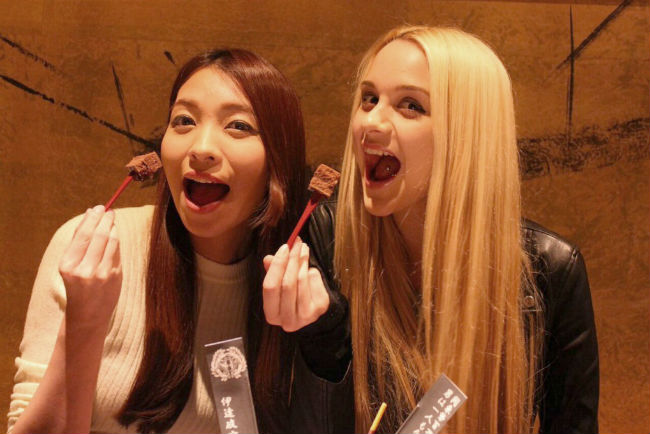 You don’t need to be otaku to enjoy Sengoku Buyuden. As for Jeri, it looks like she has become an honorary reki-jo... or maybe she just had a great time! Either way, their journey to the Sengoku Buyuden made these two very happy. Surrounded by good food, Date Masamune and savory sweets, this history girls outing was a success. Why not try Sengoku Buyuden for yourself?