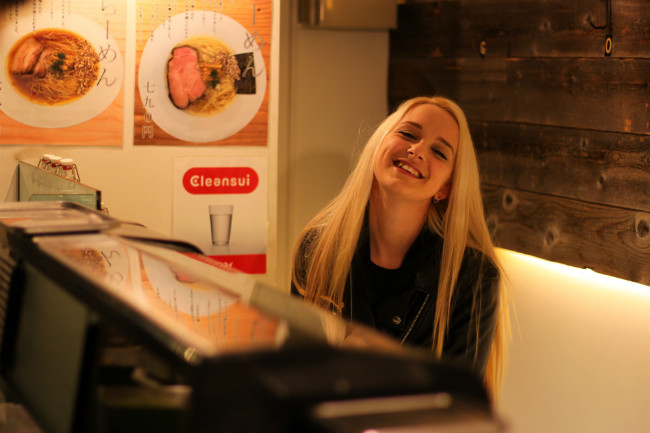 After eating so much ramen, even the most enthusiastic noodle connoisseurs might begin to ask: Isn’t there anything more to life? Tsukemen looks a whole lot like ordinary ramen, but one taste will tell you otherwise! We invited our French friend Jeri to try tsukemen for the first at Shinjuku’s Shono Gotsubo. Keep reading to find out what she thought and why you should do the same! 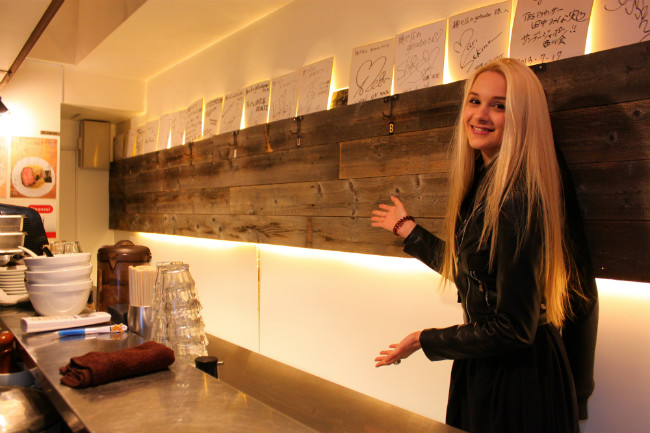 The first thing that you might notice is the size of Shono Gotsubo, which is named after the Japanese traditional measurement based on tatami mats. A rough translation for this shop’s name would be “a really, really tiny place.” The second thing is that, unlike ramen shops dotting the many street corners of Japan, Shono Gotsubo’s interior is refreshingly clean and well-lit with ambient light. Old wood paneling gives a feeling of being surrounded by nature, while spotless stainless steel counters gleam like those in upscale kitchens. This terrific blend of classic and modern design—not to mention the wonderful aroma—very much appealed to Jeri, who was more than willing to chow down for our cameras! Before getting down to the business of eating, though, one important question remains: How is tsukemen different from ramen?

Ramen vs. Tsukemen: Deliciousness is in the Details

Athough the word “tsukemen” was first used in 1973, the original concept was the brainchild of a young Mr. Yamagishi, a ramen shop worker who a few years earlier came up with an intriguing idea for selling left-over noodles. At first glance, one could be forgiven for thinking that ramen and tsukemen (pronounced “skee-men”) are one and the same. They both have noodles and they both come with broth, so what’s the big deal? Let’s take a look. 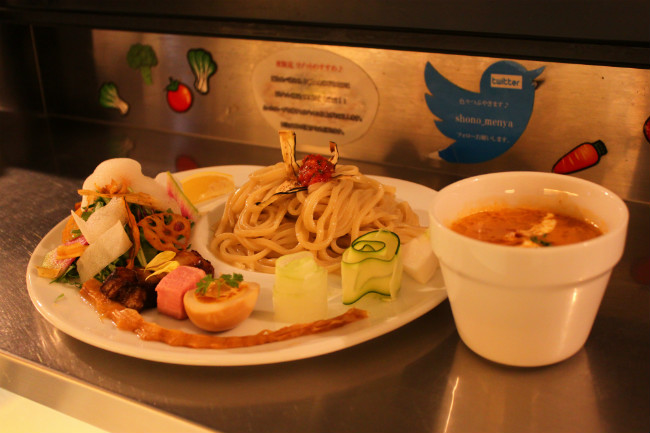 While ramen is served with both noodles and soup broth together in the same bowl, with tsukemen, the broth and soup are served separately. The soup, which may be hot or cold, becomes a dipping sauce into which hungry people are expected to “tsukeru” (or “dip” in Japanese) their noodles. This shouldn’t make much of a difference, but think about it: Tsukemen allows you to control exactly how much or how little soup you want to eat, which means you control the taste of every bite.

Because ramen noodles are all about swimming in the soup broth, they aren’t treated any special way before being tossed into the bowl with everything else. On the other hand, tsukemen noodles are meant to be enjoyed outside of the broth by themselves, dipped or not. That’s why they are first boiled, then rinsed and cooled with clean, cold water. This not only gets rid of excess flour but also makes them smoother, less sticky, and generally tastier. Much like choosing the right wine for fish or steak, noodle thickness, which varies by shop, is paired to fit perfectly with the thickness of the broth.

From pork and chicken, to seafood and other variations, there are too many types of tsukemen broth to name—at Shono Gotsubo, the house specialties are either shrimp and tomato or white chicken and ginger sauce. Whether hot or cold, one thing most tsukemen broths usually have in common is a dense, deep flavor and consistency that can be even thicker than ramen. While awesome for dipping, it would leave most people gasping for a glass of water if they tried to slurp it up. That’s why tsukemen restaurants serve so-called “soup wari,” a separate soup that, when poured on top, makes the broth perfect for drinking. 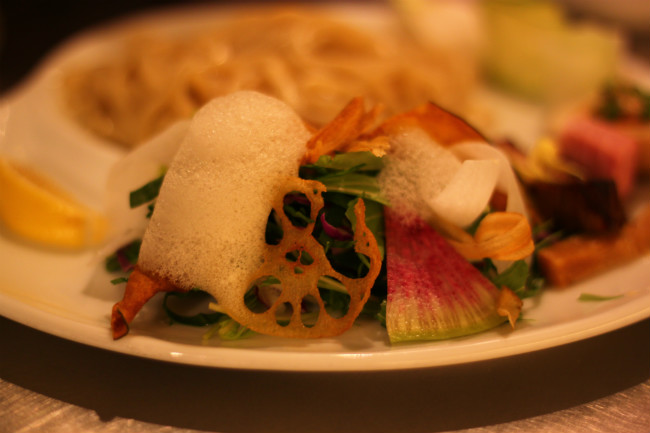 Generally, both ramen and tsukemen are broth-brothers; vegetables typically take a back seat to meat (like finely cut pork cutlets) and eggs. If green onions are offered, they are sliced thin and sprinkled on top; bean sprouts, a ramen staple, have very little nutritional value.

On the other hand, Shono Gotsubo serves tsukemen with a refreshing difference, using seasonal vegetables from all around Japan and even proclaiming that “Eating Tsukemen means Eating Vegetables,” a philosophy they hope will help improve the unhealthy reputation that seems to follow Japanese noodle varieties like ramen and tsukemen.

Jeri is quite the health nut herself—let’s see if Shono Gotsubo’s tsukemen makes her want a second dinner date!

How to Eat Tsukemen 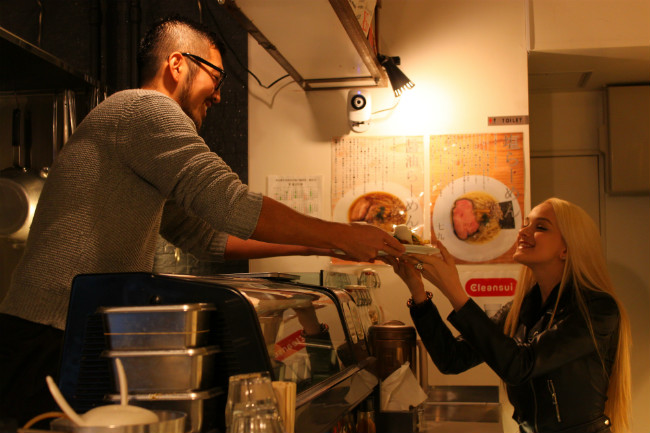 Just as soon as she entered the restaurant, Shono Gotsubo’s coveted “Vege Tsukemen”—a mouth-watering cornucopia of seasonal vegetables including spinach, purple cabbage, turnips, Japanese radishes, lotus roots, pumpkins, burdock, lemons, tomatoes, and eggplants, to name just a few—caught Jeri’s eye. Was she able to enjoy her tsukemen date properly without too many Japanese foodie faux pas? Let’s find out if epicurean love was in the air. 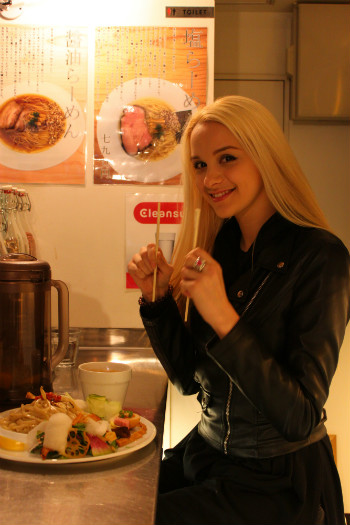 After meeting her meal for the evening, she broke the ice by splitting apart her “waribashi.” Not a bad start! 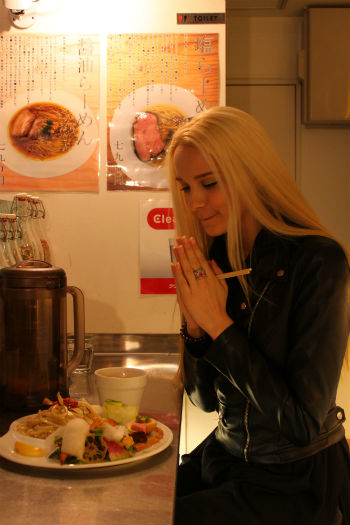 This was followed by the standard Japanese mealtime prayer, ”Itadakimasu!” 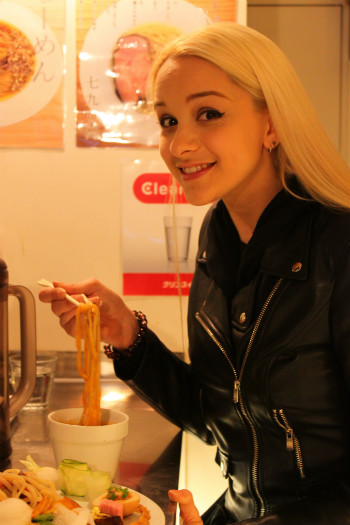 After small talk was out of the way, it was time to dig in. 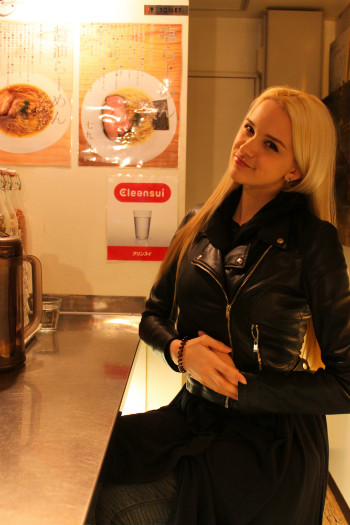 With the delicious tsukemen eaten, Jeri was still hungry. What was she to do? 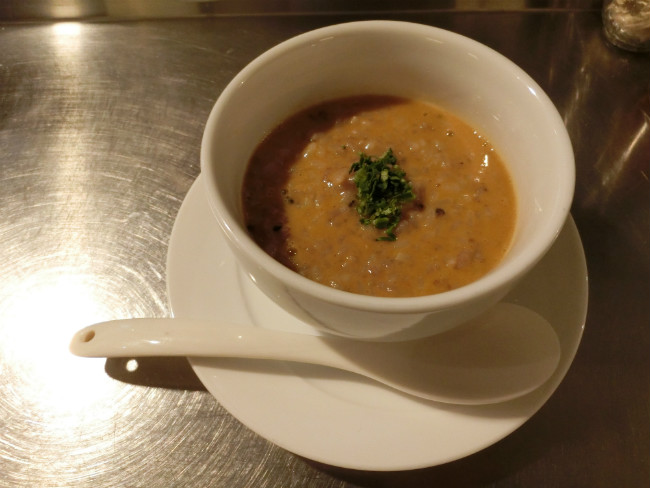 Just add rice, and the rich soup becomes risotto, a Shono Gotsubo specialty! But would Jeri and the risotto get along? 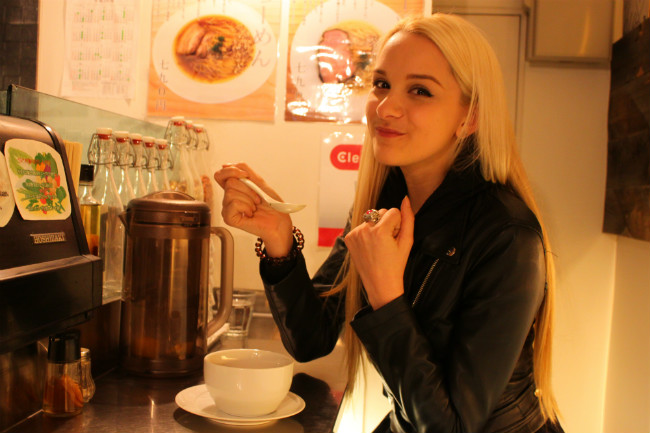 Yes! Just like the delicious soup and noodles, Jeri and the risotto are a match made in heaven! 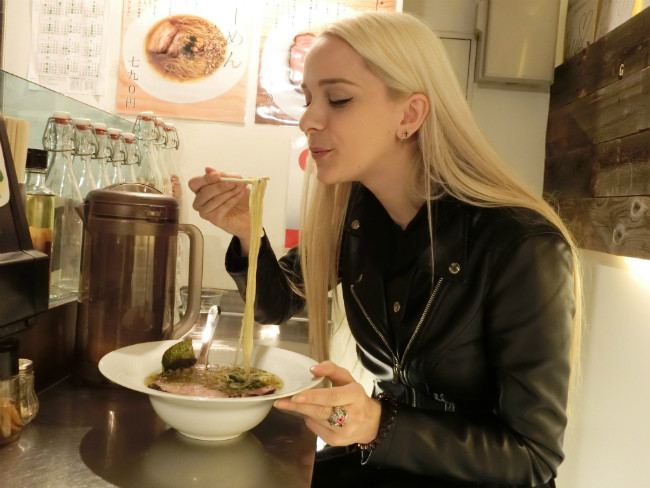 Jeri may have started something new with tsukemen, but she and ramen are still very good friends. Just one last meeting at Shono Gotsubo before she and ramen say goodbye...for now. 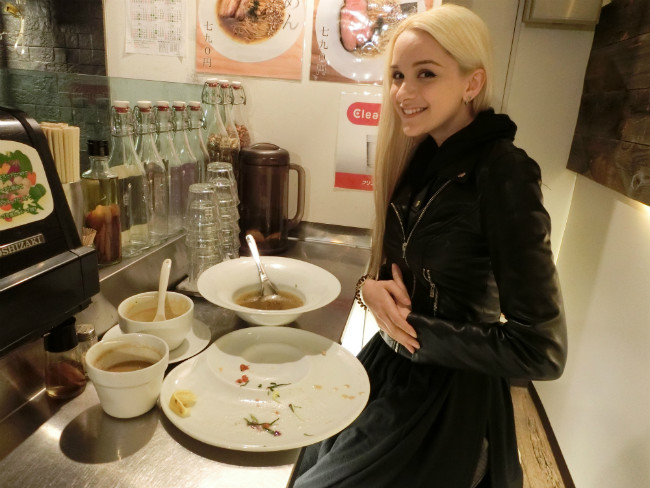 It looks like Jeri has found a new epicurean flame for tsukemen (we hope ramen isn’t too heartbroken). 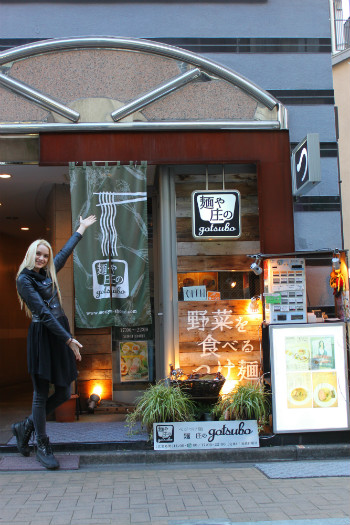 If you’re looking to dump ordinary ramen for a new foodie romance, we suggest finding your way to Shinjuku’s Shono Gotsubo for a deliciously healthy bowl of tsukemen.