Do You Know That ONE Dish That the Japanese Love but Tourists Don't Know Of?

Do You Know That ONE Dish That the Japanese Love but Tourists Don’t Know Of?

Close your eyes and imagine your favorite Japanese dish. Did you imagine sushi, tempura, or ramen, delicacies that are loved by many people? Or if you are a bit more familiar with Japan, did you think of yakitori (grilled meat skewers), tonkatsu (pork cutlet), or fugu (blowfish) instead? Since Japan is an archipelago, it is no surprise that it has developed its own unique food culture. Today, I would like to introduce a delicious way to enjoy “motsunabe (モツ鍋)” – a dish that can hardly be found overseas but is famous in Japan, especially among all the “nabe (鍋)” dishes.

What is nabe or Japanese hot pot? 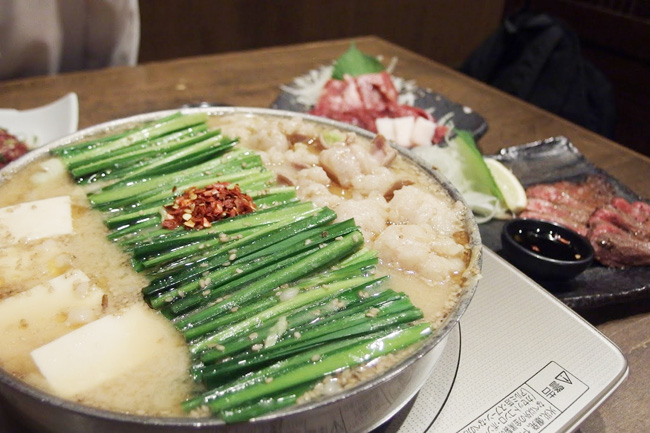 Nabe or Japanese hot pot is a type of food essential for the cold winter months in Japan. One of my Japanese friends even said that there is no way for her to let winter pass without eating it at least once. Nabe was also introduced as the most underestimated Japanese food in a certain article.

Nabe refers to the dish wherein many ingredients are simmered in one big pot of stew. There are a variety of unique nabe dishes all over Japan depending on the area. It is said that eating nabe with the family on a kotatsu (Japanese heated table), a practice originating from ancient Japan, is one of the things that reminds Japanese people of winter season. Some examples of distinctive nabe are the eye-catching tomato nabe that contains whole tomatoes and the kiritanpo nabe that contains stick-shaped rice cake. Meanwhile, the one that I will be trying today is the motsunabe which Fukuoka is also famous for apart from ramen.

The Japanese word “motsu” basically refers to offal or internal organs of cows and pigs. According to the best anthology of Japanese poems compiled in the 7th century, offal has been eaten since the ancient times in Japan. Though some people may find it difficult or unappetizing to eat, motsu is considered to be one of the popular foods in Japan since it is not only tasty but is also cheap and said to have beautifying effects due to the high amounts of collagen. Therefore, motsunabe is a hot pot dish with various offal stewed with vegetables such as cabbage, leek, and garlic. People say that the exquisite thing about motsu is its soft texture that resembles snow melting in your mouth. Though I have been in Japan for two years, it will be my first time to have motsunabe as I head on down to the restaurant hoping to satisfy my appetite.

Restaurant with an elegant atmosphere 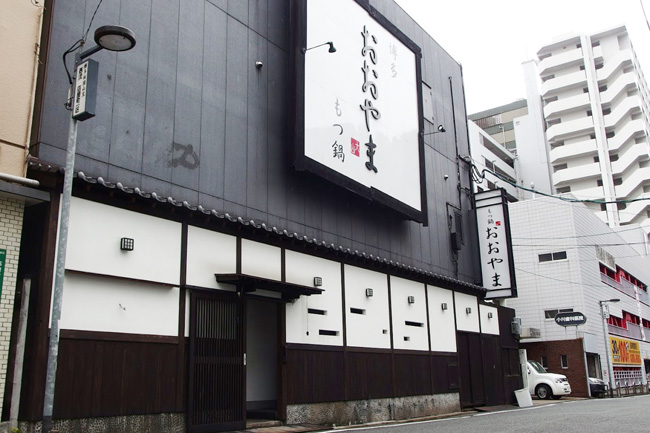 The place that I visited was the main branch of a restaurant called “Oyama (おおやま)” located in Fukuoka. It seems that they also have branches in other cities such as in Tokyo and Osaka. The restaurant is easily accessible as it is only a 3-minute walk from the nearest station so you surely won’t get lost. As I walked towards it, the restaurant's exterior appearance immediately caught my attention as it was stylish and it gave off a traditional Japanese feel such as of a Japanese castle. 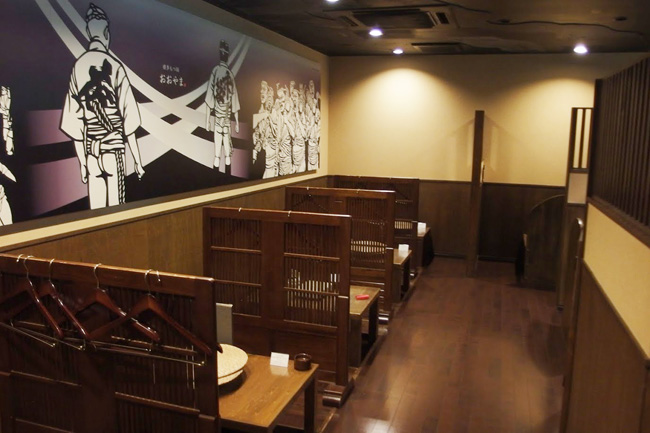 Equally reflecting what was on the outside, the interior of the restaurant also had a traditional kind of atmosphere feel with a Japanese-style picture on the wall and calming lighting. Seeing all of that made me even more excited for the food that is about to come. 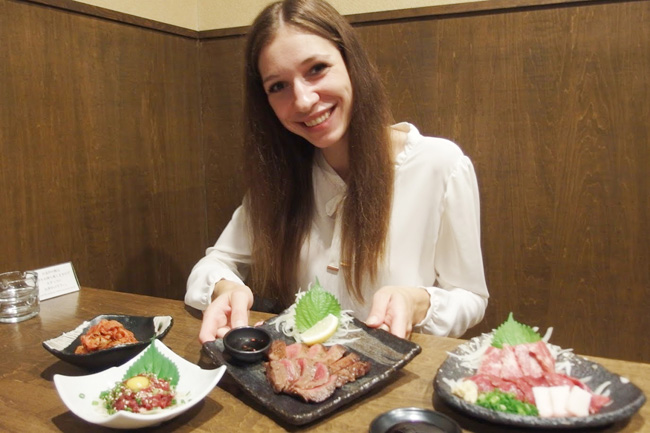 They provide foreign language menus, namely English, Korean, and Simplified Chinese. After much hesitation on deciding which dish to order from the many options, I ordered the raw horse meat sashimi assortment which the staff recommended. I wanted to try horse sashimi because of its high nutrition value despite having low calorie. 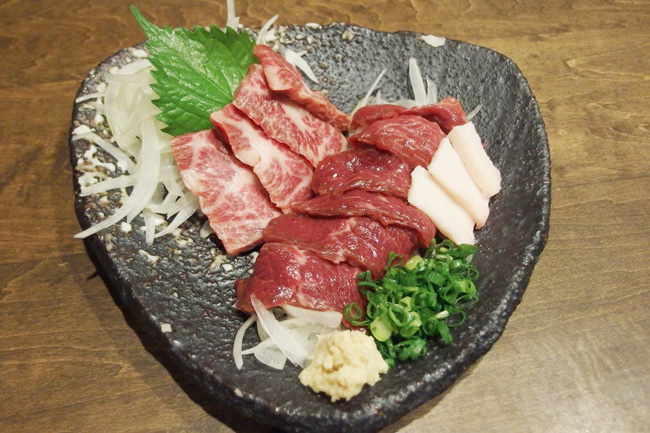 Three kinds of horse meat arrived on a platter – fatty, lean, and the crest parts that only horses have. They all differed in appearance and texture and its intense flavors surprised me. I especially enjoyed the crest part as it was creamy and I felt the sweetness in my mouth. It was a very delightful first experience.

Next, I ordered the raw horse meat yukhoe, the domestic beef tongue steak, and for my main dish, the motsunabe! Many restaurants that offer motsunabe, including this one, serve it with soy sauce but I ordered the miso flavor since it was recommended by the staff. They have their original recipe for the miso which is made from more than 10 different kinds of miso of different ratios. 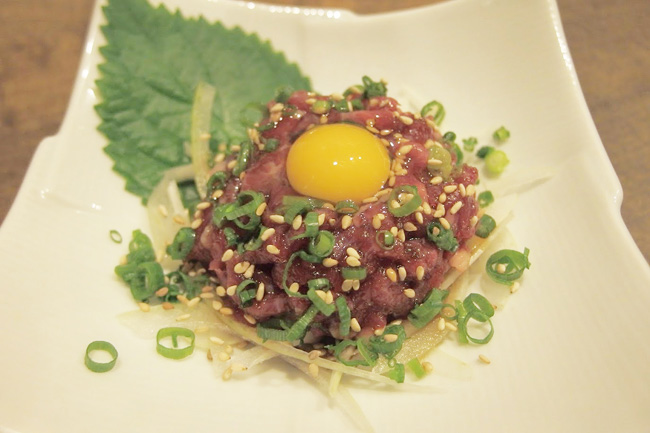 The raw horse meat yukhoe is a dish of minced raw horse seasoned with tare (Japanese dipping sauce) topped with an egg yolk. 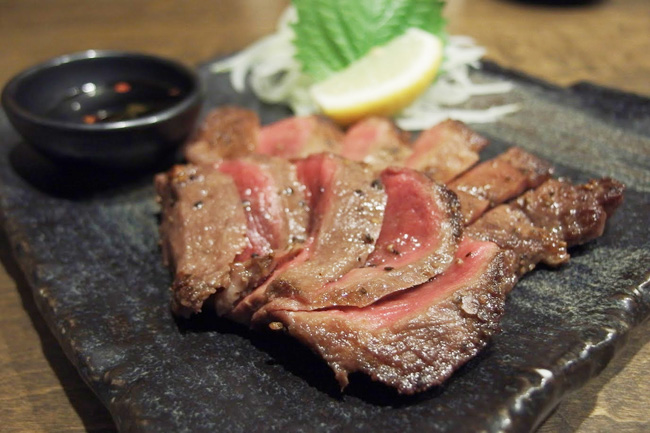 The domestic beef tongue steak was my favorite since it was grilled to medium rare and its tasty tare flavor made it more delicious. I heard that this is the popular dish among international guests.

The motsunabe has arrived! 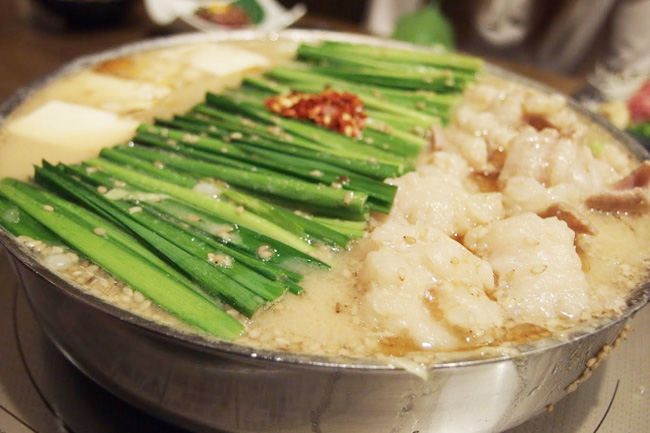 Finally, the main dish has arrived! While the staff were doing the final preparations for the motsunabe, the aroma of the garlic and miso was already making my mouth water. The motsu that is taken only from domestic beef looked very soft and tasty just by its appearance. I couldn't wait to eat it! Even though the dish took only about ten minutes to arrive, it certainly felt much longer. Ah, it is finally time to eat! 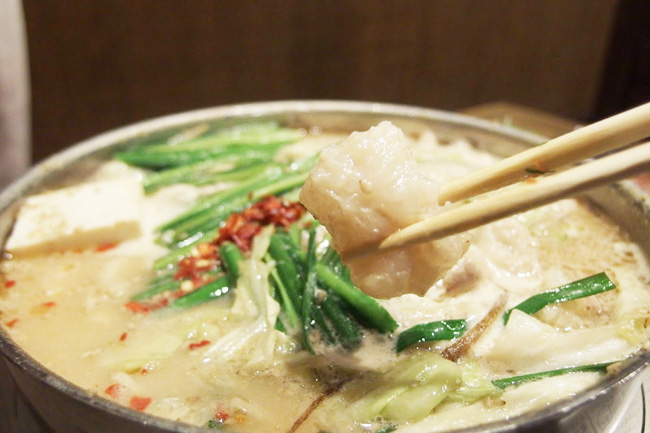 Can you imagine how soft the motsu is by looking at the picture above? As I take one with my chopsticks, I try my best not to drop it. It is even softer than I expected and its delicious flavor filled my mouth! It looks oily but it is not heavy in the stomach and I felt as if I could continue to eat forever. Additionally, I feel like it's a nice dish for ladies like me since motsunabe is healthy and good for beauty. Not only is the motsu rich in collagen, but the tofu and vegetables such as the leek, cabbage, and burdock, are nutritious too. I also repeatedly refilled my bowl with the tasty miso-flavored soup. I am so glad and satisfied that I ordered the recommended dishes.

At the end, there's a special ramen? 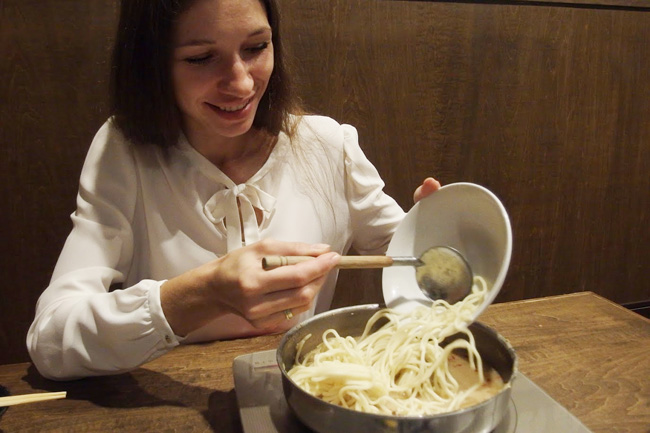 As I gradually filled my stomach, I heard that it is common in Japan to put champon noodles, which are a bit thicker than ramen, or rice into the leftover soup to enjoy the dish even more and not waste any part of it. So I took the champon noodles and put them into the pot to let it absorb the flavor of the soup with the meat and vegetables. I enjoyed cooking it by myself and of course, I finished off by eating the special noodles.

After my first motsunabe experience 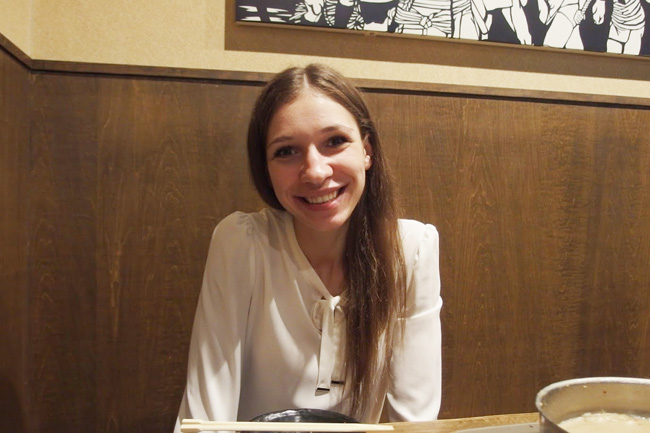 Every time I hear about my friends' motsunabe experiences, I thought that it could be worth a shot. But after finally trying it out on my own, the taste of the food and the ambiance of the restaurant really exceeded my expectations. Honestly, I was a bit hesitant and scared to eat offal at first, but it actually has a sophisticated flavor without any foul smell and its deliciousness is beyond verbal description. Moreover, even though I ordered the miso flavor, the restaurant I went to also offers the basic soy sauce flavor and the refreshing ponzu vinegar flavor, so I will definitely visit again to try those in the near future. Not only that, but as people say that there are a variety of other nabe dishes in Japan, such as the ones featuring angler fish and curry, I also want to experience as many different nabe as I can during my time here in Japan.

After reading about my experience, what do you think? Would you want to try the same dishes I tried, especially the motsunabe? Some might want to, while some might not. However you feel, I will leave you with one statement: I can proudly say that I have come to really love motsunabe!