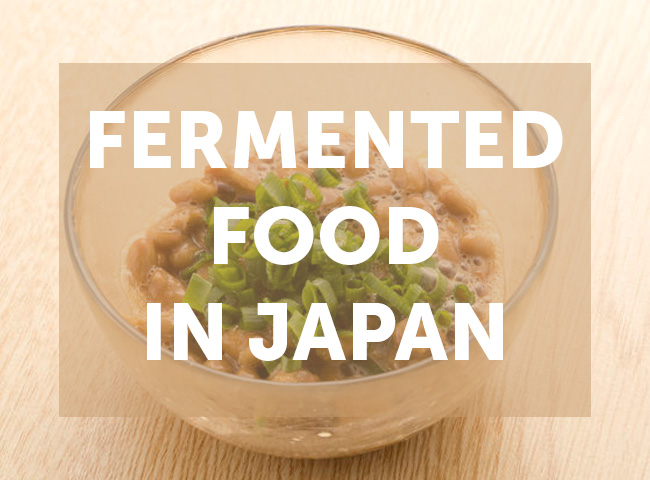 Fermentation has been used at a preservation technique in cuisines throughout the world since Neolithic times, producing everything from beer and wine to bread, yoghurt, pickles and vinegar. Not only does fermentation preserve food and add nutritional value, it alters the way a food looks and tastes, providing interesting new flavors and textures. Around the world, fermented foods have recently experienced a resurgence in popularity, possibly due to their recognized benefits to gut, brain and body health. In Japan - regarded as having one of the healthiest cuisines in the world - fermented foods have long been an essential part of the daily diet. Here are 6 of the most common types of Japanese fermented foods and their uses as snacks, condiments and food accompaniments. 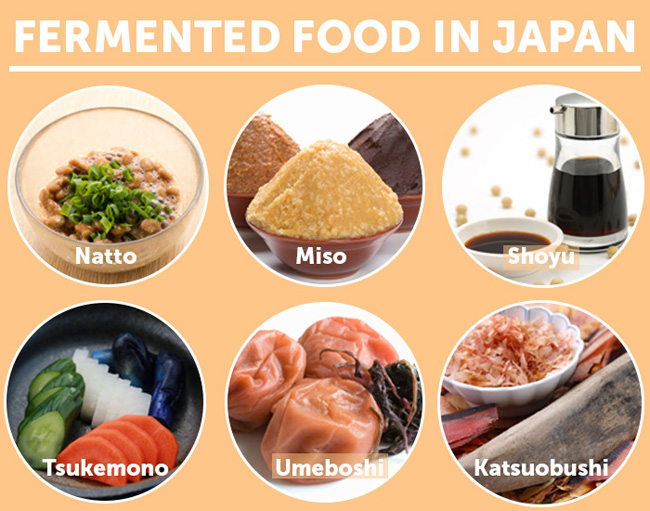 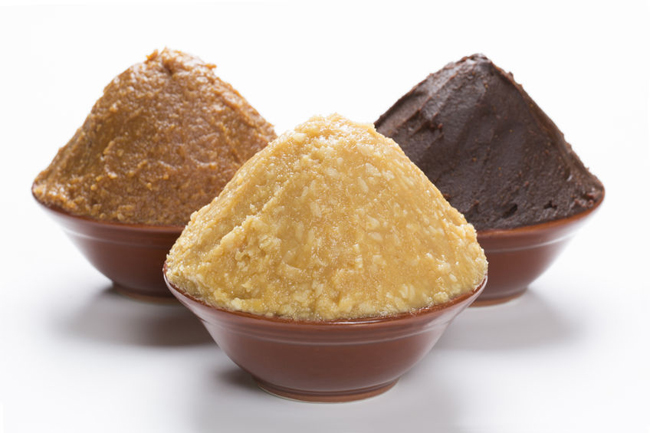 Miso is produced by fermenting soy beans or other legumes or grains with salt and koji mold. The list of health benefits of miso is extensive - high in protein, rich in vitamins and minerals, as well as antioxidants. The result is a thick, grainy, peanut-butter like paste with an intense salty flavor. Miso is the most ubiquitous of Japanese fermented foods, used in a myriad of ways in the local cuisine. Most commonly, mixed with water or dashi for miso shiru (miso soup) as a marinade for fish and meat, to add flavor to cooking and baking, to pickle dairy and vegetables, as a dip, and as accompaniment served with sake.

Miso is is divided based on color - red (akamiso) and white (shiro miso), but actually ranges on a spectrum of deep brown - almost black - to red, orange, yellow and cream. Miso typically has a salty, earthy flavor - but like the color, the flavor intensity and the saltiness is determined by the base ingredients, the type of koji used, and the length of fermentation. 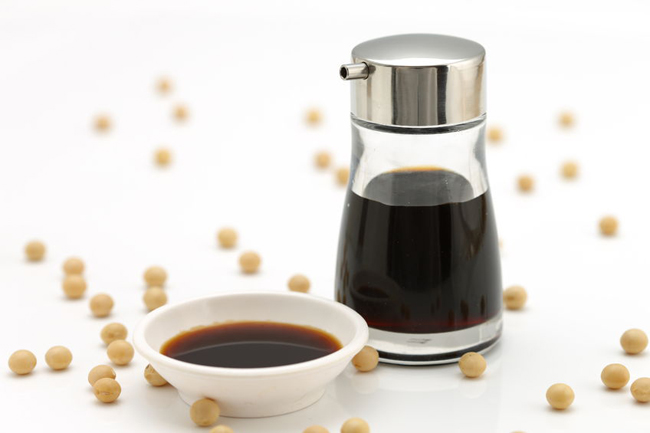 Along with sugar, salt, vinegar and miso, shoyu (soy sauce) is one of the five building blocks of seasoning in Japanese cooking, a timeless staple among Japanese fermented foods that is also the world’s oldest condiment. Salt has been used to preserve food products since ancient times, and the runoff from this preservation process was used as a condiments and as flavoring in cooking. This runoff from preserving soybeans was the early foundation of soy sauce, which was further refined over the last 2500 years, first in China and then Japan.

Soy sauce brewing starts with a fermenting mash (moromi), a mixture of steamed soybeans mixed with wheat, seed mold (aspergillus), salt and water. As it ages, enzymes naturally break down soybean proteins to produce soy sauce liquid. This liquid is pressed out, then undergoes pasteurisation. Altogether, this process takes at least 6 months.

Soy sauce is used both as a dipping sauce for sushi and fish, as an ingredient in other dipping sauces like tsuyu, and as a flavoring in almost all Japanese dishes whether raw, grilled or boiled - it’s so common as to be nearly “invisible” among Japanese fermented foods. Soy sauce’s well balanced components of sweet, salty, sour and savory brings out the natural taste of ingredients while balancing out fishy flavors. The fermentation process also provides it with antioxidants that aid digestion, making soy sauce both delicious and healthy. 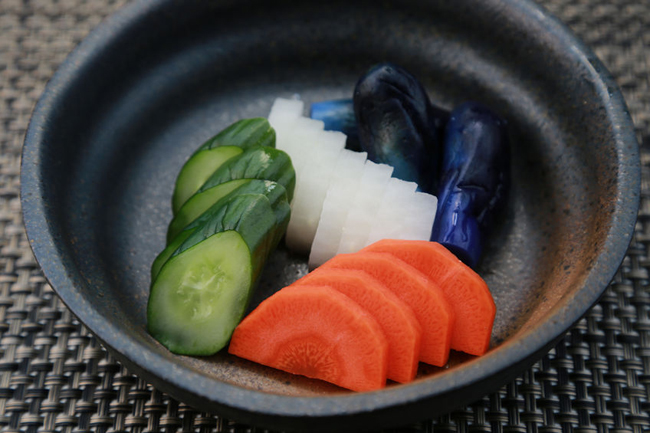 “Tsuke” means “pickled” in Japanese, and “mono” means “thing,” so tsukemono refers to a large variety of Japanese pickles, most commonly vegetables like cucumber, daikon, turnip, carrot and eggplant.

Vegetables may be pickled in vinegar, sake lees, miso, rice bran and salt among others, with each pickling method creating unique flavor characteristics. Vinegar pickles have a sharp, sour flavor, while sake lees pickles have boozy, floral notes. Miso is distinctively salty and earthy. Rice bran has a deep umami (savory) flavor and is a bit salty. Where other cultures add flavors to their pickles, such as spices like cloves, star anise herbs, Japanese pickles don’t traditionally have additional flavors. Tsukemono are typically eaten as a side dish to a meal, and as otsumami, a snack to have with an alcoholic drink. 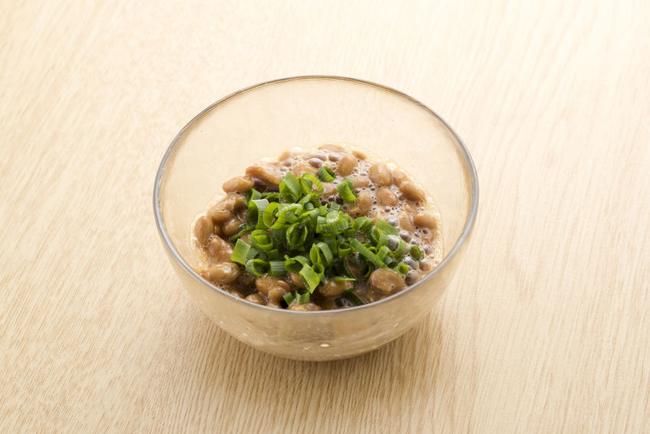 The intense, pungent flavor of natto makes it one of the most divisive of Japanese fermented foods among locals and foreigners alike. Those who enjoy it call the flavor ‘earthy,’ while those who don’t liken it to eating ‘old shoes.’ Adding to the challenging taste, natto is brown and very sticky, with an acrid smell.

Natto is soybeans fermented with Bacillus subtilis, which lives on rice straw. It’s exact origin are unknown, but was discovered by wrapping cooked soybeans in rice straw and leaving them. During this time, the bacteria from the straw causes the soybeans to ferment, making them soft and sticky.

The earliest written record of natto is around mid-11th century, but it’s likely they existed long before that. These days, commercial natto is made by using isolated cultures in a factory rather than by the traditional straw-wrapped method. Like many fermented foods, natto acquires many beneficial health properties during the course of fermentation. It’s high in protein, fiber, other nutrients, and produces enzymes, which reduce blood clotting and produce vitamin K and B.

Natto is eaten in various ways - it’s a common breakfast food, served with rice, a raw egg and karashi (Japanese mustard). It is also added to salads and cooked, used inside sushi rolls, and even appears in pasta. Its strong flavor can offset by pairing it with aromatic condiments like spring onion, ginger, wasabi, mustard. Despite how some people feel about it, natto remains one of the most popular Japanese fermented foods. 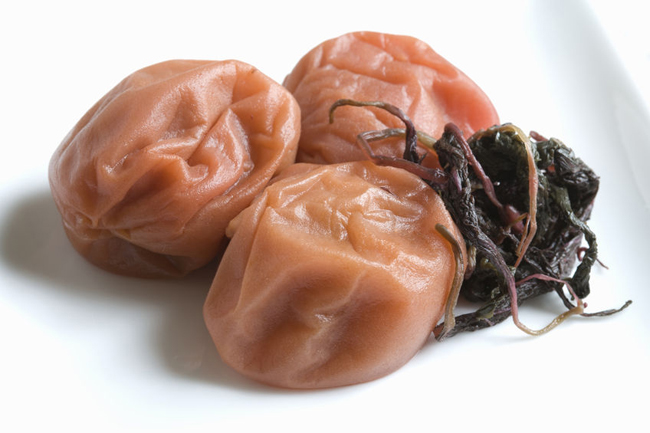 Umeboshi are beloved among Japanese fermented foods. These dried and fermented Japanese plums have a wrinkled, dusty-pink appearance and a flavor that packs a serious punch, intensely salty “shiokarai” and satisfyingly sour “shoppai.” And because they’re fermented, umeboshi are packed with vitamins and nutrients. It is rumored that umeboshi were eaten by samurai before going onto the battlefield to provide them with an energy boost.

Umeboshi are made via ‘lactic-acid fermentation’, one of the oldest methods of preserving food. Salt is added to the fresh ume to promote the formation of lactic acid bacteria. The salt draws out liquid from the ume, submerging the fruit in a brine that penetrates the flesh to preserve it. This lactic acid environment also inhibits the growth of undesirable microorganisms and enzymes. Plums are usually harvested in June, left to ferment until the end of July, and then dried on racks in the sun for 4-7 days.

Umeboshi is commonly found inside onigiri (rice balls), with meals, mashed and incorporating into dressings, in drinks with soda and shochu, and sold in individually wrapped portions at convenience stores. As with other Japanese fermented foods like miso and shoyu, umeboshi-flavored candy and snacks are also incredibly popular. 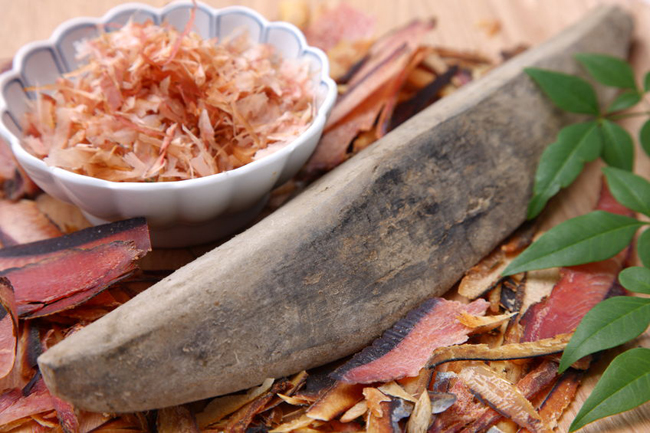 Those beige fish flakes with a deep umami and slightly smoky flavor, waving softly atop certain dishes as if alive, are katsuobushi, a staple Japanese ingredient. Katsuobushi is used to produce dashi, a stock that forms the base for many dishes, as well as a topping for many dishes, such as ohitashi, okonomiyaki, takoyaki, and salads.

As with many fermented foods, producing katsuobushi is a painstaking process. The head and internal organs are removed from the raw bonito katsuo (bonito fish), the fish is then filleted into 4 segments, which are boiled for around 90 minutes, cooled, deboned, and then have much of the skin and fat removed. Next, the fillets are repetitively wood-smoked and sun-dried, set then they are coated with a special mold and stored for about two weeks in a culture room. Finally, the fillets are dried again in the sun, and the mold is removed. This process is happens over several months.

The resulting fillets of katsuobushi have a water content of as little as 18%, and because of this, are packed with a rich umami flavor. Most commonly, the fillets are then shaved into various sizes and packaged for sale.

Whether to add flavor, to be eaten as a snack, or even to provide the base of the dish itself, fermented foods are essential to daily cuisine in Japan. Not only are Japanese fermented foods healthy, they’re tasty too - so be sure to try some tsukemono with your sake, or katsuobushi-topped okonomiyaki or miso soup to find out for yourself!