One unique aspect of Japanese culture is the giving of omiyage, or small souvenirs, upon returning home from a trip. Usually, Japanese travel gifts are a local food or specialty of the place visited, individually wrapped for each recipient. Omiyage are meant to serve not only as a memento to show friends and family you were thinking of them, but as a thank you to colleagues at work for any inconvenience you may have caused while you were away.

Thanks to this culture of omiyage gift giving, various regions of Japan have started marketing their own specialty foods and desserts for visitors to purchase, made with local ingredients and cooking techniques. Read on to learn about some of the most popular regional food souvenirs throughout Japan.

Wondering What to Buy in Japan? Regional Food Souvenirs! 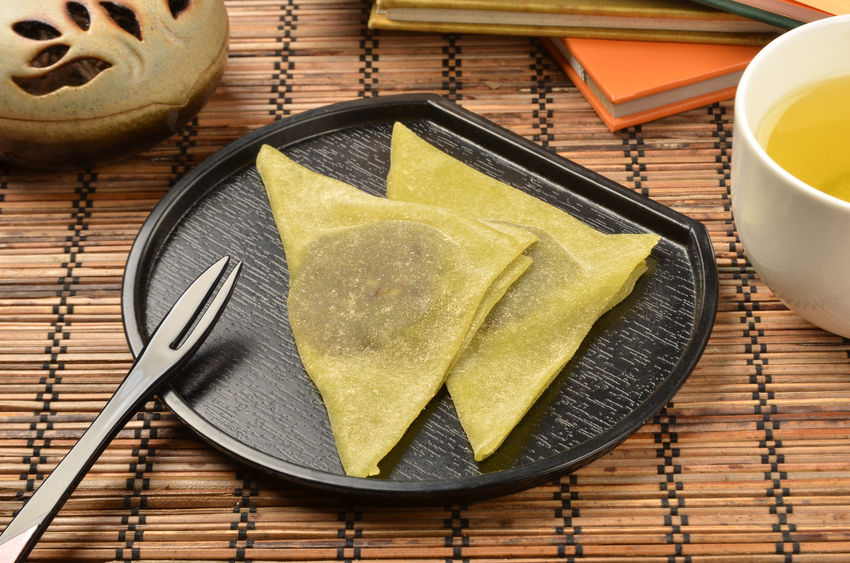 No visit to Kyoto is complete without trying, yatsuhashi, a traditional sweet that has been enjoyed in the area since the 17th century, and that is one of the most popular Japanese travel gifts. There are actual two styles of yatsuhashi: yatsuhashi senbei, a thin toasted rice cracker that’s flavored with cinnamon, and nama yatsuhashi, the unbaked version which became popular from the 1960s. Nama yatsuhashi is folded in a distinctive triangle shape and filled with a bit of sweetened adzuki red bean paste. The dough can be flavored with cinnamon like yatsuhashi senbei or with matcha, strawberry, and other flavors. 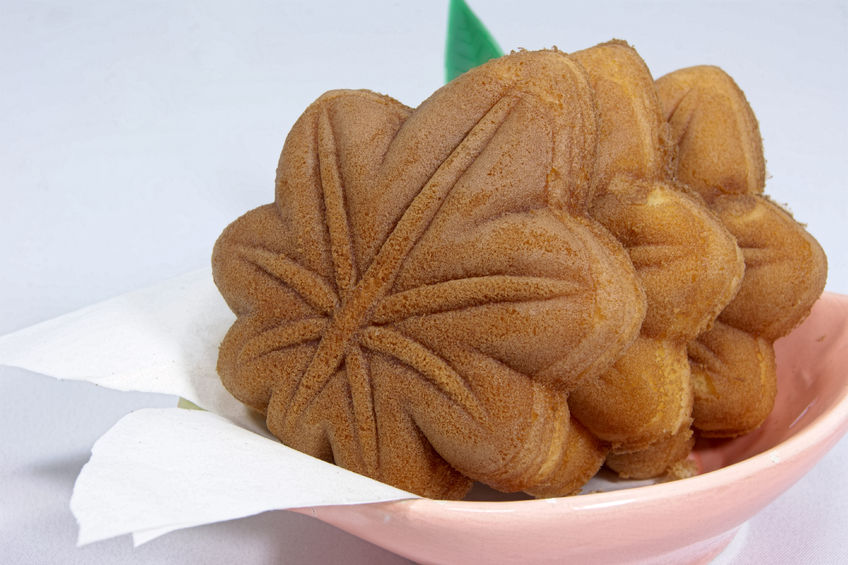 Momiji-manju is a type of wagashi, or traditional Japanese sweet, which comes from Hiroshima prefecture. It was created during the Meiji era for local ryokan inns to sell. Momiji-manju is made by filling a small castella cake with sweetened adzuki red bean paste. The maple leaf shape of the cake is inspired by Momijidani, Hiroshima’s “Valley of the Maple Trees”, where momiji-manju was first sold. Today this Japanese travel gift can be found in various places throughout Hiroshima. 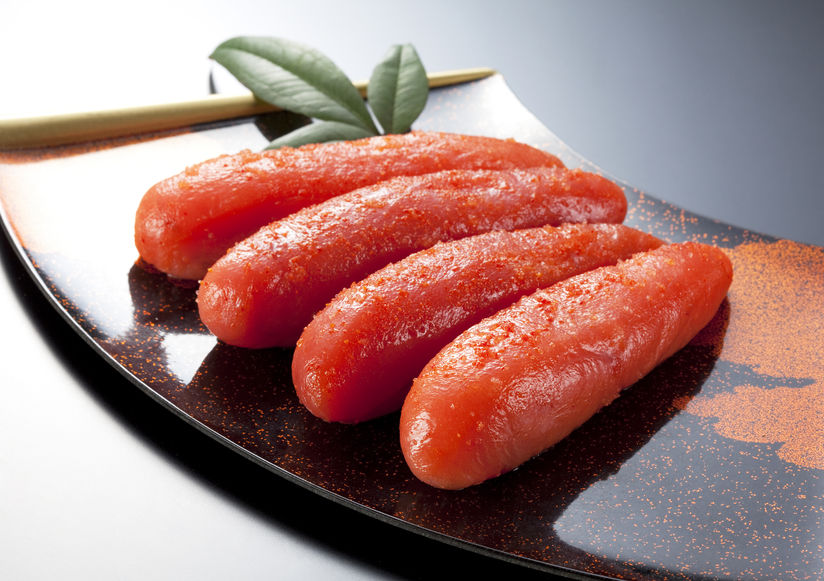 Mentaiko is a spicy salted pollock fish roe from Fukuoka prefecture in Kyushu. Mentaiko first came to Fukuoka via Busan, a port city in Korea, following WWII and the seasoning has been adapted for the Japanese palate. It’s commonly enjoyed with a bit of sake or mixed in with other dishes such as nabe hot pot or even pasta. Packaged mentaiko is a popular omiyage to pick up when visiting the area. 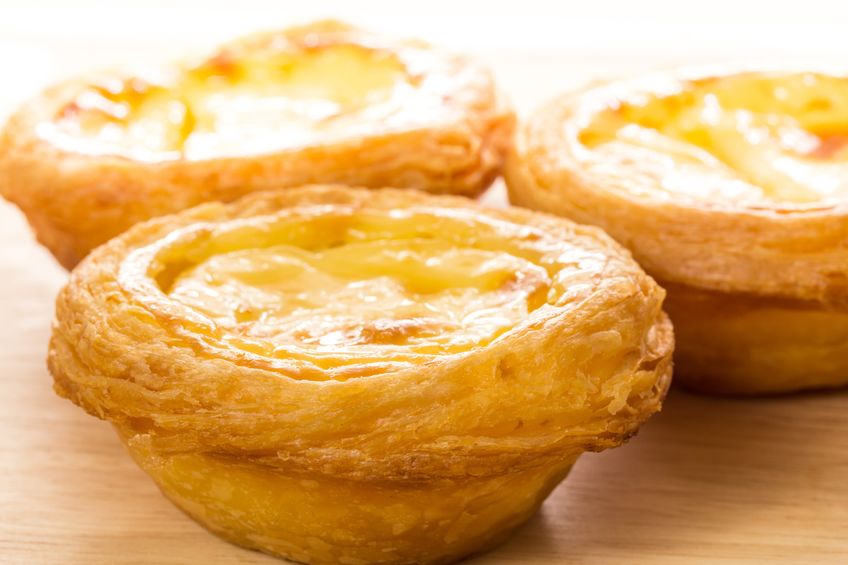 Hokkaido prefecture in the north of Japan is famous for its milk and cheese products, thanks to the wide expanse of agricultural land available for dairy farming. On your next trip to northern Japan, one omiyage to look out for is baked cheese tarts from Sapporo. The light cream cheese filling features a blend of three cheeses served in a pastry shell, and it can be enjoyed freshly baked, at room temperature, chilled, or reheated in a toaster oven. 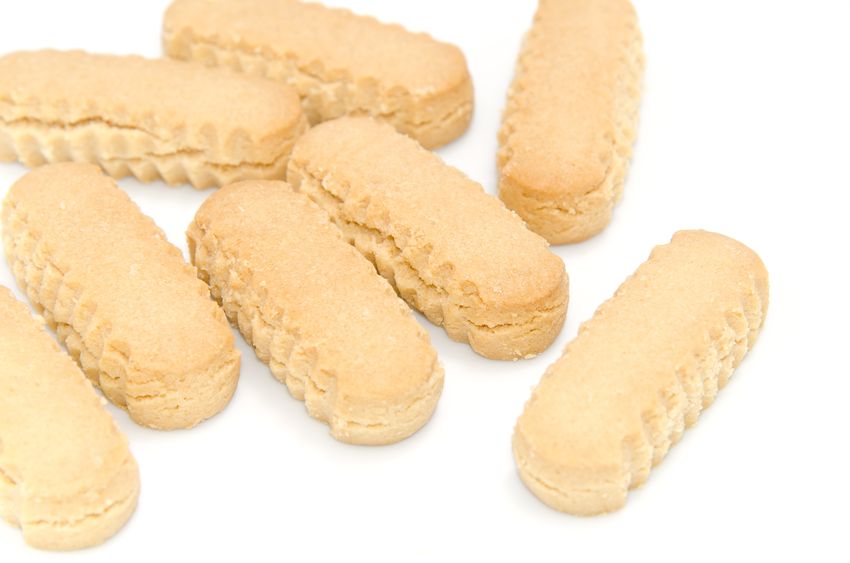 The islands of Okinawa are located to the southwest of Japan’s main island of Honshu and have their own unique culture that is quite different from the rest of Japan. One of the most popular food souvenirs to bring back from Okinawa is “chinsuko”, a type of salted shortbread cookie made with flour and lard. While salt is the most common variety, chinsuko also comes in other popular island flavors like mango, sweet potato, pineapple, and shikwasa citrus. 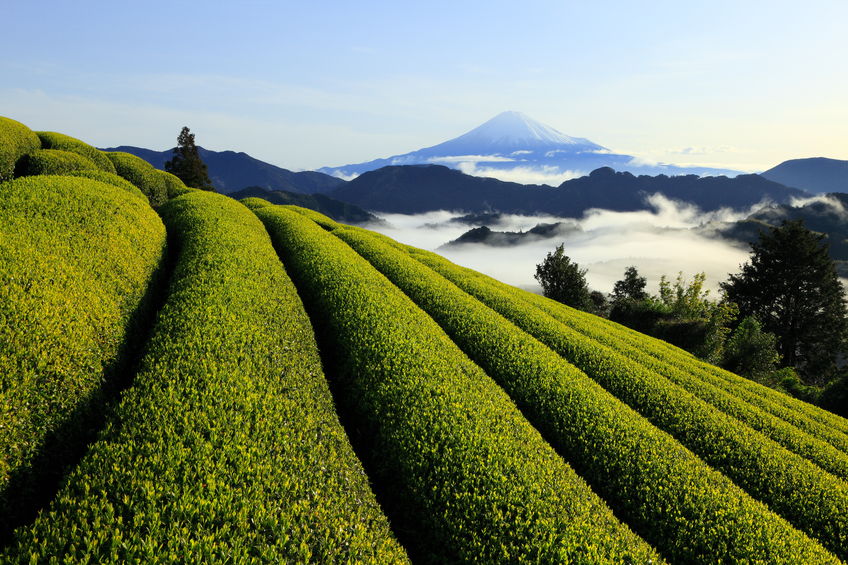 Some of the finest green tea in Japan is grown in Shizuoka prefecture, on the foothills of the Southern Alps. Green tea cultivation first came to the region during the 13th century, introduced by a local Buddhist monk who brought tea back from China to his hometown in Shizuoka. Today, Shizuoka prefecture grows around 40% of Japan’s green tea. Be sure to pick some for a regional food souvenir up on your next visit. 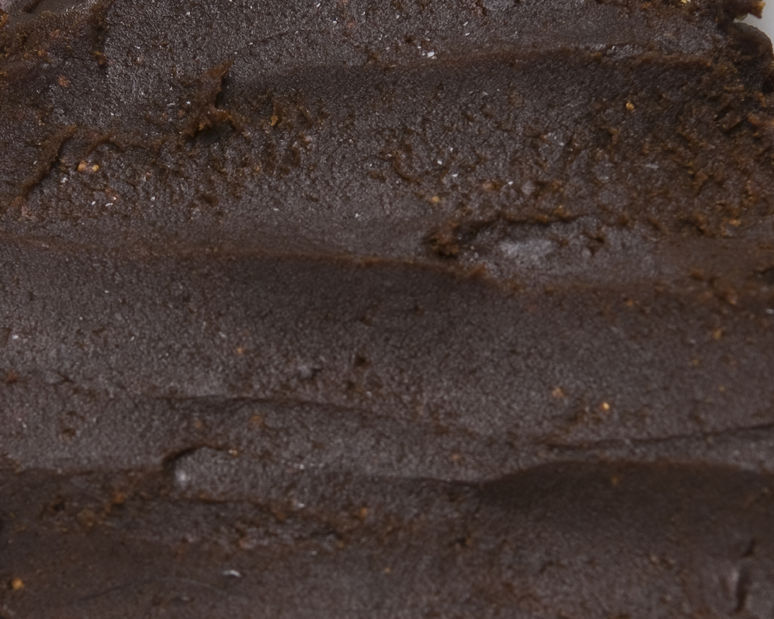 Nagoya, located in Aichi prefecture in Japan’s central Chubu region, is famous for its miso. The most popular variety from this area is hatcho miso, a type of red miso made only with soybeans and no grain. Hatcho miso has an intense and rich flavor, so it’s commonly used as a sauce for dishes like tonkatsu pork cutlet. A tub of hatcho miso makes a great Japanese travel gift for the culinary-inclined in your life. 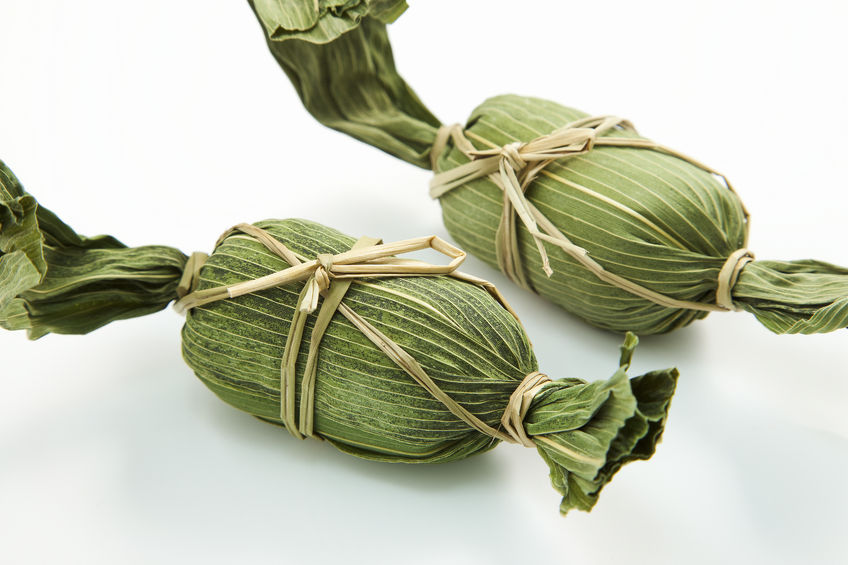 Sasa dango is a confectionary from Niigata prefecture, on the coast of the Sea of Japan. It’s a mochi rice cake made with mugwort herb that’s filled with adzuki red bean paste or kinpira root and wrapped in bamboo leaves and steamed. Traditionally, sasa dango was eaten during the annual Boys Festival in May, but now it’s enjoyed year-round and is a popular omiyage to pick up in Niigata. 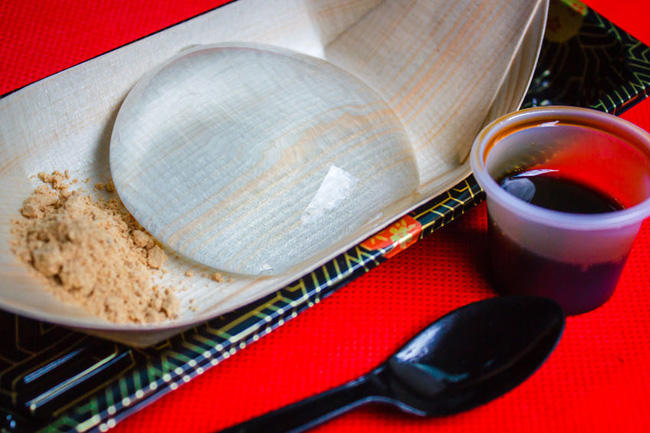 Shingen mochi is an omiyage from Yamanashi prefecture that was created to capture the history and flavors of the region. This wagashi sweet features small mochi rice cakes covered in kinako (toasted and ground soy bean powder), over which kuromitsu (brown sugar syrup) is poured. It’s based on a traditional mochi cake that has been eaten in Yamanashi prefecture since ancient times. The packaging for Shinsen mochi also features traditional Yamanashi textile patterns. 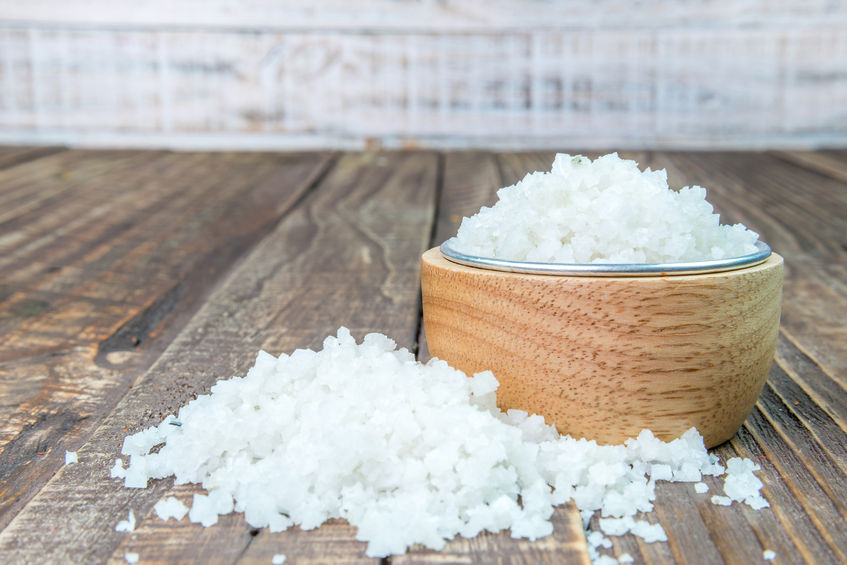 Kanazawa is the capital of Ishikawa prefecture, located on the central coast of Japan’s main island of Honshu, facing the Sea of Japan. While the city is best known for its delicious fresh sushi, it could be difficult to bring home a meal of fresh sushi as a souvenir from Kanazawa. One excellent local alternative then is sea salt from Ishikawa prefecture’s remote Noto Peninsula. The salt is extracted from the sea using salt pans in a traditional and highly labor-intensive process. The result is a mild-flavored sea salt that tastes of the ocean and is said to have a higher mineral content than regular manufactured table salt.

Nara, located in the western Kansai region of Japan, is one of the oldest prefectures in Japan and was home to the country’s ancient capital in the 7th to 8th centuries. The region contains more UNESCO World Heritage sites than any other, including temples, shrines, and ancient tombs. One popular omiyage to bring home from a visit to Nara is kakinoha-zushi, a type of sushi preserved in a persimmon leaf. Because Nara is located inland, historically, fresh fish wasn’t readily available in the region. Salmon, mackerel, and trout were preserved in salt with rice for transportation and wrapped in a persimmon leaf, which has antibacterial properties and instills a particular aroma and faint flavor onto the sushi. Today, this bite-sized preserved Kakinoha-zushi is a delicacy that can still be enjoyed in Nara and brought home as omiyage.

If you’re wondering what to buy in Japan during your travel, regional food omiyage are the perfect option. They are great way to sample specialty local foods while traveling throughout Japan, and to bring back a taste of the places you visit to your friends and family back home. Be sure to look for these omiyage and more on your next visit to Japan.