Christmas in Japan: Where Santa, Cake, and Chicken Collide

Christmas in Japan: Where Santa, Cake, and Chicken Collide

What does “Christmas” mean in Japan? The winter holiday isn’t officially recognized by the government but is rather a social event adopted from the Western countries of its origin. To understand how it’s viewed in Japanese culture, the best comparison is to consider how Christmas and New Year’s Eve are celebrated in the West and then flip them—in other words, Christmas in Japan is a time for friends and significant others while New Year’s Eve is a time for family gatherings. And while many of the traditions like Christmas trees, presents, and Santa Claus have found their way into Japanese homes, the country has developed many customs that aren’t found anywhere else in the world.

A Brief History of Christmas in Japan

Christmas in Japan has come in and out of favor over the centuries. The holiday first found its way to the islands when Christianity was introduced in 1549. However, in 1614 it was banned by the shogunate along with all other Christian traditions. Christmas once again found its way into the culture in the 1870s as part of the religious freedom movement during the Meiji Restoration, but again faded out during WWII. After the war, Christmas was reintroduced, gaining widespread acceptance with the introduction of the Christmas cake and Colonel Sanders (more on that later).

How Does Japan Celebrate Christmas? 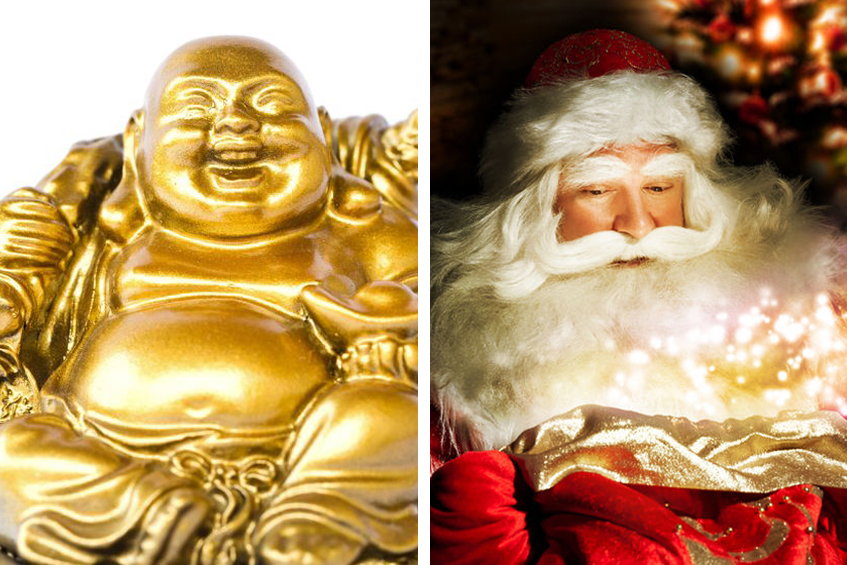 Immediately following Halloween, the seasonal shelves of department stores and supermarkets make the switch from giant spiders and pumpkin decorations to Christmas trees and Santa Claus. The introduction of Father Christmas to Japan’s holiday customs has been smooth, largely because of his similar appearance to the serene, pot-bellied god Hotei—one of Japan’s seven lucky gods—who much like Santa Claus, carries a large bag that in some tales is filled with gifts. 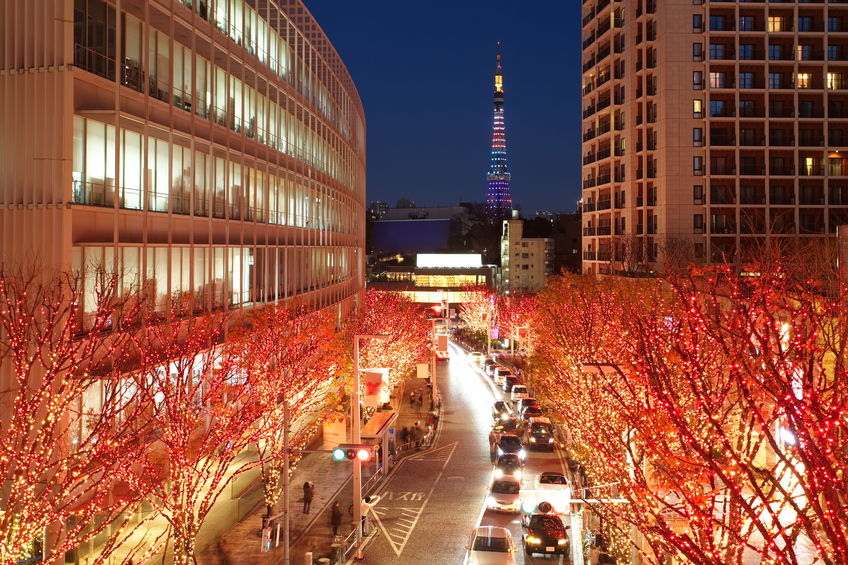 While most homes don’t have a Christmas tree to decorate, it’s likely that families and couples living in Japan’s metropolitan areas are within easy access to one or more Christmas illuminations. These extravagant lighting displays are a communal way to enjoy the spirit of Christmas and are the quintessential spot for romantic dates. While illuminations left much to be desired in earlier decades, projection mapping has become a recent trend, creating grand displays that often synchronize millions of LED lights. They can typically be enjoyed from mid-November through February. 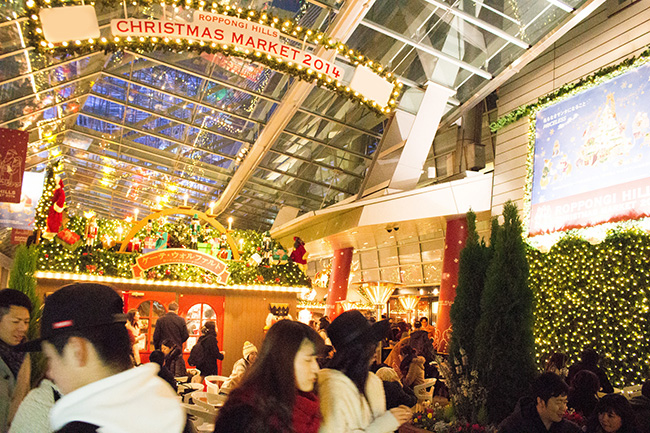 Christmas markets are another must for couples in Japan. They are generally presented in the European style with food like fruitcake, stollen, pretzels, and sausages as well as mulled wine available for purchase. 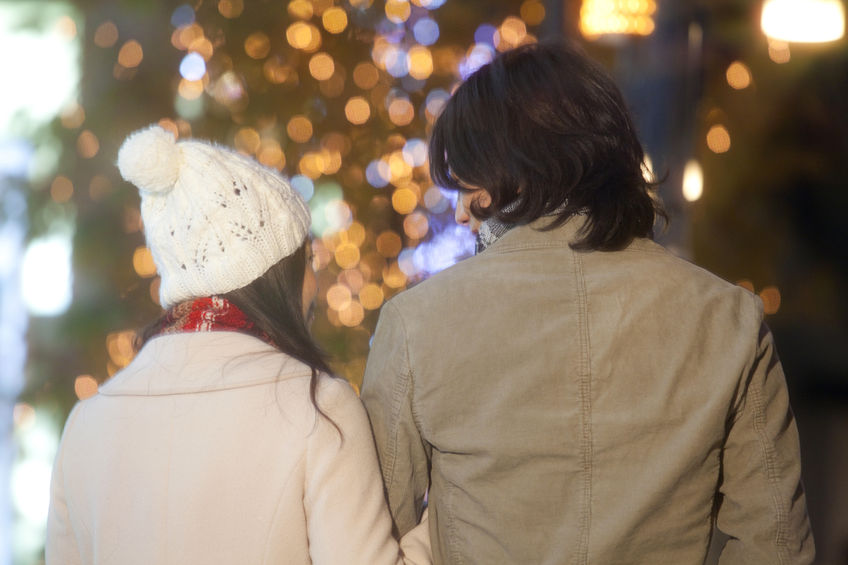 Much like Valentine’s Day in Western countries, the days leading up to Christmas Eve are a time of excitement as the day before Christmas is considered one of the most important date nights of the year. This is also the night most single people dread, with some restaurants actually banning couples to accommodate single people and their friends. A typical Christmas Eve date night usually consists of illuminations, Christmas markets, presents, and a Christmas meal.

What exactly is “Christmas food” in Japan? The short answer is chicken and cake, but there’s more to it than just that. Here are the top four Christmas indulgences you’ll likely encounter during the “most wonderful time of the year.” 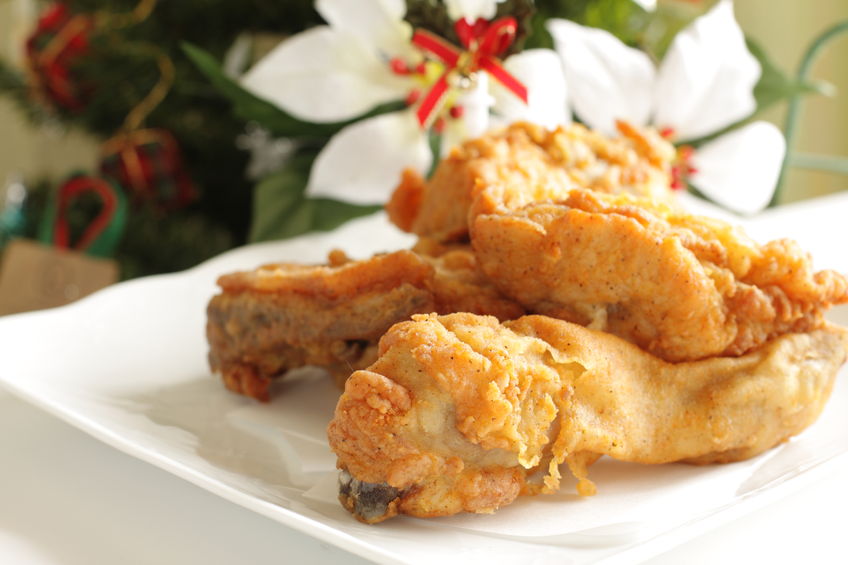 Ask a Japanese person why take-out chicken is the quintessential cuisine of Christmas and the answer may be either 1) not having an oven (a common occurrence in Japanese homes) or 2) a lack of fridge space to store a fully roasted turkey. While both of these are logical answers, the real reason for the country’s love of fried chicken on Christmas is simply a successful 1970s marketing campaign that chickens were in essence a smaller version of the ubiquitous Christmas turkey. This custom has since become so popular that it’s not unheard of to make a reservation weeks in advance. While fried chicken is the go-to meal, recent years have shown rotisserie chicken and whole roasted chicken to be growing in popularity. 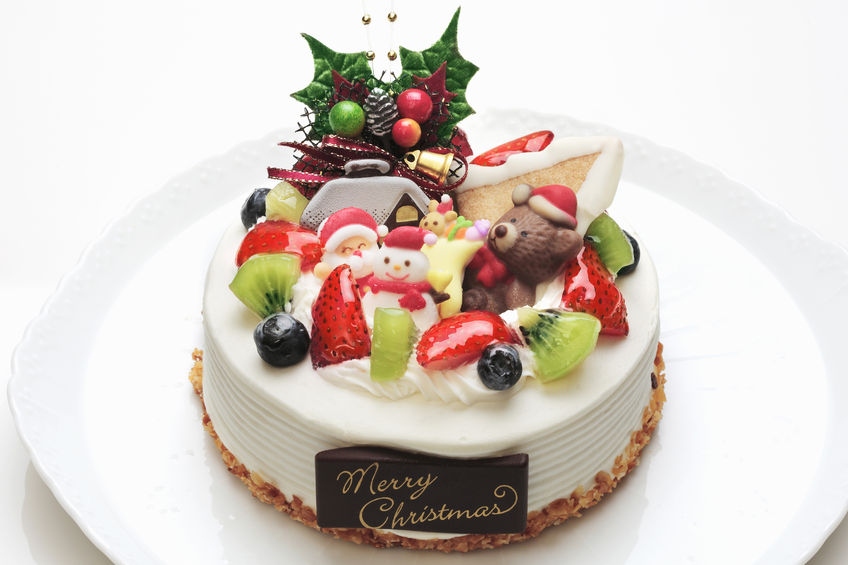 Strawberry shortcake may seem like an unlikely candidate for being the official dessert of Christmas, but for the Japanese people it’s quite logical—the official colors of Christmas are red and white, which also happen to be the colors of strawberries and whipped cream. Much like Christmas chicken, it’s important to pre-order the cake as far ahead as possible as the price reaches its peak on Christmas day, falling to half price the day after. 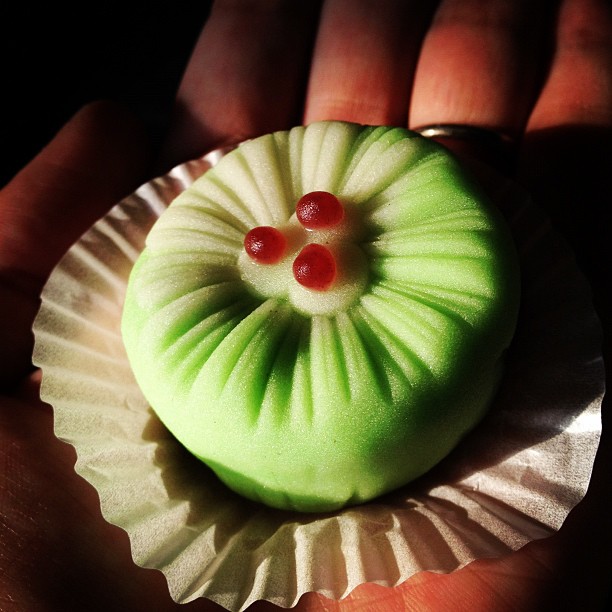 For those who don’t enjoy strawberry shortcake, another popular indulgence is Christmas wagashi, or Japanese-style sweets decorated with holiday flair. Traditional Japanese pâtissiers are masters of their craft, and around Christmas time you can see rows and rows of small confectioneries that are almost too beautiful to eat.

Apart from mulled wine found at Christmas markets, another popular Christmas night tradition is savoring a soothing cup of warm sake called “kanzake” to help calm your stomach after a full meal of fried chicken and cake.

The Shared Traditions of Christmas

So, what does “Christmas” really mean in Japan? While many of the customs described above are unique to Japanese culture, the holiday does maintain many of Christmas’ hallmarks shared the world over—family, festivities, and food. And once the presents have been unwrapped and the leftovers stored in the fridge, it’s time for many Japanese families to begin planning the most important winter holiday of the year—New Year’s Day. You can learn more about Japan’s traditional New Year’s feast with ourEssential Guide to Osechi Ryori.