Ramen is one of the best-known and most popular Japanese foods around the world. There are four major types of Japanese ramen, decided by the tare, or base flavor: shio (salt-based ramen), shoyu (soy sauce-based ramen), miso (soybean paste-flavored ramen), and tonkotsu (pork bone broth ramen). While it’s possible to find any of these ramen flavors pretty much anywhere you go in Japan, different areas have become known for their own unique regional variations. Read on to learn all about some of the most famous and satisfying regional styles of ramen in Japan. 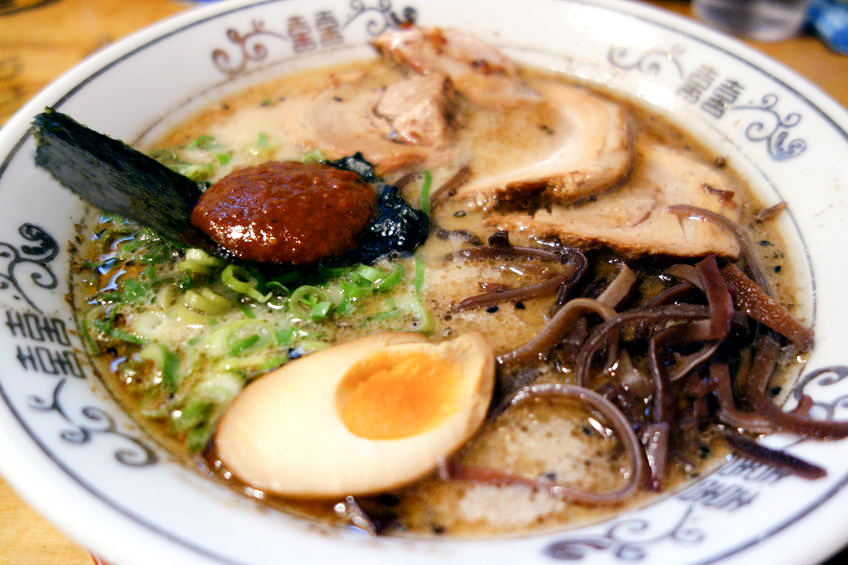 Sapporo, the capital of Japan’s northernmost prefecture of Hokkaido, is known as the birthplace of miso-style ramen. Miso ramen is so popular among locals, in fact, that the city has not one but two ramen “alleys”: Ganso Ramen Yokocho and Shin Ramen Yokocho. To make this local specialty, fragrant soybean paste is sauteed together with ginger and garlic and mixed together with pork broth for a hearty bowl of ramen that hits the spot on even the coldest winter days. Toppings include roasted chashu  pork, bamboo shoots, and bean sprouts. You can also request to add corn and a creamy pat of butter, two local Hokkaido specialty products.

Read: 10 Things to Eat in Hokkaido 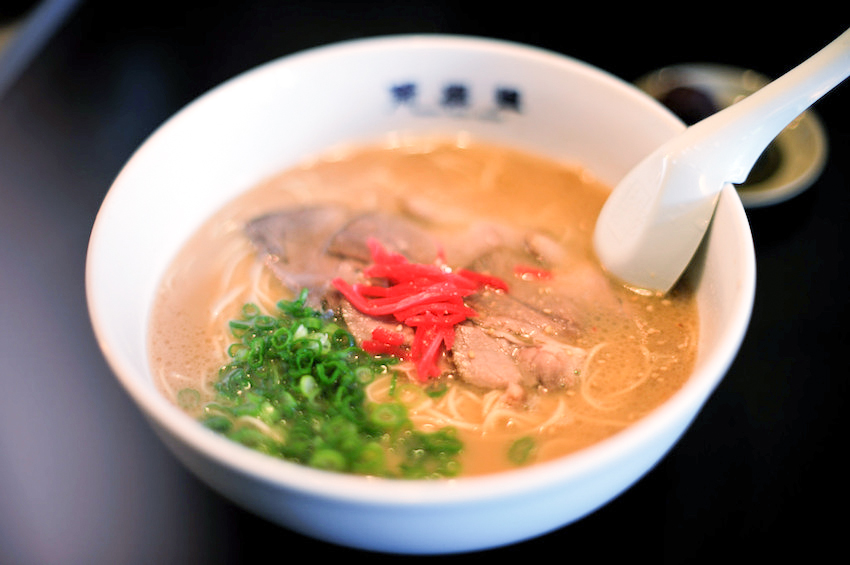 Tonkotsu ramen from Hakata (modern-day Fukuoka) is a unique style of ramen made from pork bones boiled at a high temperature until they release their collagen, creating a rich and milky broth that’s cut with seafood stock. The ramen is served with thin straight noodles cooked to just under al dente and topped with thick slices of roasted pork, garlic, sesame seeds, and pickled ginger. If you finish the noodles quickly, it’s common practice to order a second helping, called kaedama. Although tonkotsu ramen originated in Kyushu, it has spread all throughout Japan and to many countries around the world. 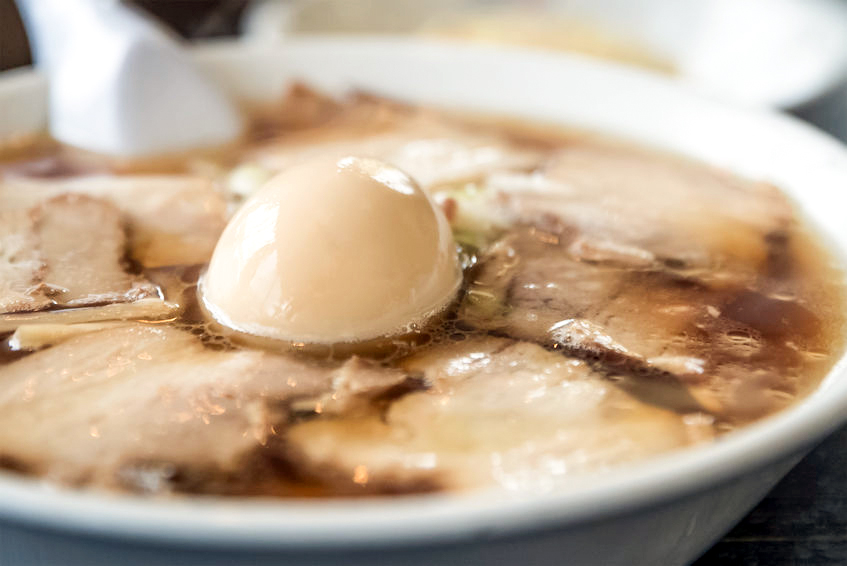 Known for its hand-cut noodles, the Kitakata area of northern Fukuoka specializes in ramen made with fat, wavy egg noodles. It’s served in a shoyu (soy sauce) based soup together with simple toppings: a few pieces of chashu pork, bamboo shoots, and a piece of naruto, a fish cake with a spiral of pink and white color. Although the ingredients may seem fairly basic, a bowl of Kitakata ramen fits many Japanese people’s quintessential image of what ramen looks like. 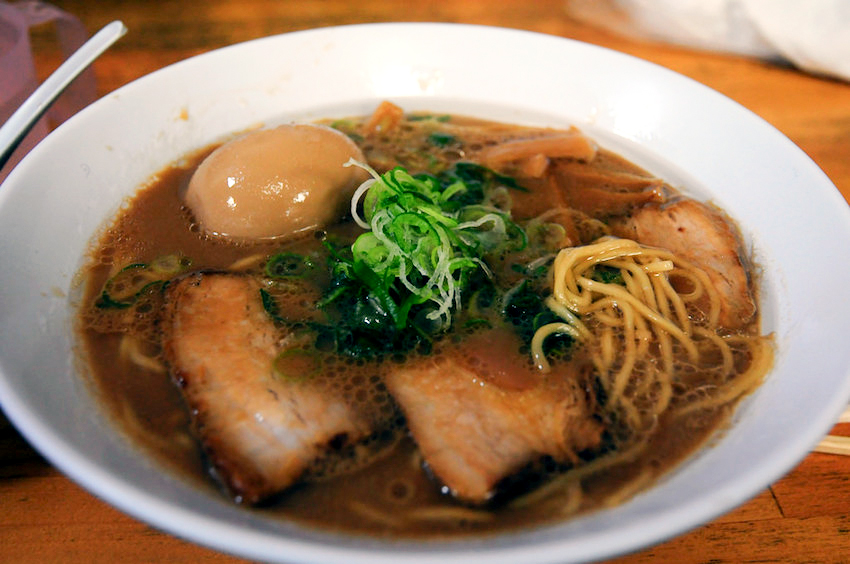 In Wakayama prefecture, it’s common practice among the locals to ask for chuka soba, or “Chinese-style noodles”, rather than ramen. You’ll get a bowl of tonkotsu-shoyu ramen that blends together the pork bone broth popular in western Japan and the soy sauce-based ramen broth popular in eastern Japan. The noodles are thin and stick straight, similar to Hakata ramen, and topped with a generous helping of scallions as well as a slice of the pink-and-white naruto fish cake that usually comes with shoyu ramen. It’s also common to have your ramen here with a side of haya-zushi, a traditional Kansai-style pressed sushi made with pickled mackerel. 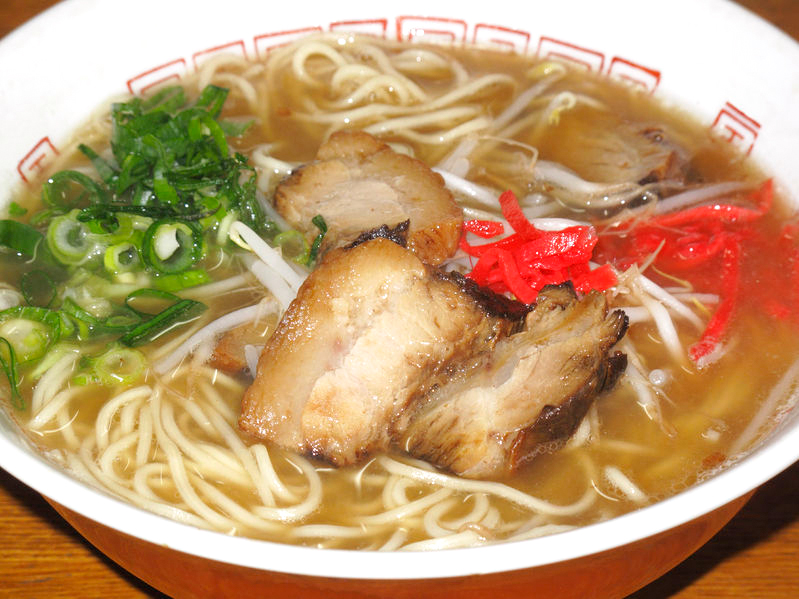 Onomichi is a seaside town in Hiroshima prefecture located on the Seto Inland Sea, so it should come as no surprise that their regional style of ramen is made with fresh local seafood. The shoyu-based broth also contains chicken and a bit of pork, but the real star of the show is the layer of rich pork back fat suspended on top, giving it a punch of flavor. Hundreds of people a day feverishly line up at the town’s numerous ramen shops for a taste of Onomichi ramen. 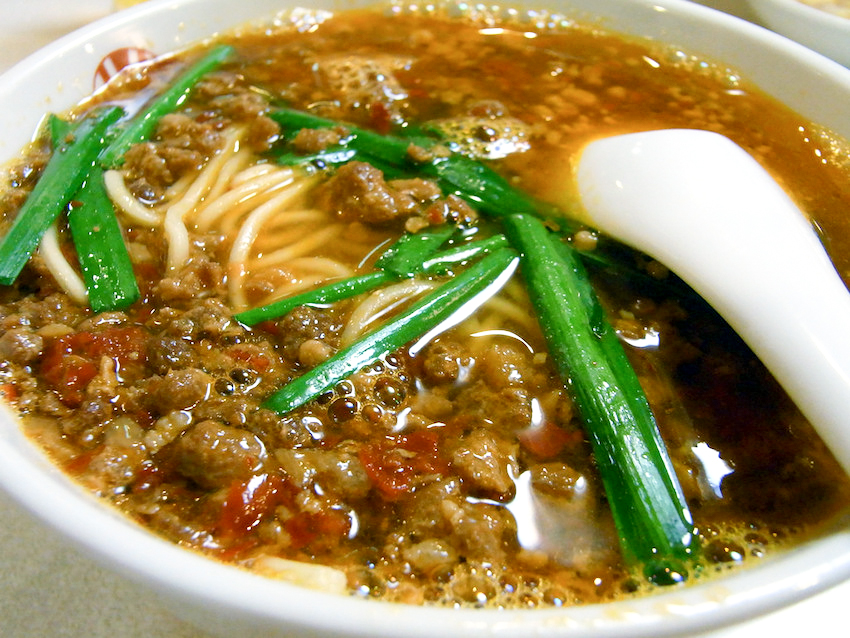 Despite its name, “Taiwan ramen,” Nagoya’s local style of ramen isn’t a direct import from Taiwan, although it is inspired by Taiwanese cooking. It’s named for the Taiwanese chef who invented the dish based on Taiwanese danzai noodles. Taiwan ramen features ramen noodles in a shoyu broth topped with spicy ground pork and nira (garlic chives). The dish pre-dates the spicy food trend in Japan, but its popularity has held strong and fast over the decades! 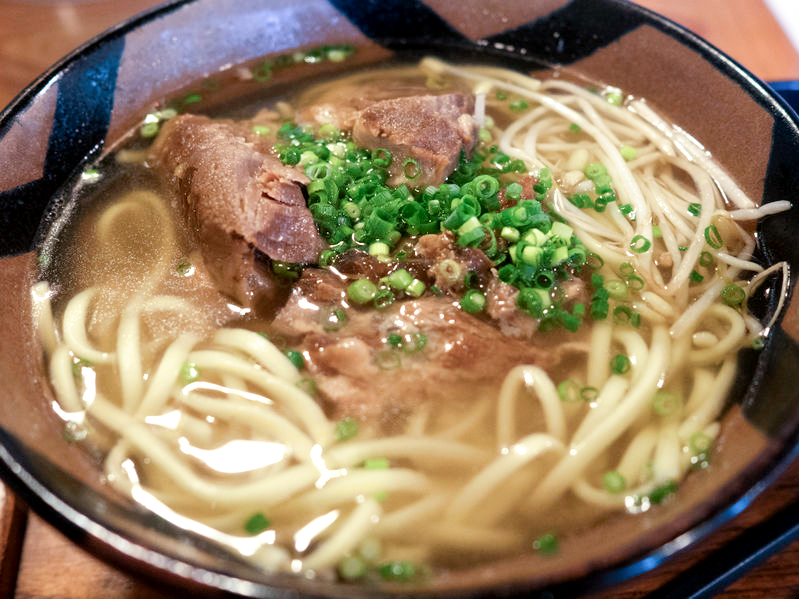 Okinawa, the chain of islands off the southwestern tip of Japan, was once an independent archipelago separate from the rest of Japan known as the Ryuku Kingdom. Ryuku had its own distinctive language, culture, and food, including its own style of ramen referred to as “Okinawa soba”. The noodles themselves, while called “soba”, are actually more similar to udon flour noodles but are served in a ramen-style broth made with pork, bonito fish flakes, and kelp. Okinawa soba also uses unique toppings compared to other styles of ramen, including bone-in pork rib and pig trotters. 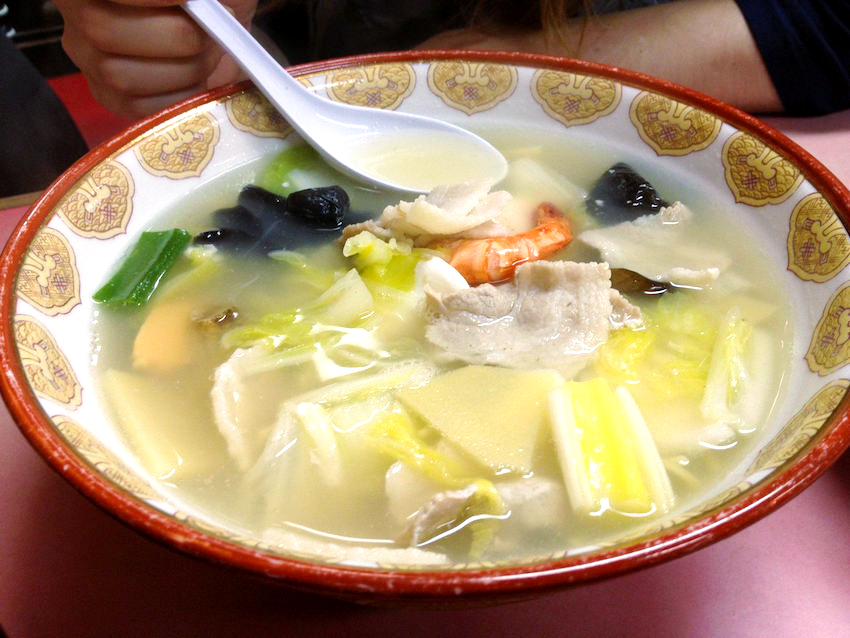 Hakodate, a port city in Hokkaido, is considered the home of shio, or salt-based, ramen. The clear soup broth is made with chicken, pork, seafood, and kelp served with straight noodles cooked until tender. Although shio ramen is no saltier than shoyu ramen, it has a slightly different flavor profile to shoyu ramen with a cleaner, lighter taste that allows the chicken, pork, and seafood flavors to come through. 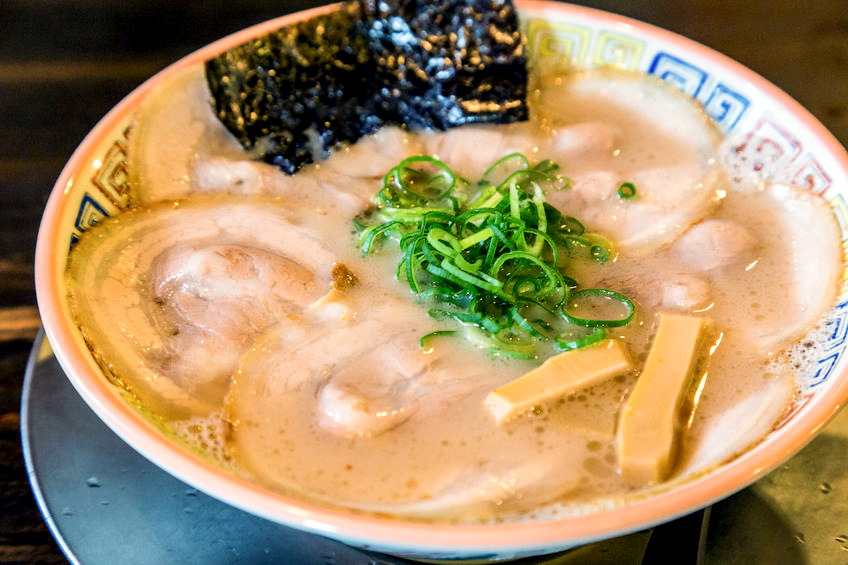 Kurume ramen is the original style of Kyushu ramen that predates even the highly popular Hakata tonkotsu ramen. Ramen from the Kurume City area also uses a tonkotsu pork bone broth, but one that’s even richer and heavier than Hakata ramen with an even stronger pork aroma. 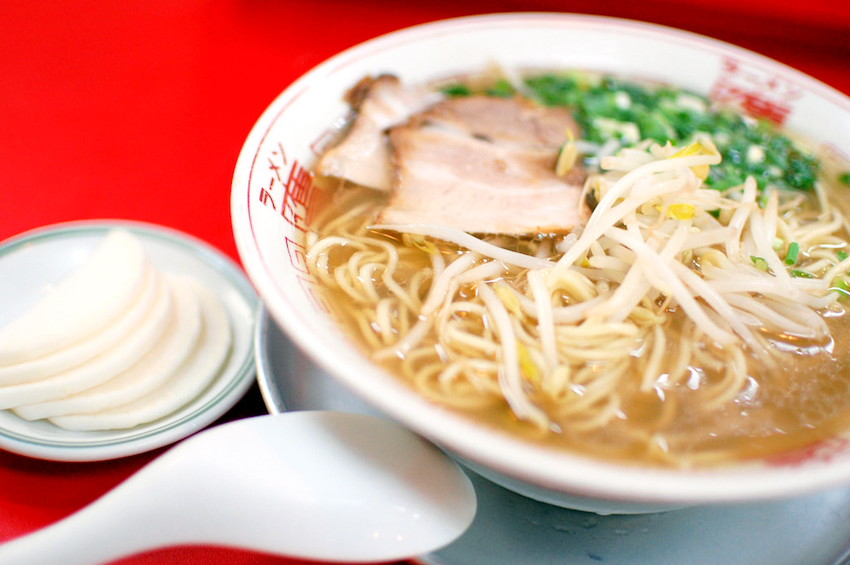 Kagoshima is the only place in Kyushu that wasn’t influenced by Kurume City’s heavy tonkotsu ramen. Instead, the ramen here uses a blended broth of pork, chicken, dried sardines, vegetables, and dried shiitake mushrooms topped with scorched scallions. The cloudy soup has a mild flavor that is quite distinctive from other Kyushu-area ramens. 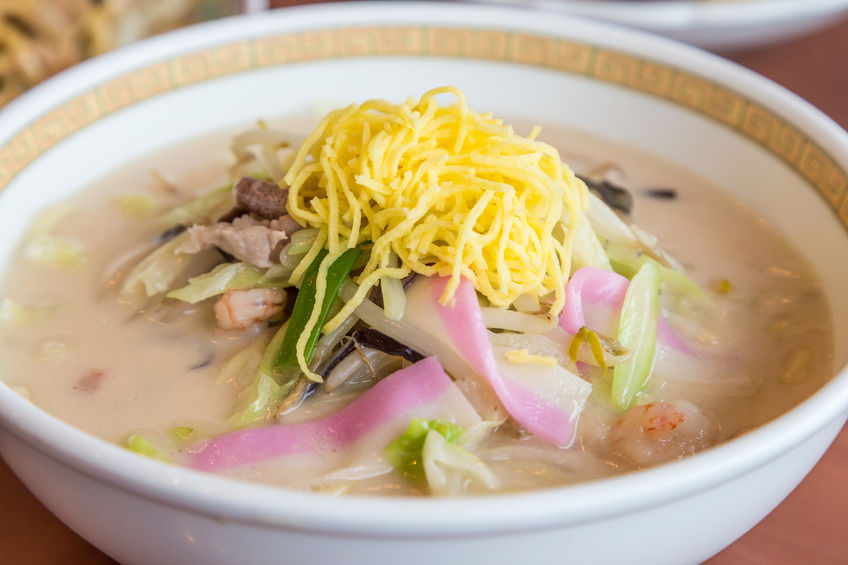 Although not specifically a type of ramen, champon is a regional dish from Nagasaki made with thick egg noodles that’s very similar. The noodles are cooked directly in soup, along with meat, vegetables, and seafood. Champon originated as a budget food for Chinese students studying in the Nagasaki area and fuses together Chinese and Japanese food cultures.

Regional Ramen Flavors Have a Unique Taste for Every Place

While visiting, be sure to try the local style of ramen wherever you go. Japanese regional cuisine is a great way to get a taste of the local culture—and who knows, you may just discover a new favorite type of ramen! Check Gurunavi’s restaurant listings for the best guide to regional ramen in Japan. Itadakimasu!