How to Eat at Kaiten-Sushi (Conveyor Belt Sushi) Restaurants

How to Eat at Kaiten-Sushi (Conveyor Belt Sushi) Restaurants 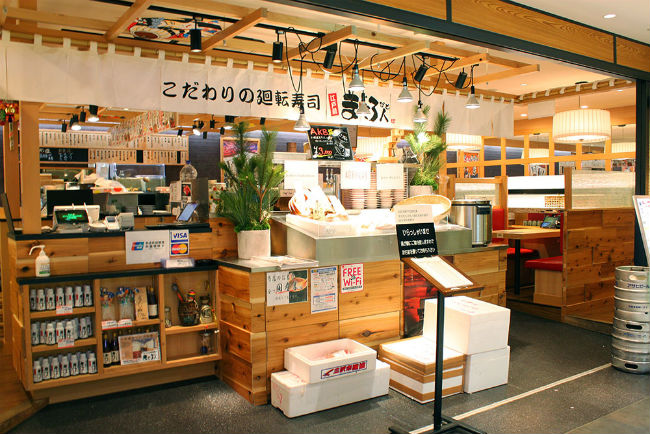 Kaiten-sushi is a fast-food style of sushi from Japan, where plates of sushi revolve around the restaurant on a conveyer belt. Called “kaiten-zushi” in Japanese, the name literally means “rotating sushi”. This is different from conventional sushi restaurants, where customers usually sit at the counter across from the staff and order their sushi directly. It was first invented so that sushi restaurants could serve more customers quickly with fewer servers. Outside of Japan, kaiten-sushi is sometimes referred to as a “sushi boat” or “sushi train”, as some establishments serve their sushi on small floating boats or miniature train carriages rather than just on a conveyor belt. 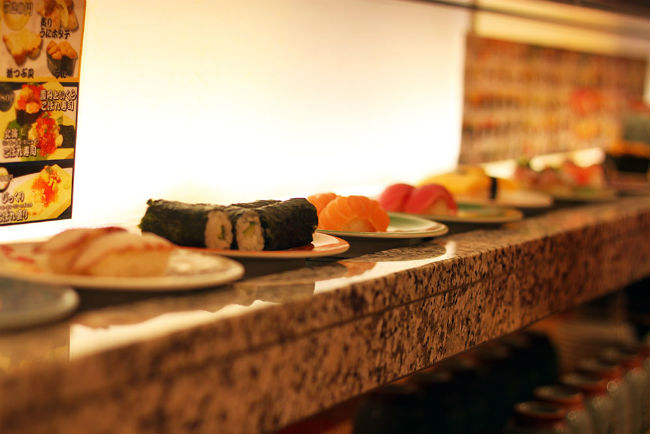 Even as a relatively “fast” food, thanks to the high quality of seafood and skills of sushi chefs in Japan, fresh and well-made kaiten-sushi can be enjoyed for relatively cheap prices, which explains its high level of popularity throughout the country. Its great popularity comes from its low prices, and long lines of customers can often be seen in front of kaiten zushi restaurants that offer delicious, fresh, and cheap sushi. Kaiten-sushi is frequented by everyone from university students trying to save money, to office workers looking for a quick meal, to friends or family who want to enjoy sushi in a less formal dining environment.

As the fast-paced atmosphere and unique serving style at kaiten-sushi restaurants can be rather confusing for first-timers, here’s a guide to everything you need to know about eating kaiten-sushi in Japan.

Your 101 Guide to a Kaiten-Sushi Restaurant Experience 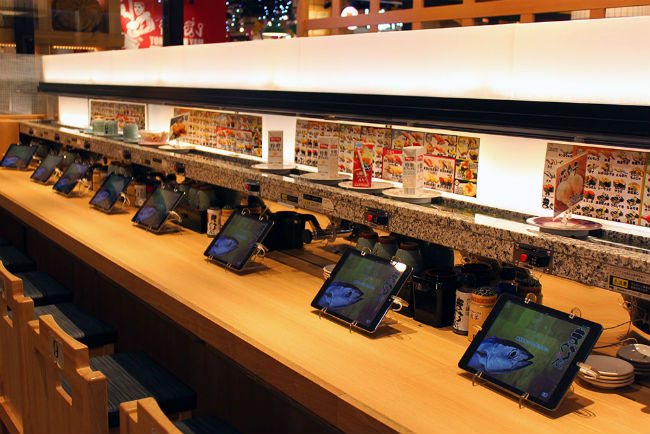 Kaiten-sushi is a casual style of dining that doesn’t typically require a reservation, although more popular restaurants may have long lines. If there’s a line, look for a staff member with a clipboard taking down names, or for podium at the front of the line, and write your name and the number of people in your party. If there’s no line, then simply enter the restaurant and let the staff know how many are in your group. You’ll be shown to your seat, which is usually at a counter with the sushi conveyor belt in front of you, although larger kaiten sushi restaurants may have tables for larger groups alongside the conveyor belt for easy access. 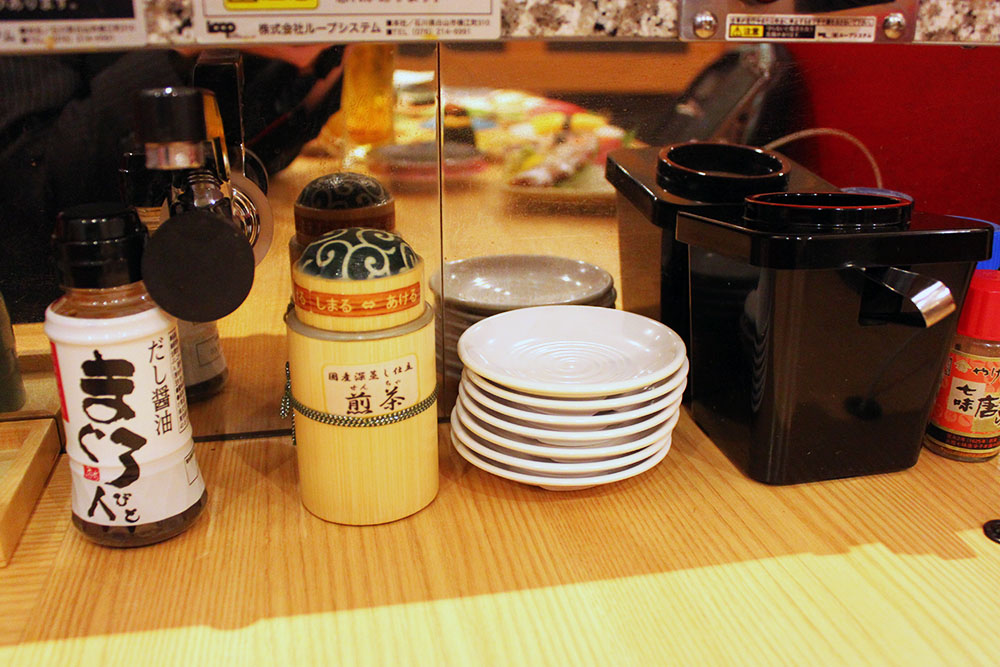 You should find chopsticks, a dish for soy sauce, soy sauce and pickled ginger at your table. Your server will also bring you an oshibori, a moist towelette used in Japan for cleansing your hands before a meal. 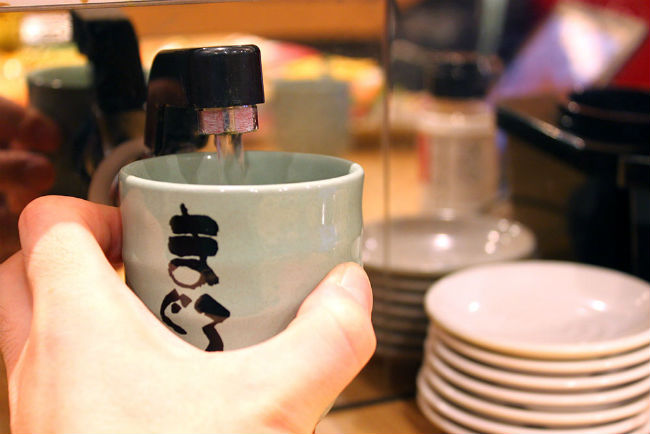 One typical feature of all kaiten sushi restaurants is the unlimited self-serve green tea. At your place setting, you’ll find a container of powdered green tea, as well as a hot water tap. Simply scoop a little bit of green tea powder into your tea cup and add hot water. 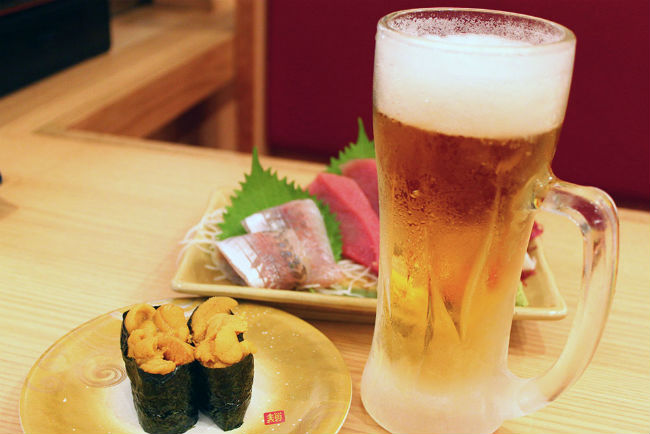 You can also order water or order drinks such as beer, sake, and soft drinks from your server. Nowadays, many kaiten-sushi restaurants are even going high-tech with their ordering systems, offering electronic touch screens for customers to directly choose their food and drinks. 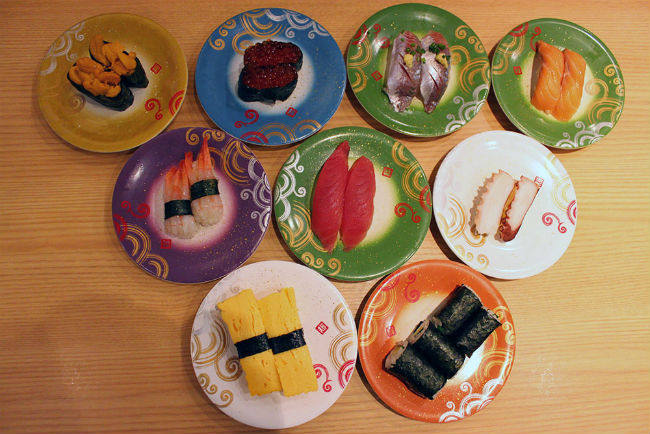 All of the most common kinds of sushi can be found at kaiten-sushi restaurants. This includes nigiri sushi (the typical ball of rice with fish topping), temaki (handroll) sushi, and gunkan-maki or “battleship” sushi—a ball of rice with a strip of nori seaweed wrapped around it, topped with softer toppings such as ikura (salmon caviar) or uni (sea urchin). You’ll also find a wide variety of maki-zushi rolls, such as kappa-maki (cucumber roll), sashimi (raw sliced fish), and inari sushi (sweet pockets of deep-fried tofu stuffed with sushi rice).

Because of the casual atmosphere of kaiten-sushi restaurants, they tend to offer unusual or non-traditional items on their menu that wouldn’t usually be found at more formal sushi restaurants. This includes sushi toppings like roast beef, potato salad, and even miniature hamburger patties. In addition, kaiten-sushi restaurants may offer a variety of side dishes, from more traditional items like miso soup, chawanmushi (savory steamed egg custard), and edamame (salted soy beans), to non-traditional menu items like kara-age (fried chicken), French fries, and even parfaits or pudding for dessert .

Taking Dishes from the Conveyor Belt 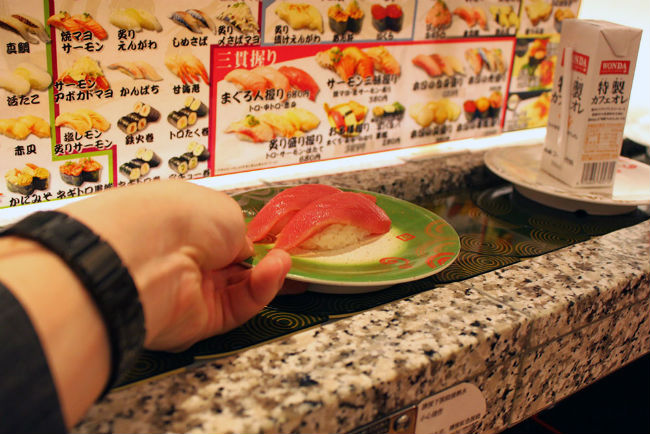 Stack your sushi plates as you eat to make it easier for the server to tally up your total at the end.

Ordering from the Menu 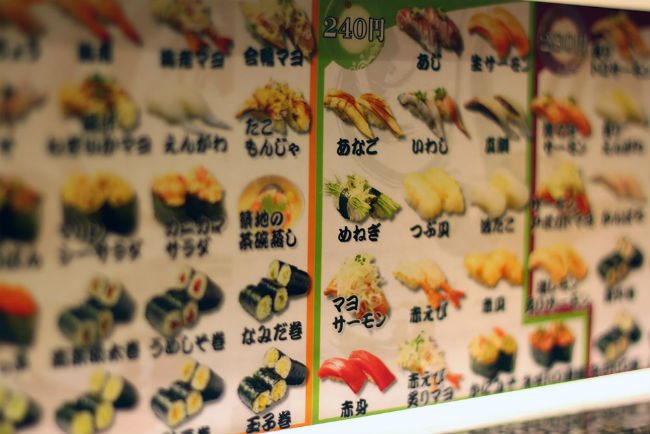 In addition, many people like to order items directly from the chef, who prepares the sushi and places it on the conveyor belt with some sort of marker to indicate that it’s a customer order so that no one else accidentally takes it. If you’re not sitting close to the chef, you can also try flagging down a server to take your order, or use the touch screen menu if the restaurant has an electronic ordering system. 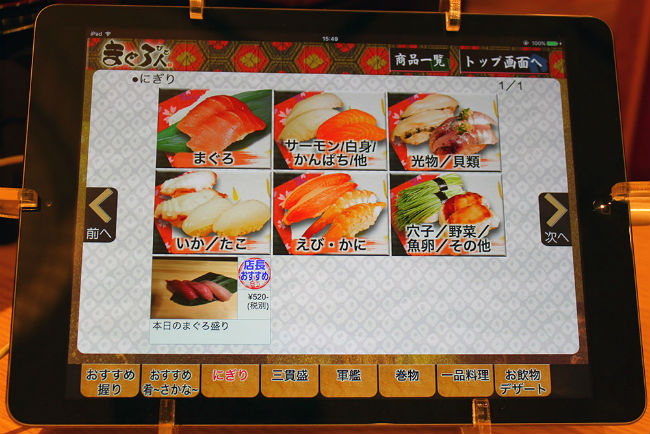 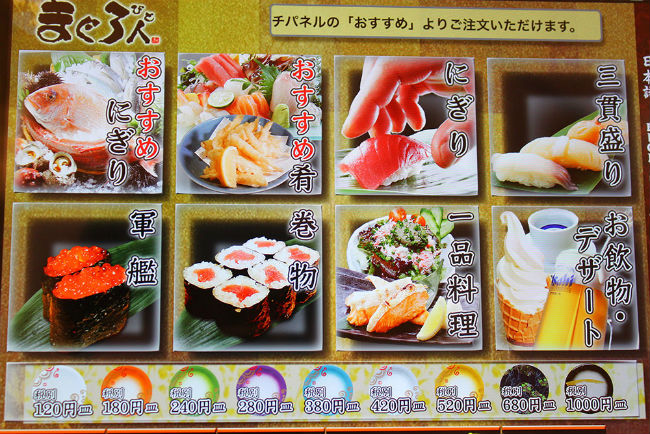 Before you begin eating, it’s a good idea to check the prices of the food. Look for a chart that shows the various ranks of sushi—usually the different prices of sushi are indicated with different colored or patterned plates. 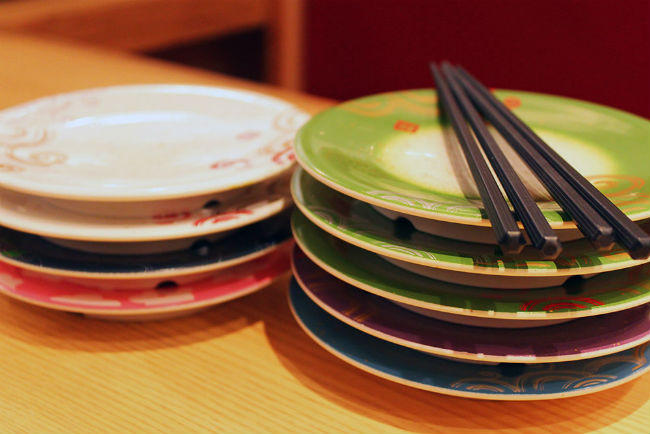 When you’re finished, make sure that all of your sushi plates are stacked together, with your other bowls and soy sauce dish separated to one side. Signal to a server who will come over and count your stacked plates, price everything according to the plate’s pattern, and give you the bill. In Japan, most quick service restaurants including kaiten-zushi require you to pay at the register, so when you’re ready to go, collect your belongings and take your bill over to the front of the restaurant to pay. Tipping is not expected in Japan, so don’t feel obligated to leave a tip when you pay.

For a Fun, Cheap and Tasty Meal, Get Your Sushi Delivered to You on a Conveyor Belt at a Kaiten-Sushi Restaurant

Kaiten-sushi is a great way to enjoy sushi in a quick, affordable, and casual setting. If you’re visiting Japan, then you can’t miss out on this fun and authentic dining experience. For more information on where to enjoy kaiten sushi, be sure to check out the Gurunavi listings for kaiten-sushi restaurants.

All photos were taken at Kodawari Kaitenzushi Magurobito, Gurunavi would like to thank them for their cooperation.