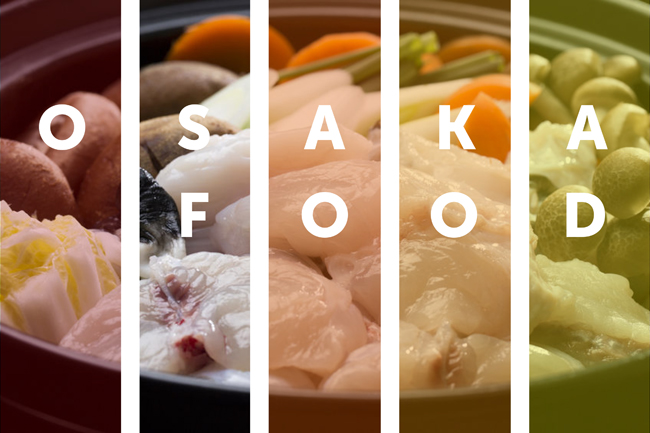 Osaka is the second largest city in Japan and the home of great food, friendly people, and fun nightlife. Located in the western region of Kansai, Osaka has a markedly different culture, personality, and even way of speaking from Japan’s other major city, Tokyo, and the two cities enjoy a friendly rivalry. In particular, Osaka prides itself on being a foodie capital, with a popular saying that Osaka people will spend all of their money in pursuit of good food and drink. The city is home to not only great street food but also traditional dishes.

Best Food in Osaka: Your Guide to What to Eat 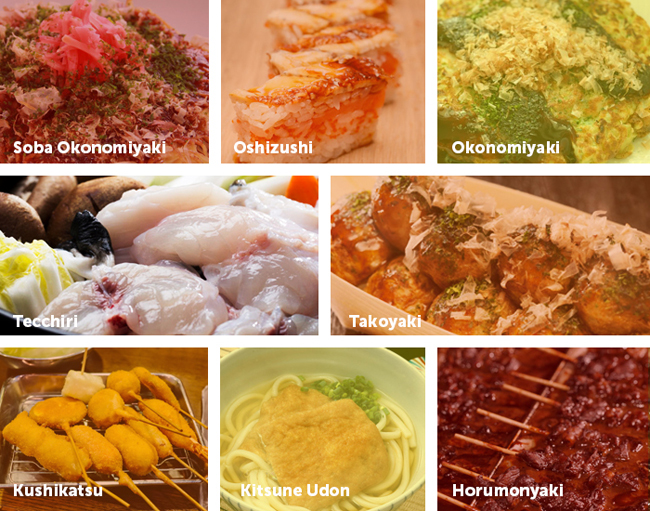 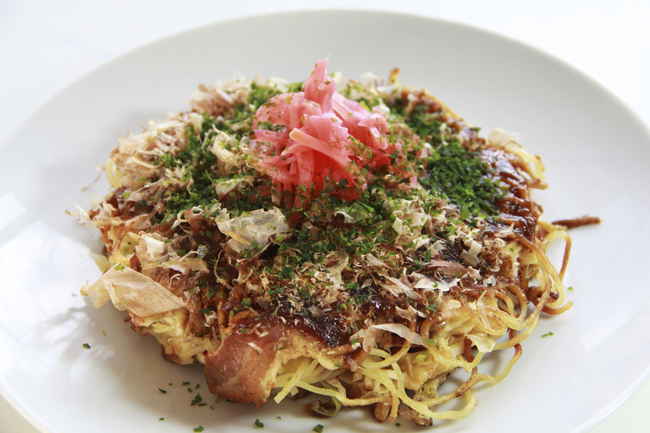 Okonomiyaki, a thick savory pancake of mixed ingredients, literally means “whatever you like, cooked”. It originated in the Kansai region during the post-war era when food was scarce and this simple pancake of batter mixed with whatever ingredients were on hand went a long way. These days, common ingredients for okonomiyaki include thinly sliced pork belly and cabbage cooked in batter, topped with a rich okonomiyaki sauce, Japanese mayonnaise, and dried bonito shavings. However, almost anything can be added to this versatile Osaka food, including dried shrimp, kimchi, cheese, and even chewy mochi. 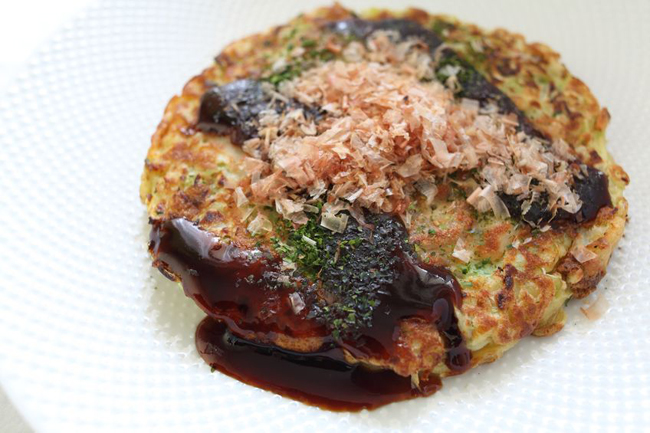 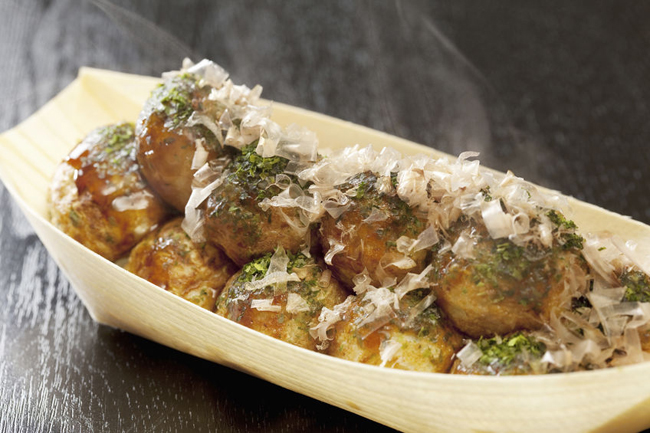 Takoyaki, or “octopus balls”, are a tasty street food is one of the most beloved Osaka foods. Bits of octopus are cooked into balls of fried batter and topped with dark and sweet takoyaki sauce, Japanese mayonnaise, bonito flakes, and pickled ginger. Takoyaki are commonly found at street festivals during the summertime, but are also a popular food to make at home using a special takoyaki grill. These are one of the most classic of all things to eat in Osaka. 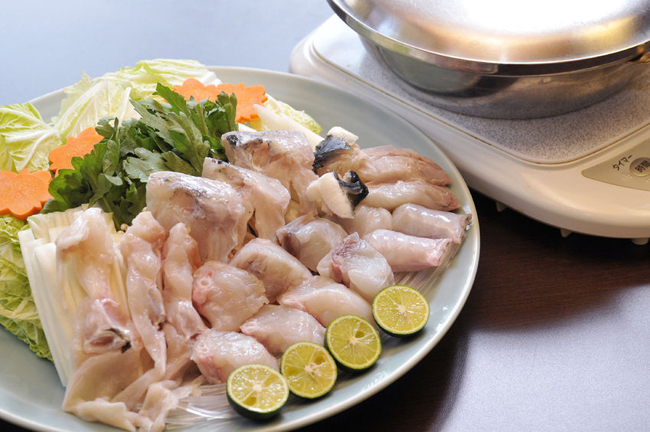 Tecchiri is a hot pot dish of fugu, Japan’s infamous pufferfish which must be prepared by a specially trained chef. Although it’s renowned for its deadly poison, fugu actually has a mild and delicate flavor that goes wonderfully with vegetables simmered in broth. Once everything has been eaten, the remaining broth is mixed with rice and beaten egg for a flavorful porridge. 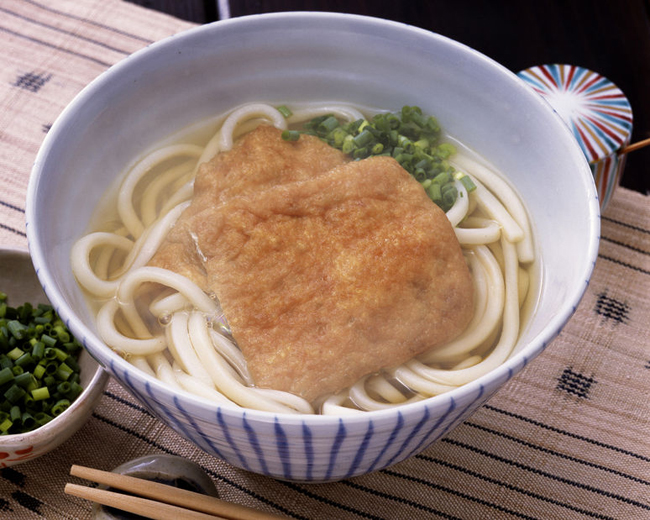 Kitsune udon is a noodle dish that is prepared differently depending on if you're ordering it in Tokyo or Osaka. The Kansai version is renowned as one of the top three types of Osaka food, featuring udon noodles topped with aburaage (fried tofu) that has been simmered in a sweetened soy sauce. The flavorful broth made with usukuchi (light) soy sauce is a hallmark of Kansai-style cuisine. 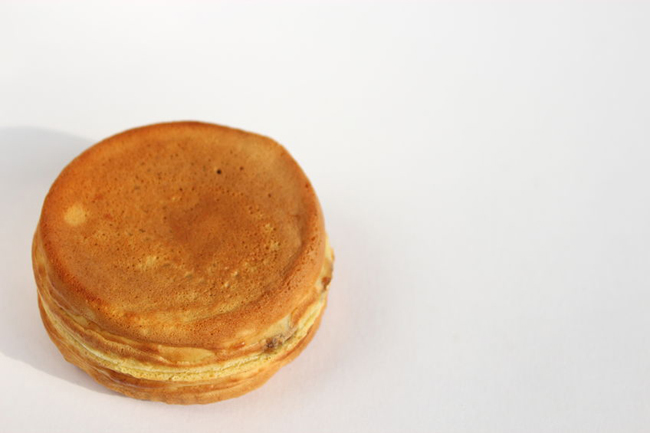 Taiko manju is a sweet specialty found in Osaka, a small fried Japanese cake filled with sweetened red bean paste. The cake batter is cooked in a special mold to get its distinctive shape, which looks similar to a Japanese taiko drum. 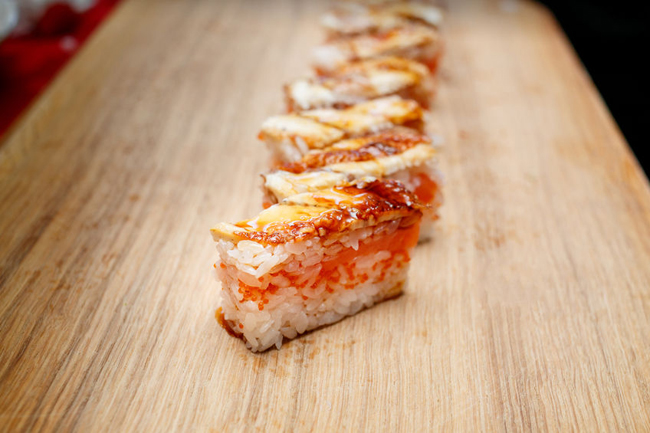 Oshizushi, or “pressed sushi”, is a type of sushi distinct to the Kansai region that’s molded in a box. While Edo-mae sushi from the Kanto region emphasized fresh fish and seafood, before modern refrigeration fresh fish was difficult to come by in the Kansai area, which is located further away from the sea, so oshizushi made with pickled fish became popular. The aromatic wood of the box may also contribute to the flavor of the oshizushi, although these days plastic molds are also common. 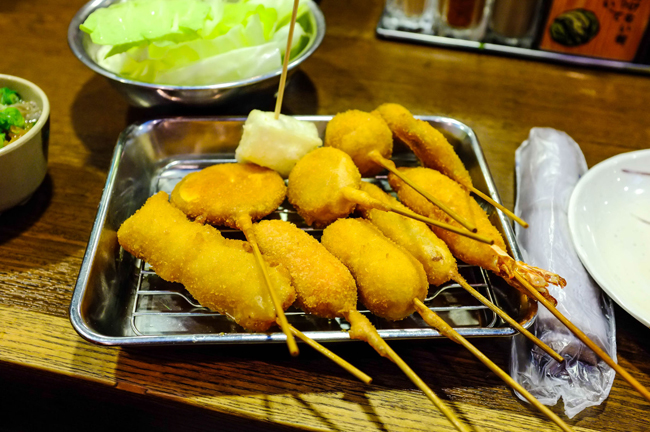 Fried food on sticks is a favorite combination in many places, and Osaka is no exception. The local specialty kushikatsu features various meats and vegetables that are breaded, skewered, and deep fried. They’re eaten hot and fresh out of the fryer in a thick dipping sauce. Just be careful to only dip your skewer in the communal sauce container once! 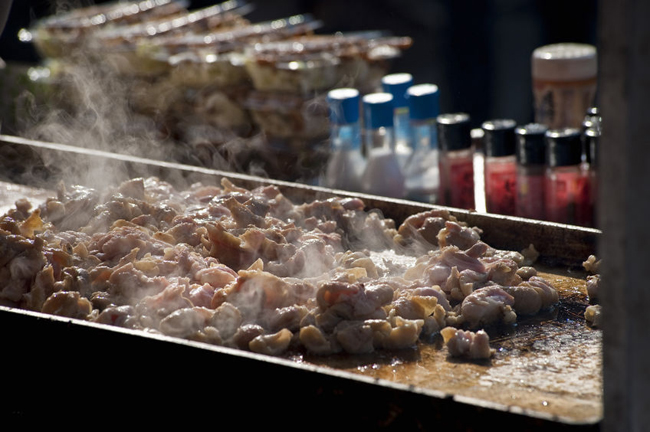 Horumonyaki is a style of Japanese barbecue specializing in beef or pork tripe. Although eating offal is not common in all Western cultures, it’s a popular yakiniku item in Japan due to its distinct texture and bold flavor that stands up well to heavy marinades. What originally started as a cheap and affordable meat option has since become a huge delicacy. Be sure to enjoy horumonyaki with a tall, cold beer, and you’ll soon see why it’s regarded as some of the best food in Osaka. 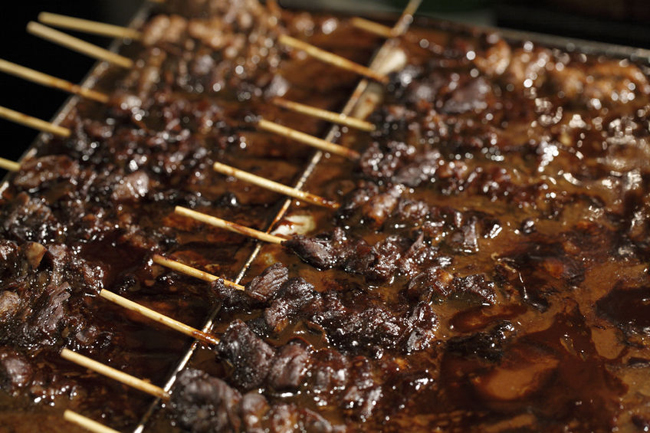 Kansai is historically the “cattle country” of Japan, as evidenced by the number of top beef brands in close proximity, including Kobe beef from Hyogo prefecture, Omi beef from Shiga prefecture, and Matsutaka beef from Mie prefecture in the nearby Chubu region. As a result, beef is an important ingredient in Kansai cuisine and especially in Osaka. One famous beef dish from Osaka is doteyaki, or beef tendon simmered in miso and mirin rice wine. It’s a popular side dish to enjoy in kushikatsu restaurants.

You’ll Never Be Stuck for Things to Eat in Osaka

Osaka is a city of great sights but also of great food. On your next visit to the Kansai region, be sure to check out the wide variety of foods that this gourmet mecca has to offer. Check out the Gurunavi listings for a guide to the best places to enjoy Osaka food.