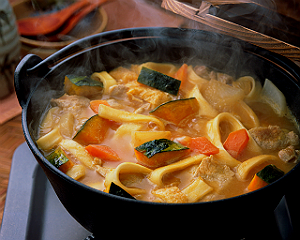 Yamanashi, the birthplace of hoto noodles and hoto nabe (or hot pot), is famous for not being able to grow rice properly. The cold temperatures, mountainous landscapes, and abundance of volcanic debris buried in the soil makes it extremely difficult to grow. Thus, in order to make up for food shortages, the people of Yamanashi started producing flour instead. Noodles, not rice, became the staple food of the Yamanashi region. Along with wheat farming, the popularity of hoto spread into the surrounding prefectures, particularly landlocked Nagano, Shizuoka, Saitama, and Gunma. Visitors to the area will see a lot of soba, udon, vegetable dishes, and of course, the star of this article, hoto. 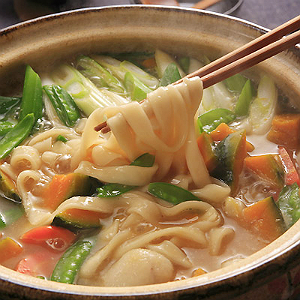 Hoto is a traditional hot pot dish local to Yamanashi prefecture, made with large, thick noodles and lots of vegetables. It is often found around the Lake Kawaguchi and Fuji 5 Lakes region in various hotels and restaurants. The noodles are often compared to udon because of their size, but locals will tell you differently because the way you make them is more similar to how you’d make dumplings.

It is believed that hoto was originally created by the regional warlord Takeda Shingen during the feudal era. He and his samurai would eat this hearty dish before going into battle. Some people believe that he used his own sword to cut the noodles, giving it the name houtou (宝刀）with kanji meaning treasured sword. Others believe it’s just a clever play on words so shops can sell more noodles.

Hoto became a deep-rooted dish in Yamanashi prefecture because popularization of sericulture (raising silkworms for the production of silk). This led to the increase of mulberry fields, so the cultivation of wheat came about as a secondary crop. It is said that hoto became quickly popularized since it is a tasty and economical dish. It can be prepared with a small amount of flour since vegetables and soup are so filling.

How to Make Hoto

Hoto recipes are quite simple, easy to make, and quick. It’s made with kneaded flour, cooked with lots of vegetables and simmered in a miso-based soup. To make the dough for the noodles, add water to the flour, knead it by hand, and stretch it out with a rolling pin. Then, fold the dough over in layers and cut into wide strips with a knife.

Udon is usually salted, set aside to rest, then boiled to wash off the salty taste. As a result the texture is a bit chewy. As hoto noodles are not salted and set aside to harden, like udon noodles, you can add the raw hoto noodles directly to the soup after cutting. This is something that makes hoto noodles unique and time-saving.

To make the broth, add miso to a dashi soup (soup made with small dried sardines) in a medium-sized pot and bring it to a boil and add your favorite seasonal vegetables. Pork or chicken may be used depending on your preference.

After you’ve added all the ingredients, simmer the hoto until the noodles are completely cooked, then cut the heat.

Hoto is a very starchy dish because of the noodles and potatoes, but also packed full of vitamins as well as fiber from the soup and vegetables. It’s customary to use seasonal vegetables as the main ingredients. In summer, people like to add stamina vegetables such as onions, green onions (scallions), and potatoes.

In winter, it’s popular to add vegetables with lots of vitamins, that will keep you full and warm you up during the cold months. These ingredients are kabocha (Japanese pumpkin or squash), taro, carrots, Chinese cabbage, shiitake and shimeji mushrooms.

Kabocha, or Japanese pumpkin (a kind of squash) in particular, is a very popular ingredient. It becomes very soft and tender in the soup while it’s boiling and often breaks down into the broth. This saturates the flavor of the soup, making it sweet, nutty and delicious. Many times people get excited if they find a whole piece of kabocha in their soup!

How to Eat Hoto

When made at home, hoto is usually cooked in a big pot, with the leftover portion served the next day. Since leftover hoto soup becomes starchier with a stronger taste, many people favor this "twice cooked" leftover hoto over a freshly prepared one.

At regular households in Yamanashi, hoto is always cooked in a big pot and served in donburi (or miso soup bowl) as a main staple. It can also be enjoyed with a side of rice, in place of miso soup. Due to penetration of flour eating culture in Yamanashi prefecture, hoto goes by other names, such as the name "ozara" given to cold "hiyamugi" noodles, which are eaten in summer, and "yumori" for hot udon noodles in winter. Each household has its own unique ways of preparing the noodles and combination of ingredients to create noodles “just like Mom used to make.”

Where to Eat Hoto

Although hoto is still recognized as a daily household food in Yamanashi prefecture, the custom of eating it at home is becoming less and less popular since the modernization of Japan. Nowadays, since pre-packaged hoto noodles are sold with little packages of miso at supermarkets and other retail shops, not many people make it at home. Hoto nabe is also commonly found at specialized restaurants, ryokan, and local eateries. At restaurants, hoto is often served in an individual-sized iron pot similar to "Nabeyaki-udon” (pot grilled noodles) and therefore, people from outside of Yamanashi tend to think that hoto is "a kind of udon noodle" or "hot pot dish."

Hoto Noodles are the Perfect Food for Any Season

Does all this talk about food make you hungry? Do you have a craving for hoto right now? There are an abundance of places to eat it in and around the Tokyo area. Click on the link below to check out Gurunavi’s list of restaurants that serve hoto and try this amazing hearty Yamanashi noodle dish for yourself!