Get a Grip on How to Use Chopsticks in Japan

Get a Grip on How to Use Chopsticks in Japan 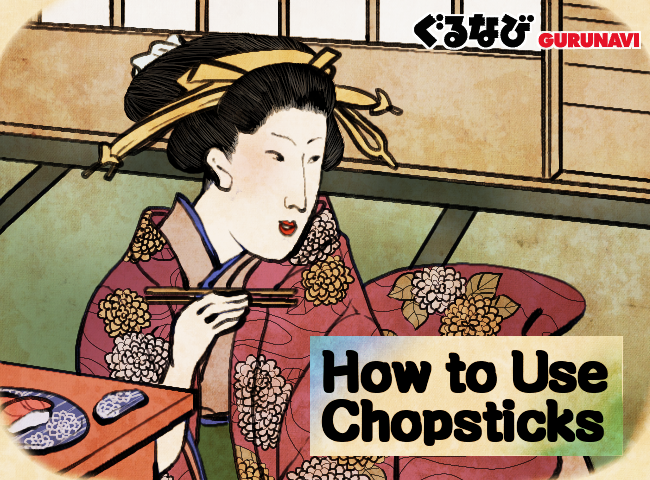 Chopsticks. Whether you use them like a pro or are filled with the fear every time you’re faced with using them, you’re bound to encounter them on your trip to Japan. While some restaurants may offer a fork or spoon alternative, it’s best to be prepared, as chopsticks in Japan are used to eat everything from traditional dishes like rice and noodles to non-traditional ones like pizza and pasta. Even once you know how to hold and eat with chopsticks, there are certain manners that dictate how they should and shouldn’t be used.

Here’s a guide with some simple steps on how to use chopsticks, things to avoid, insight into the history of chopsticks in Japan, and differences between Japanese chopsticks and those of neighboring Korea and China.

How to Use Chopsticks

The standard method for holding and using chopsticks is to cradle the bottom one between your thumb and index finger, and move the top chopstick up and down like a lever. This levering action helps you to grab, grip and ultimately transport food into your waiting mouth. When you first hold chopsticks, you may need to adjust them a little to feel comfortable. And remember that practice makes perfect, so try picking up small items like nuts or beans at home. 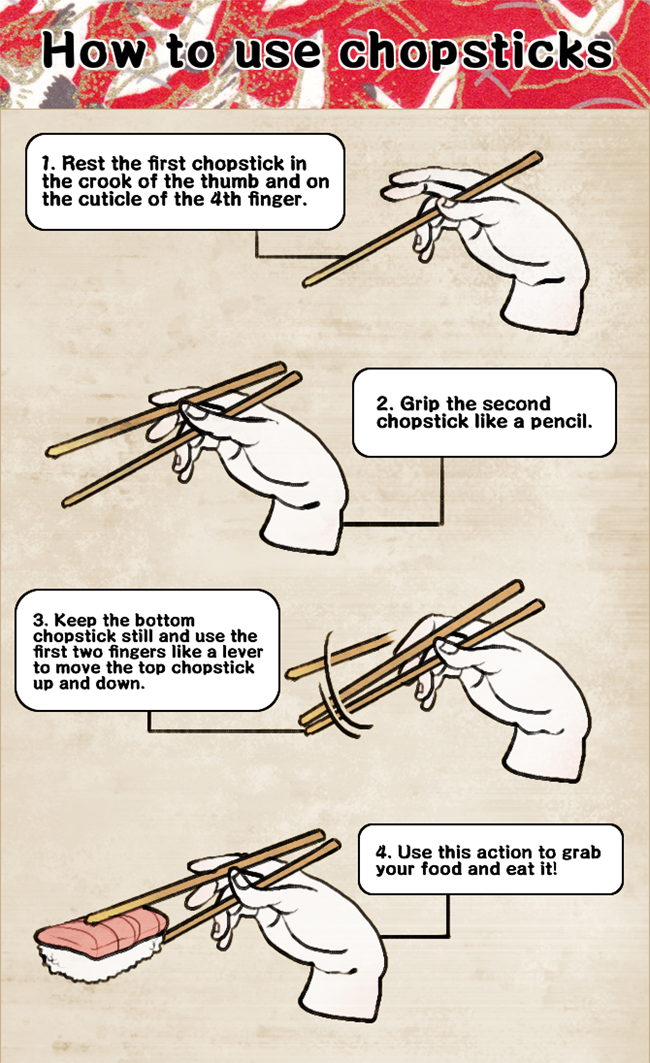 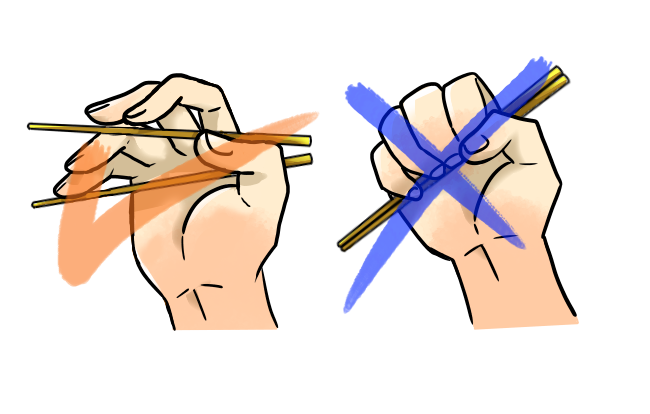 Although chopstick etiquette is not as formal as it once was in Japan, there are still certain manners that are best to follow. Poor dining etiquette can make you and the people around you feel uncomfortable, so it’s best to brush up your chopstick skills and be ready to dine in all situations from casual to formal. Learning basics such as holding chopsticks is the easy part, but learning what you shouldn’t do is hard! Once you do know the rules, though, you’ll definitely be complimented by Japanese friends and onlookers!

History of Chopsticks in Japan 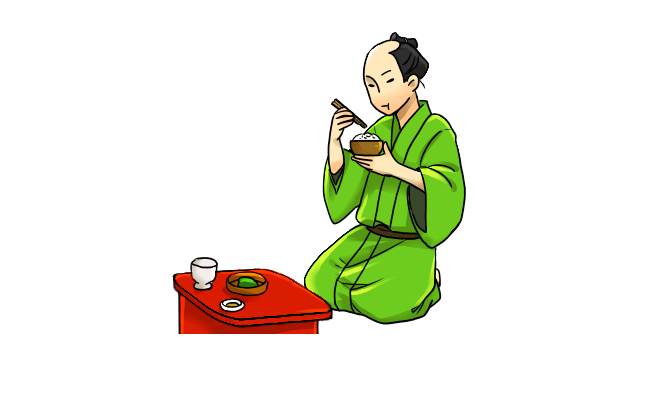 Chopsticks originated in China around 5000 years ago and may have developed from the practice of using sticks and twigs to take food from hot cooking pots. During 500 AD, the custom spread throughout Asia and Southeast Asia, including Japan.

The oldest recording of the use of ohashi or otemoto (chopsticks) in Japan is in 712 AD, but it’s likely they actually arrived earlier. At first, chopsticks were used for ceremonial purposes like offering sacred things to shrine gods or deities, but they eventually found their way into homes. 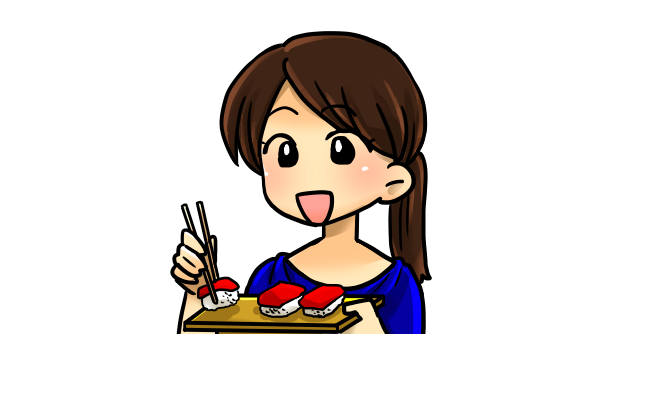 These days, chopsticks are ubiquitous in Japan. From premium-quality chopsticks handcrafted by Japanese artisans from precious wood such as ebony and snakewood, or embellished with gold leaf and decorative motifs, to the disposable ones given out at convenience stores and cheaper restaurants, chopsticks come in many forms.

A key feature of chopstick culture in Japan is the hashioki, which are small, decorative chopstick rests that preserve the cleanliness of the chopsticks by resting them on them between mouthfuls. These may be made from porcelain, wood, plastic, metal, glass, or precious stones, in a variety of shapes. 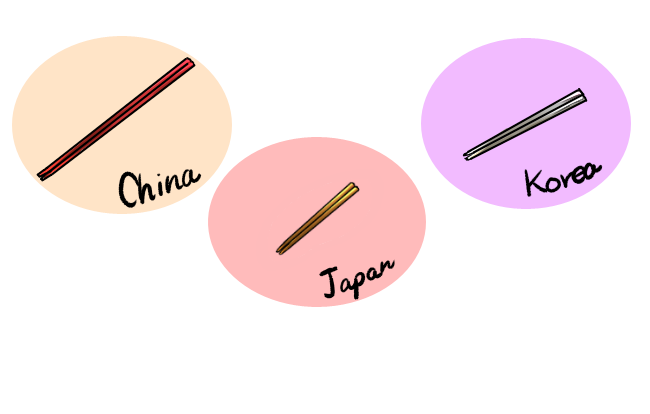 For what seem like fairly straightforward implements, the appearance, material and usage practices actually varies quite a bit between countries. This can be seen in a comparison between Japanese, Chinese and Korean chopsticks.

Japanese chopsticks are most commonly made of wood, are rounded in shape, and of the three countries, they have the finest, most tapered end. In terms of length, they are shorter than both Chinese and Korean chopsticks.

Chinese chopsticks are the longest of the three; this comes from the Chinese practice of serving food at the center of a table on a lazy susan, where longer chopsticks give greater reach for taking food. Chinese chopsticks are commonly made from bamboo, plastic and porcelain, and may be decorated with motifs or Chinese characters. They are characteristically more squared in shape, only slightly tapered and rounded at the end.

In terms of length, Korean chopsticks typically fall between Chinese and Japanese ones. They are made from stainless steel, with a textured end to enable ease of picking up and holding food. Rumor has it that traditionally, the Korean royal family’s chopsticks were once made of silver, which would become discolored should they come in contact with poisoned food.

Now That You’re across How to Eat with Chopsticks, It’s Time to Get Practicing!

Whether you’re in Japan or another chopstick-using country or not, there’s plenty of opportunities to use chopsticks these days. By mastering a few tips on how to hold and use chopsticks, you’ll find they can be fun and novel to use, and make for a more authentic dining experience. Browse Gurunavi’s list of restaurants in Japan, so you can put your skills to the test!