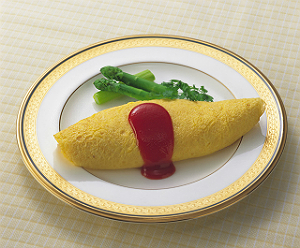 In Western countries, people think omelette and think of a simple whisked and fried egg stuffed with cheese, meat, and/or veggies, and that’s about as difficult as it gets. Omelettes are delicious, easy to make, and an all-around winning breakfast food. Japan, however, saw this amazing dish and decided to make it even better, by adding fried rice, and say, “You only eat eggs at breakfast? Pff...we can eat them all day long.” And so the omurice saga, the story about the Japanese omelette, began.

The Dispute of How the Japanese Came to Eat Omurice 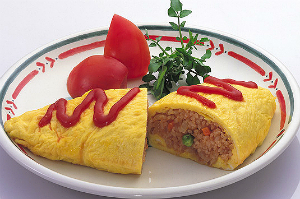 Though omurice is generally considered a Western dish by Japanese people because of its use of eggs, it’s actually a very Japanese creation. The true origins of omurice are unclear, but it allegedly made its debut in the year 1900 (the 33rd year of the Meiji Era) at a famous Western-style restaurant in Ginza, Tokyo, called Renga-tei. The idea was to make a dish that could be easily eaten with one hand while working in a busy kitchen. Since the dish became so popular, however, countless restaurants have claimed omurice and their own thought child, including the famous Osakan restaurant, Hokkyokusei (North Star). The answer as to who the true omurice pioneers are, remains a mystery.

The word, “omurice” is a kind of gairaigo (a word in Japanese borrowed from a different language), literally “omelette rice.” “Omelette” comes from French and “rice,” of course, comes from English. Eating eggs didn’t really become acceptable by strict Buddhist standards until the Edo Period, and then when Japan opened its borders and ports. Westerners with their “new” style of cooking started to influence Japanese tastes, and that’s when they started to get creative. Today, omurice is seen on practically any Western-style family restaurant menu, and is a particularly popular item on kids menus. There are so many variations of this dish, some restaurants even specialize in it, boasting over 30 different assortments. 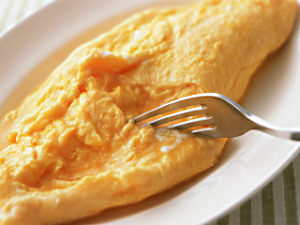 The Classic Omurice
Nothing can beat the original. The classic omurice is made with chicken rice and cut up veggies all stir fried to perfection with ketchup as the main event. After the omelette has been laid over the rice, it’s topped off with a dash of more ketchup. Many people like to get artistic and draw pictures or write little messages with the ketchup. What would you write?

Omusoba
If there’s any other “fast” food the Japanese love as much as the original omurice, it’s yakisoba (a snack dish made of stir-fried noodles with veggies and pork). Why not mix the two together? Omusoba is a dish that uses yakisoba instead of rice, and the result is divine.

Omutako
In Okinawa, there’s a popular dish called Taco Rice, which is basically all the stuffings of a Mexican style taco (lettuce, diced tomato, salsa, ground meat and cheese) laid over rice instead of a taco shell or tortilla. How else can you make it better than by covering it in a soft fluffy egg blanket? These two dishes got married and had a baby called omutako... and it’s delicious.

While not all varieties have special names like the three above, there are countless ways to change up the flavor. For meat you can use anything from beef, pork, spam or fried hot dogs. Instead of ketchup, the rice can be flavored with either demi-glace, salt and pepper, beef stock or a white cream sauce, and then more of that same flavoring can be used as a topping. There’s sure to be a variation for even the pickiest of egg-eaters. Bon appetit!

Making a Masterpiece in Your OWN Kitchen

The first step to making a proper omurice is making the fried rice. Cut up some chicken (or your favorite ground meat, or no meat) and your favorite veggies, typically mushrooms and green peppers, into small pieces. Sautee them together in a well-oiled pan until soft, add some cooked rice, and mix. The final step is adding the ketchup - lots of it - and stirring well. Now it’s time to make the ‘omu’ part of the omurice.

Pretend you’re making a regular omelette, pouring whisked eggs into an oiled-up frying pan and simmering on low heat. Tilt the pan around to spread the egg out thinly so that it covers the entire bottom surface. Usually, two to three eggs are used per serving, seasoned with salt and pepper then stirred. Getting that fluffy egg texture may take a little practice, though, as well as learning how to control the amount of oil and heat.

Pack the chicken rice you made beforehand into a round diamond-shaped mold for shape, and place the rice quickly but carefully onto the egg in the pan. Use chopsticks to carefully wrap the egg around the rice, flip it in the pan, and then serve it on a plate. Some people prefer to place the rice and shape it on the plate first, then lay the omelette over it like a blanket. Whatever’s easiest, right? Also, since it covers all the basic food groups, protein and vegetables, and starch, you can eat it as your main dish. If you’re still hungry, you can always make more!

Make Omurice One of Your Top Dishes to Try in Japan

Not only does Japan’s “omelette rice” have a very interesting debut story, it’s delicious, quick and there are countless mouth-watering ways to eat it. Be sure to try several varieties of omurice during your trip to Japan and find your favorite type! Follow this link to Gurunavi’s restaurant page to find some great restaurants that serve omurice.