Chuka: A Unique and Delicious Kind of Chinese Food in Japan

What’s the Difference Between Chinese Food and Chuka? 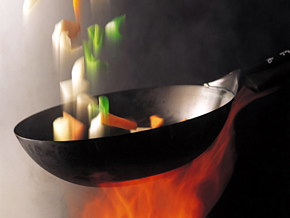 Chinese cuisine is considered one of the three most well-known styles of cooking in the world. Chinese food is so popular that it can be eaten anywhere around the globe. While the term “Chinese food” is used to refer to any and all food from China, there are some very distinct regional styles, such as Cantonese, Mandarin, Szechuan, and Shanghai cuisines.

Japanese restaurants have then taken aspects of these regional styles and changed the seasonings and ingredients to match Japanese tastes. To differentiate between true Chinese food and the Japanese version, this style of cooking was given a new name: "Chuka."

A Brief History of Chinese Food and the Birth of Chuka

China itself has a long history, and China's style of cooking has developed along with it. Both contemporary Chinese and Chuka foods incorporate foreign ingredients and flavors, featuring an interesting mix of regional styles. Here is a list of the different styles and why they’re special.

Cantonese cuisine is eaten in the southern region of Guangdong. This is the style we most often think about when we hear the word “Chinese food,” and is the style most often eaten in other countries. Beijing cuisine, from the area of Beijing of course, evolved from the imperial cooking methods in northern China. It uses lots of meat and wheat flour. Szechuan cuisine, eaten in the Sichuan Province, is characterized by its bold flavors and spiciness. Seafood and rice dishes are common in the port areas of Shanghai, birthplace of Shanghai cuisine.

Japanese-Chinese fusion dishes, while based on authentic Chinese cuisine, were created by Japanese chefs for the Japanese palate, and is labeled separately. The recipes are neither purely Japanese nor purely Chinese, but rather a delicious and unique blend of both.

Where to Eat Chinese Food and Chuka in Japan

Cantonese cuisine is eaten in the southern province of Guangdong. Most Chinese food eaten outside of China is based on Cantonese cuisine. Lots of seafood is used, and Cantonese dishes are not as heavily seasoned as those from other regions. Notable dishes from Guangdong are:

Yamu cha (yum cha) is a style of eating where one eats dim sum while drinking tea. Dim sum are small portions of food or desserts served on small plates. The following are some typical dim sum dishes.

Happosai: This dish is made from vegetables and pork (or chicken) stir-fried in a thickened sauce.

Fukahire soup: Fukahire are dried shark fins, which are extremely expensive and part of a highly controversial industry because of the cruel way in which the sharks are fished. The fins are eaten as a soup with a slightly gelatinous consistency.

Chinjongyu is a dish made from steamed whitefish with green onions and Shaoxing rice wine.

Beijing cuisine comes from the imperial cuisine that developed in northern China. Much of the food requires lots of preparation because the presentation is very important. This style often uses more expensive ingredients like meat and wheat flour, as seen with the dished below.

Pekin dakku (Peking duck): This is an entire duck that is carefully cooked until the skin is crispy, then wrapped in a thin pancake made of green onions and cucumber. It’s cooked with sauteed ground meat and miso paste, then eaten.

Baozu (baozi): These are steamed buns filled with seasoned meat and vegetables, wrapped in a light and fluffy flour dough.

Gyoza (Chinese dumplings) are boiled dumplings filled with seasoned meat and vegetables and wrapped in a thin flour dough skin.

Szechuan cuisine is eaten in the vicinity of the Sichuan Province. In keeping with the hot and humid climate of the region, Szechuan cuisine often features chili peppers and other spicy ingredients. Here are five examples of popular Szechuan dishes.

Ebi no chili sauce: is shrimp, stir-fried in a spicy, tomato-based sauce.

Chin-jao rosu: This is a thin-sliced beef and pepper stir-fry.

Hoikoro: This is stir-fried pork with cabbage, peppers, and other vegetables.

This is a cuisine that often features seafood and rice because the Shanghai region is surrounded by water. Shanghai cuisine is often made with black vinegar to give it a noticeable sweetness. Below are some examples of Chinese cuisine from the Shanghai region.

Shoronpo: This is a dish made of meat and vegetables mixed with congealed soup, wrapped in flour dough and steamed. As the shoronpo heats up, the soup melts so that when the skin is broken, the juicy meat and hot soup pour out. The best way to eat them is with ginger and soy sauce or black rice vinegar sprinkled on top.

Shanghai-gani (Chinese mitten crabs): Shanghai-gani are a rare delicacy that can only be eaten in autumn, especially the female crab roe. They are eaten steamed and flavored with black rice vinegar.

Niku-dango no amazu-ankake is comprised of ground meat shaped into balls and covered in a thick, sweet-and-sour sauce.

As mentioned before, Chuka is based on Chinese food, but developed separately in Japan, with a distinctly Japanese flair. The ingredients and preparation methods have then changed considerably since it was first introduced, and seasonings have been altered to better fit Japanese tastes, like miso ramen. The only thing purely Chinese is the noodles--everything else, including the soup, is very Japanese. Chinese restaurants in Europe and America are also variations on Cantonese cuisine, catering to the tastes of the people in the area, but Japanese Chuka is closest to actual Chinese cuisine. It features little aspects all the major regions of China and is definitely worth trying.

Banbanji: This is a Szechuan-based dish made of finely shredded boiled chicken with cucumbers and kikurage mushrooms, covered with sesame sauce.

Yaki-gyoza (pot stickers): Ground meat is mixed with green onions and ginger, surrounded by a wrapper of flattened dough made from flour and water. In China these gyoza are usually steamed or boiled, but are usually served fried (the "yaki" in "yaki-gyoza") in Japan.

Hiyashi Chuka: Toppings such as ham, cucumber, and strips of scrambled egg are served on top of cold egg noodles in a vinegar-based soup. Hiyashi chuka is a refreshing dish popular in the summer in Japan.

Tenshinhan is a simple dish of scrambled eggs served over rice.

Chuka-don: This is a dish made of happosai (Vegetables and pork/chicken stir fried in a thickened sauce) nestled on a bed of rice.

Kani-tama: Crab meat is stir-fried with eggs and covered in a thickened sauce. It’s based on a Cantonese dish called egg foo young.

Ja-ja men is a Beijing-style noodle dish topped with a menagerie of ingredients such as stir-fried ground meat and bamboo shoots, then seasoned with a spicy miso sauce. It sometimes comes with cucumber and bean sprouts.

Chinese Food in Japan is Unique and Flavorful

There are so many different dishes and flavors to explore with Chuka food in Japan. If you have a craving for delicious Chinese food and are anywhere in Japan, be sure to check out Gurunavi’s restaurant page for information on where you can get the best Chinese food, or Chuka, in your part of Japan.