Japanese All-You-Can-Eat: 9 Cuisines to Try While in Japan

Japanese All-You-Can-Eat: 9 Cuisines to Try While in Japan 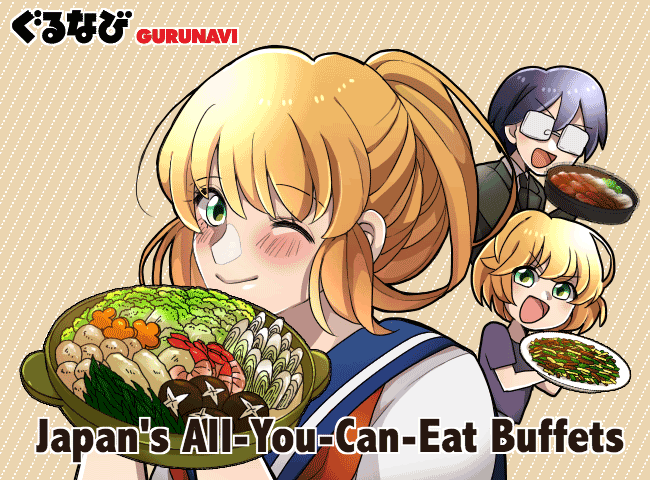 In Japan, the concept of “all you can eat” may be different from what you find in your home country. While the traditional European-style smorgasbord is a popular choice for dining in Western countries, there is another option that is even more popular in Japan. Keep reading to find out what to expect when visiting an all-you-can-eat restaurant in Japan as well as some popular cuisine options to try.

The Basics of All-You-Can-Eat & Drink in Japan 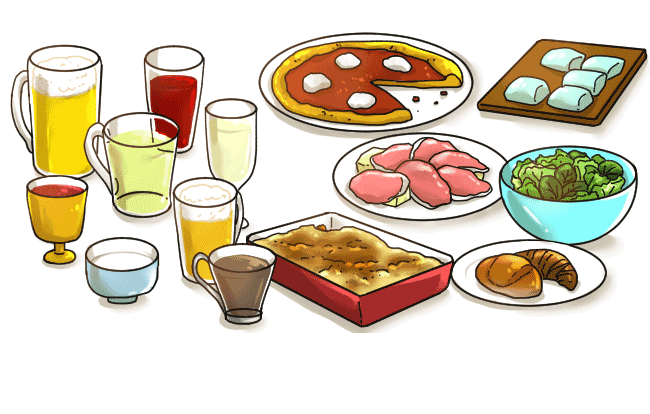 Across Japan, restaurants can be found offering a wide range of all-you-can-eat plans (known as “tabehodai”) and all-you-can-drink plans (known as “nomihodai”) that give patrons the opportunity to gorge themselves on both Japanese and international cuisine and libations at a relatively low price. What makes these options different from a traditional buffet is that with tabehodai and nomihodai, you always order off the menu, while with a buffet, you get the food yourself.

Restaurants offering “all-you-can” options are a safe choice for the ever-popular nomikai, or Japanese drinking party, as everyone can simply order off the predetermined menu. Japanese restaurants usually limit the variety of dishes you can order with an all-you-can-eat plan (there is usually a separate menu for that), and categorize the all-you-can-drink options into a small selection of alcoholic and non-alcoholic drinks.

Also, it’s important to know that with most all-you-can-eat restaurants in Japan there is a time limit—usually two or three hours from sitting down to leaving. And while the time limit may seem ample, a “last order” for food or drinks is usually imposed 30 minutes before your time limit is up. 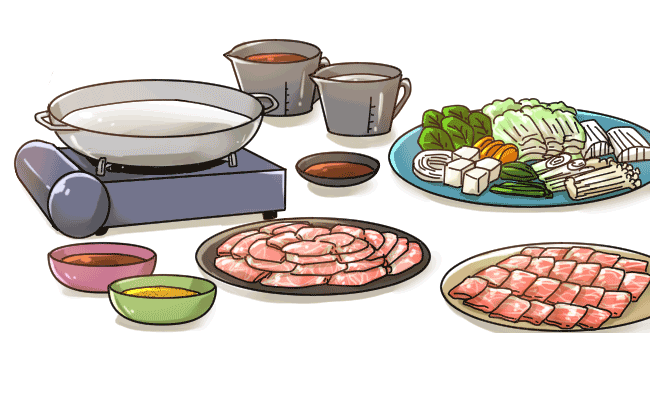 The name comes from the sound of swishing the meat and vegetables in a savory broth, which is the basic method of enjoying shabu-shabu. Since Japanese restaurants tend to not serve raw meat buffet-style, you first order the meat from the table and then go get the vegetables yourself (often napa cabbage, carrots, seasonal greens, onions, and mushrooms). Depending on the restaurant, different broth options are available, and two types of dipping sauces are generally offered—ponzu (a light, tangy sauce with a touch of citrus) and gomadare (a thick sauce made of sesame seeds). Raw eggs are sometimes offered for those who enjoy a sukiyaki-style meal. 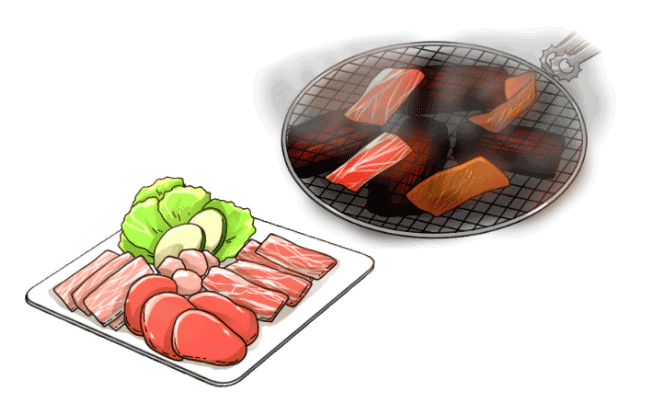 While shabu-shabu is considered the “healthier” option of the two, yakiniku, or Korean-style barbecue, is great for when you want to try different cuts of Japanese beef. Some restaurants extol the quality of their meat, specializing in regional cattle breeds, while others tout the variety of cuts available on the menu. Horumon, or offal meat, is a must-try at every yakiniku place. You can dip your meat in either salt or tare (sauce), a choice which can cause a lively debate at the table when eating among Japanese friends. 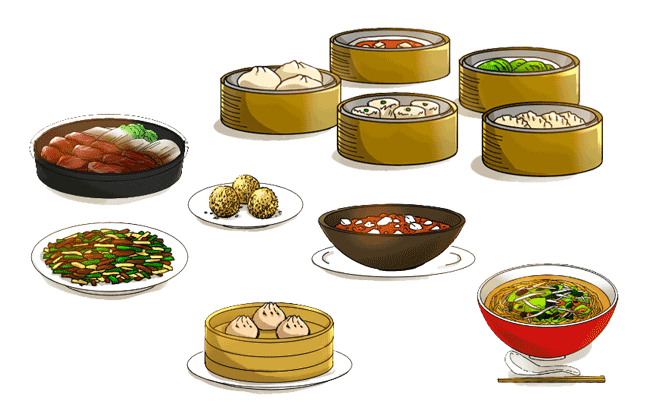 When it comes to the many iterations of Chinatown found across the globe, Yokohama’s is considered by many to be the most inviting for tourists—a recognition that is deeply reflected in their dim sum buffets. From chicken feet to soup dumplings, all-you-can-eat restaurants that offer dim sum often specialize solely in this traditional Chinese cuisine, with steaming bamboo trays piled high with goodies. However, in Japan, a Chinese buffet is an entirely different matter. Chinese buffet restaurants tend to serve cuisine like noodles and stir-fry banquet-style, and often include a nomihodai menu of beer and the other typical alcoholic drinks as part of the set price. 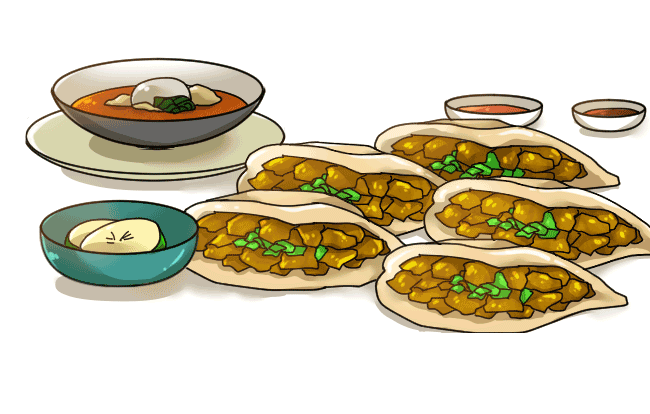 Ask natives of Japan what their image of Mexican food is and their first answer will most likely be tacos—or more specifically, taco rice, which is actually an Okinawan dish. With all-you-can-eat Mexican restaurants, you will find something similar to a regular salad bar with the addition of taco meat, tortillas, and essential condiments like sour cream. Japanese rice is also available in these restaurants, so be sure to try a taco rice bowl during your visit! 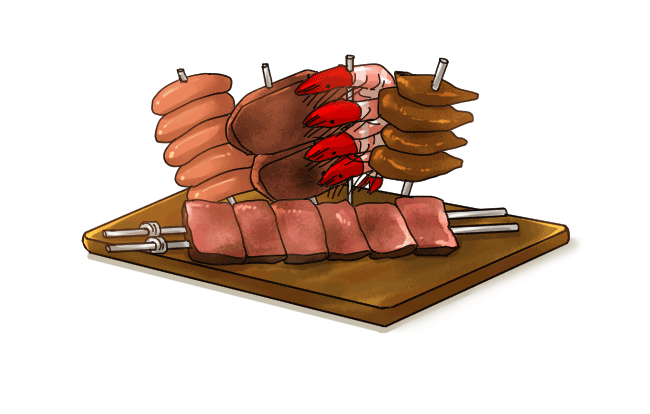 With the large amount of Brazilian immigrants in Japan, it goes without saying that Brazilian food—particularly Brazilian barbecued meats—is quite popular. Unlike yakiniku where you sear the meat yourself, Brazilian barbecue is generally served already cooked; and perhaps the biggest difference of all: they serve grilled pineapple! Salad bars are also often provided buffet-style to lessen the guilt of eating vast amounts of delicious meat. 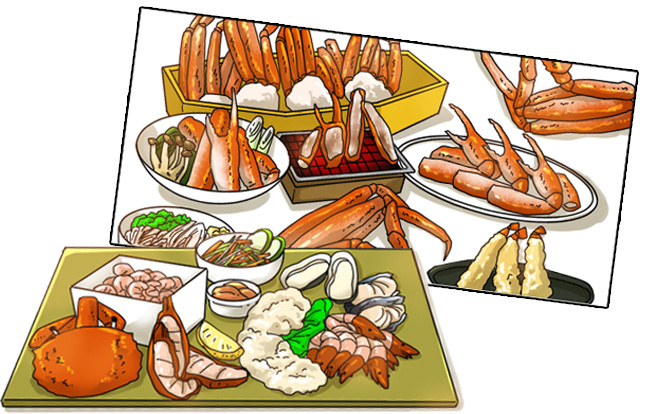 In general, seafood buffets in Japan serve a typical array of local saltwater delicacies either boiled or steamed, while higher-end buffets serve a larger variety of the fisherman’s daily catch. One of the most popular reasons to frequent an all-you-can-eat seafood restaurant in Japan is for the crab. The most common types of crab are kegani (hairy crab, and indeed it is), taraba kani (king crab), and zuwai kani (snow crab, which is said to have the sweetest meat). A big hint: look at what other patrons are getting. Chances are that the more popular an item, the fresher it is. 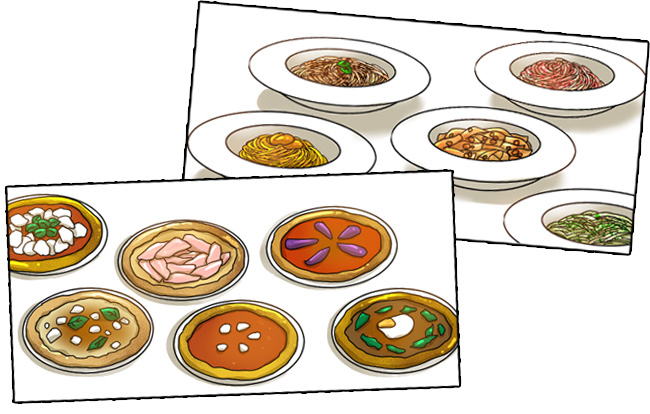 Carbs + carbs = one happy belly! At a Japanese pizza and pasta buffet, you’re likely to come across standard Western fare like pepperoni pizza and spaghetti carbonara sitting side by side with more “adventurous” flavors like squid ink pizza and spicy cod roe pasta. Other staples of this type of buffet are traditional Japanese curry and rice as well as a non-alcoholic drink bar. 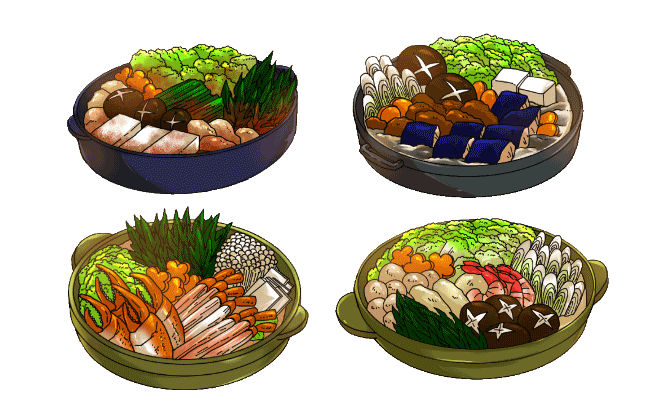 Ah, nabe. The quintessential winter food of Japan. Also called hot pot, the main difference between nabe and shabu-shabu is that with shabu-shabu, the ingredients are cooked in the broth one at a time, while with nabe, everything is simmered at once. Ingredients are generally similar between shabu-shabu and nabe. Nabe also offers a greater variety of broths, ranging from soy milk with ginger, to wild flavors like cheese and kimchi. At the end of your nabe meal, make sure to get every last bit of goodness from the bottom of the pot with shime, which comes in the form of either rice or noodles to sop up the wonderful broth that’s left behind. 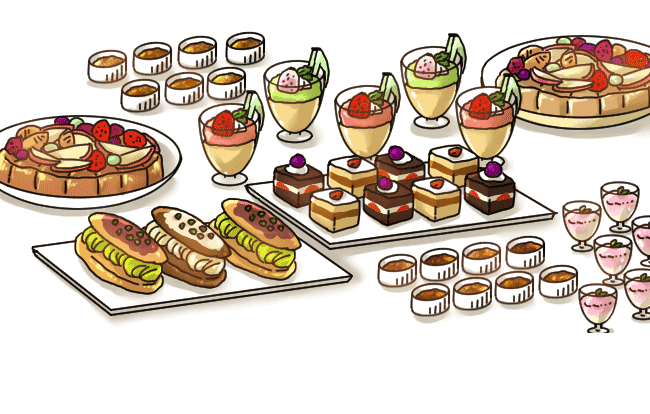 Got a sweet tooth that can’t be satisfied? You can try to eat your weight in desserts at one of Japan’s many dessert buffets. These shops usually specialize in sweets, though savory sides are often available (more to fill you up than to cleanse your palate). But why bother with pasta and curry when you can stuff yourself with an endless variety of cakes, cookies, ice cream, and puddings?

Many of the buffet, tabehodai, and nomihodai options available let you to try a variety of traditional Japanese cuisine and Western imports without the guilt of spending a lot of money. And in Japan, your options are endless; so be sure to check out Gurunavi’s all-you-can-eat restaurant listings to see just how much Japan has to offer.