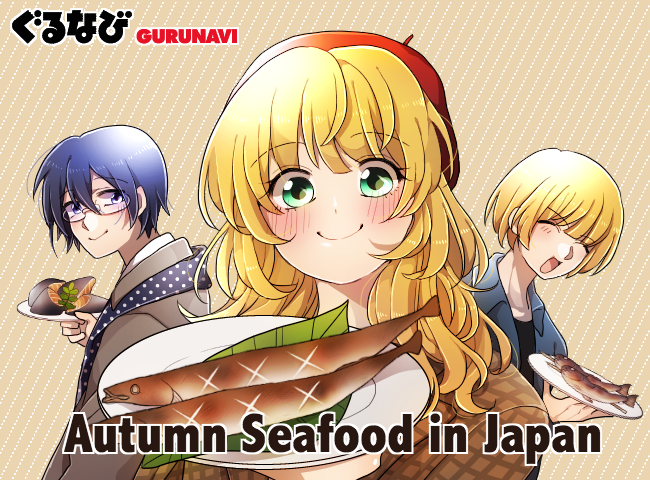 The cool change in September in Japan brings with it not just a change of the color of the leaves of the Japanese gingko and maple trees, but also in the seafood that appears on menus and in homes across Japan. Autumn in Japan is thought of as “the season of hearty appetites” “shokuyoku no aki”, with all the tasty Japanese autumn food that becomes available encouraging people to eat up and take on the extra nutrients for winter. But it’s not just us stockpiling for winter the cooler waters encourage fish and shellfish to fatten up, making them particularly delicious.

Here’s a selection of some of the Japanese seafood that comes into its prime in autumn, and is therefore known as “aki no mekaku,” the taste of autumn. 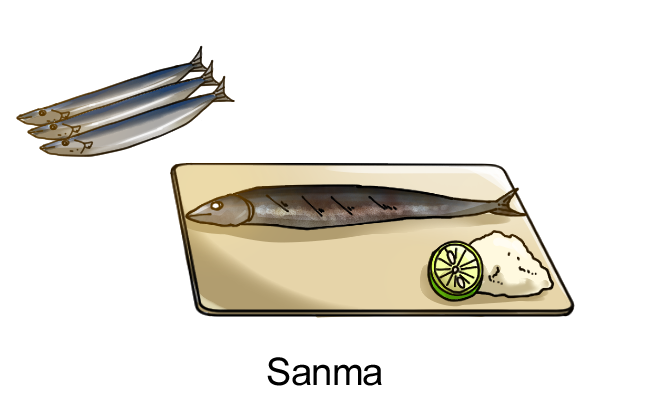 Sanma is so much synonymous with Japanese autumn fish that the kanji used for its name literally means “autumn fish in the shape of sword”—making reference also to the fish’s long length (averaging 36-41cm), slim shape and shimmering silver appearance. Sanma is highly nutritious—rich in good fatty acids, calcium, protein, iron, A and B vitamins, and an old Japanese saying goes, “sanma ga deru to anma ga hikkomu” - “when the sanma come out, the masseuse stays home”.

In autumn, sanma is fatty and sweet, caught mainly in the north eastern areas of Japan as the fish swims south from Hokkaido. The further south it’s caught, however, the less fat it contains as this wears off during its travels. Sanma is enjoyed in Japan in many ways—eaten raw, it may be served as sashimi or as a nigiri topping, usually served with minced ginger or sliced myoga and finely sliced negi. Cooked, the most common way of eating sanma is grilled whole—preserving its elegant form—and served with daikon and citrus to balance the richness and any bitterness. Being both delicious and nutritious, it’s no wonder why sanma continues to endure as a popular Japanese seafood. 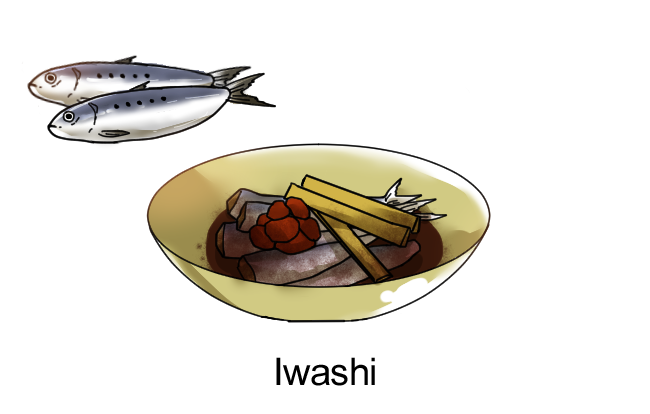 Sardines are sleek and silvery, with characteristic black markings along their sides, and as they’re rich in omega-3, they are considered a “brain food.” Sardines are populous in around Japan, and come into season from September to November when they are preparing to spawn. They become especially oily and fatty and are actually called ma-iwashi or aki-iwashi (“fall sardines”) around this time. More than a Japanese seafood, Iwashi is also considered a symbol of autumn in Japan--the high cirrocumulous clouds appearing in fall throughout some regions of Japan are known as “iwashi-gumo” (“sardine-clouds”)!

Iwashi can enjoyed in autumn as a nigiri topping, where it often comes zuke-style, marinated in vinegar a little to remove the fishy flavor. It can be filleted, minced and shaped into balls known as iwashi dango, which are steamed or added to soups. A popular traditional sardine dish is iwashi shoyuyaki, where the fish is simmered in sake, soy and ginger. Sweet and savory iwashi shoyuyaki goes perfectly with beer, making for a warming treat in the cooler autumn months. 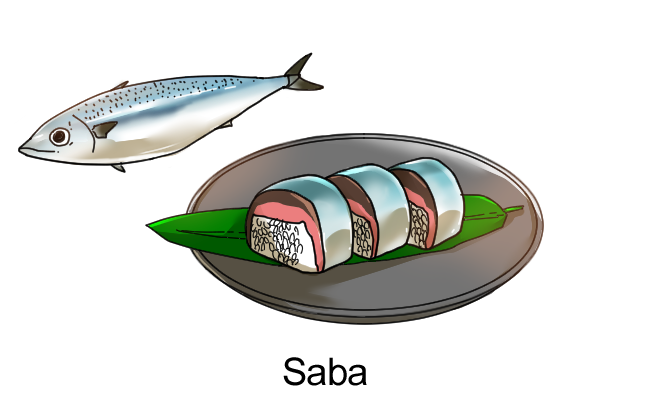 Saba is predominantly caught off the coast of the Ibaraki, Nagasaki and Shizuoka prefectures. With its silvery-blue appearance, this Japanese autumn fish is a variety of aozakana (blue fish), along with iwashi and sanma—and, like the others, comes into its prime during the cooler months before the onset of winter. At this time the saba have plumped up for the cooler weather, and the extra fat gives the flesh a silky smooth texture and more gentle flavor.

The freshest saba can be eaten raw as a neta (topping) for nigiri, or as sashimi. This Japanese seafood staple can also be marinated in vinegar (shime saba), a variety that has been popular since ancient times and revered for its deliciously savory and slightly vinegary taste. Saba shioyaki—salted and grilled saba—is one of the most common ways the fish is enjoyed, and saba misoni—saba stewed in miso—is a favorite home-style preparation. 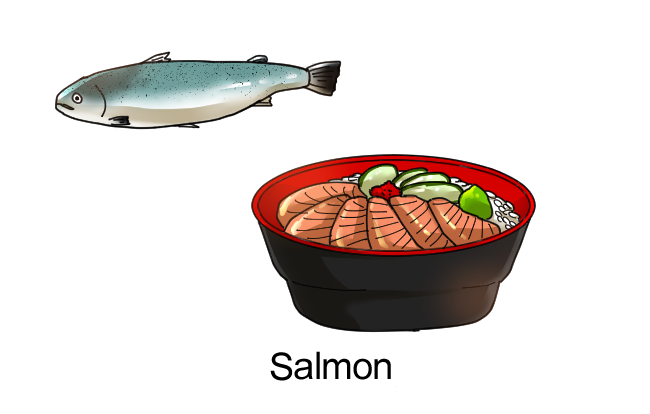 While salmon can be found all year round, it's regarded as being most delicious from September until February, when it returns from the sea to the rivers to spawn and is therefore enriched with extra nutrients and fat. The salmon that has just arrived into the river mouths is considered the best. The largest hauls are caught in the Hokkaido and Tohoku regions, and the river north of the Yamaguchi Prefecture. In these areas, salmon fishing is a popular autumn pastime.

Salmon is commonly eaten raw, as sashimi, or as sushi. Sake-don, a bowl of rice topped with raw salmon slices is one of the most popular varieties of donburi. Cooked, salmon is often coated in marinades like shiokoji (salted koji) and saikyo miso (sweet white miso), which provide the fish with an added salty or umami dimension when grilled. Foil-baking is another simple and delicious way to savor this Japanese seafood. 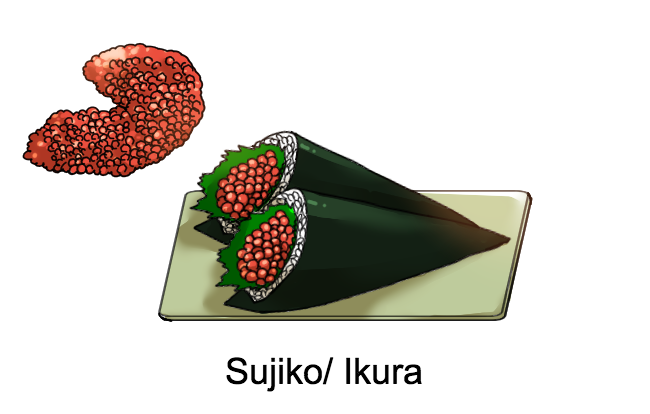 Sujiko and ikura are the Japanese names given to salmon eggs. Where sujiko are still intact in the sac extracted from the salmon, ikura are eggs that have been separated, rinsed, and cured in soy sauce or salt. While raw sujiko have a stronger and more intensely fishy flavor that may be difficult to palate for first-timers, ikura has a subtly briny flavor and slight sweetness that even Japanese seafood novices can enjoy. Because both sujiko and ikura look like glittering ruby spheres, they are called “jewels of the sea”—they even make a tantalizing popping sensation in the mouth when eaten. Both are used to add decorative and flavorful touches to dishes, as well as being popular sushi ingredients—ikura in a gunkan-maki, sujiko as a nigiri neta, or either wrapped in rice and seaweed as temaki. 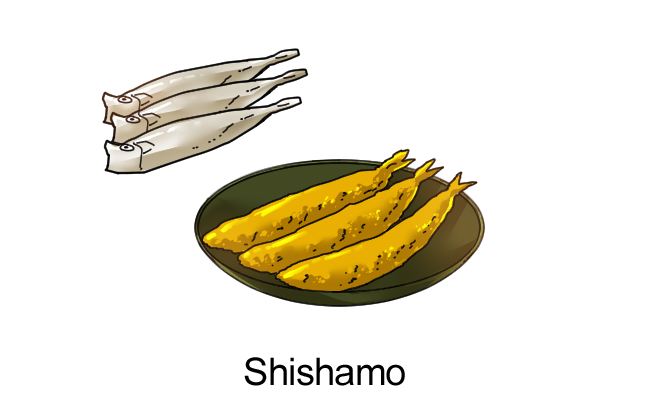 Shishamo are a slim variety of Japanese saltwater smelt fish just 15 cm long, with a silver underside and darker backside. Unique to Japan, this species of Japanese autumn fish can only be found along the Pacific Coast of Hokkaido, and the small hauls and delicate flavor make them highly prized. Shishamo are caught in during the fall season in the river mouths when they, like salmon, return from the ocean to lay their eggs. Due to their roe-carrying state, known as ko-mochi, they are regarded as being most tasty at this time of year.

Shishamo are typically grilled whole, and can be eaten in their entirety, often served with daikon oroshi and soy sauce, or plain if they are salt-grilled. For two weeks in autumn this Japanese seafood can be eaten as sashimi, an extremely small time window that makes raw shishamo a rare delicacy. However, most shishamo are dried immediately after catching to preserve their freshness. The traditional method of drying shishamo is to hang and dry them slowly in the seabreeze, giving the fish a sweet and juicy flavor. 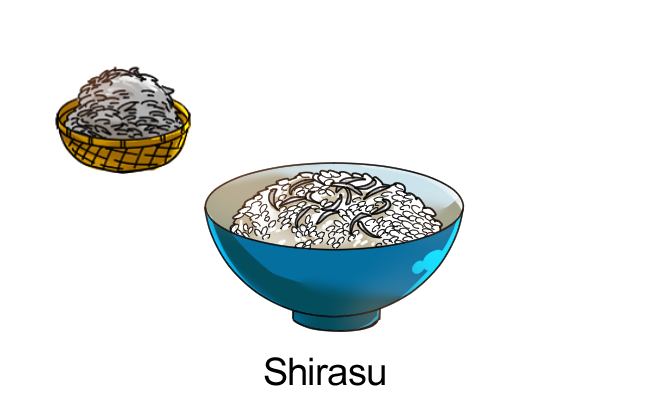 Shirasu—snow-white, transparent, and just 2cm in length—can refer to the juvenile forms of Japanese anchovies, sardines, eels, and pacific herring, although the sardine and anchovy varieties are the most common. These fish spawn during early spring and again in late summer, and once the larvae has aged 1-2 months it’s considered to be shirasu. Prime harvesting season is October to December, during which time, the texture is especially “puripuri,” or plump and juicy. The Shonan and Yaizu areas of Shizoku are the nation’s leading production areas for shirasu, and Shonan is even famous for its local specialty ‘shirasu burger.’

Shirasu are popular raw, dried and cooked. As they are so small and tender, with a gentle and remarkably non-fishy flavor, shirasu are eaten whole. When raw, they are most popular eaten as a salad with ponzu or on top of a rice bowl (nama shirasu don), with condiments of ginger, spring onions, shredded nori, raw egg, soy sauce, wasabi. When dried, they’re known as known as “chirimen jako” or “shirasu boshi,” depending on how much they’ve been dried, and used in dishes to add little salty, meaty bursts of flavor. Finally, kamaage refers to boiled shirasu. In these forms Shirasu are used to flavor everything from onigiri to ramen, pasta, pizza, salads and more, making them the perfect complement to a variety of culinary styles. 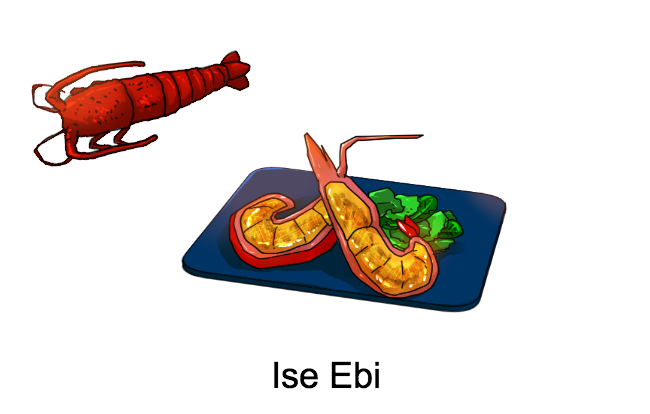 Although called ebi, meaning prawn in Japanese, Ise ebi is actually looks more like a lobster. An elaborate-looking crustacean with transparent, rich-tasting meat, Ise ebi is regarded as a luxury food. It is a specialty of the Shima peninsula in Mie Prefecture, which faces onto Ise Bay, where the warm, shallow sea waters provide idyllic conditions for the lobster. The peak season for Ise ebi is said to be with the onset of ‘the cold waves’ from October to January, when its flesh is particularly sweet and firm--it’s no wonder why this lobster has been a popular Japanese autumn food for thousands of years!

Ise ebi is often cooked whole, steamed in sake or cooked on a grill. It features on many teppanyaki menus, where its decorative form is split down the belly and grilled on a teppan grill in front of diners. When Ise ebi is served as sashimi, or with the meat battered and cooked tempura-style, the dish usually comes with the meat carefully placed back into or nearby the ornamental shell. As Japanese seafood goes, Ise ebi is as pleasing to the eye as it is to the stomach.

Eating food in its seasonal prime gives great local insight into why Japanese people look so forward to certain months of the year—not to mention the chance to experience the flavors of the country’s world-famous cuisine at their peak. Whether you choose to eat autumn seafood raw, grilled, stewed, or prepared through other delicious and creative Japanese cooking methods, you'll be thankful for the taste of Japanese seafood at its best.