Okayama Food: Legendary Cuisine from the Land of Momotaro

Okayama Food: Legendary Cuisine from the Land of Momotaro

Okayama is home to one of Japan’s most famous fairy tales, the legend of Momotaro. A popular folk hero, Momotaro was born from a giant peach and bravely fought demons with his trusty animal companions—a dog, a monkey, and a pheasant at his side—gaining lasting friendships through the sharing of good food. But there’s more to Okayama than being the setting to this legendary peach boy; here are 12 must-try Okayama foods, from barazushi to kibi-dango!

12 Must-Try Okayama Foods from the Land of Momotaro

Just east of Hiroshima along the Seto Inland Sea lies Okayama prefecture, a gourmet region that’s frequently overlooked by foreign visitors. The prefecture is rich in seafood; and with plenty of sunshine and fewer rainy days than other areas of Japan, Okayama is famously nicknamed “The Sunny Land,” which makes it perfect for fruit farming.


There’s plenty to see and do in Okayama and, of course, an abundance of things to eat. Keep reading for a complete list of tasty regional Okayama cuisine to try! 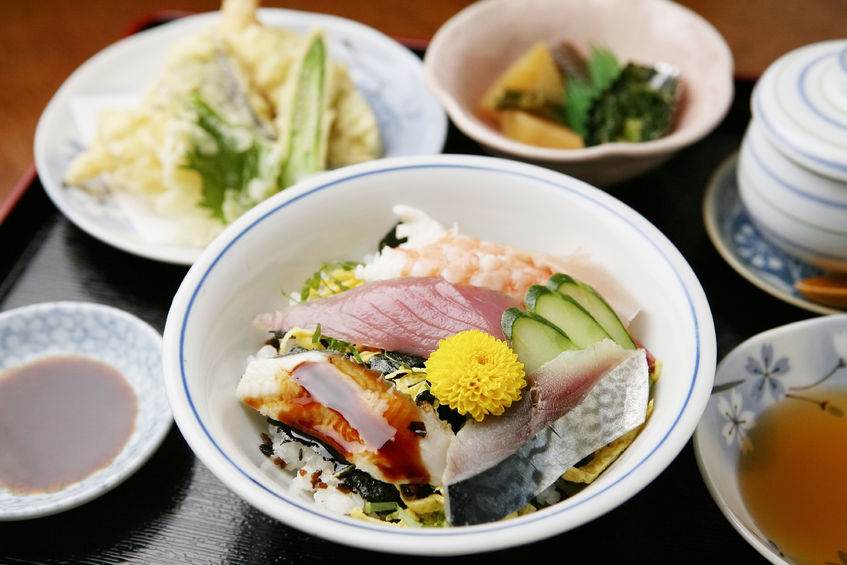 Barazushi is a local style of sushi that uses ingredients from all around the Chugoku region. It’s made with a bowl of sushi rice topped with over a dozen ingredients, from fish and seafood from the Seto Inland Sea to various vegetables like lotus root, carrots, and tender snow peas. Traditionally, commoners weren’t didn’t have the opportunity to enjoy lavish multicourse meals during the feudal era, so barazushi was a way for people to enjoy multiple ingredients in a single dish. 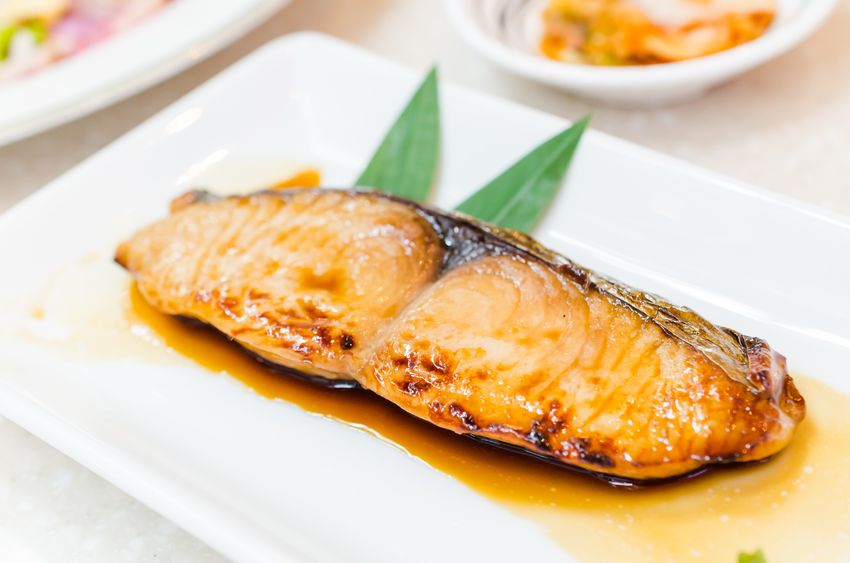 The most beloved fish in Okayama is sawara (Spanish mackerel), which is enjoyed in many dishes from fresh sashimi to shabu-shabu (hotpot). In fact, Okayama has the highest per capita consumption of sawara fish in all of Japan. With a sweeter and lighter flavor than other types of mackerel, sawara is both delicious and healthy, rich in omega-3 fatty acids. Fresh sawara is preferred by people who normally don’t like the oily flavor of other types of mackerel. 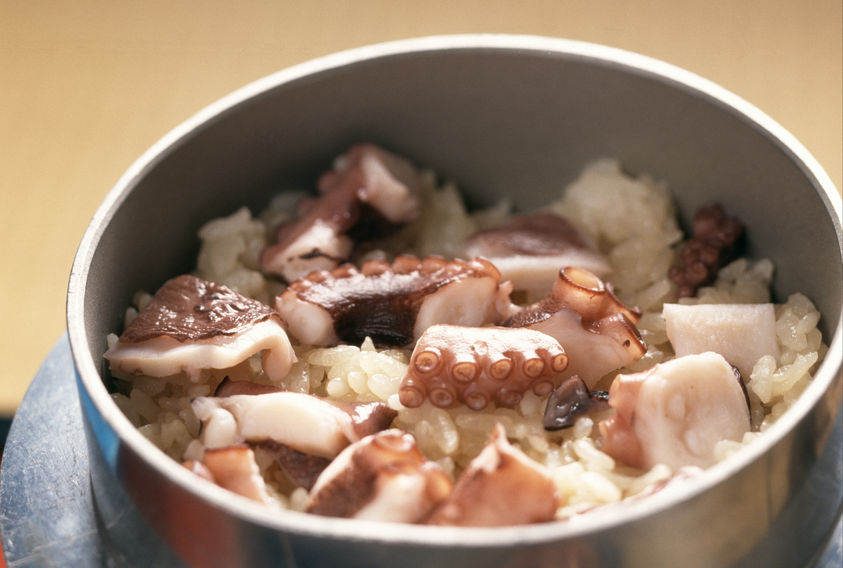 Another popular Okayama seafood dish, takomeshi (steamed octopus with rice) is local to Kurashiki, a port city famous for its succulent cephalopods. The dish features tender, chewy pieces of octopus steamed together with rice for a delicately aromatic meal. 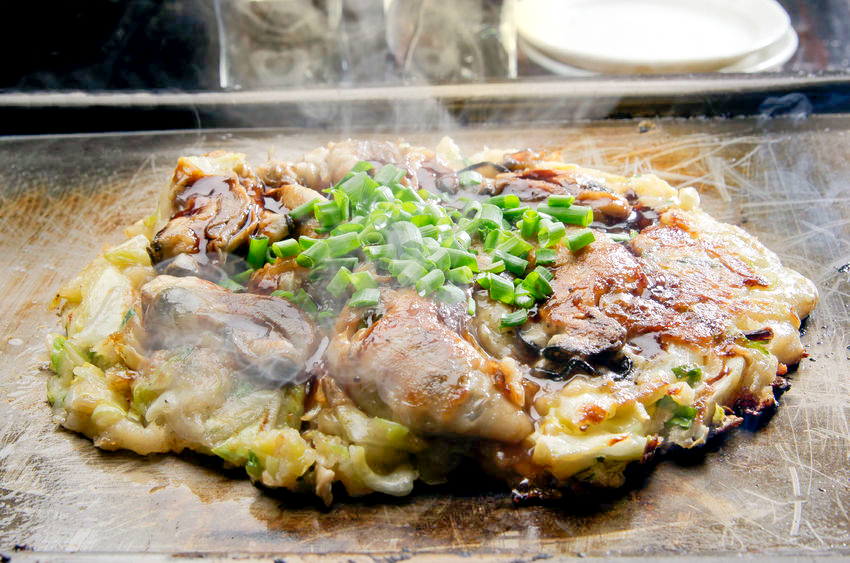 Osaka and Hiroshima are the two regions of Japan most famous for their okonomiyaki, a savory pancake made with a vegetable-filled batter. But Okayama, located between the two regions, also has its own delicious style called “Hinase Kakioko,” short for kaki (oyster) okonomiyaki. The dish originated in Hinase, the oyster capital of Okayama, and is made with thick and juicy grilled oysters, fresh from the Seto Inland Sea. 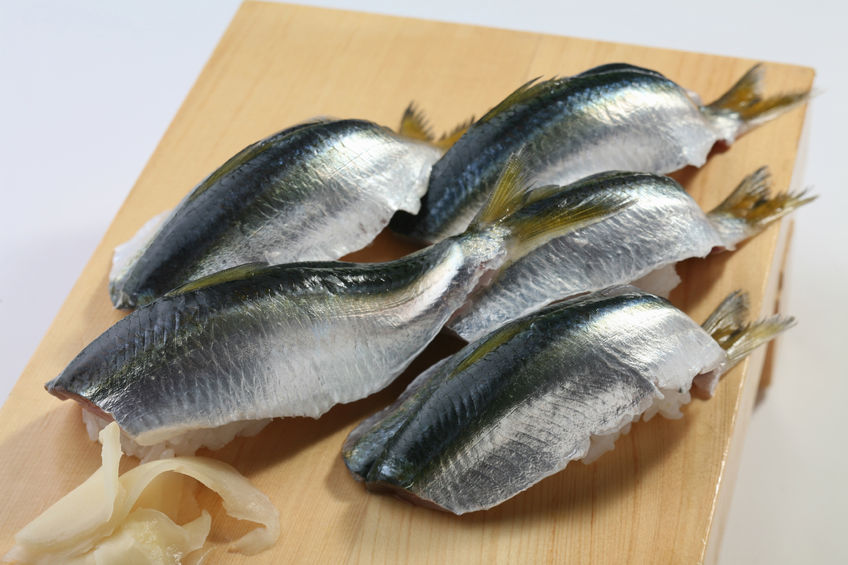 Mamakarizushi is an Okayama specialty made with pickled sappa fish, a type of small herring that’s freshest from February to April. The dish gets its name “mamakari,” which means “to borrow rice,” from the fact that it’s so delicious you’ll finish all your rice at home and need to borrow more from your neighbors. 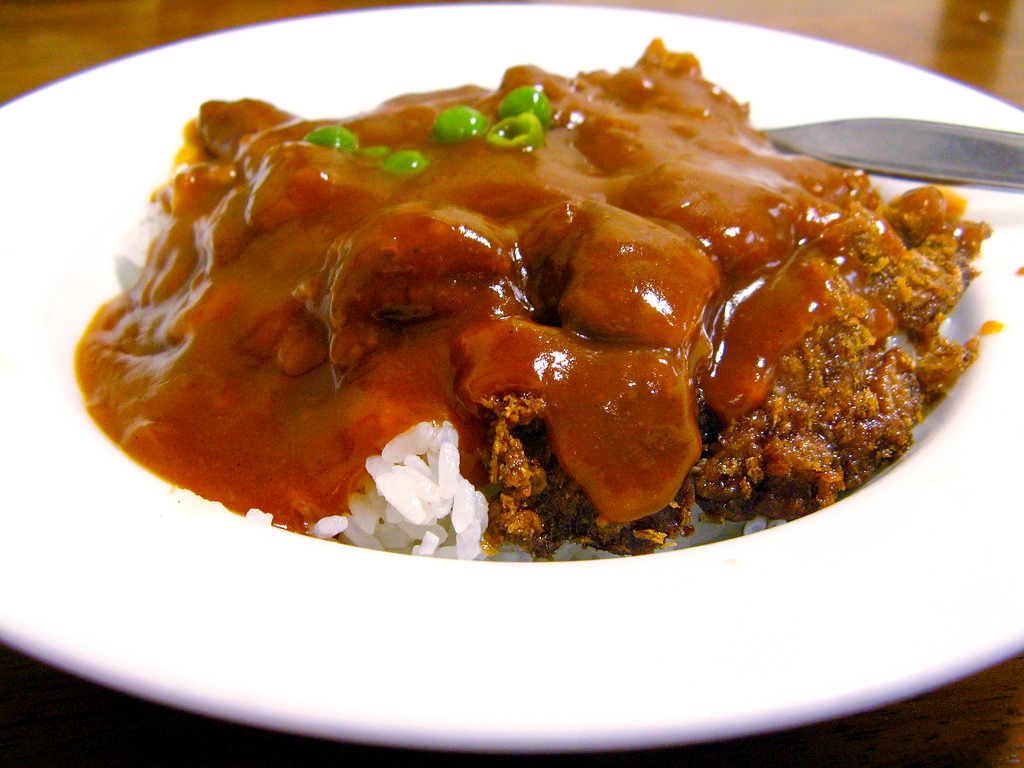 Demi-katsudon is an Okayama dish inspired by yoshoku, or Japanese-style western cuisine. Typically, katsudon is made with a crispy fried pork cutlet cooked with eggs in a soy sauce and dashi broth. However, Okayama demi-katsudon is cooked in a demi-glace sauce, similar to yoshoku dishes like omurice (omelet rice) and hambagu (Hamburg steak). It’s served on a bed of thinly shredded raw cabbage over a bowl of rice. 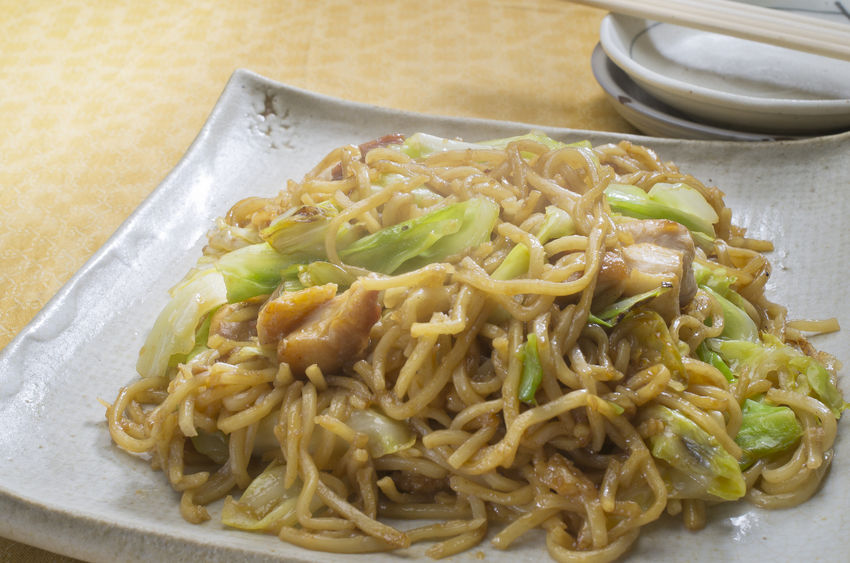 Hiruzen yakisoba is a style of stir-fried noodles that can only be found in the Hiruzen plateau area of northern Okayama, which is known for its dairy resorts and winter skiing. While yakisoba is typically made with pork, in the Hiruzen area it’s made with large chunks of locally raised chicken that are stir-fried together with cabbage and noodles in a light sweet-and-spicy miso sauce. 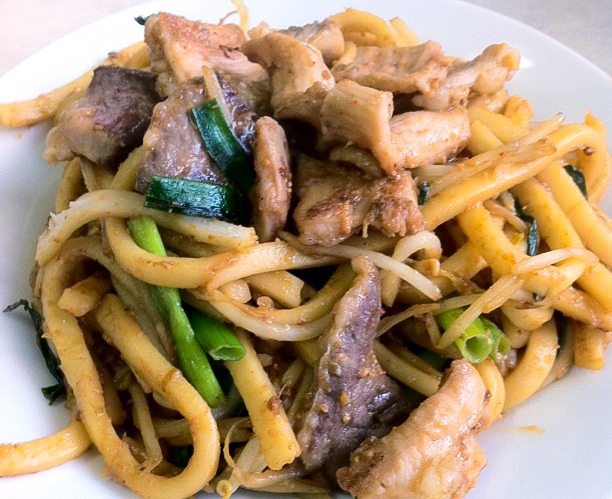 Compared to the mild flavor of Hiruzen yakisoba, the local dish of Okayama’s Tsuyama City, horumon udon, has a much bolder taste. The blue-collar dish is made with grilled offal and udon noodles cooked on a teppan griddle with a strong miso sauce that stands up well to the bold flavor of the organ meat. 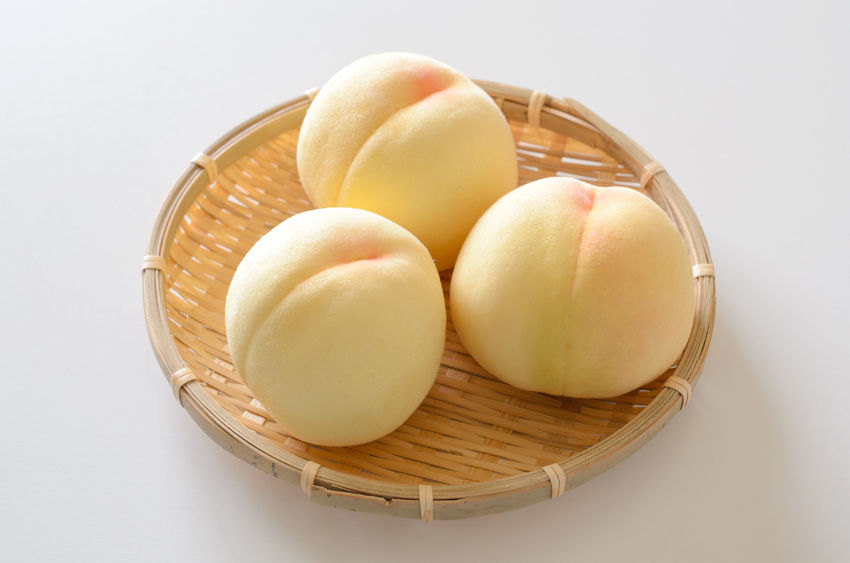 The most famous ingredient from Okayama, succulent white peaches come into season beginning in June, fetching as much as 1,500 yen per peach. There are a number of white peach varieties cultivated in Okayama, which allows people to indulge in the fresh fruit throughout the summer months. Peaches, or “momo” in Japanese, also have a special cultural meaning in Okayama as the hero of the Momotaro folk tale is said to have been discovered by his adoptive parents in a giant white peach floating down the river in this very prefecture. 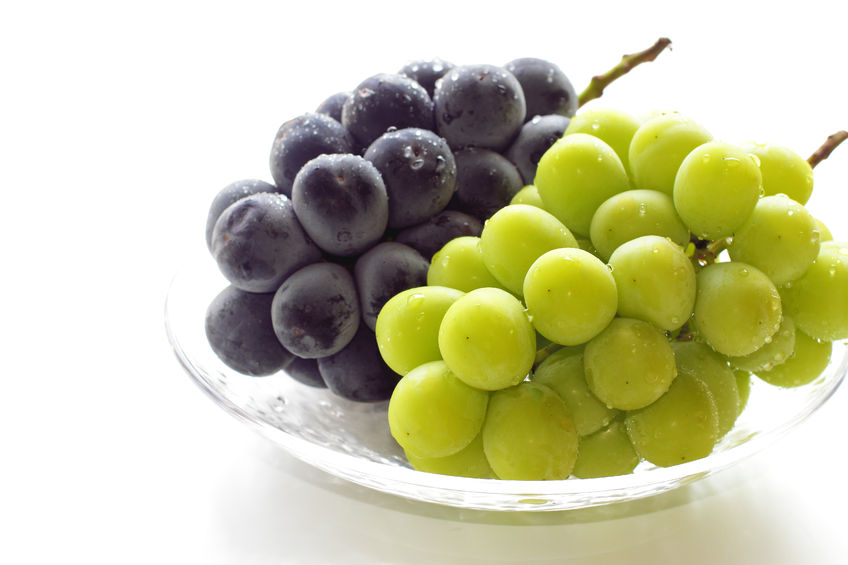 In addition to juicy peaches, Okayama is known for its fabulous grapes, in season from May to December. The most famous varieties include luscious muscat grapes nicknamed the “Queen of Fruits” and large seedless “Black Pearl” pione grapes, which have a deeply sweet and fragrant aroma. 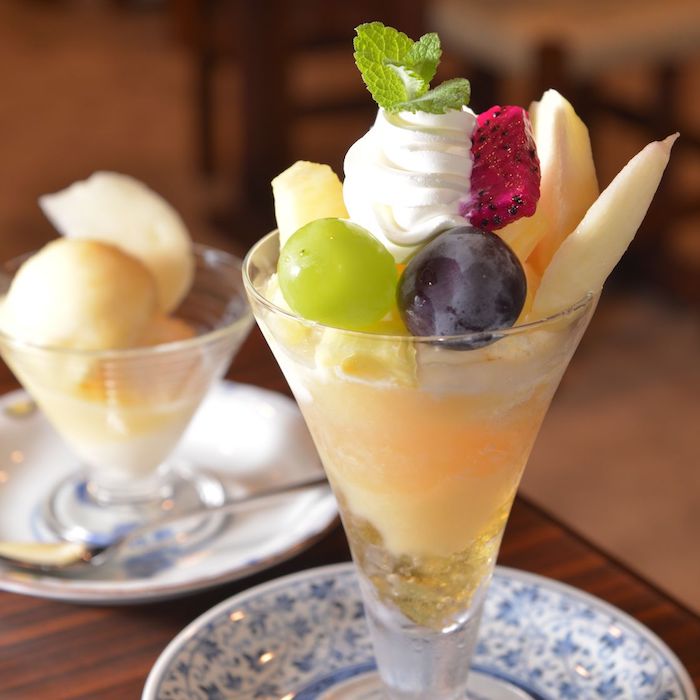 It’s no wonder that fruit parfaits are such a popular local dessert with the bounty of fresh fruit to be found in Okayama. Made with layers of creamy soft-serve ice cream, fruit jellies, whipped cream, and sponge cake topped with freshly cut fruit, Okayama’s parfaits are quite healthy and exceedingly decadent.

Read: A Guide to Japanese Parfaits—Layers of Dessert Luxury 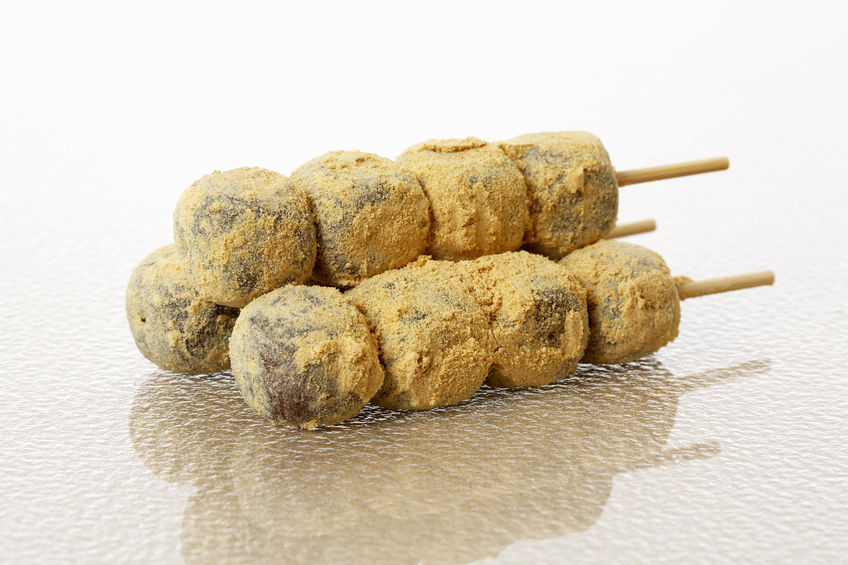 Kibi-dango is another featured food from Okayama found in the Momotaro folktale. These bite-sized sweets are said to be the food that Momotaro took with him on his demon hunting adventures and shared with his animal friends. The glutinous rice cakes have a fluffy yet chewy texture and come in various flavors from matcha to white peach. They can be found in JR Okayama Station and various confectionery shops around Okayama.

Try a Taste of Okayama’s Legend and Cuisine with Gurunavi

While Okayama is often overshadowed by the nearby cities of Kyoto, Osaka, and Hiroshima, the prefecture is full of delicious local dishes and some of the best fresh fruit in Japan. Be sure to visit Gurunavi’s listings for a number of great Okayama restaurants, and don’t forget to pick up some kibi-dango at the train station while on your way to your next Japan adventure. Itadakimasu!