Sushi comes in all different shapes and sizes, and one of the most easily recognizable forms is that of makizushi. Made with vinegared rice and select fillings wrapped in a sheet of nori, makizushi is rolled with a bamboo mat to create a perfectly cylindrical shape that is then cut into bite-size pieces. This rolled style of sushi is so popular in Japan that it can be found everywhere—from high-end sushi shops to convenience store shelves.

There are countless varieties of makizushi available to try. Here’s a rundown of the most popular.

Hosomaki is a category of sushi rolls that comes from the Kanto region of eastern Japan, centered around modern-day Tokyo, and typically features only one ingredient plus rice, rolled together tightly to create a thin roll. 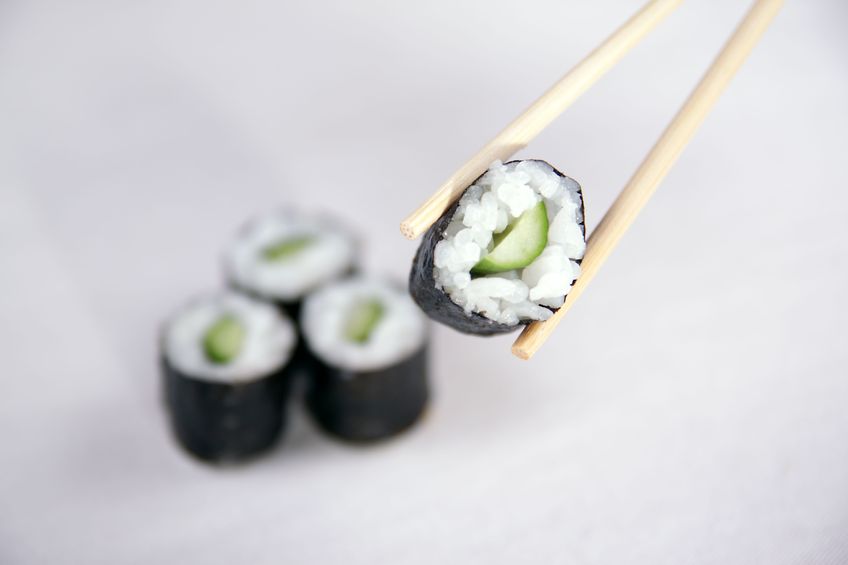 Kappamaki (cucumber sushi roll) is one of the most classic types of makizushi. Some people believe it’s named for the fictional water sprite called a “kappa” whose head resembles the top of a cucumber. 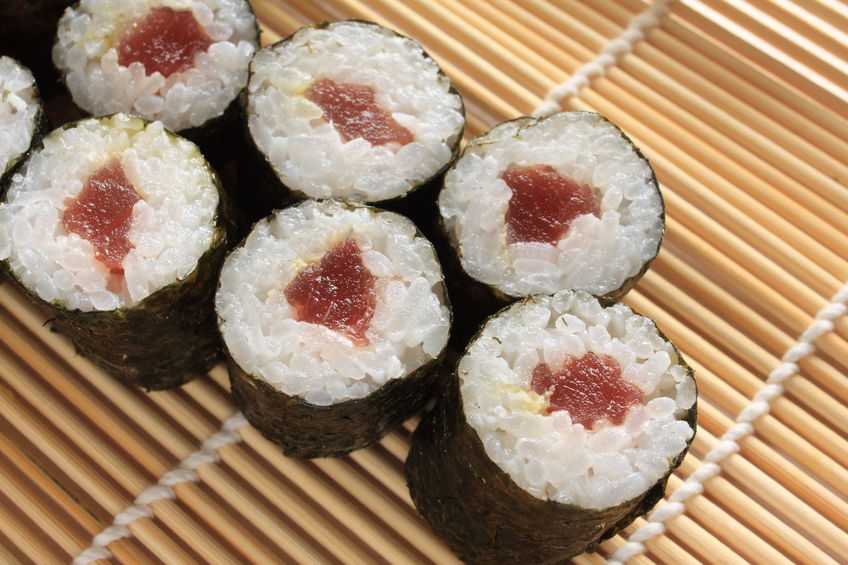 Tekkamaki (tuna sushi roll) is made using the lean cut of tuna called “maguro.” The name means “forged iron roll” and comes from the image of a hot iron rod glowing bright red. Along with kappamaki, this is another essential hosomaki roll. 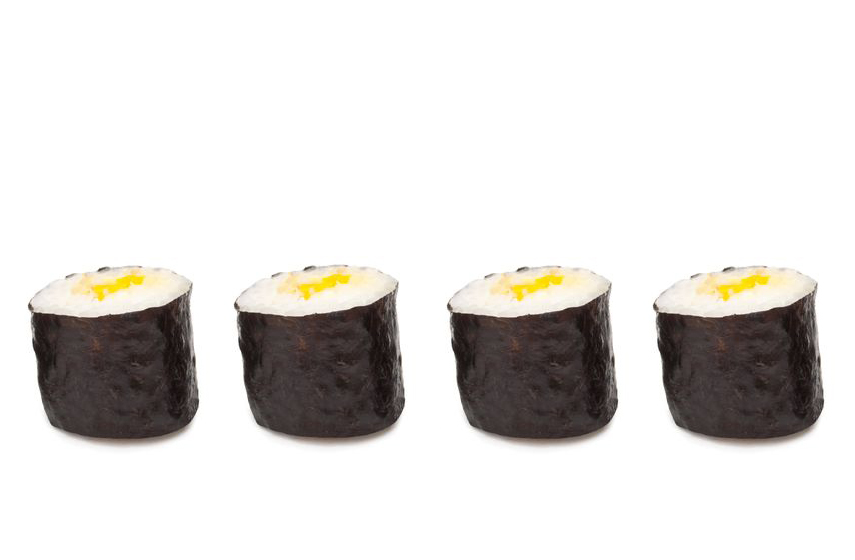 Oshinkomaki (pickled daikon radish roll) is a type of hosomaki made with a filling of crisp Japanese pickles, chopped finely. It’s often filled with a bright yellow variety of pickles known as “takuan” that is made with daikon radish. 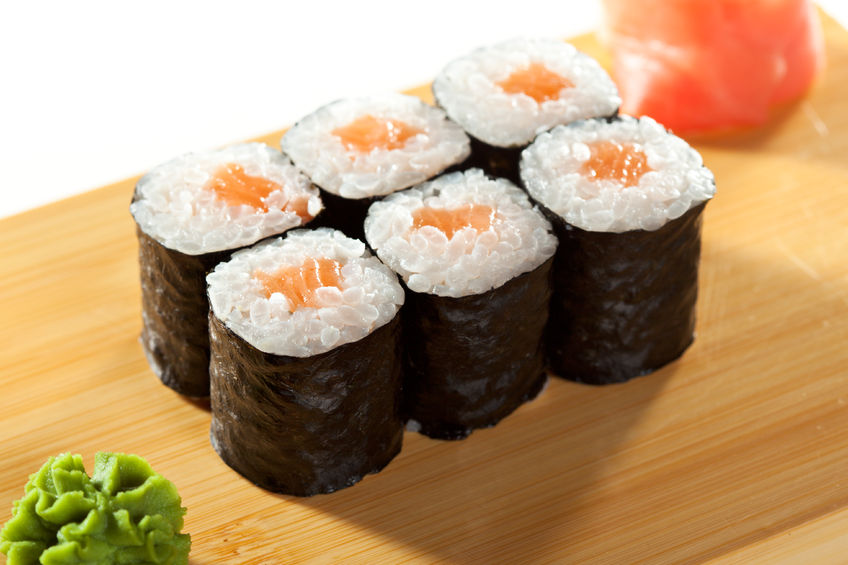 Salmon-maki is a type of sushi roll that has become popular in recent decades. That’s because raw salmon previously wasn’t eaten in Japan. The “Philadelphia roll” made with salmon and cream cheese found outside of Japan was inspired by this hosomaki. 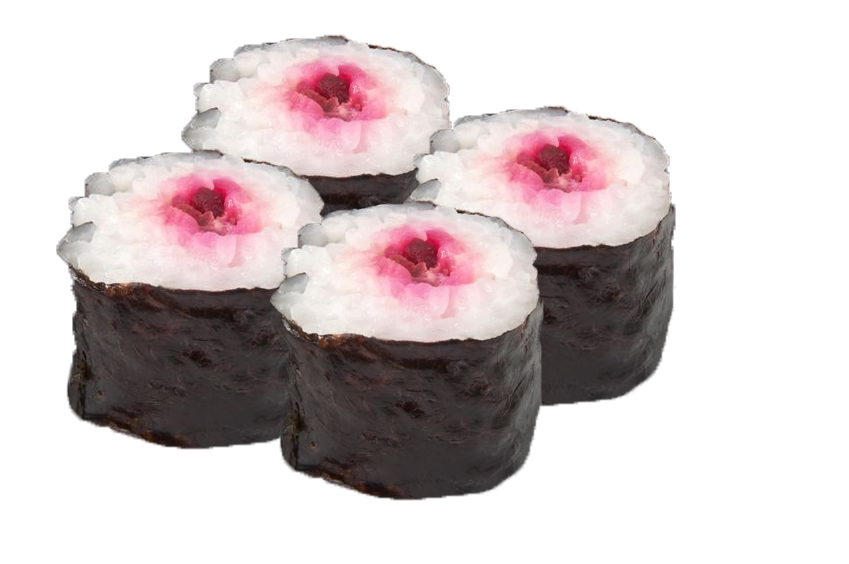 Shibazukemaki (pickled eggplant roll) is another hosomaki roll made with Japanese pickles. It’s easily recognizable by the bright purple color of its shibazuke pickle filling, a traditional pickle from the Kyoto region made with eggplant and cucumber. The pickles get their distinct color from red shiso herb. 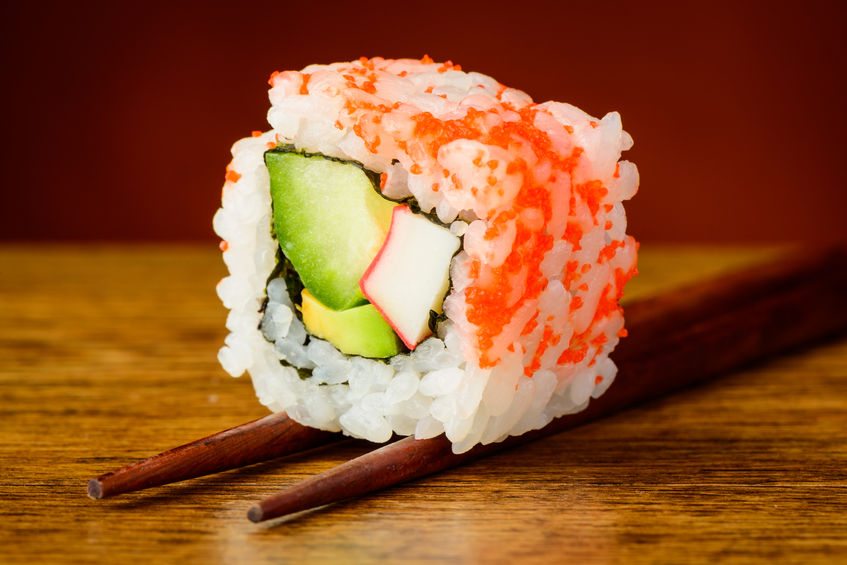 Uramaki is makizushi that’s inverted with rice on the outside of the roll, rather than nori. Usually, when making makizushi, a sheet of nori is placed first on the bamboo mat, followed by sushi rice and then the fillings. But for uramaki, rice is the layer closest to the bamboo mat, followed by nori, and then the fillings. The finished roll can be sprinkled with white or black sesame seeds or tobiko (flying fish roe) before slicing. 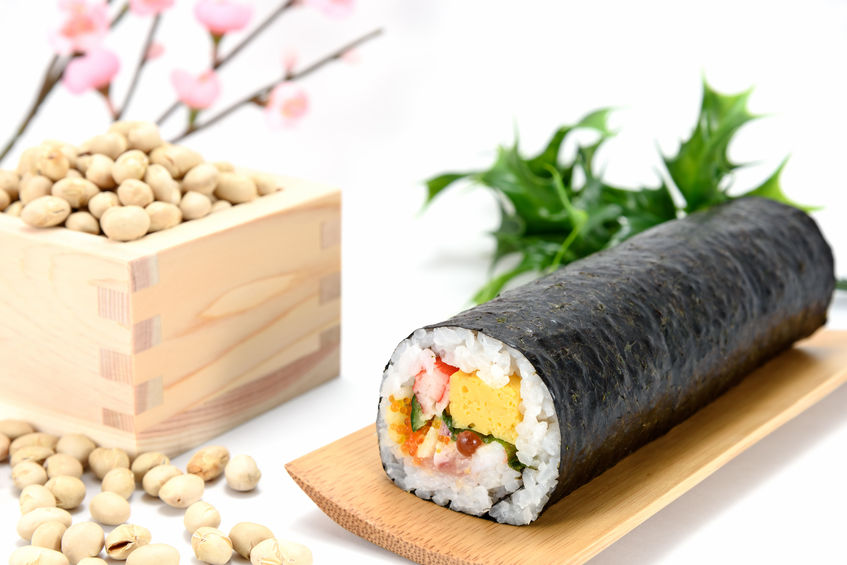 Ehomaki is a special-occasion makizushi that’s popular to eat during Setsubun, a Japanese holiday that takes place in February to celebrate the end of winter and the coming of spring. Unlike other types of sushi rolls, ehomaki is served as one long piece and is stuffed with numerous ingredients. The roll is eaten while facing in the designated “lucky” compass direction for the year, and is meant to be consumed in one go without stopping. 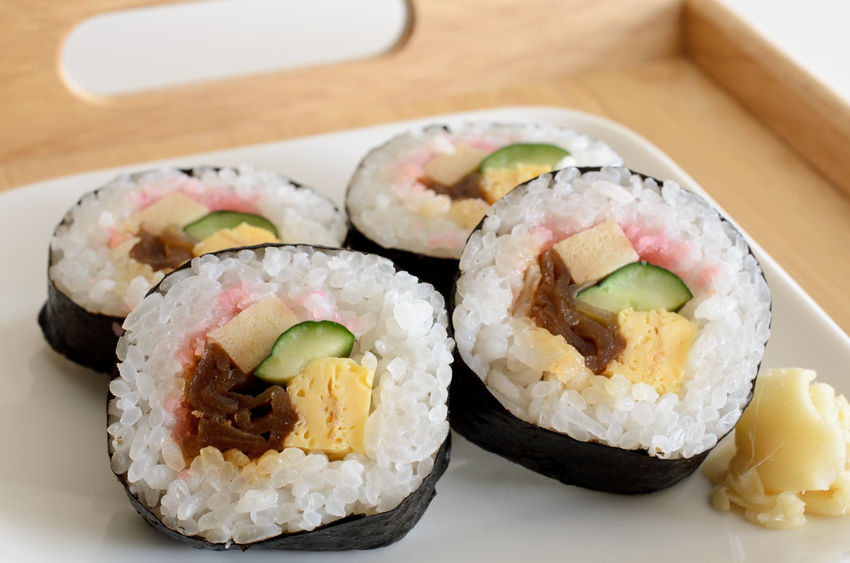 Whereas hosomaki rolls were traditionally popular in the Kanto region, the Kansai region around Osaka had its own variety of fatter makizushi stuffed with more fillings called “futomaki.” This bigger roll combines several ingredients like ehomaki, but doesn’t require seven fillings specifically and is sliced before eating. 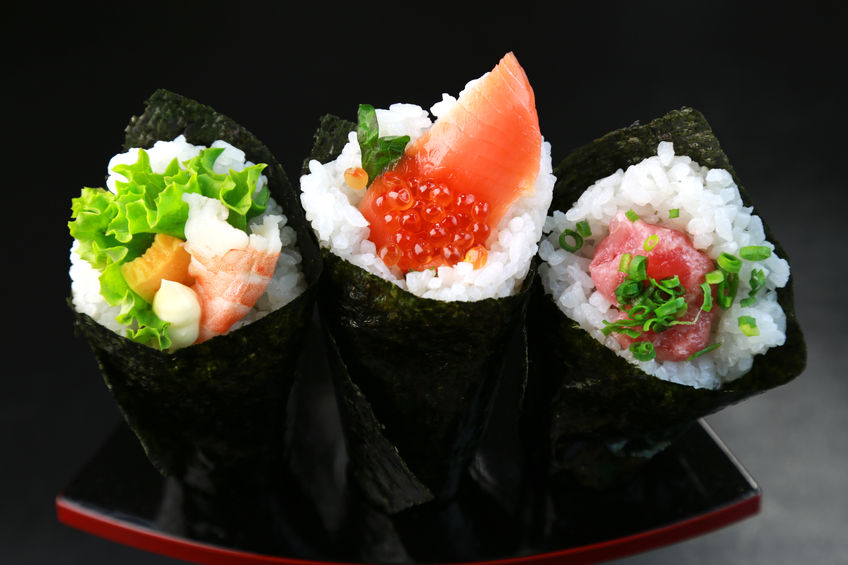 Temakizushi, or “hand roll,” is a type of makizushi made with a single small sheet of nori. Sushi rice and the desired fillings are added, and then the nori is rolled into a cone shape. Pretty much any sushi filling can be used for temaki rolls, so it’s very easy to customize to individual tastes. The cone also makes it very easy to hold and keep the filling from falling out while eating, even for people who don’t use chopsticks. 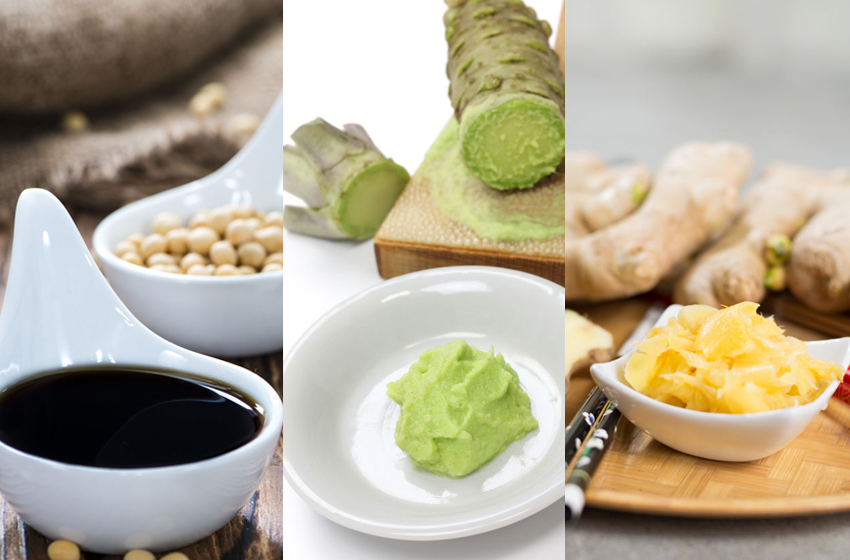 The typical condiments served with makizushi are soy sauce, grated wasabi, and gari (pickled ginger). If the rolls are made to order, you can request them with or without wasabi included inside.

Pour a bit of soy sauce, but not too much, into the small dish provided for dipping and lightly dab each piece just before eating. Take care not to leave the sushi in the soy sauce for too long as this can cause the rice and fillings to become damp and fall apart.

Take bites of the pickled ginger in between sushi rolls, but avoid piling the ginger on top of the sushi and eating them together. That’s because the ginger has an overpowering flavor that is meant to cleanse the palate between bites, rather than be eaten with the sushi.

How to Eat Makizushi 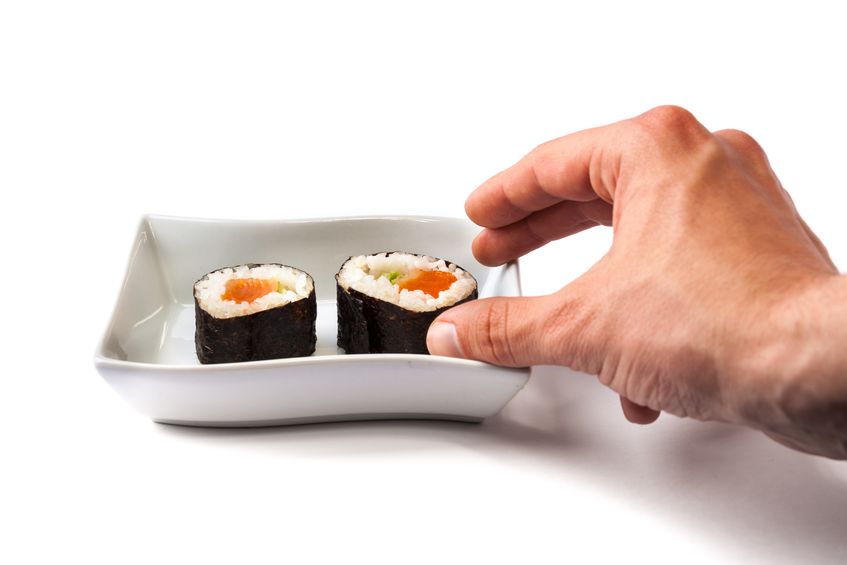 Makizushi is very easy to eat as most kinds come pre-sliced. Simply pick up a piece either with chopsticks or by hand, and eat in one clean bite. Make sure to eat everything together rather than picking out individual ingredients.

When dining at a sushi restaurant, for an omakase course where the sushi is selected by the chef, makizushi is traditionally served near the end of the course. If you’re dining à la carte, ordering makizushi toward the end of your meal is a good way to signal to the staff that you’ll be ready for the check soon.

Enjoying the Best Makizushi in Japan Begins with Gurunavi

Makizushi is a delicious and easy way to enjoy sushi in Japan and comes with a wide variety of fillings suitable for vegans, vegetarians, and people who don’t eat meat or shellfish. Check outGurunavi’s sushi restaurant listings for the best places to enjoy makizushi wherever you are in Japan. Itadakimasu!