Beginner's Guide to Yakiniku: How to Cook Wagyu Beef

Beginner's Guide to Yakiniku: How to Cook Wagyu Beef 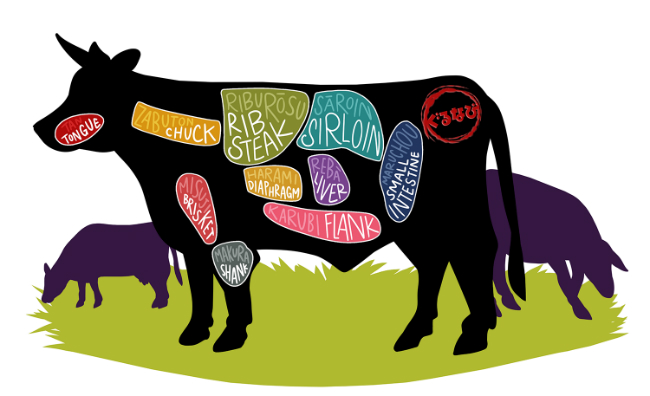 Nothing is more American than steak and potatoes, or more English than roast beef and Yorkshire pudding. But while beef is easy to come by in these countries, finding a cut so sublime that it melts in your mouth is nearly impossible. To find such a cut you need to travel to Japan where special breeds of cattle, called wagyu, elevate the flavor and texture of grilled steak to an art form. For any epicurean traveling to Japan who makes beef a regularly addition to their weekly diet, be sure to read this article before your first foray into yakiniku.

What Is Wagyu Beef?

Japan is known around the world for its tender, high-end beef, yet the ins-and-outs of Wagyu beef still remain something of a mystery to people outside of the country. The term “Wagyu”, which means Japanese (“wa”) and cow (“gyu”), essentially refers to several breeds of Japanese cattle that have been domesticated from wild oxen. The most common breed is the Japanese Black, which makes up around 70 percent of cattle in Japan and includes the famous Kobe beef brand.

Beef in Japan is graded by both yields—the proportion of meat available, rated from A class (the highest) to C class (the lowest)—and marbling. It’s also rated on its color, texture, and the quality of fat, then given a marbling grade from 1–5. A5 Wagyu is the highest class of Japanese beef and has superior marbling. This intense marbling is what gives the beef its unique tenderness and “umami”, or savory flavor.

In Japan, Kobe beef is always at least grade A4–5 or B4–5. Another highly prized Japanese beef is Matsusaka beef, which can be considered Kobe beef’s rival and is often described as having a more intense beef flavor. To give a good idea of the richness of Wagyu beef, a highly graded non-Japanese steak usually contains around 6% marbling, whereas an A5 Wagyu steak can contain as much as 25% marbling. For the record, the “Kobe beef” sold outside of Japan is typically beef that comes from a cross between Wagyu cattle and a domestic cattle. So if you’re dining on Kobe beef (especially in your home country), you’ll want to make sure you’re getting the real deal.

How to Cook Japanese Yakiniku

Yakiniku is the name for barbecue in Japan. Because it focuses on drawing out the natural flavor of the meat, many cuts of beef do not come marinated or pre-seasoned. Additional seasoning is often no more than a bit of salt, a squeeze of lemon, or a splash of “tare” (dipping sauce) after the meat has been grilled. Because of the focus on the flavor of the beef, yakiniku requires high-quality ingredients as well as extra care so as not to overcook it and ruin the beef’s intricate flavor and texture. Here are four general tips that should be applied with any cut of meat.

･To start with, whether you’re cooking over a traditional charcoal grill or a flat teppan cook surface, you’ll want to wait until the grilling surface becomes very hot or else the meat can stick to the metal.

･It’s also important to consider the order of grilling meat in order to avoid any flavor contamination.

･Make sure to grill and enjoy each piece one at a time to prevent the temperature of the grill from falling, or if you’re cooking several pieces together, remember the order that you placed them on the grill so that none of the pieces are overcooked.

･Thinner, more marbled slices of beef may require only 3–5 seconds of grilling, while thicker or leaner pieces may need a couple of minutes to cook properly.

If you’re wondering how to cook yakiniku, here’s a breakdown of some of the most popular cuts of Wagyu beef, as well as how and when to prepare them:

Gyutan, or Japanese beef tongue, is considered a delicacy in Japan. It’s sliced very thinly and cooks fast, so as soon as the meat starts to curl, you’ll want to flip it over quickly. It’s popular to grill one side of gyutan well while leaving the other side a bit rarer. Beef tongue should be grilled before other cuts or on a newly replaced grill so that its distinct flavor is not contaminated by anything else. 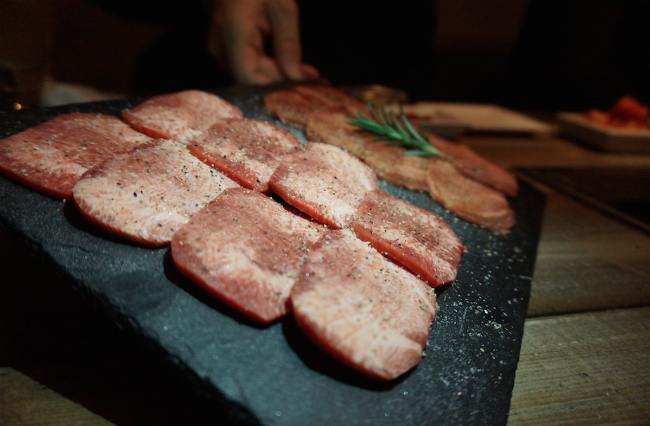 After gyutan, it’s common to follow up with lighter flavored muscle cuts such as rib roast and then proceed to heavier marinated cuts and organ meats, like harami. 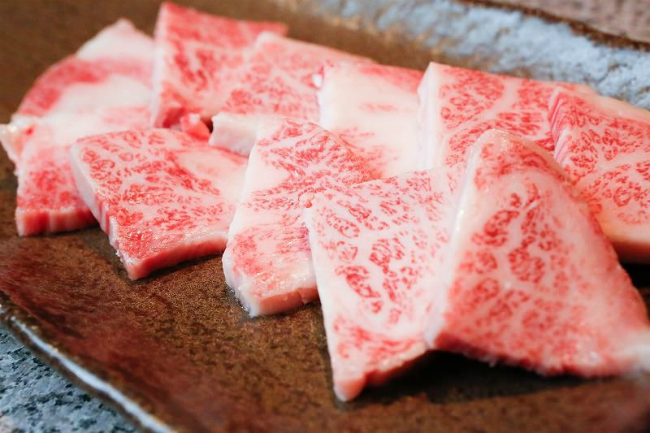 Karubi, or boneless short rib / flanken-cut rib, is one of the most popular cuts of beef for yakiniku. Tender and very juicy, karubi has more marbling than roast cuts do. Go for “sankaku karubi” or “jo-karubi” if you want an especially marbled piece. For the best flavor, cook for 80 percent of the time on one side until the meat has a nice grilled color, and only 20 percent on the other side. Because of its heavy marbling, a slice of karubi around 3 mm (1/8 inch) thick can be ready to flip in as little as 10 seconds. 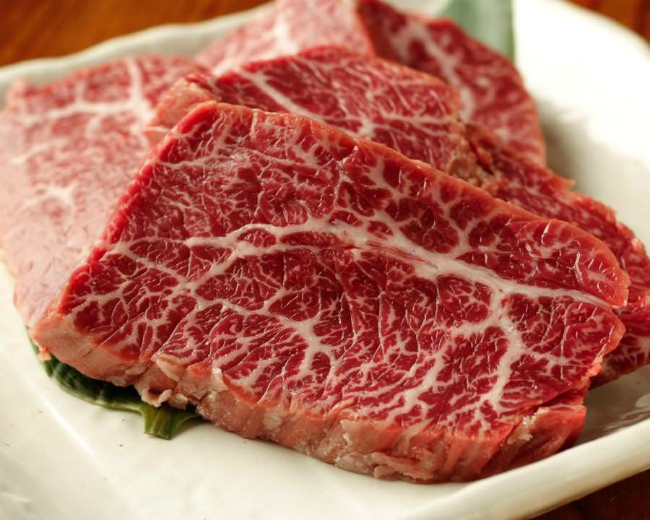 These are the lean cuts of meat from around the shoulder and back. Roast refers to the leaner shoulder meat, while rib roast is adjacent to the sirloin and has a bit more marbling. Despite being leaner, roast meat is still quite tender. It’s usually served in thicker cuts, so it takes a bit longer to cook. Once it’s on the grill, wait until the bottom is nicely browned and the juices come up to the surface before flipping it over. You may also see “jo-rōsu” (上ロース), or “special roast”, on some menus, which indicates even more marbling for a richer and tenderer cut of meat. 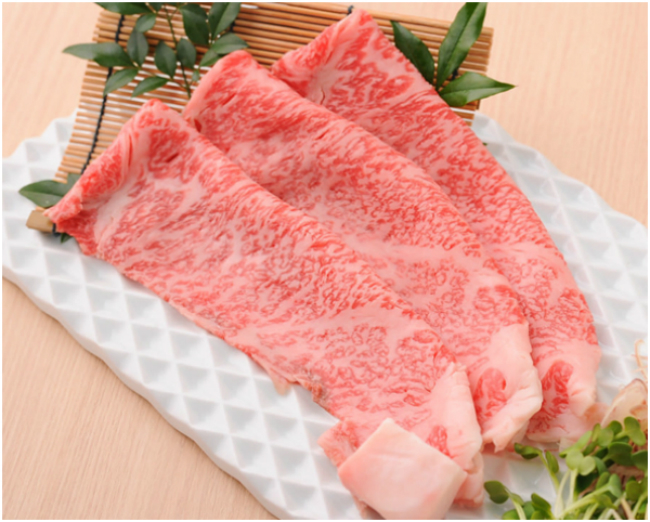 Sirloin comes from the back area and is one of the highest quality cuts of beef. Steaks are cut from the sirloin area due to its excellent flavor, tenderness, and juiciness. To cook wagyu steak, you’ll want to grill it until the outside has a nice color while making sure that the center is still rare. 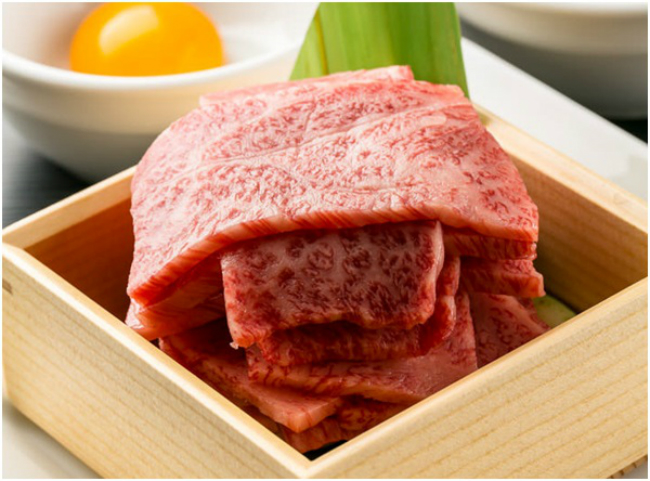 Zabuton, or chuck, is a flavorful cut of meat from the ribcage area that’s known to melt in your mouth. It’s a rarer cut of beef because there’s not as much zabuton meat compared to other cuts, so it’s sometimes sold as “jo-rōsu”. 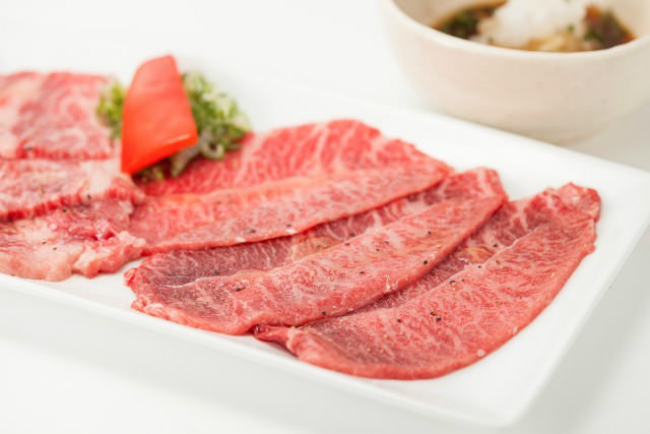 Misuji, or brisket, is the cut of beef that’s under the shoulder blades. Like zabuton, it’s also a rare cut because there is not much misuji meat compared to other cuts of beef, so it often comes at a premium price.

Makura, or shank, comes from the lower leg area. It has a deep flavor due to the leg being a heavily exercised muscle. 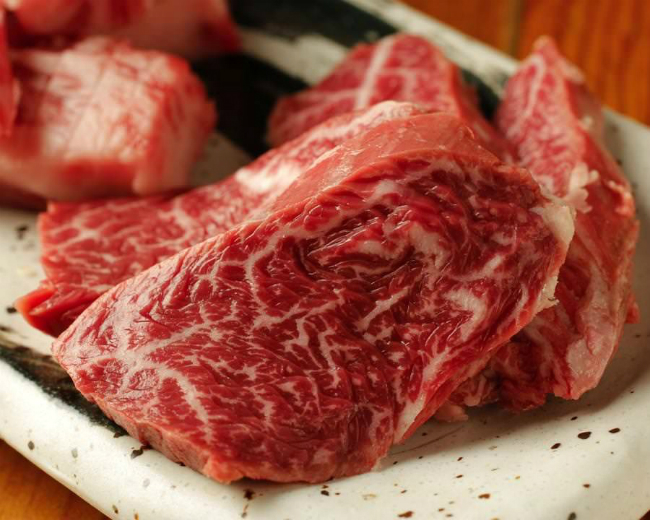 Harami, or skirt steak, comes from the diaphragm area so it has a bolder flavor than other cuts of meat. These cuts often come marinated in miso or soy sauce due to their strong flavor. Harami should be cooked for a bit longer until it’s well grilled on the outside but still tender on the inside. Extra marbled and tender harami is sometimes sold as “jo-harami” or “special harami”. 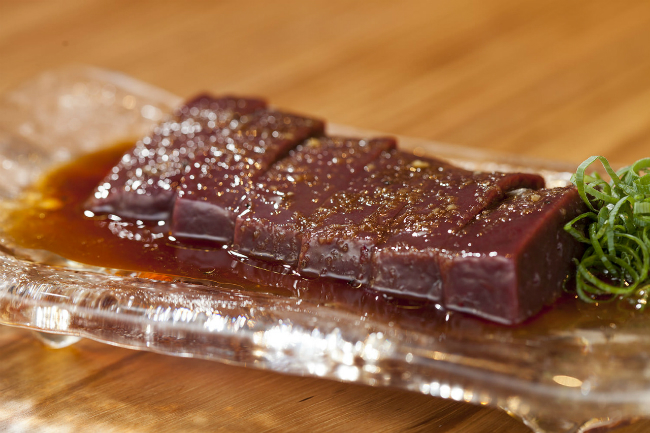 This cut is a good source of iron and has a distinct flavor. Because it’s organ meat, you’ll want to make sure that it’s well cooked before eating. 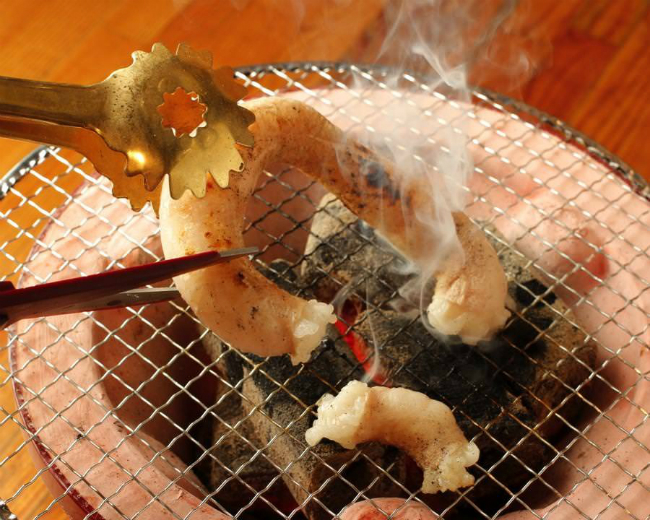 These are the small intestines, which may not sound appetizing at first, but they’re a popular yakiniku item to have with alcohol due to its strong, distinct flavor. Maruchou can be a bit chewy, so you’ll want to grill it over a medium flame to cook it longer without burning.

Popular Items to Order When Going to Eat Yakiniku

If you’re not certain what to order from the list above, the two most popular cuts of beef to order in Japan are probably kalbi and rōsu (roast). Kalbi can be a little fatty, but it’s incredibly tender, while roast is prized for being lean and tender. If you want to enjoy more of the rich marbling that Wagyu beef is known for, splurge a little on the “jo-” or “special class” cuts that tend to have more marbling than usual. 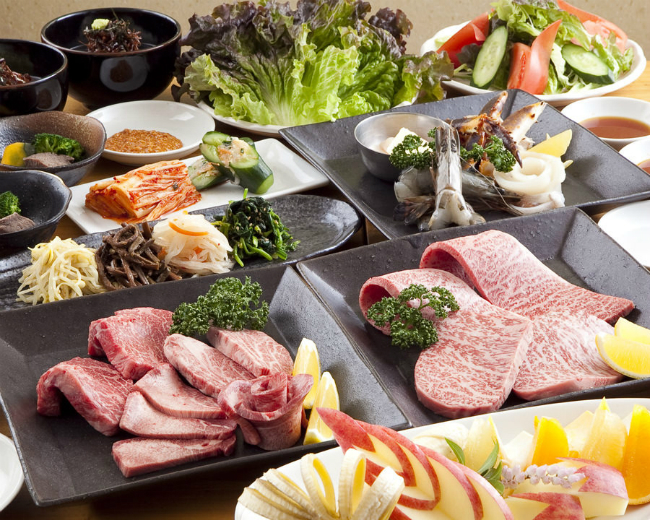 Behind The Scenes of My Yakiniku Adventure

To find inspiration for this article I invited a group to join me at one of my favorite yakiniku restaurants in Tokyo. It turned out that one of my friends had never eaten yakiniku before. Why? He told me he was a vegetarian! While initially a little concerned about what he might find on the menu, Nick (which sounds an awful like the word meat, or niku, in Japanese) buckled down and ordered every vegetable available. This paired with salad, rice, noodles, and kimchi made it an enjoyable experience for everyone, including a non-meat eater. It just goes to show you there really are a lot of places a vegetarian can eat in Tokyo. 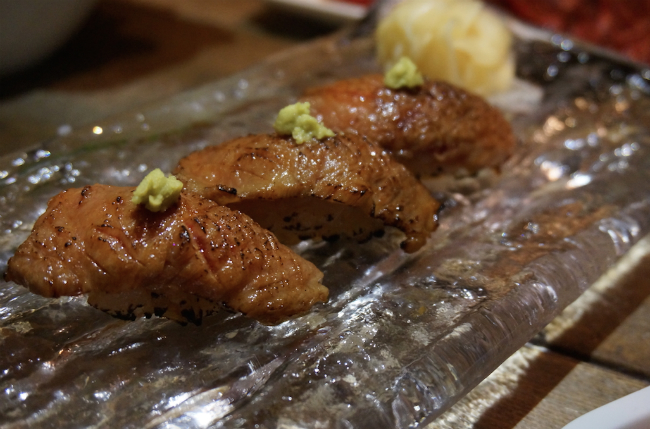