A Guide to Gyoza (Japanese Dumplings)

A Guide to Gyoza (Japanese Dumplings) 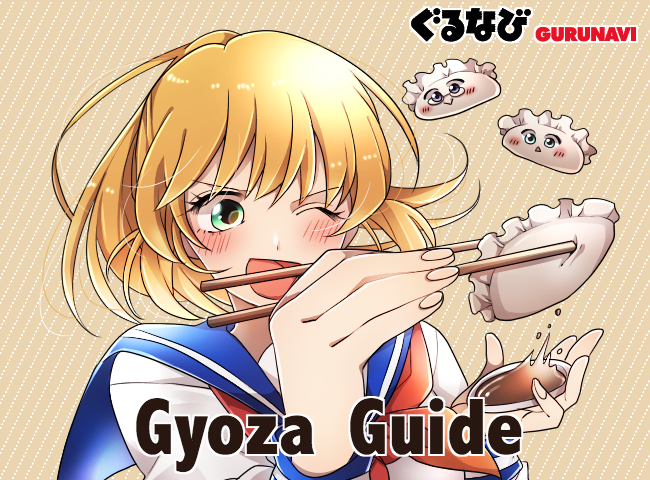 Gyoza are small Japanese dumpling filled with ingredients such as minced pork and vegetables. They can be eaten a number of ways including boiled and steamed, but are typically fried and eaten with a dipping sauce.

While gyoza have been eaten in Japan as far back as the Edo period, they became truly popular following World War II, when Japanese soldiers returned home from Manchuria and brought back with them an appetite for crispy Chinese dumplings and plenty of tasty recipes. Although the appearance of gyoza appearance and cooking methods remain largely unchanged from Chinese dumplings, the flavors have changed over time to suit the Japanese palate.Read on to learn all about these delicious Japanese dumplings.

Japanese Dumplings Vs. Other Dumplings 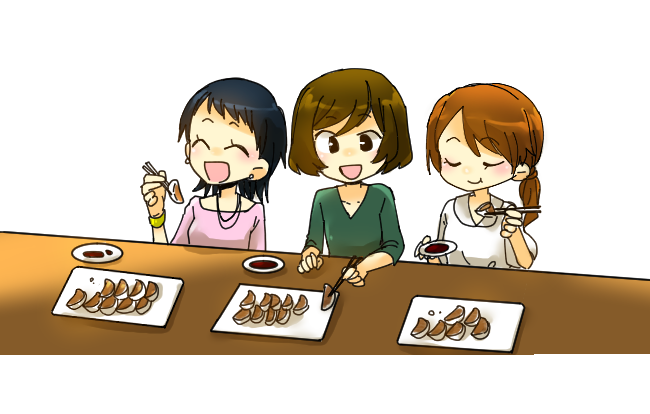 Japanese gyoza are most similar to Chinese potstickers, or jiaozi, as they were originally based on these Chinese dumplings. In fact, the word “gyoza” comes from “jiaozi”. However, there are some differences. Chinese potstickers tend to be doughier and have a thicker wrapper, while gyoza have a very thin wrapper that’s better suited to frying up on Japanese teppan griddles.

Pierogi dumplings, a traditional peasant food from Poland, may look similar in shape to gyoza but taste quite different. Typical fillings include potato, cheese, fruit, and even pickled sauerkraut. The dumplings are boiled and then fried or baked in butter until the exterior becomes golden.

Manti, or mantu, is a style of dumplings from Turkey that originated in the Ottoman empire around the 13th to 15th century. It’s made by rolling out pasta dough and filling it with minced lamb or beef, onions, and spices. They can steamed, boiled, baked, or fried and are topped with a delicious yogurt sauce. Beef and lamb, especially, would be unusual fillings to find in Japanese gyoza as they are primarily filled with beef. However, in some regions such as Hokkaido, where lamb is more widely consumes, it may be popular to find lamb gyoza.

Many people lump Italian ravioli in with pasta, when in fact, it’s a type of dumpling. Ravioli can be filled with anything from meat to cheese, mushrooms, and other vegetables. The wrapper is made with pasta dough, and the final product is usually boiled and served in a tomato or cheese-based sauce. 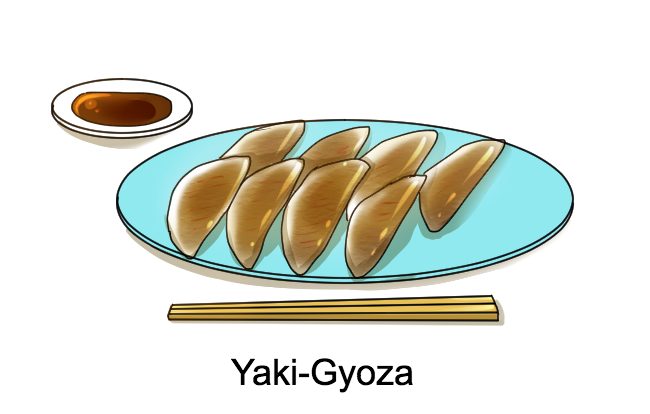 Yaki-gyoza is one of the most popular styles of gyoza in Japan. It’s made with a similar cooking technique to Chinese potstickers, where the gyoza are first pan-fried and then water is added and the pan is covered to allow the gyoza to boil and steam. Finally the lid is removed and the gyoza are allowed to crisp up again, which gives the gyoza wrapper a tender texture with a crunchy finish. Some specialty regional styles of preparing gyoza involve frying up bite-sized dumplings in a skillet and allowing them to stick together as they cook so the individual pieces become one glorious crispy fried batch of gyoza dumplings. 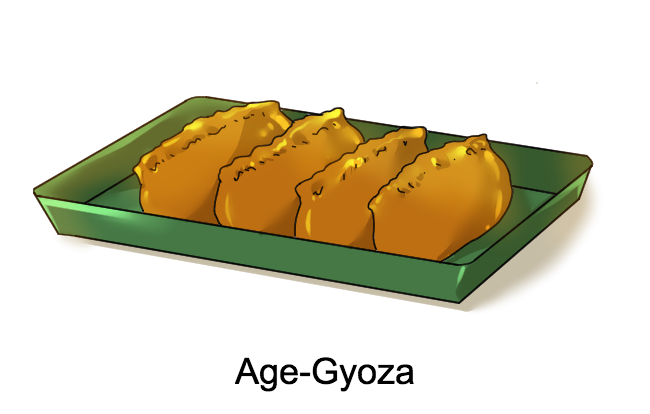 Similar to yaki-gyoza but even crispier is age-gyoza, or deep-fried gyoza. Age-gyoza is served piping hot, so be careful when you take a bite! 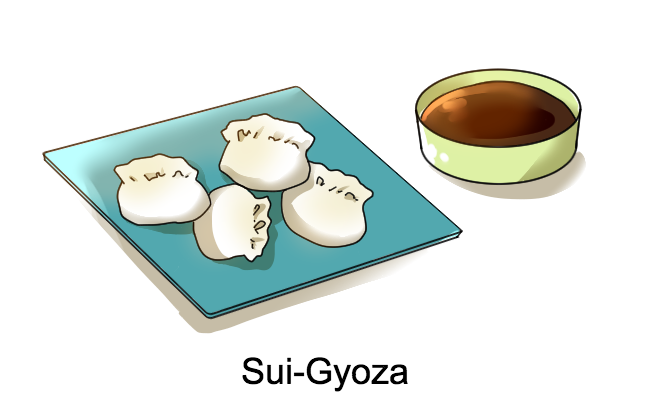 Sui-gyoza is a type of gyoza that’s boiled in water or soup broth, which gives the gyoza wrapper a tender and chewy consistency. Another healthy alternative to fried gyoza is mushi-gyoza, or steamed gyoza. Mushi-gyoza may be prepared and served in a bamboo steamer basket, similar to Chinese dimsum dumplings. 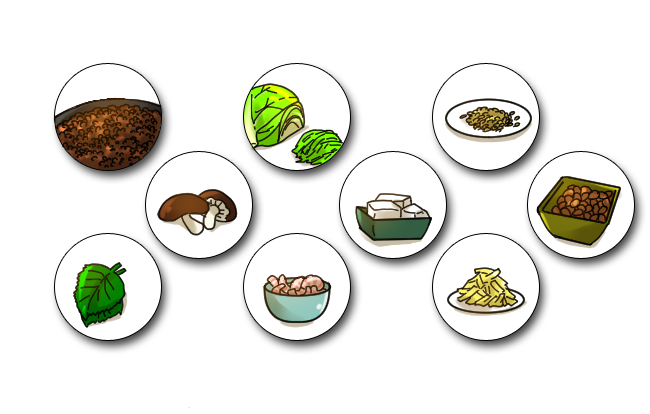 In Japan, the staple filling for traditional gyoza includes a blend of finely minced pork, shredded cabbage, and shiitake mushrooms for a contrast of textures. Some unconventional fillings include minced prawn and other seafood—including decadent options like uni (sea urchin)—as well as cheese, Japanese shiso herb, and even natto (fermented soybeans). Vegans and vegetarians will want to be on the lookout for gyoza filled with crumbled momen (soft) tofu and vegetables. 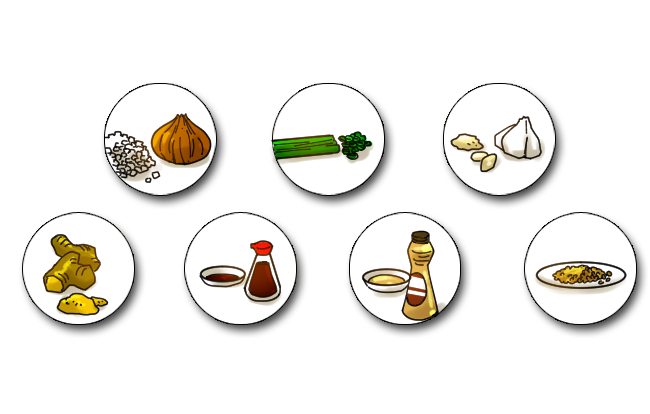 Gyoza fillings can be seasoned with a variety of flavors. Nira (garlic chives) is one of the most popular choices but onion, garlic, ginger, sesame oil, and sesame seeds are also commonly used.

How to Eat Gyoza 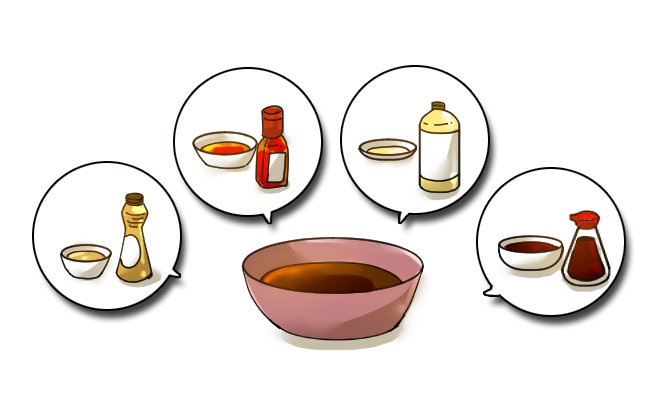 As a dipping sauce, some establishments offer their own house sauce, or they set out the ingredients like soy sauce, vinegar, sesame oil, chili oil, and garlic so you can mix the sauce to your own liking. Sui-gyoza may also be served in a bit of soup or drizzled in ponzu, a citrusy soy dressing.

Where to Eat Gyoza in Japan 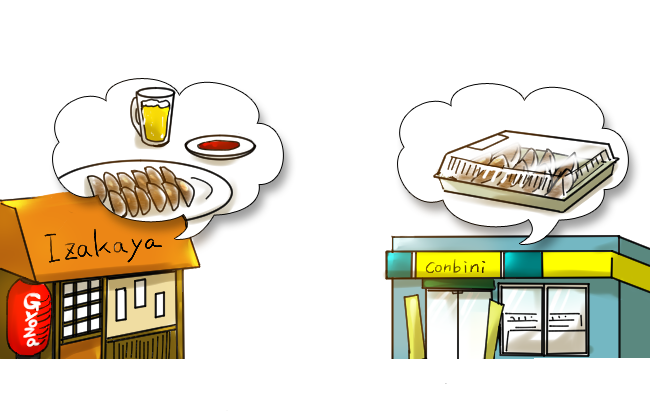 Gyoza can be enjoyed both at home or at a number of dining establishments. For eating gyoza at home, pre-cooked gyoza may be purchased from the deli section of the supermarket or it can be made from scratch. Some people even throw mini “gyoza parties” at home to make gyoza with a variety of fillings and eat them together with friends and family.

For dining out, gyoza is commonly eaten at Chinese restaurants, ramen shops, izakaya, and gyoza specialty stories. “Chuka ryori” (meaning Japanese-style Chinese) restaurants serve Chinese dishes that have become popular in Japan such as fried rice, stir fries, and especially gyoza. Many ramen restaurants, which are also historically based on Chinese cuisine, offer individual sized portions of fried gyoza alongside their ramen. In fact, some ramen restaurants are known even more for their gyoza dumplings than for their ramen.

Many izakaya offer gyoza on their menu as a convenient dish to be shared among a group of people. Gyoza specialty shops serve up Japanese dumplings in both group and individual serving sizes, and it’s common to eat gyoza as part of a set with a bowl of rice.

Try Different Varieties of Gyoza in Japan to Find Your Favorite Dumpling!

While visiting Japan, there’s a wide variety of food options and dining experiences to try, but you should definitely make room for some gyoza. Browse Gurunavi’s listings for the best places to try gyoza, wherever you go in Japan: Itadakimasu!