* The price is in Japanese Yen (JPY) 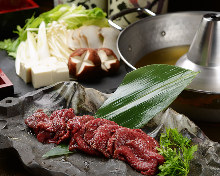 Inside of horseback called "fillet" thinly-sliced and assorted, served with soy sauce. 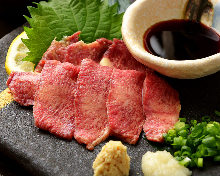 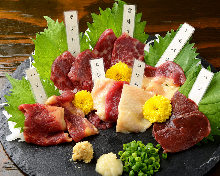 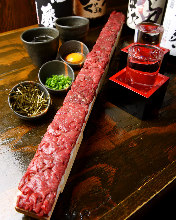 Above sushi rice in a box, fresh horse meat is thinly cut and added with various condiments and seasonings, then served with egg yolk on top. 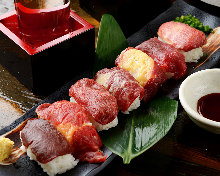 Soybeans which are harvested when they are not yet ripe, and boiled in salt water.

Platter of various kinds of pickles.

A dish of sliced cool tomatoes.

A dish of pork belly and cabbage mixed in egg dough and grilled.

A Chinese dessert prepared by adding sugar and gelatin into powdered apricot seeds or almond powder, then chilled to harden.