Whether having tried it in a Styrofoam cup or savored it in a swanky Japanese restaurant, by now most people are at least familiar with ramen. What began as a B-rank Japanese dish has soared into worldwide popularity, even gaining coveted Unesco World Heritage status. But how did ramen get to where it is today? What exactly makes it so special? Read on to find out!

Japanese Ramen Revealed: From the Simple to the Sublime

At the height of the ramen boom in Edo Era Japan, ramen was considered a simple food which could be purchased cheaply and had a similar taste no matter where you ate it. In modern Japan, however, there are thousands of Ramen shops, each with hundreds of lip-smacking variations.

In its most basic form, traditional ramen always consists of soup and noodles. In most cases, noodle shape and thickness vary depending on the type of ramen, location or shop, and multiple toppings are added; but it’s the soup base itself that really gives each type its own unique kick. Shio Ramen, or salt base, is the simplest type you can eat. Otherwise, the most well-known types are Shoyu Ramen, which has a soy sauce base, Miso Ramen, which originally came from Hokkaido, as well as Tonkotsu (Pork Bone) Ramen from Kyushu. Let’s take a closer look at these four varieties, each considered authentic in their own right. 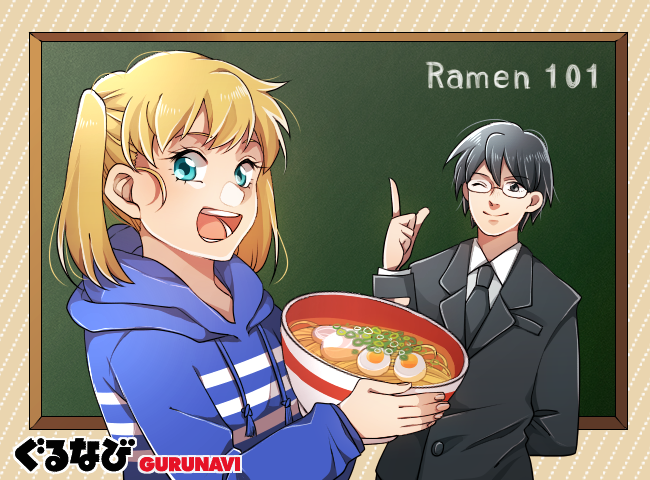 In terms of its ingredients, shio ramen is the oldest and most fundamental type. It consists of an amber-tinted soup base made from salt, chicken, fish, vegetables and sea weed. This ramen’s selling point is that, because the base is not boiled very long, the soup stays clear; this allows you to savor the natural, individual tastes of each ingredient. Not surprisingly, shio ramen has the lightest taste of all four ramen variations. It is usually eaten with chashu and narutomaki toppings (you can read more about popular toppings below).

If you walk into a Japanese ramen shop and order without requesting a specific sauce or base, you will usually find shoyu ramen sitting in front of you. “Shoyu” basically means soy sauce in Japanese. The soup consists of a vegetable and chicken foundation with a liberal injection of soy sauce. The soup is clear brown and has a light, herbal taste. Despite its salty touch, the abundance of soy sauce gives it a tang lacking in its shio-based cousin.

The famous Japanese soybean paste called miso is ubiquitous throughout Japanese cuisine. As a soup base, miso has creamy texture, its taste resembling a combination of cheese and nuts. Due to its unique flavor, miso ramen is one of the most well-loved versions of ramen around the world.

Tonkotsu ramen is boiled for many hours, making it much thicker than either the shio or shoyu base. Tonkotsu, which means “pig bone,” is made by boiling pork meat and bones together, thus creating a thick and hearty broth with a meaty flavor. The soup has a milky consistency much like miso, so don’t get confused about which one you want to order!

Tip: If nothing else about this article sticks, just remember this: Thicker, more colorful broth usually has more calories than clear varieties and the clearer the broth, the higher the sodium content.

While the essence of authentic Japanese ramen may lay in the broth, toppings are crucial in making ramen the king of all Japanese noodles. Here are the most popular Ramen toppings in Japan.

Nori, also known as seaweed, is often cut into crunchy strips and placed alongside the ramen bowl. As eating nori may be quite daunting for ramen novices, it may be wise to dip it into the soup first; that way, you can get used to the texture and consistency while still tasting mostly broth. Once you have accomplished that, it may be easier to take the plunge and try it dry.

These are sliced pieces of pork meat seasoned with soy sauce. As shown in the classic Japanese movie Tampopo, because chashu slices enhance the flavor of the ramen as they simmer gently in the broth, you should eat them at the end of the meal—if it’s even possible to wait that long, of course!

The type of boiled egg used varies depending on the kind of ramen. For example, tonkotsu ramen will usually be served with a hard-boiled egg, whereas Miso Ramen is almost always served with a soft-boiled egg. While you can just eat the noodles, the egg provides a rich accent that is part of a truly authentic Japanese ramen experience.

Kamaboko, sometimes also called Narutomaki, is a small slice of formed fish paste with a pink whirlwind symbol on it. If you think that the name “Narutomaki” sounds familiar, then you’re probably an anime fan! Naruto, the world famous anime character, was indeed named after it—his favorite dish is miso ramen.

When freshly sprinkled on top of ramen, scallions give off an invigorating natural aroma that compliments the deep richness of the soup base.

Menma are basically aromatic bamboo shoots. As they have a very intense taste, they might pose a challenge for people eating ramen for the first time. Don’t worry, though—like with any topping, you can request not to have menma when ordering.

Beans sprouts are also freshly served on top of ramen. When dipped into the soup they absorb the flavor of the ramen and have the added bonus of bulking up the overall amount of food you get to eat, making your Japanese ramen experience—along with the taste—last that much longer.

Although not essential, corn adds a full, robust flavor when soaked into any ramen broth and is typically served with tonkotsu broth.

Adding butter to the ramen might be one of the most delicious sins ever committed, because it makes ramen soup even creamier. With just a touch of butter, ramen becomes a delectable stew.

Japanese Ramen Noodles with a Twist

One of these is called tsukemen. Rather than eating the noodles with the soup, in this dish they are served separately and must be dipped and then slurped. The soup is especially thick and strong in taste. Typical flavors of tsukemen soup are pork or chicken flavor, yuzu (Japanese Mandarin), curry and spicy chili. After finishing the noodles, water is added to the soup so that it can be savored to the last drop.

While this list of ramen is by no means exhaustive, we hope that you’re now equipped with enough information to begin your own quest to find authentic Japanese ramen—one from which you may never return (with an empty stomach at least)!