Hanami Party Guide: How to Enjoy a Picnic among the Sakura

Hanami Party Guide: How to Enjoy a Perfect Picnic among Sakura 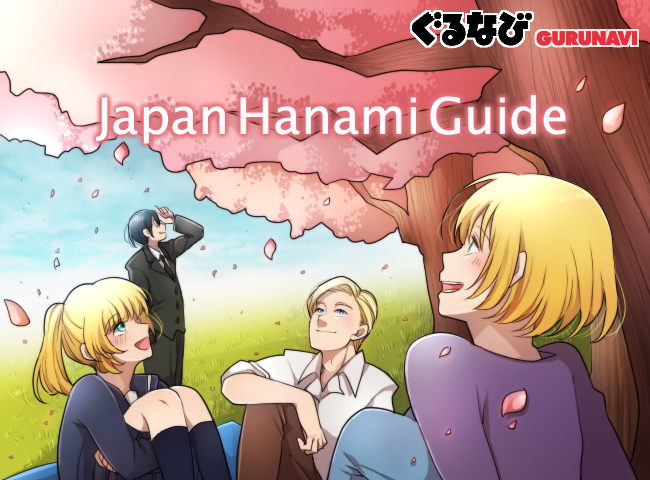 Each spring, people throughout Japan flock to city parks with food, drinks, and picnicware in tow looking for a peaceful spot to enjoy the flowering cherry blossom trees. Known as hanami, or cherry blossom viewing, this spring picnic under a canopy of pink and white petals is a fun way to celebrate the season with friends, family and even coworkers. Japan has honed cherry blossom viewing down to an art, and by following this guide, you too can throw the perfect hanami party.

At a hanami party, you’ll find a variety of Japanese cuisine that can easily be shared with everyone from savory eats to sweet treats. Be sure to pack these essential picnic foods for your sakura viewing.

Bento are Japanese packed lunch boxes, which can be prepared at home or bought before the picnic. Those eaten at hanami parties are called hanami bento, and feature items like makizushi (sushi rolls), inarizushi (sushi rice stuffed in fried tofu pouches), tamagoyaki (Japanese-style omelet), or kamaboko (pink and white fish cakes).

Meat dishes that can be easily shared and eaten with chopsticks are also popular for picnics in Japan. These include kara-age (boneless, bite-sized Japanese fried chicken), takoyaki (grilled octopus balls), and ebi-fry (breaded fried shrimp).

Onigiri (rice balls) are another favorite for hanami picnics, as they are easy to transport and come in a variety of flavors, like ume (pickled plum), salmon, and tuna mayonnaise. During hanami season, you can even find sakura onigiri made with salted cherry blossoms, which add a delicate floral taste to the rice.

While most hanami food is meant to be served at room temperature, you may want to bring some miso soup along as the weather may still be cool, especially in the evening. Hot miso soup can be stored in a thermos and poured into cups for everyone to drink.

For dessert, sakura mochi is a type of wagashi (traditional Japanese sweet), enjoyed during hanami season. It’s a rice cake filled with red bean paste and wrapped in a salted cherry blossom leaf, providing a tart contrast to the delicate sweetness of the rice. Hanami dango are another type of wagashi eaten during hanami, which are sweet dumplings made from rice flour. Three dumplings in green, white, and pink are served together on a bamboo skewer. These three colors are a common theme for Japanese spring sweets.

Strawberries are the seasonal spring fruit in Japan, making them also a popular hanami dessert. They can be eaten plain or with sweetened condensed milk drizzled over them. Other fruits like oranges and kiwi fruit are also popular in Japan. It’s a good idea to wash, peel, and cut these fruits into bite-sized pieces before digging in.

Sake is the traditional hanami drink, and Japanese people affectionately refer to sake drinking under the cherry blossom trees as hanami-zake. Beer is also very popular, with many breweries releasing seasonal beer can designs decorated with cherry blossoms.

Hanami drinks aren’t limited to alcoholic beverages?cold and hot tea are both popular as well as buying your favorite soft drink from the endless number of nearby vending machines and convenience stores. A variety of sakura-flavored drinks are also available for a limited time during hanami.

Setting Up Your Hanami Party

There are a few essentials you’ll need to throw the perfect hanami party. The first is a large picnic mat for everyone to sit on like a woven straw mat or a large plastic tarp, called a “leisure sheet” in Japan. These can easily be found at 100-yen stores and variety shops, like Daiso and Don Quijote. Though not required, some groups also bring short folding tables to hanami, although a makeshift table can be fashioned out of upside-down cardboard boxes or plastic crates.

And of course, you can’t forget plates, cups, and chopsticks. Disposable serving ware is available from convenience stores and supermarkets, but the environmentally conscious may want to pack non-disposable options. Once the sun goes down, it’s a good idea bring along some blankets or warm clothes as the sakura are often illuminated with hanging lanterns well into the evening.

Before throwing a hanami party, it’s essential to first check that the park allows picnicking. This can be confirmed on the park’s website or on signs at the park itself. It’s also important to keep in mind that some parks may not allow drinking, so check before you go if possible.

Public parks, especially the popular ones, fill up fast during the hanami season, so many people arrive early in the morning to reserve a space by laying down a leisure sheet. It’s a good idea for at least one person from your party to remain with the mat after reserving your spot until the rest of your party arrives.

Take Your Shoes Off

The same shoes-off rules apply to picnic mats as houses in Japan?they are considered clean areas, so you must remove your shoes before stepping onto a picnic mat. Leave your shoes on the grass by the edge of the mat facing outwards, so you can easily step into them again when you need to get up.

Pick up your Trash

After your picnic, it’s extremely important to take all your trash with you so that other people can enjoy hanami in a clean park. Most parks will provide bins, however, if there are no garbage bins at your picnic site, you must take all your trash with you and dispose of it appropriately at home or in other public bins (which can be difficult to find). Garbage in Japan needs to be sorted according to burnables (such as paper goods and food waste), non-burnables like plastic, and recyclables like glass bottles, aluminum cans, and PET bottles, so keep this in mind when tidying up after your picnic.

Remember that hanami is for cherry blossom viewing?not picking. Breaking off twigs can prevent blossoms from growing again in the future, as this exposes the tree to potential pests and diseases. Please do not climb the trees as well, as they are very fragile. The best option is to take photos to commemorate the beautiful blossoms instead.

Where to Dine When a Picnic Space Can’t Be Found

Just about everyone in Japan loves to enjoy at least one hanami picnic each year, which is sometimes a problem as parks can become quite crowded. If you don’t feel like competing for a picnic space or simply want to leave the mats, thermoses, and food at home, there is an alternative: After you’ve finished your hanami walk, simply head to one of many great restaurants in the area for a springtime meal to cap off your sakura memories.