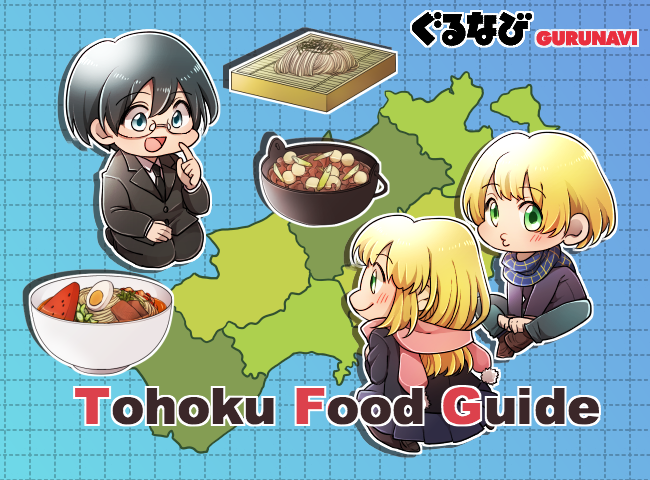 If dramatic mountain ranges, bubbling hot springs, lakes in ancient craters, stews cooked on open fire, bowls of steaming noodles, barbecued meat, hot pots filled with grilled rice dumplings, and all-you-can-eat soba sound like your kind of thing, then you should put Tohoku on your travel itinerary! Honshu’s remote and lush northern area, home to six prefectures, is also the birthplace of all sorts of specialty dishes—here are 6 tasty Tohoku dishes that should definitely be on your menu as you trek into adventure.

Iwate prefecture's famous wanko soba challenges any idea of polite and graceful Japanese dining—you’ll have to wear a bib to catch the mess you make! At a wanko soba restaurant, you will be served a small bowl of noodles (wanko means “bowl” in the local dialect)—about the size of just one mouthful—it takes about 15 bowls to equal one regular serving of soba. Your empty bowls are stacked up next to you, and once you finish each round, the staff will refill it with a loud cheer. Obviously, the goal is to slurp down as many bowls of noodles as possible. It’s said the average number of bowls eaten is 50 for women and 60 for men, which means a lot of cheering! You can find wanko soba restaurants across Iwate, served with an assortment of pickles, tuna sashimi, crushed walnuts, mushrooms, wasabi and salmon roe. 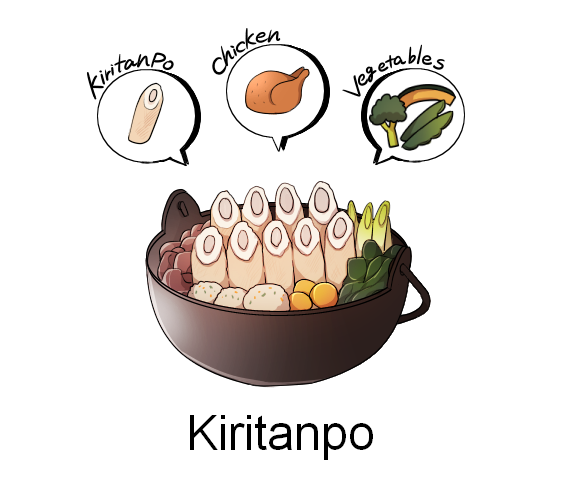 Japan is no stranger to skewered food—yakitori, kushikatsu, dango and charcoal-grilled squid are just a few examples. Akita prefecture’s kiritanpo is another one to add to this list. Kiritanpo are skewers of freshly cooked rice that have been pounded, formed into cylinders, wrapped around cedar skewers and then toasted over an open fire. You can eat the skewers as is with a sweet miso sauce, or cut up and cooked in a stew of vegetables and chicken. Kiritanpo started out as a portable meal for woodcutters and hunters working in the mountains, but you don’t have to be an outdoorsy person to enjoy it! Peak season for kiritanpo eating is during mid-September to March, and restaurants serving kiritanpo hotpots can be found throughout Akita prefecture. 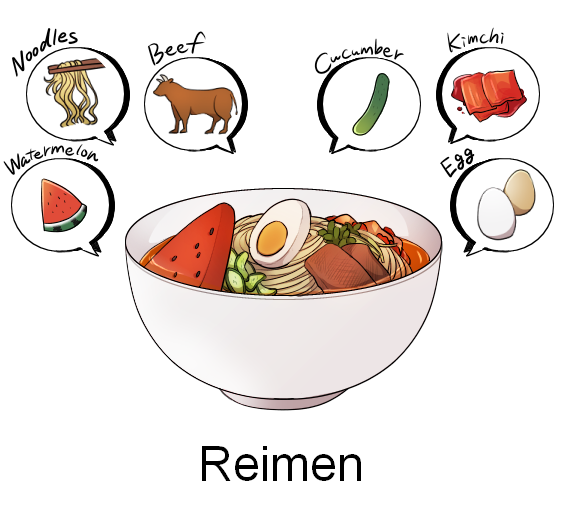 This unique noodle dish, first served by a Korean yakiniku restaurant owner in the early 1950s, has been adapted over the years to suit Japanese tastes. If you order a bowl of reimen, you can expect to be feasting on a delicious mound of potato starch noodles in a cold stock, topped with slices of beef, cucumber, kimchi, boiled egg and a piece of fruit like watermelon, pear or apple—to keep you cool with the heat of the kimchi. Reimen can be found at most yakiniku restaurants in Iwate’s capital, Morioka, all year round. If you’re concerned by the heat levels, ask for betsukara, which means the kimchi that is normally added to the soup is served separately so that you can adjust the spiciness yourself.

Gyu means “beef,” and tan comes from the English word “tongue.” Together they are gyutan, pieces of sizzling ox tongue that have been grilled over a charcoal fire. Said to have first been served in 1948 by Keishiro Sano, a Yakitori restaurant owner in Sendai who was inspired by a French chef, gyutan is loved for its rich, meaty flavor, tender texture and juiciness, and has become so popular since its birth in Miyagi prefecture that it’s now served throughout Japan. This tasty tongue is usually eaten with oxtail soup, barley rice, grated yams, and vegetable pickles. 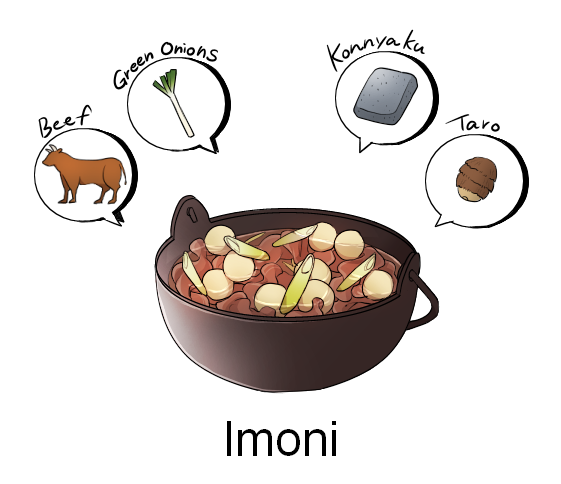 During summer and early autumn, the banks of the Mamigasaki river in Yamagata are filled with ‘imoni-kai’ gatherings—get-togethers between families, friends and colleagues for socializing and cooking up a big batch of Imoni. Imoni is a thick taro-potato stew featuring the taro root native to the Tohoku region, beef slices, konnyaku, green onion, sake and sugar, with a stock that differs from region to region and may be a soy or miso base. It’s a popular outdoor food and often cooked over a fire pit, but can also be found in restaurants in the Yamagata prefecture. The first Sunday of September is the annual Imoni Festival, where a 6-meter wide pot of stew is prepared, using 3 tons of taro and serving around 30,000 guests!

When you eat Akita prefecture’s inaniwa udon, you’re eating award-winning noodles—they were chosen as one of Japan’s 100 Best Local Dishes of Rural Areas by the Ministry of Agriculture, Forestry and Fisheries in 2007. What makes them so good is their smooth, delicate taste, lip-smacking texture and glossy appearance. Even though this dish has been around since the beginning of the Edo period, until 1860 it was exclusively an Imperial food. This was not only because the ingredients were of such high quality, but also because it took so much time—actually up to four days—to make it! Inaniwa udon is commonly eaten in a clear broth topped with shiso leaves and pickles, or piled on a bamboo mat accompanied with different dipping sauces such as soy sauce, miso and sesame.

Although the Tohoku area is not on the common tourist route, just around four hours on the bullet train from Tokyo will bring adventurous souls into contact with it’s wonderful natural scenery—not to mention all sorts of delicious specialty foods! Other famous dishes of the area include Aomori prefecture’s Miso Milk Curry Udon, served with a wedge of butter, the disk-shaped emban gyoza from Fukushima, natto soup, sanjin ryori (“mountain man food” that is as hearty and delicious as it sounds), and black-haired beef. So whether you spend your days in Tohoku skiing, visiting temples, climbing mountains, or bathing in hot springs, you can rest assured you’ll be eating well—just remember to wash it all down with some the region’s famous ginjo-shu sake!