Kushikatsu is a deep-fried dish made with meat, fish, and vegetables as well as other ingredients placed on a thin bamboo skewer and deepened in batter. It is often called “kushiage” in eastern Japan, especially in the Kanto region, and it is usually made with pork and onion. On the other hand, the name “kushikatsu” is famous in the Kansai region – especially in Osaka, where there are many restaurants specialized in this dish. The ingredients cut into small pieces are placed one by one on a skewer and everything is deepened into batter and fried, making a large number of ingredients a peculiarity of this dish. Kushikatsu restaurants usually have rules regarding the way of eating their dishes. Recipients with oyster sauce are placed on tables in the restaurant, and customers are supposed to share them, and eat their skewers after putting sauce on each of them. 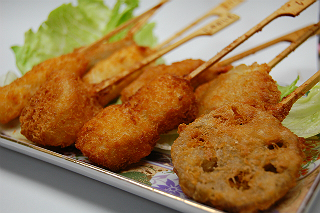