Welcome to the second installment of this series! And thank you for following Fukuchan on Twitter! He has gained fame inside the company as well.

We hope Fukuchan's popularity will keep on growing.

Fukuchan has a secret plan

The day of the challenge has come. In the morning, the first thing Fukuchan tells us is "Today, I have a secret weapon." 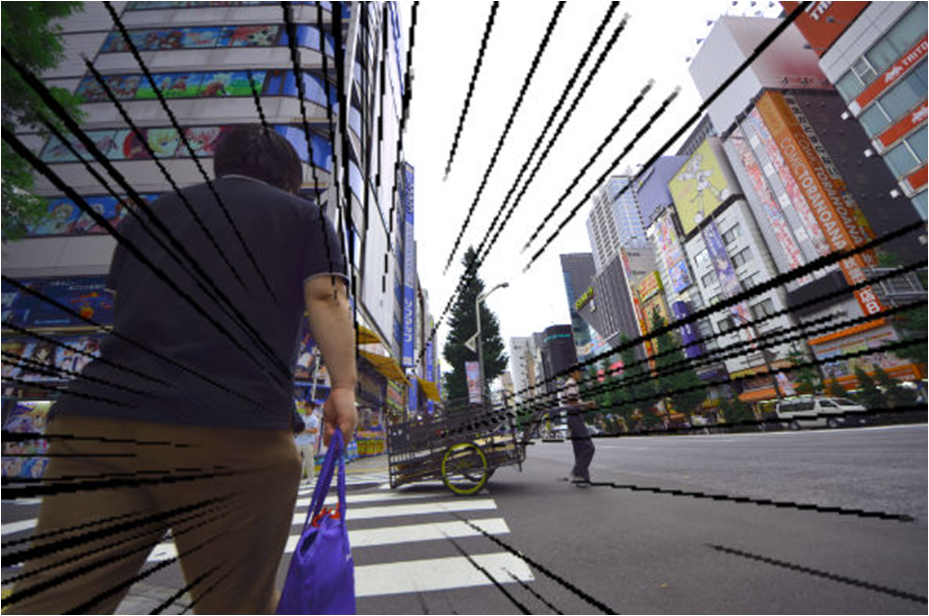 His sudden statement gets us all worked up. We press him to tell us more about it.

He grabs a blue bag (it looks like a 2006 soccer world cup limited edition), and proudly produces an empty Tupperware box.

Err, Fukuchan? Are you planning on giving-up before even starting?! No need to say we get a bit worried.

As said above, Fukuchan got a bit popular inside the company. As if his fighting aura was perceptible, colleagues passing by Fukuchan stop and say,

"Hey Fukuchan, are you going now?"

"Ganbatte!! We're looking forward to your next food fight!"

It looks like he has many supporters within the company. Showing great confidence, Fukuchan waves with assurance to them. He is now ready to head to the next mega-mori challenge.

Searching for the restaurant

Today's restaurant is located in the holy land of Otakus: Akihabara. Not only is Akiharaba the place to go for electrical appliances, figurines and videogames, but there are also many places to eat mega-mori food. 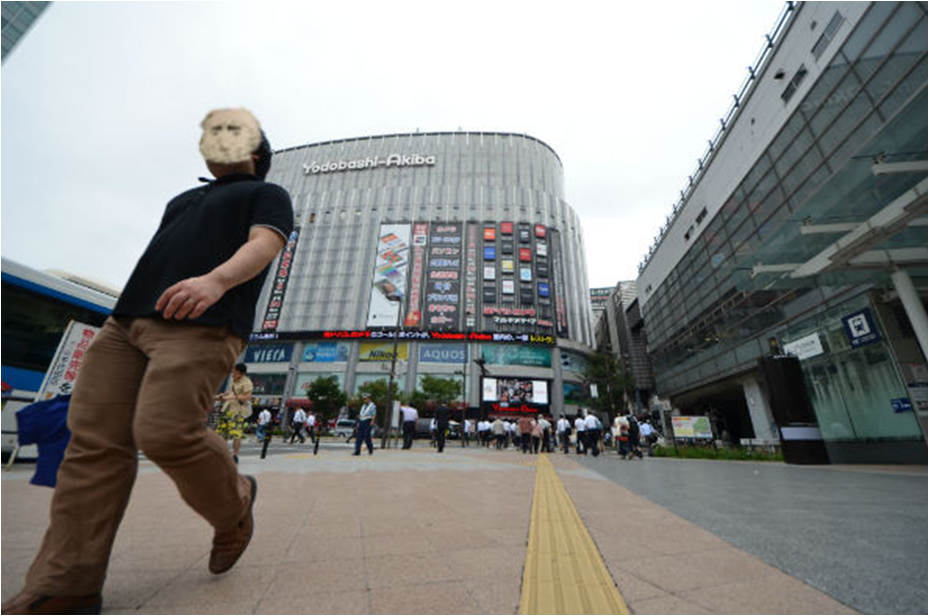 Today's restaurant is called Pancho, which is well-known for its pasta Napolitana, but it has recently grown in popularity because of its mega-mori size pasta. 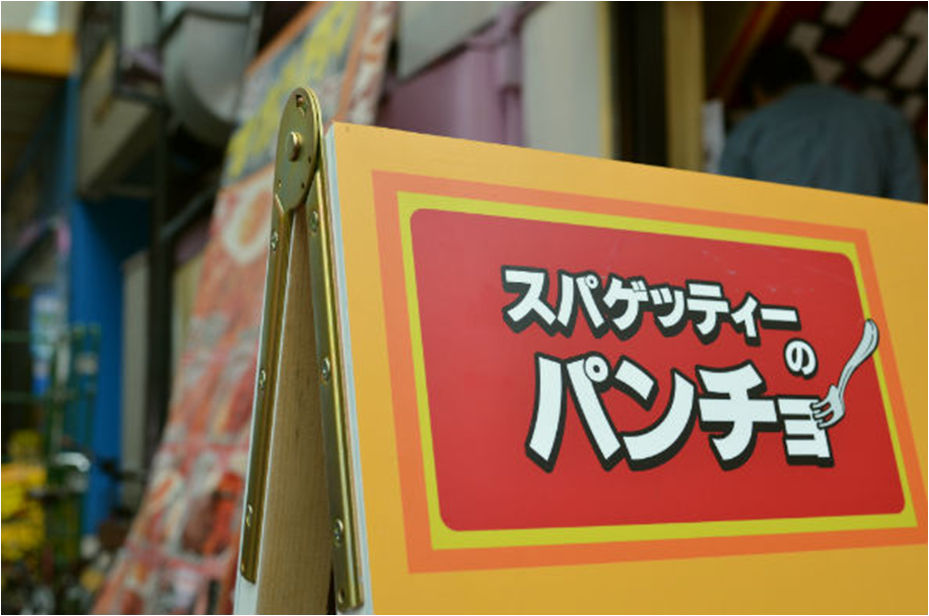 Naturally, Fukuchan is going for the seijin size. 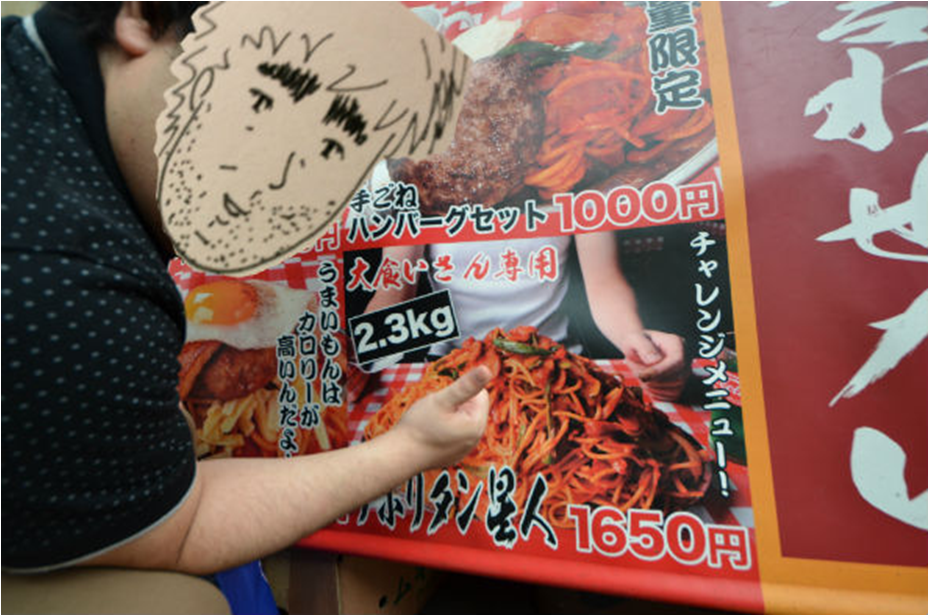 The mega-mori seems to be beyond imagination! All fired up, Fukuchan presses the order button.

We enter the restaurant and find a table. Customers incessantly go in and out. Pancho looks like a successful restaurant. Fukuchan is having the classic meat sauce pasta.

He ordered a true mega-mori size this time, so he looks a bit anxious.

Suddently, there is a commotion in the restaurant: Fukuchan's seijin size pasta is being brought to our table. Here it comes.

In the eyes of the customers gazing at our table, we find a mixture of reverence and disdain.

The seijin size pasta wouldn't attract any attention on a buffet table at a party, but in from of only one man, we kind of understand the reaction of the people around us. 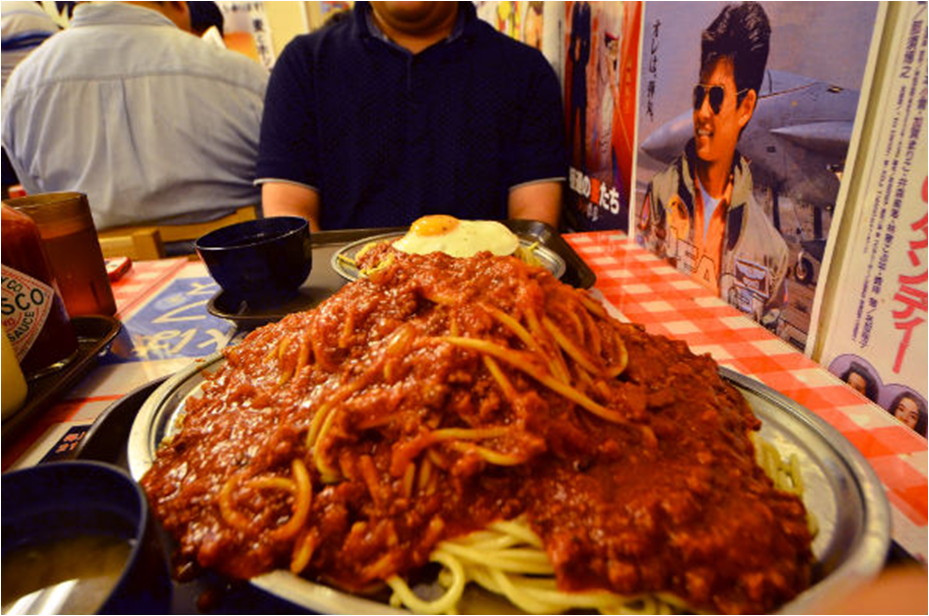 Fukuchan stares at the pasta with big eyes. "This looks like... an erupting vulcano!!" he exults. 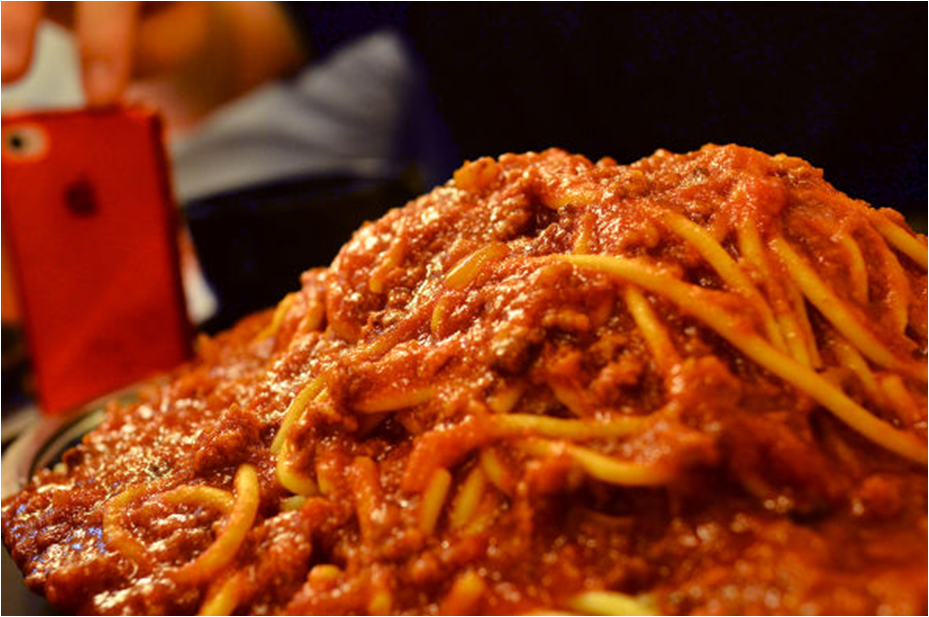 The meat sauce covers the mountain of pasta like hot magma.

second round of mega-mori fight is about to start.

First, Fukuchan elegantly takes the tabasco bottle into his hands. Is he trying to increase his appetite by adding spice to the pasta? That's probably a trick he learned throughout his countless food fights. There is no blind spot in his strategy. 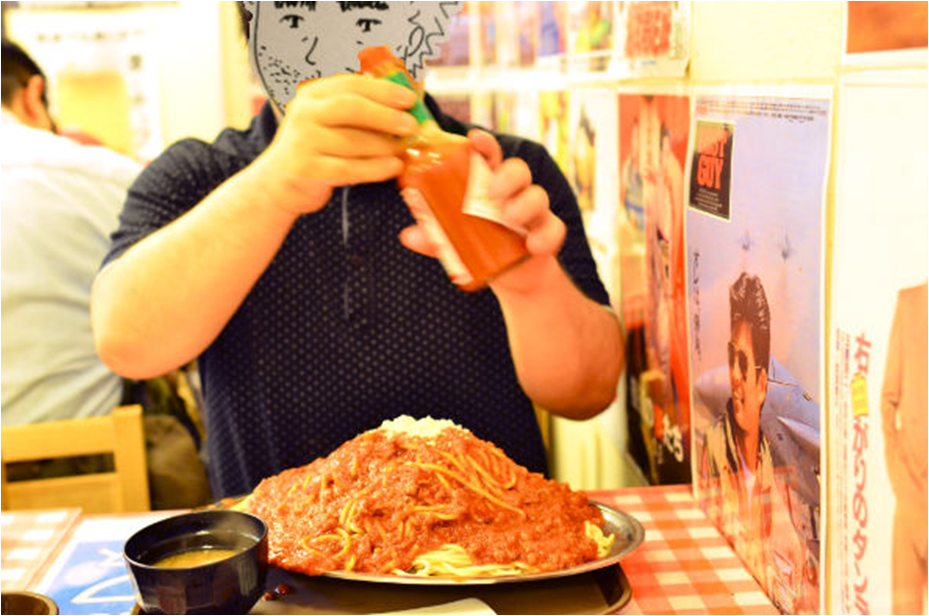 After pouring a generous amount of tabasco, he digs in.


"Delicous sauce!!" he says with his mouth full of pasta. 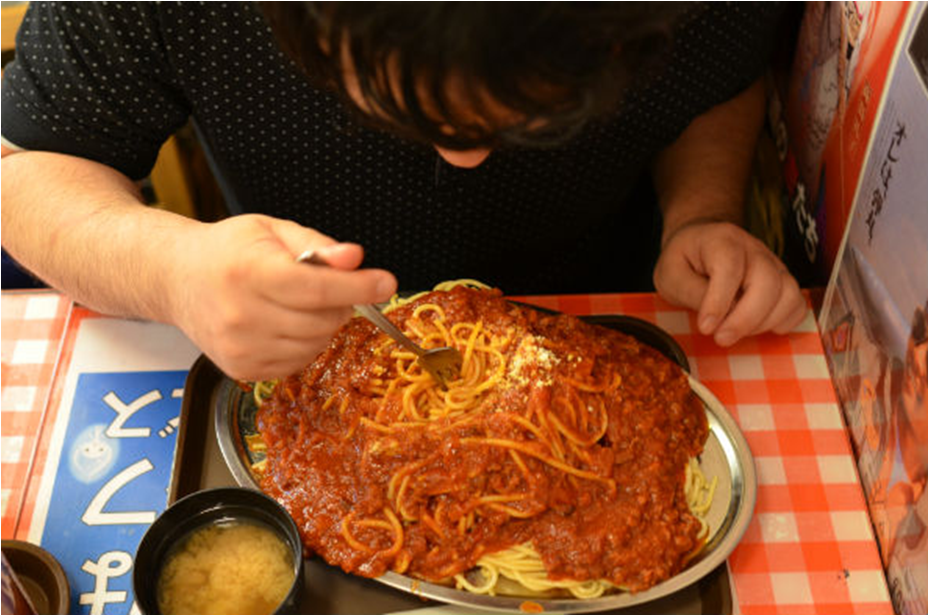 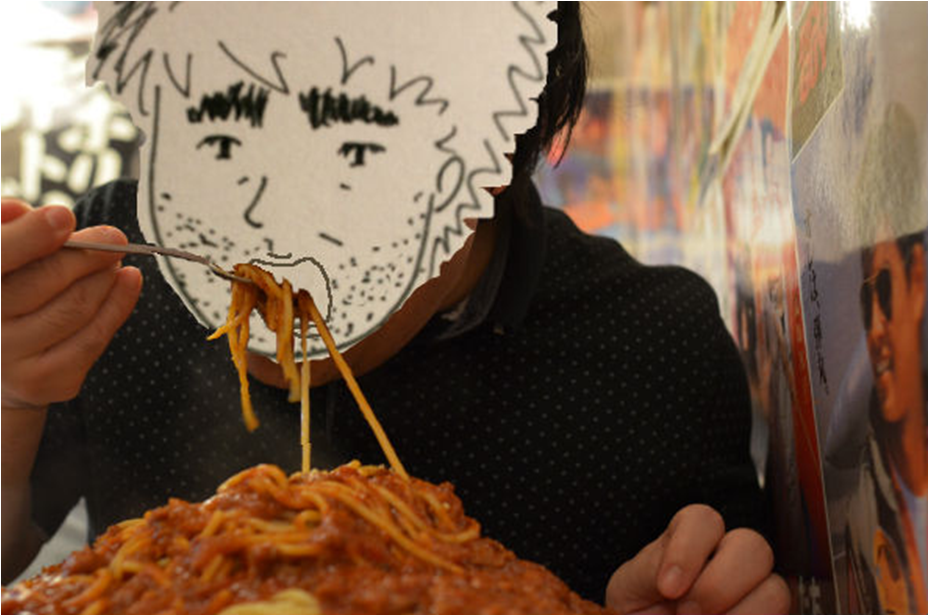 The seijin size pasta is overwhelming, but Fukuchan's pace is constant. His fork doesn't stop bringing more pasta to his mouth, despite the sweat starting to drip on his forehead. 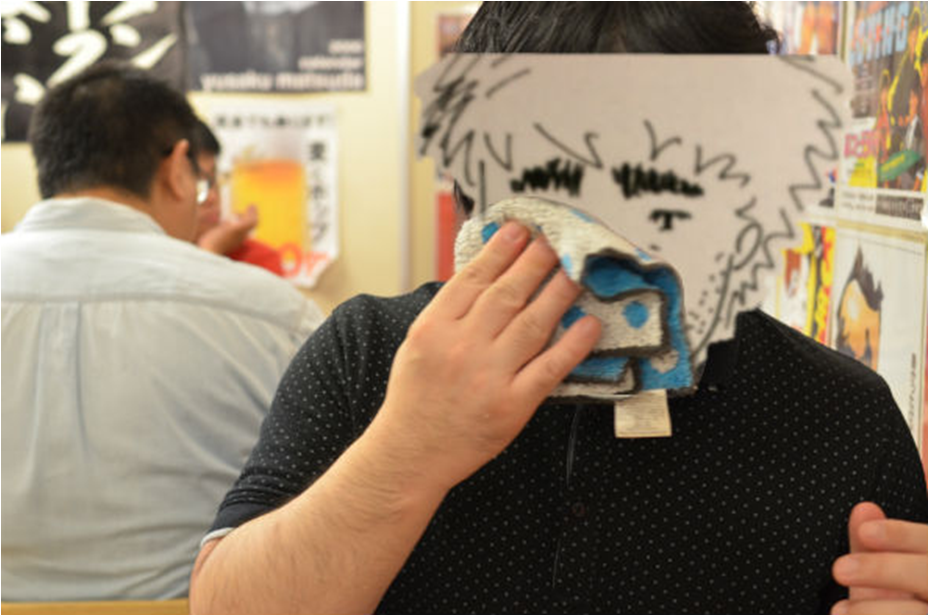 We see the results of Fukuchan's incessant attacks: the mountain is starting to crumble. 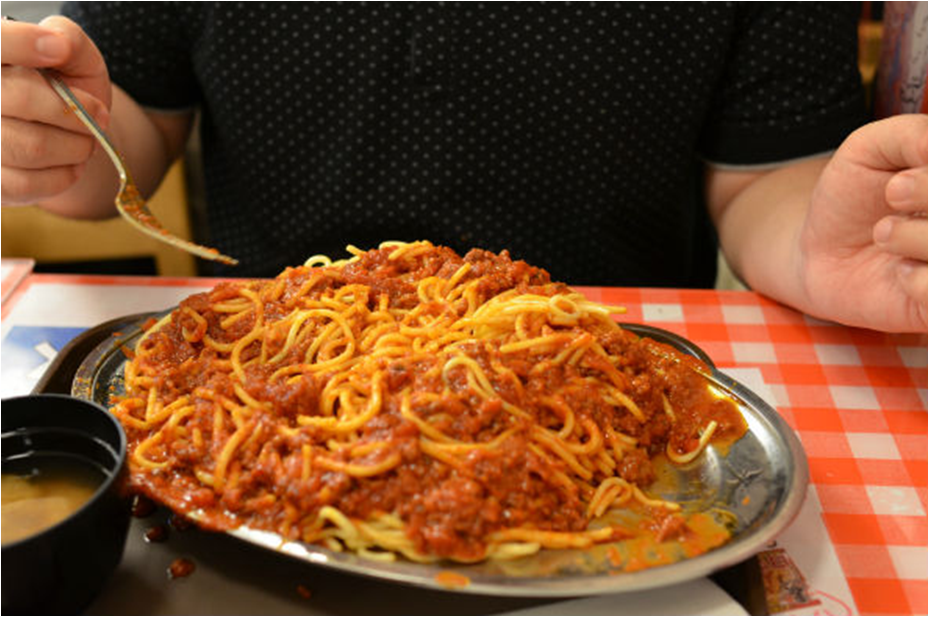 It looks like since he lost to the mega-mori fried rice at Goku, Fukuchan has improved a lot. Even more that what we expetected.

Sadly, Fukuchan's been nicknamed "Fried Rice" since the fiasco at Goku, but if he can win this fight, he will be able to pretend to the title of "Food Fighter". 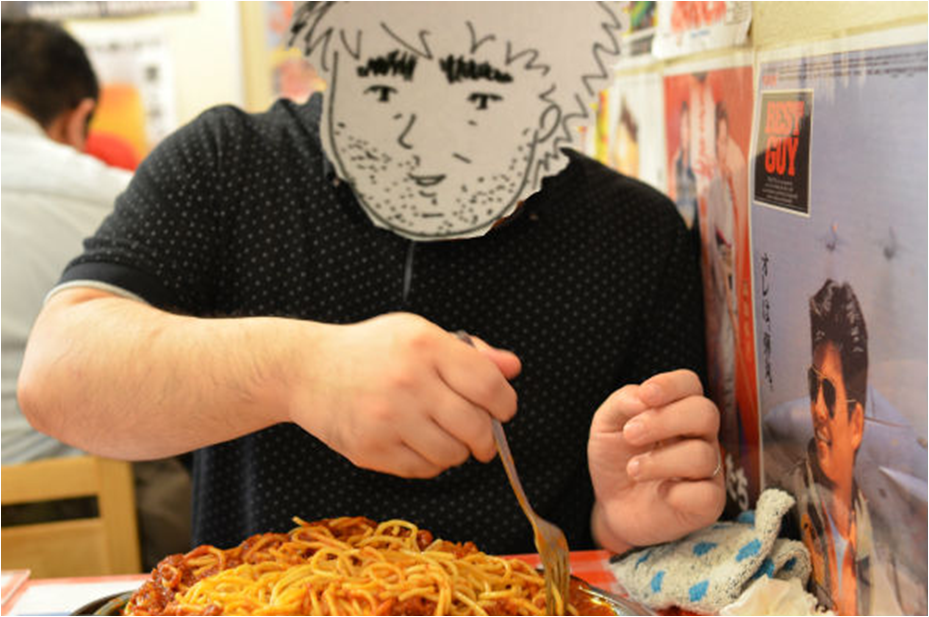 While we are having such thoughts, Fukuchan keeps on eating. The bottom of the plate becomes visible.


Victory is at hand! 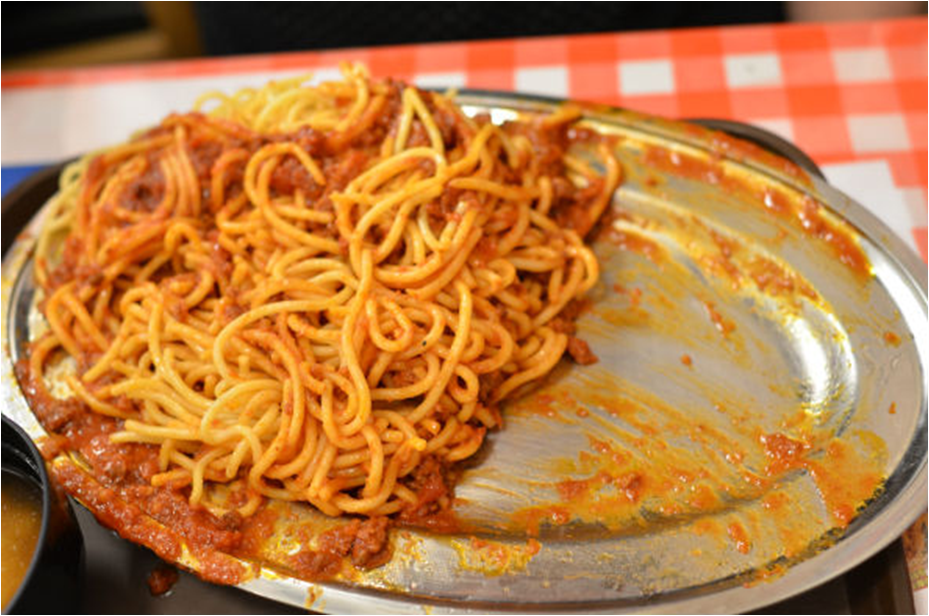 The finish line is only a few mouthfuls away, but then! Fukuchan reaches for water. Don't drink water! It's the worst thing to do! 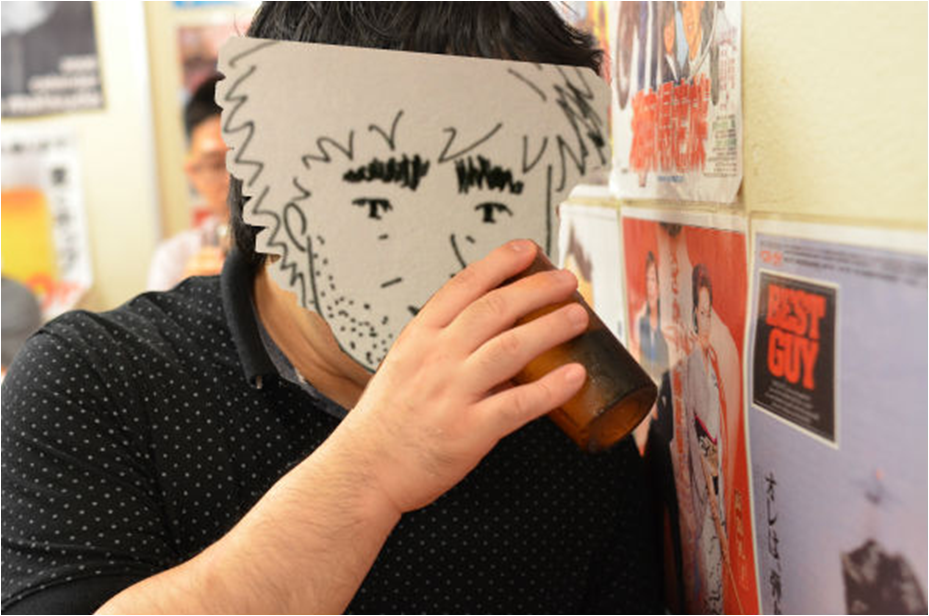 This is so unexpected that we have no idea how to react. What's happening?! The sweat shines even brighter on his forehead. 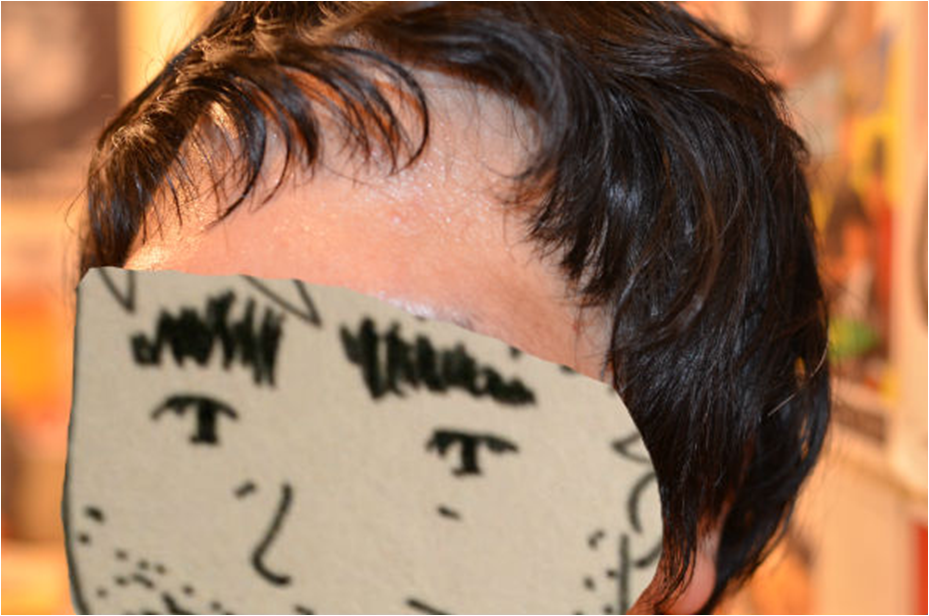 Fukuchan adds parmesan and more tobasco to the remaining pasta. Oh, so he will keep on eating! He was just teasing us! 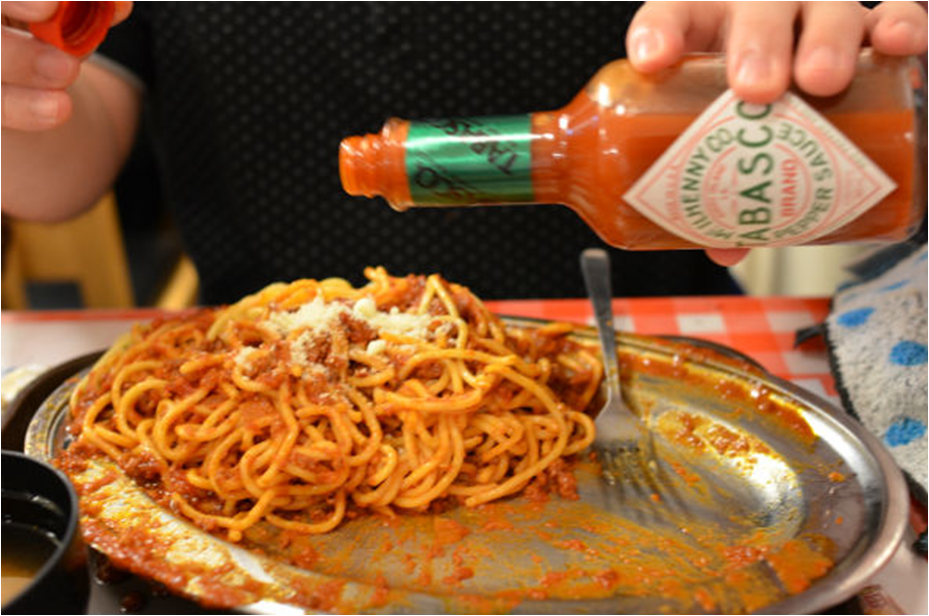 Looks like the fight is not finished yet. What a cheeky guy, putting on such a show! 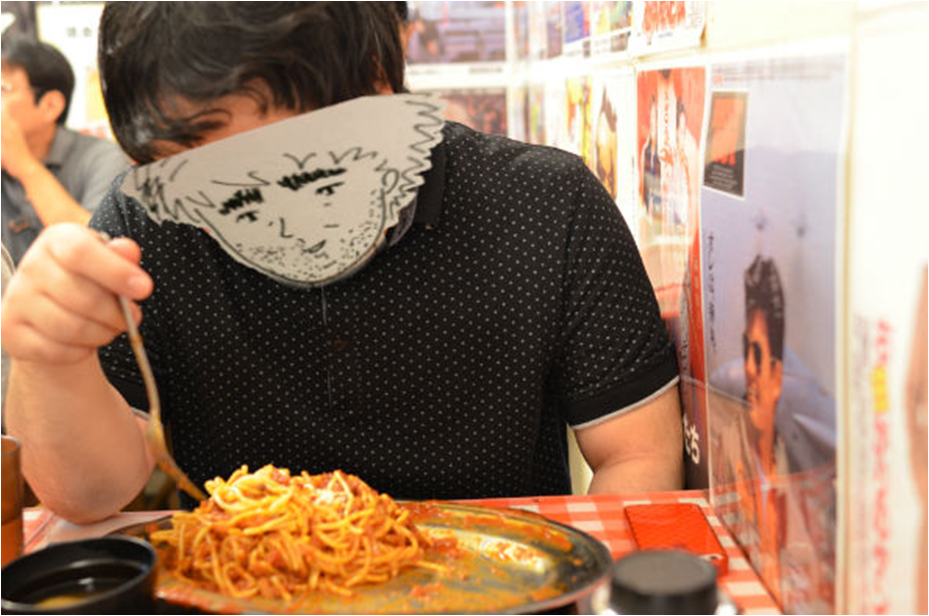 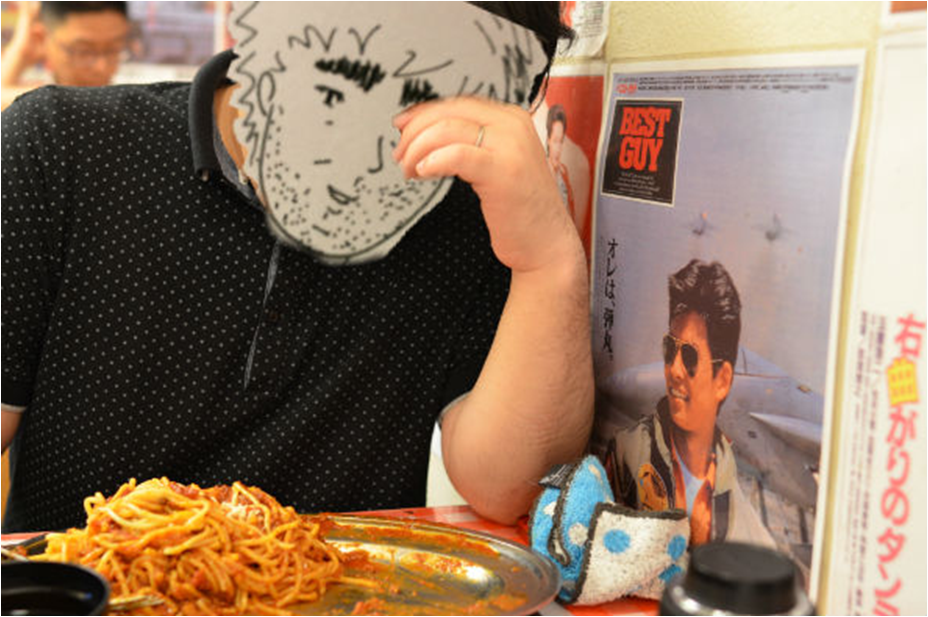 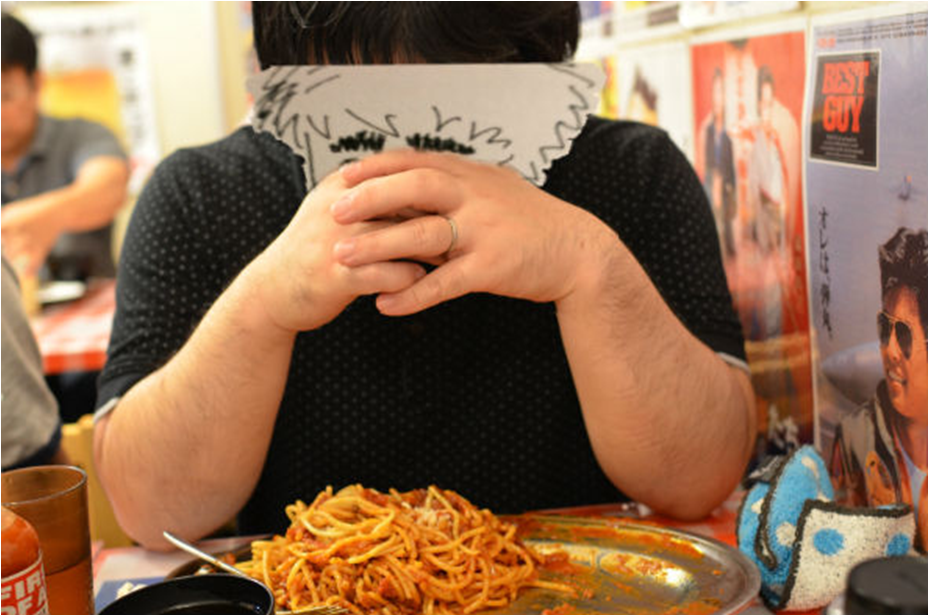 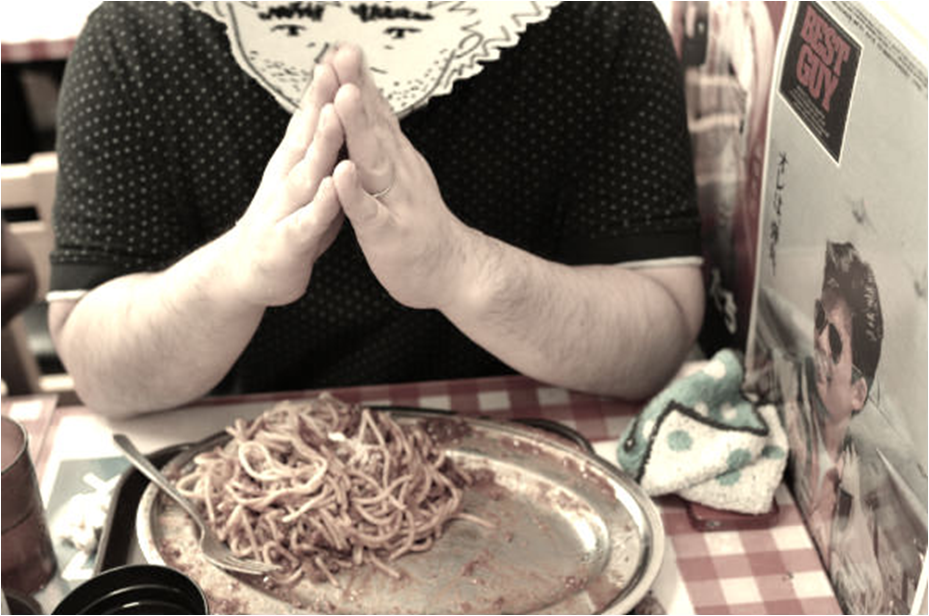 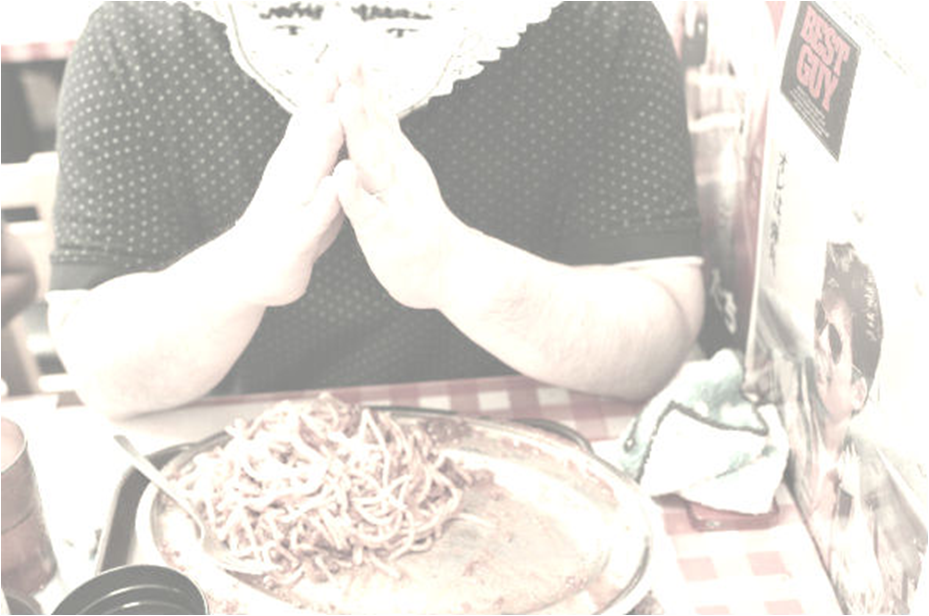 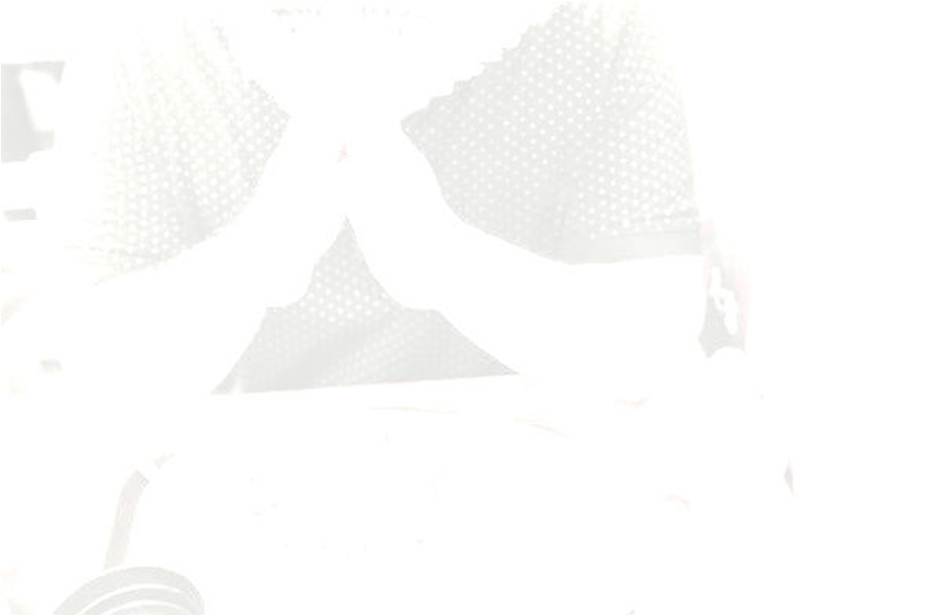 Victory was so close! But it slipped through Fukuchan's fork at the end.Well, it looks like his nickname is going to remain "Fried rice" for some more time...

On the way back, Fukuchan walks sadly. It is getting dark outside, and inside his heart as well. 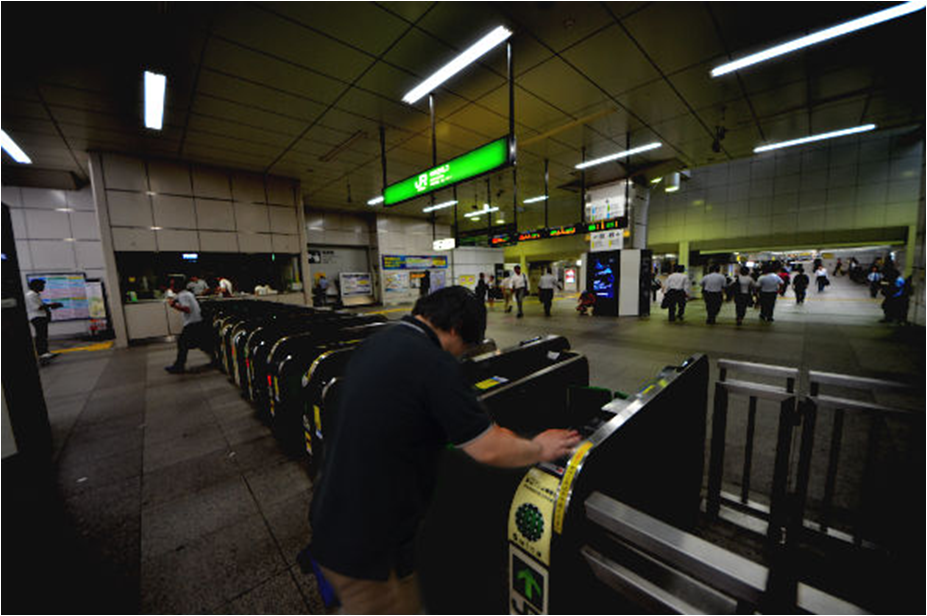 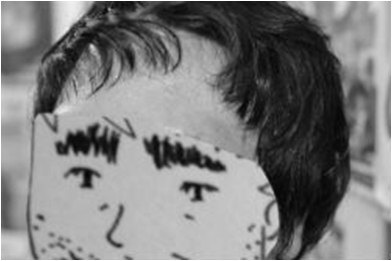 Later that day, Fukuchan looked like he was struggling with the pasta inside him.

Can he accomplish his next challenge? Please look forward to the next episode!