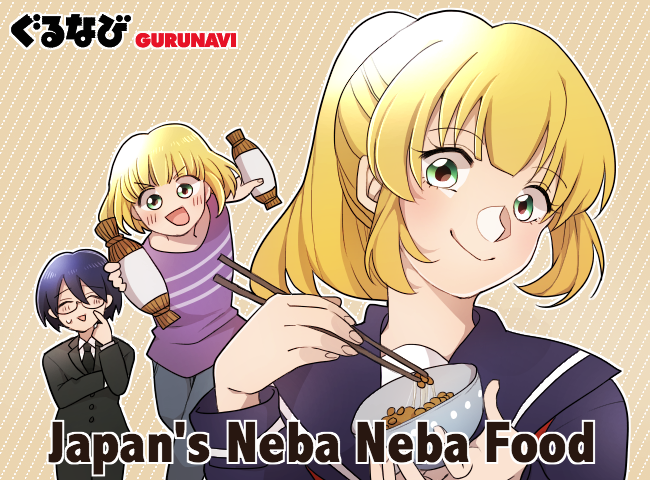 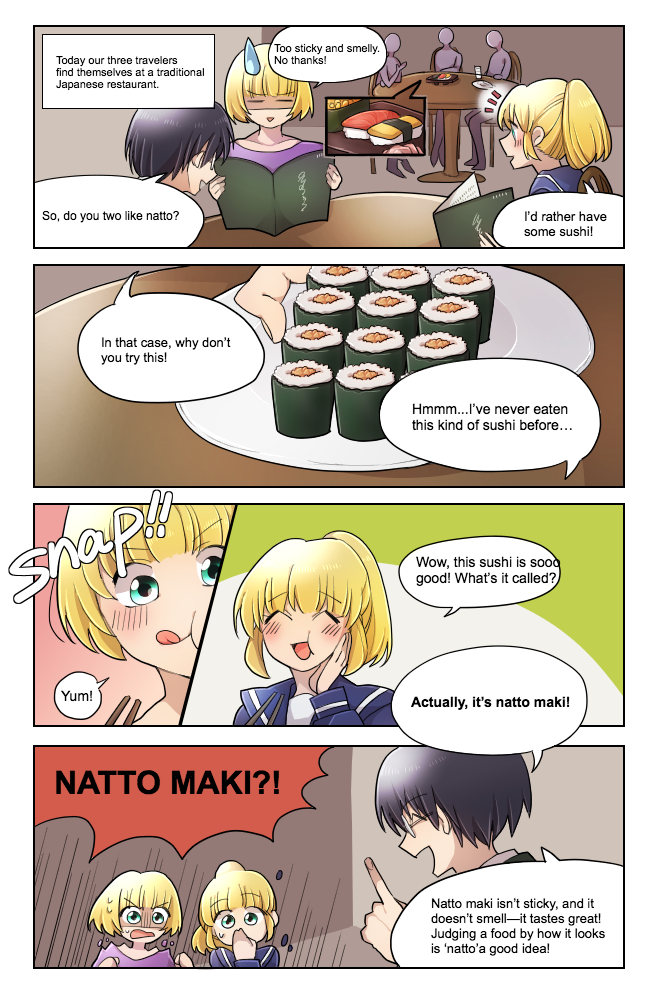 Japanese food is known around the world for its many delicious and attractive-looking dishes, from elegant sushi to delicate wagashi (traditional Japanese sweets). But did you know that slimy, sticky, gooey-looking foods are also a part of Japanese cuisine? These dishes, known as “neba neba” foods in Japan, may not be particularly beautiful to look at, but they make up an essential part of the Japanese diet because of their delicious taste and healthful properties.

In Japanese, the word “neba neba” is an onomatopoeic word meaning “sticky” or “slimy”, and is used to describe foods with such a texture. Some neba neba foods like natto and yama-imo have been enjoyed in Japan for centuries, while others such as okra were introduced in modern times.

Neba neba foods are a highly popular comfort food and are lauded for their many health benefits. In addition to being low calorie, neba neba foods are high in soluble fiber (the main cause of their sliminess) and are gentle on the digestive system. In addition, they’re rich in vitamins, minerals, and other nutrients.

Start Your Slimy Food Journey in Japan with Natto, Tororo and These Other Neba Neba Ingredients 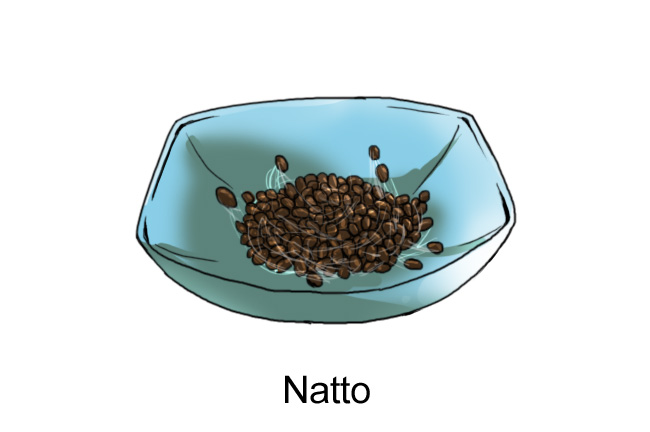 Natto the name for fermented soybeans in Japan. It’s commonly mixed with yellow mustard (karashi) and tare (a sweet soy sauce), and eaten over hot white rice. It’s one of the most polarizing neba neba foods—to the point where even some Japanese people don’t care for it—due to its strong odor. Fans of natto swear by it, however, and it is one of the most healthy neba neba foods, containing an enzyme called “nattokinase”, which improves blood circulation and promotes heart health. You can try mixing natto with a variety ingredients like kimchi, wasabi, soy sauce, or even avocado, to make it a bit more appetizing if the taste or smell put you off. 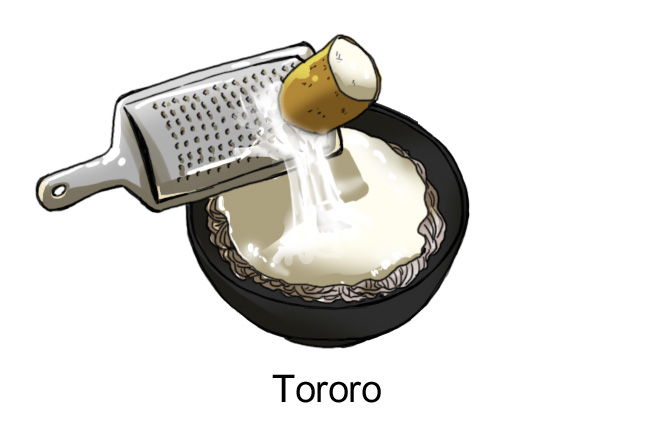 Tororo is a dish of grated Japanese yam, either naga-imo or yama-imo yam, that transforms into a sort of slime when grated. Although this may not sound so appetizing, it’s actually quite delicious when eaten over hot rice with a little soy sauce. Japanese yams are rich in protein, vitamins, and minerals and are sometimes referred to as the “medicine of the mountains”. In addition to rice, tororo can also be eaten over udon noodles, soba noodles, or over raw sliced tuna in a dish called yamakake. 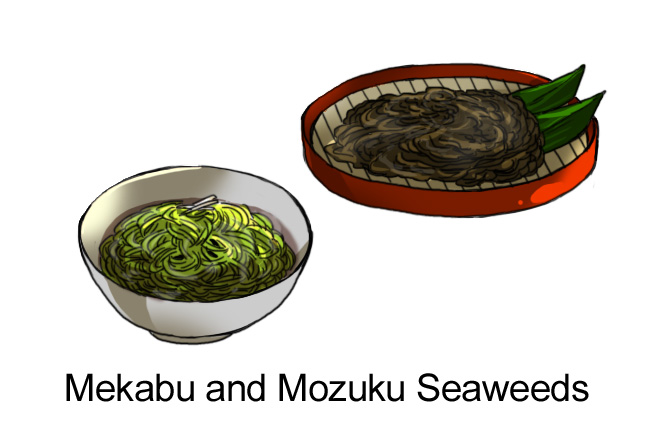 Mekabu and mozuku are types of seaweed with a slimy texture that are commonly eaten in Japan. Mekabu—the flowering part of the wakame seaweed—has a slightly sweet flavor and is very high in both iron and calcium. Mozuku is a type of seaweed that grows in Okinawa and provides essential vitamins and minerals. It has a stringy, noodle-like appearance and a mild flavor that goes well with vinegar. 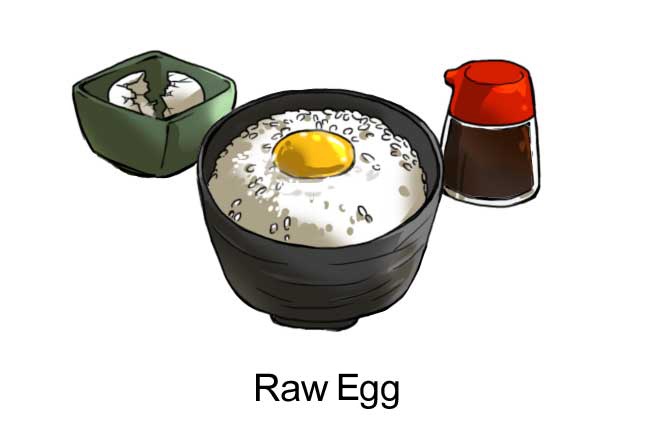 Although raw egg may be seen as a food safety risk in some countries, it’s commonly eaten in Japan, and there are stringent requirements surrounding egg production. Consuming raw egg provides numerous health benefits, as they are easy to digest and provide a boost to the immune system. These benefits are lost by cooking the egg, as the process alters many of the healthy proteins and fats. Raw egg is added to a number of dishes, such as Tamago Kake Gohan—a popular breakfast dish—where a beaten egg is poured over a bowl of plain cooked white rice, with soy sauce added to taste. A beaten raw egg is also used for a luxurious dipping sauce for well-marbled beef during a meal of sukiyaki. If you’re interested in trying raw egg, check to make sure that raw egg is safe to consume in your country. 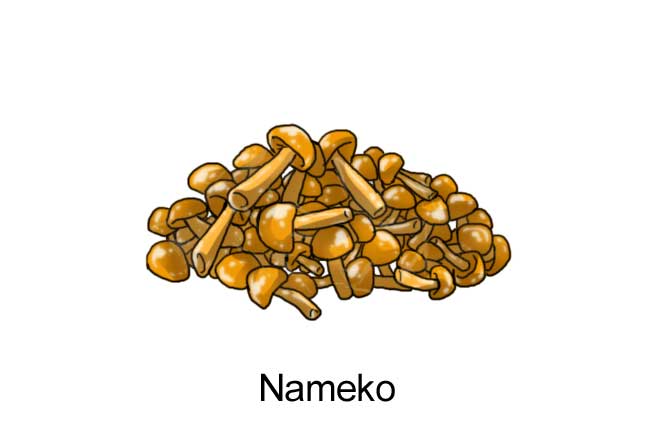 Nameko mushrooms are somewhat uncommon in other countries, but are an everyday variety of mushroom found in Japan. The name “nameko” refers to the stickiness of the gelatinous coating found on the mushroom cap, which is packed with vitamins and minerals, and is highly beneficial to the digestive system. Nameko mushrooms have a nutty flavor and are used in a variety of Japanese dishes, from miso soup to stir-fries. 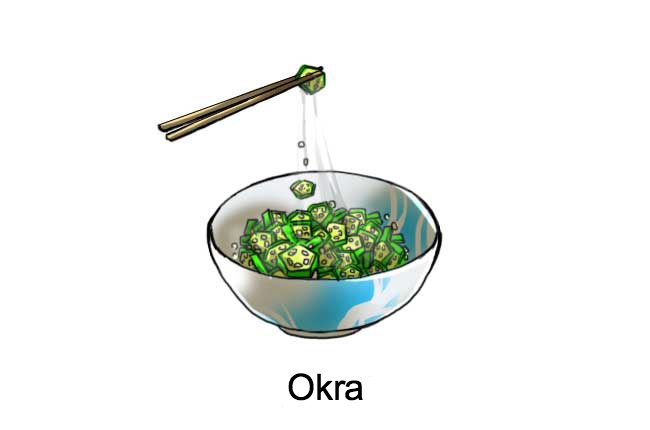 Okra first arrived in Japan via the United States during the Meiji period, when Japan opened up to foreign trade in the late 19th century. Due to okra’s sticky, slimy texture, this foreign vegetable was quickly embraced as a neba neba food and has become a staple ingredient in Japanese cooking. It’s a good source of vitamins, fiber, and folic acid. Enjoy okra sliced up in a salad or boiled with other vegetables. 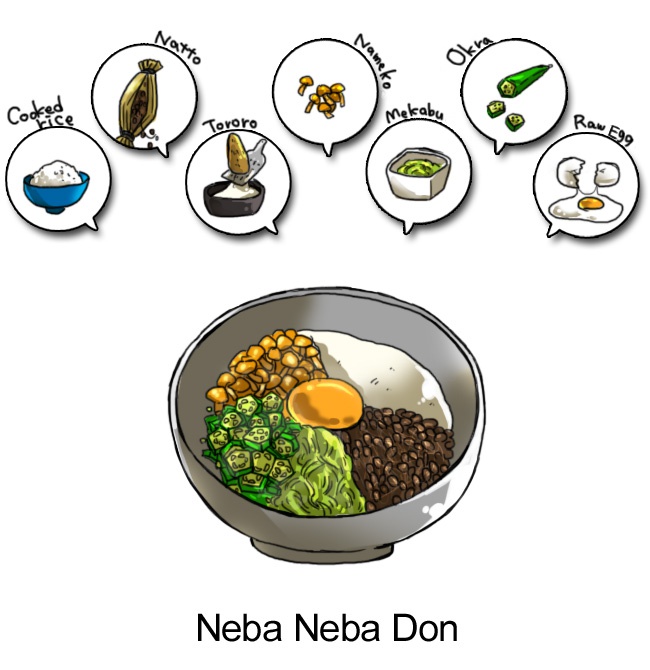 Any of the above neba neba foods can be mixed together and piled on a bowl of rice to make Neba Neba Don or on top of soba noodles to make Neba Neba Soba. These are popular summertime dishes in Japan, as neba neba foods are believed in Japan to be helpful at preventing natsu-bate (summer heat exhaustion) because of their nutrient profile. Drizzle on some soy sauce and mix well with chopsticks until all of the ingredients combine. For an extra treat, you can garnish it the dishes with ikura caviar.

For an Authentic Insight into Everyday Japanese Cuisine,Try Natto, Tororo, Mekabu, and Other Neba Neba Foods.

Although some neba neba foods are more of an acquired taste, they can be surprisingly delicious as well as extremely good for you, so why not give them a try? It’s recommended to start with more “entry-level” dishes like okra and tororo, and work your way up to rich raw egg or pungent natto. Itadakimasu!