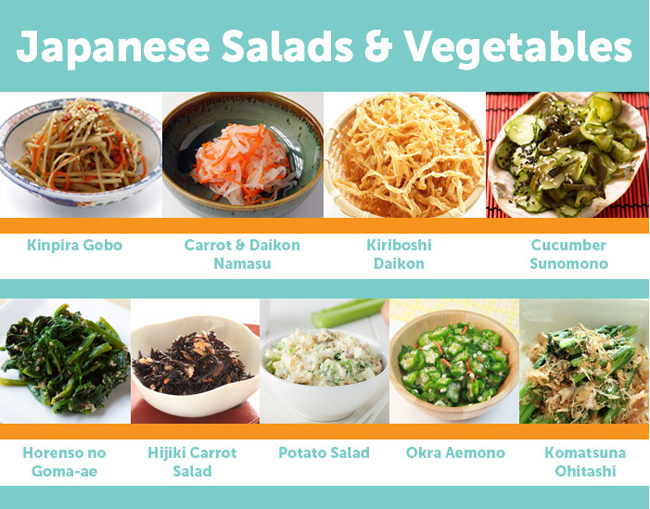 Japanese cuisine is regarded as one of the healthiest in the world, and meals comprise a large proportion of salads and vegetable-based dishes. For many centuries, eating meat was forbidden in Japan due to its Buddhist tradition, and shojin ryori, the traditional vegetarian meals served in Buddhist temples, significantly influenced the cuisine of the time. This influence is still evident modern Japanese food, with vegetables playing a big part of both everyday home cooking and dining out.

At the heart of Japanese cooking is the principle of “shun”, using ingredients when they’re in season and therefore at the peak of their freshness and flavor. Japan’s varied climate with its four distinct seasons allows for a wide range of seasonal vegetables that are used in an extensive variety of appetizing salads and side dishes - here's a selection of some of the most popular. 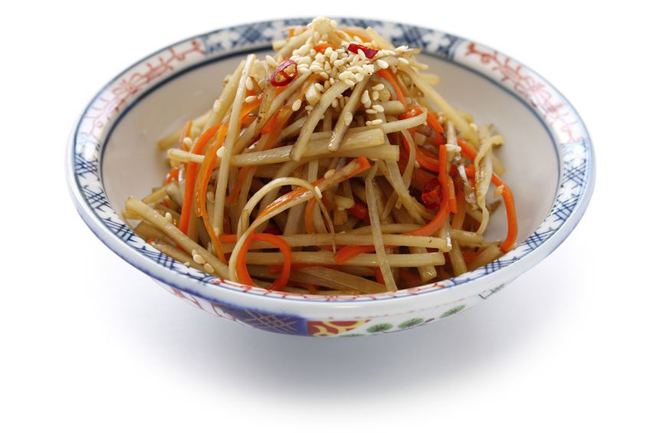 Kinpira gobo is a sweet and earthy-tasting Japanese salad of braised gobo (burdock root) and carrot. It’s made by peeling and julienning the root vegetables into matchsticks, sauteeing them lightly in oil, and then simmering the vegetables with sugar, soy sauce, and mirin. This salad is a bento box favourite, and also appears commonly in teishoku meals. For a healthier version, the ingredients can be parboiled before frying, to reduce the amount of oil needed for cooking. Finely sliced chili peppers are also sometimes used to add heat to the dish–a perfect winter warmer! 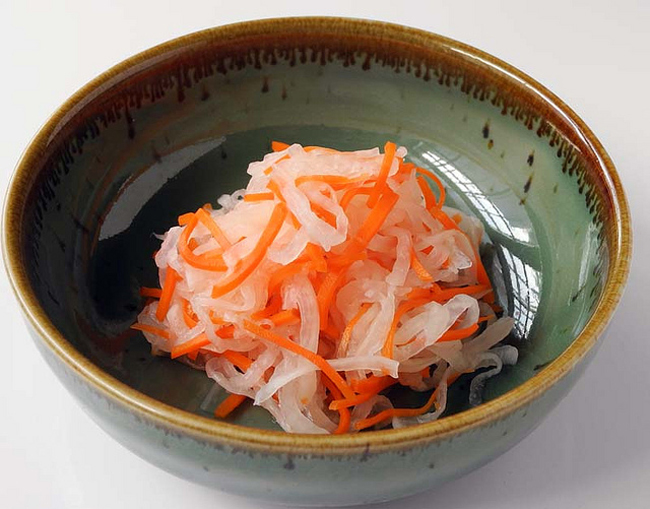 Namasu is a category of raw Japanese salad made with uncooked vegetables and sweetened vinegar. Carrot and daikon namasu is a popular version known for the remarkable color contrast between its ingredients–the bright orange of the carrot and snow-white of the daikon. To prepare the dish, vegetables are julienned then marinated in a mixture of rice vinegar, sugar and salt for a few hours. This allows allow the sharp flavors of the daikon radish and vinegar to mellow, and the texture of the ingredients to soften. 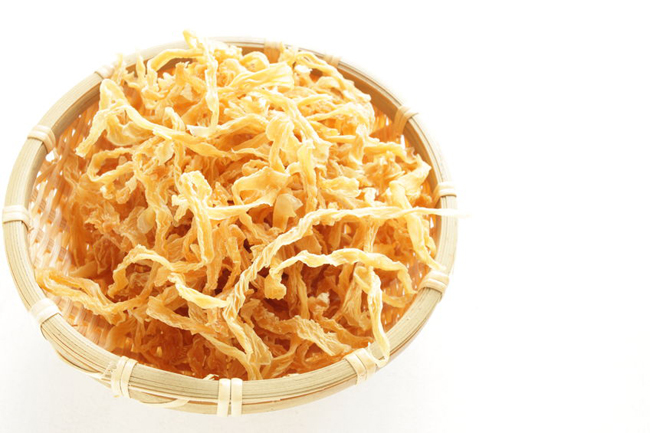 Kiriboshi daikon is a Japanese vegetable dish of finely cut and dried (“kiriboshi”) daikon that’s reconstituted with in with ingredients such as aburaage (deep-fried and sweetened) tofu and finely sliced carrot, and dressed with a mixture of mirin, sugar, sake, dashi and soy sauce. Dried daikon is extremely healthy, providing a greater concentration of nutrients and vitamins than fresh daikon, and can be used for cooking year round. 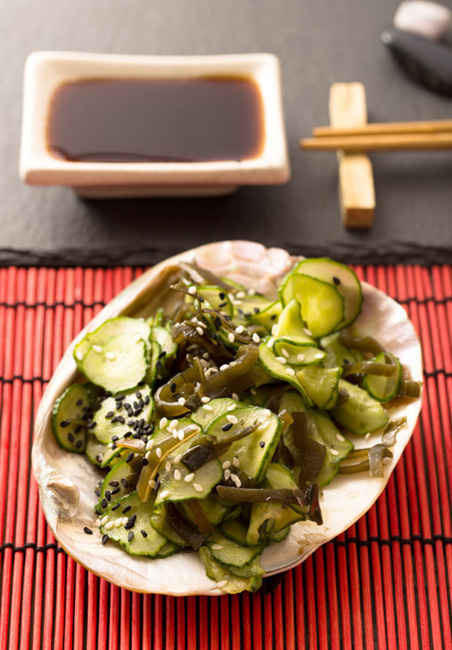 Sunomono is a broad term encompassing many types of Japanese foods pickled in vinegar (“su”). Cucumber sunomono is one of the most popular types, which also often comes mixed with kombu seaweed. To make sunomono, fresh cucumber is thinly sliced and squeezed dry, then pickled in a light vinaigrette of rice vinegar, soy sauce, and a bit of sugar. This is a very refreshing and delicate dish that can be served along many types of meals, and is a summertime favorite. 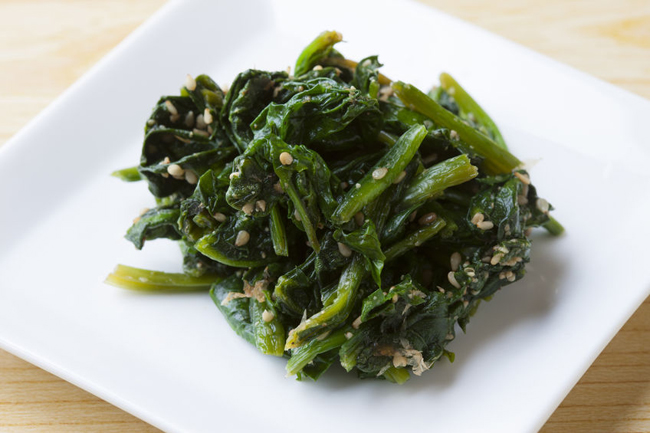 Goma-ae is a type of Japanese vegetable dish where vegetables are blanched and then dressed with a sesame dressing. This dish is typically served chilled or at room temperature. To make horensou no goma-ae, fresh spinach is blanched, cooled, and squeezed of excess liquid, then mixed with sesame dressing. This nutty, creamy and savory salad is a tasty Japanese twist on a spinach salad. 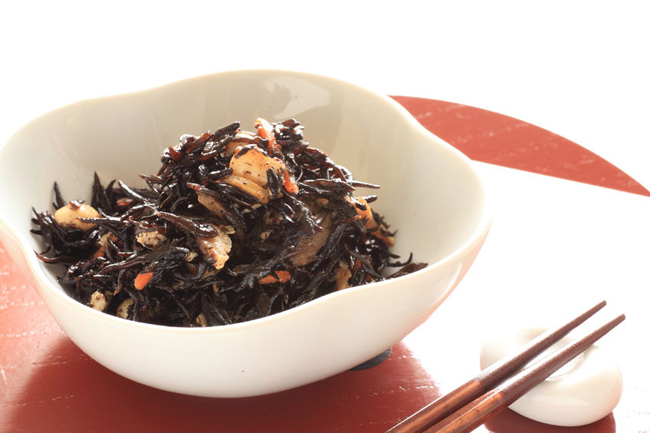 Hijiki is a wild variety of seaweed that grows on Japan’s rocky coastlines. Although largely unknown outside of Japan, hijiki has been an integral ingredient of the Japanese diet for many centuries, and is very high in vitamins and minerals. Hijiki is sold boiled and dried and needs to be reconstituted with water before cooking. It’s simmered with thinly sliced carrot, aburaage tofu, lotus root, and konnyaku in dashi with a little mirin rice wine and soy sauce, then cooled and served at room temperature. 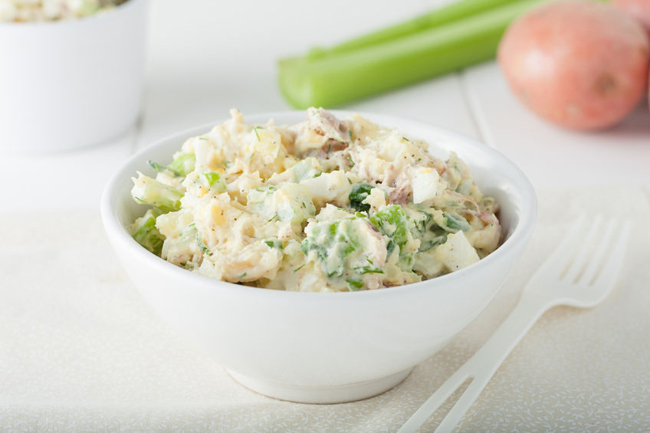 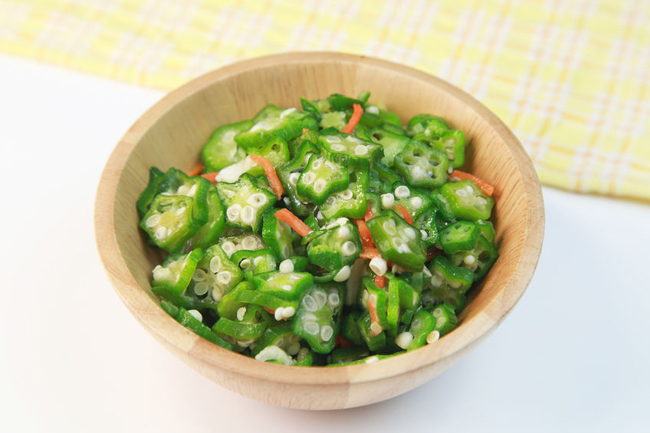 Aemono to a type of Japanese vegetable dish dressed with an uncooked dressing, and is a popular preparation technique in Japan. Okra is a popular vegetable Japan, enjoyed for its unusual slimy texture and many health benefits. To make okra aemono, okra is diced, then seasoned with soy sauce and bonito flakes. The naturally sticky texture of the okra mixes with the soy sauce to create a delicious coating with a unique texture. 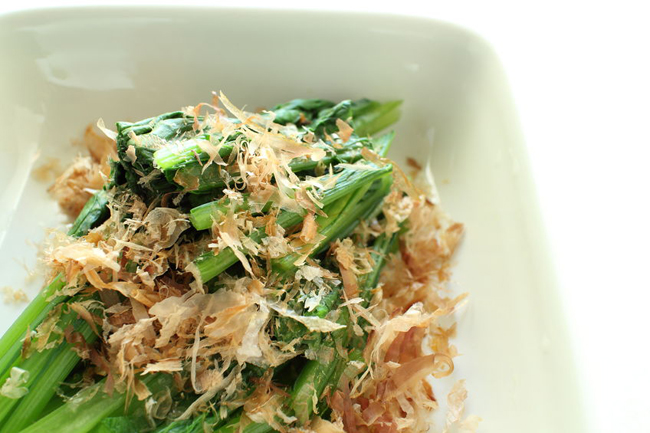 Ohitashi is another popular preparation technique for Japanese vegetable side dishes that features blanched green vegetables such as asparagus, okra, spinach and komatsuna, native Japanese mustard greens. The sliced and blanched komatsuna is dressed lightly in a mixture of dashi, soy sauce, and mirin. The dish is typically garnished with bonito flakes.

People worldwide admire the healthy and nutritious nature of Japanese cuisine. With its large and flavorful selection of salads and vegetable-based sides it's easy to incorporate a little more color and fiber into your diet–be sure to look out for these dishes while in Japan!