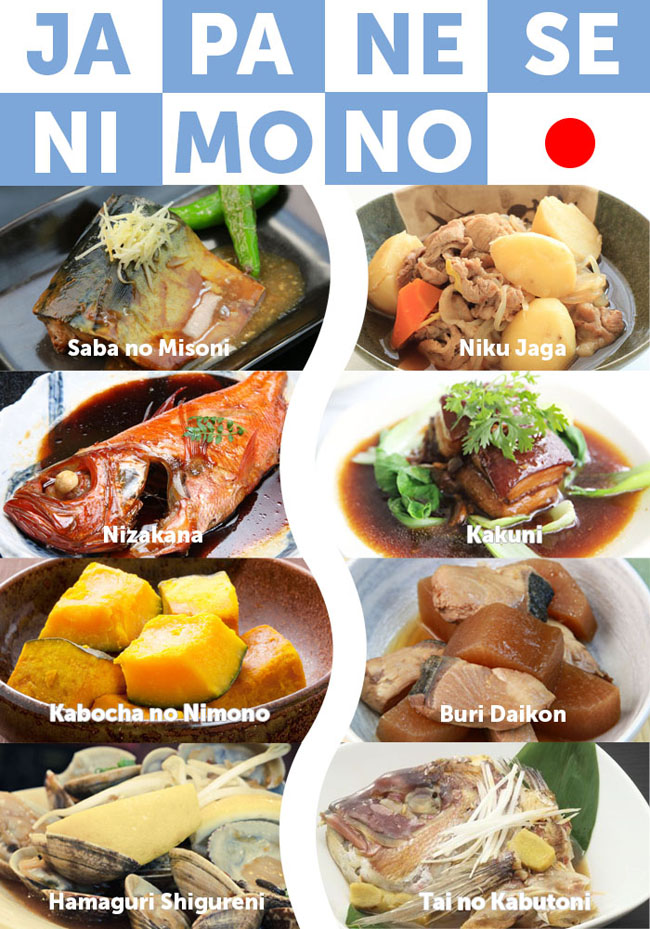 Nimono is one of the most popular cooking techniques in Japan. It’s a simple, rustic preparation using for fish, vegetables, or meat simmered in broth that is primarily used in home-style cooking. Nimono dishes are typically eaten as part of a meal at home with rice and various side dishes called “okazu”. Nimono dishes can also be packed into a bento for lunch. Sometimes, you can find nimono on the menu at restaurants such as izakaya, a type of Japanese gastropub. Nimono dishes have an important significance for Japanese people because they are frequently associated with “ofukuro no aji”, the “flavor of mother’s home cooking”.

To make nimono, ingredients are simmered slowly in dashi broth, to which soy sauce, sugar, sake, and mirin (sweetened rice wine) are added for additional seasoning. The most common ingredients for nimono are vegetables like onions, carrots, and mushrooms, as well as starchy ingredients like kabocha pumpkin, potatoes, and taro root; meats like chicken and pork; and fish like mackerel and salmon.

The final flavor of the dish varies depending on the proportions of the seasoning used and how long the ingredients are braised. Some dishes retain liquid for serving, while others are cooked until the braising liquid has evaporated or been absorbed into the ingredients.

A drop lid called “otoshi-buta” is often used when cooking nimono. The lid, which is smaller than the diameter of the cooking vessel, increases the heat of the dish and prevents the ingredients from moving around too much as they cook. This helps to preserve the shape of delicate ingredients like potatoes and daikon radish, which have a tendency to crumble and fall apart when boiled rapidly. 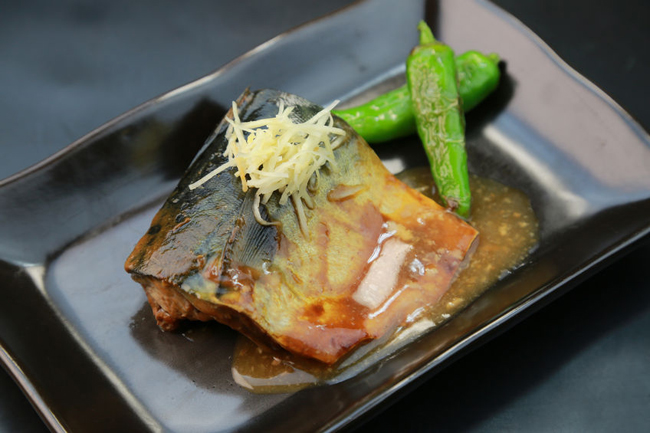 Saba no misoni is a popular dish of mackerel fish simmered in a miso and ginger-based sauce. It’s very healthy, with the omega-3 fatty acids from the mackerel and the nutritional benefits of the fermented miso soybean paste. While mackerel can sometimes have a strongly fishy taste, cooked in miso sauce it becomes easy to eat, even for those trying it for the first time. Enjoy saba no misoni alongside a bowl of steamed white rice, topped with fresh sliced ginger and diced scallions. 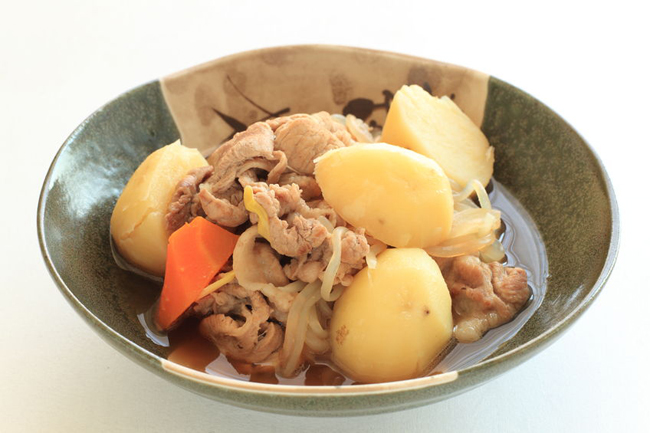 Nikujaga, literally “meat and potatoes”, is a dish of meat, potatoes, and other vegetables simmered in broth until the ingredients are tender. The dish originated in the 1800’s when people in Japan sought to recreate British-style beef stews using locally available ingredients. The result was nikujaga, which has a thin dashi-flavored braising liquid rather than a thick gravy-like stew. In the western Kansai region of Japan, nikujaga is typically made with beef, while in the eastern Kanto region it may be made with pork. The reason for this is that the plains of the Kansai region were historically cattle country, while the Kanto area was where the horseback-riding samurai were located, and it was much easier to raise pigs alongside horses rather than cows. 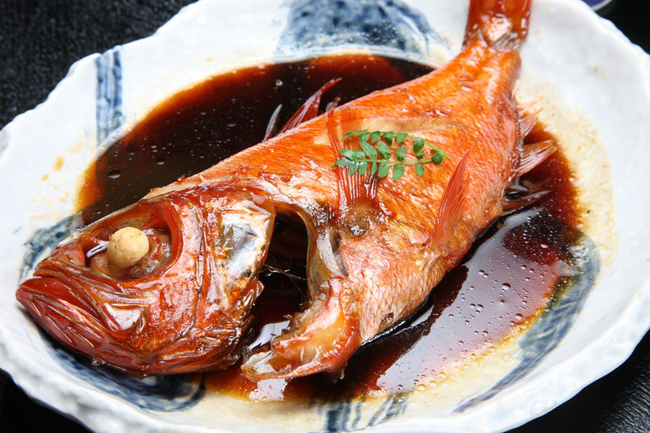 Nizakana and nitsuke are two names for braised fish cooked with soy sauce. It can be made with any kind of small fish that fits in a pan whole, such as sardines, or with the filet of larger fish such flounder. For white fish and other mildly flavored fish, a lighter broth may be used for simmering, but for oily or bold-flavored fish, a stronger broth is typically recommended. 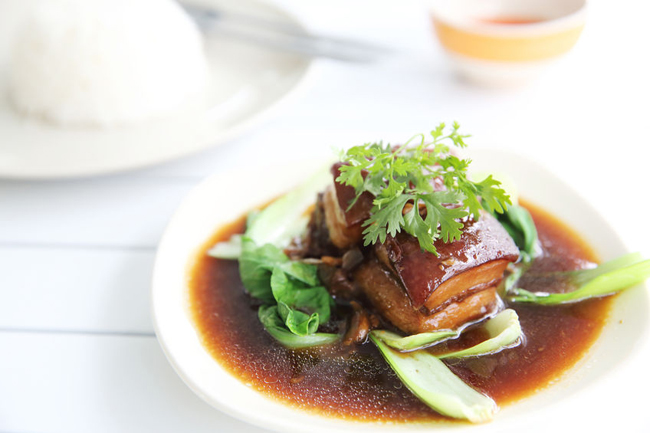 Kakuni, or buta no kakuni, is a rich dish of pork belly stewed in soy sauce until the pork becomes succulent and melts with every bite. In Okinawa, the dish is known as “rafute”. This dish is quite similar to Chinese hongshao rou (red cooked pork). 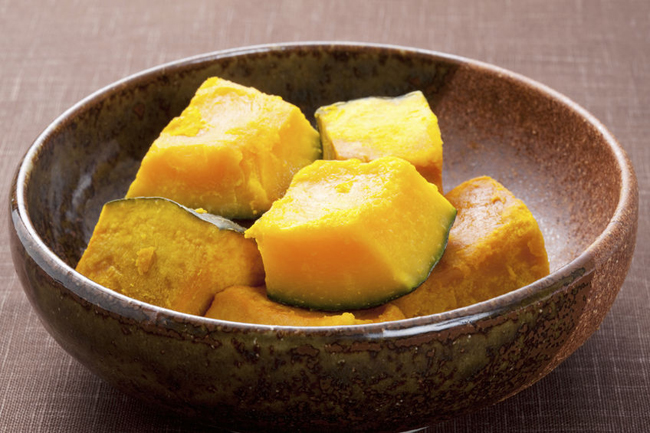 Kabocha no nimono is a dish of kabocha pumpkin simmered in dashi until the kabocha is tender and has absorbed all of the liquid. Because kabocha has such a high starch content, it’s essential not to stir the dish around too much or the kabocha pieces will crumble and fall apart. Using an otoshi-buta drop lid and simmering over very low heat can help prevent the kabocha no nimono from turning into mashed kabocha. This dish is not only delicious but also vegan friendly when prepared with a kombu kelp-based or shiitake mushroom-based dashi broth. 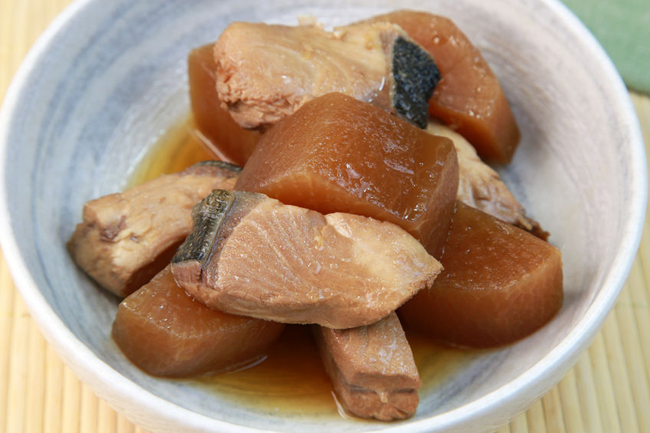 Buri daikon is a dish of simmered yellowtail fish and daikon radish that comes from Toyama prefecture, although it’s popular all across Japan. The dish is best enjoyed during the winter when yellowtail is in its peak season. When making buri daikon, it’s recommended to cut the daikon into thick discs, and then shave the hard edges of the radish with a knife (a technique called “men-tori”), which can help prevent it from falling apart as it cooks. 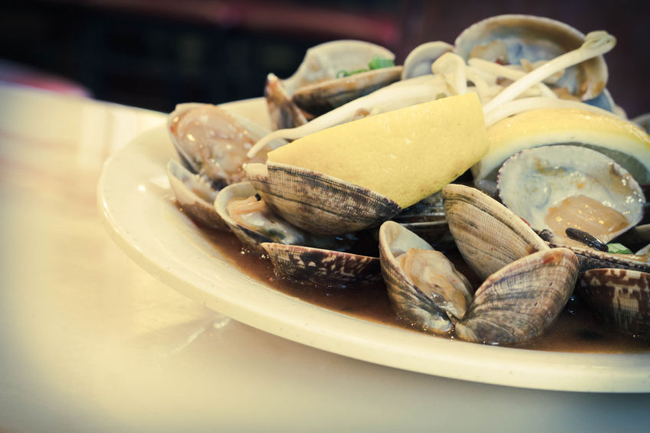 Hamaguri shigureni is a dish of hamaguri clams cooked in soy sauce until they float to the surface. It’s a dish that is primarily eaten in Mie prefecture, located in central Japan. However, it’s quite similar to another nimono dish called “tsukudani”, which is used to make the sweet and salty kombu seaweed that goes into kombu-flavored onigiri rice balls. 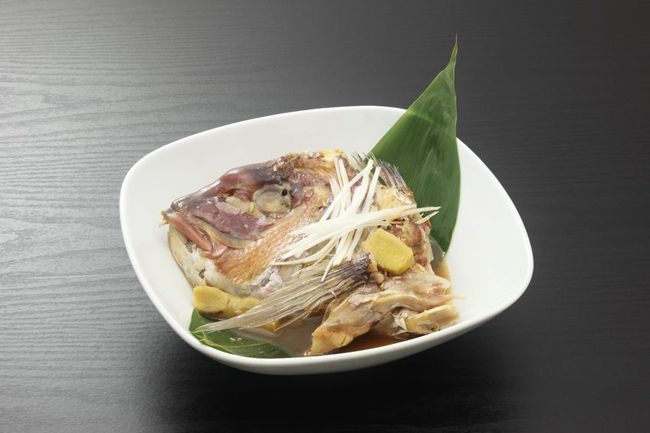 Tai no kabutoni is a dish made by simmering the head of a tai (sea bream) fish with soy sauce, sake, sugar, and fresh ginger root. Restaurants may offer tai no kabutoni on the menu if they are using the rest of the fish to make tai sushi or sashimi. It’s an economical dish that fits the Japanese principle of using all parts of a vegetable or animal when cooking.

What is Nimono? Healthy and Tasty Japanese Simmered Food

Although nimono foods are one of the most delicious parts of Japanese cuisine--and one of the most popular cooking techniques within Japan—compared to sushi or ramen, they are not typically found in Japanese restaurants overseas. On your next visit to Japan, be sure to keep an eye open for these delicious simmered dishes on restaurant menus.