What is Shabu Shabu? A Guide to Japan's Swishiest Dish

What is Shabu Shabu? A Guide to Japan’s Swishiest Dish

Shabu shabu is a popular hot pot dish from Japan consisting of thinly sliced meat and bite-sized vegetables cooked in steaming hot broth. Hot pot dining has been popular in Japan for thousands of years, since the first use of earthenware pottery, but shabu shabu itself first originated around the mid-20th century. The main difference between shabu shabu and other types of Japanese hot pot is that rather than simmering all of the ingredients together before serving, shabu shabu is cooked bite-by-bite over the course of the meal, similar to fondue.

The dish gets its name from the Japanese onomatopoeia “shabu shabu” meaning “swish swish”, which describes the light swishing of the meat in the simmering broth. When the meat is dipped in the boiling water, the extra fat melts away, making it lighter than regular cooked meat, and a rather healthy meat dish. As such, it is a very popular dish among slightly older women and people watching their waistlines.

Sometimes the cooked meat is served cold, making it reishabu. Reishabu has become a major dish, and is sold in convenience stores and supermarkets as a salad topping. Shabu shabu can be made with all kinds of ingredients, which vary according to the region you’re in. In Hokkaido, they make “takoshabu" using octopus, and "lamb shabu" served like jingisukan. Nagoya is famous for its "torishabu," using a special regional chicken called nagoya cochin. In Toyama prefecture, where there is a lot of good quality yellowtail, "burishabu" is famous. Yamaguchi prefecture is known for its fugu, or pufferfish, in a shabushabu dish called "tecchiri". “Pork shabu,” made with high quality black pork, is very popular with tourists visiting Kagoshima and Okinawa prefectures. If you’re feeling a bit adventurous, you can easily make it at home, too. Read on to learn all about how to make and eat your own shabu shabu.

How to Make Shabu Shabu 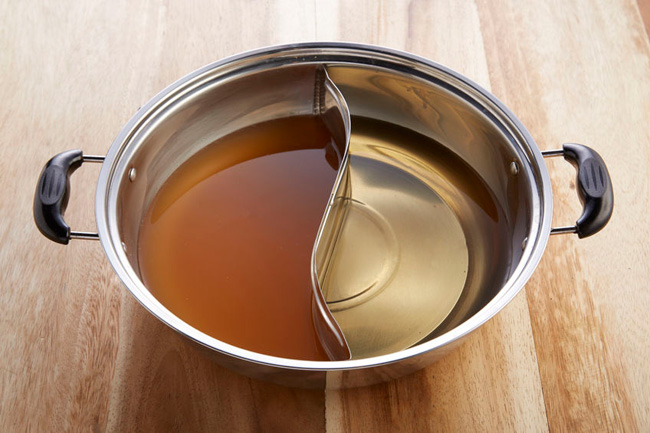 To make the broth, a simple dashi stock is prepared by steeping a piece of kombu seaweed in water. The kombu stock heightens the natural umami flavor of the ingredients without masking them. No other seasonings are typically added; however, for an added twist it’s possible to use other types of hot pot broth for shabu shabu, such as kimchi-flavored broth or tonkotsu pork bone soup. 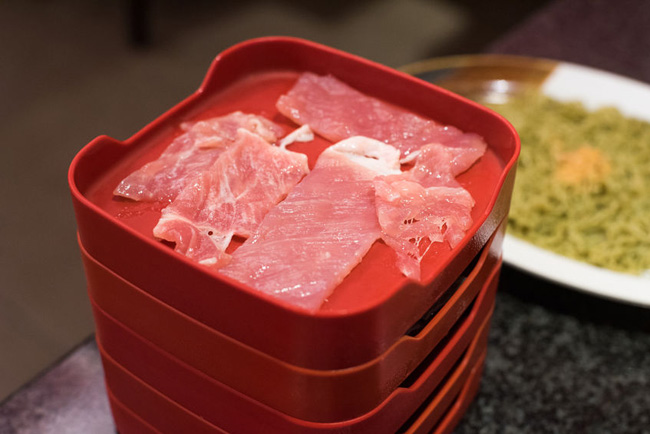 The meat used for shabu shabu is usually thinly sliced beef or pork. In Japan, a premium shabu shabu experience can be enjoyed with richly marbled A-5 rank wagyu beef or kurobuta Berkshire pork. Other offerings include thinly sliced chicken or lamb, while more adventurous diners might opt to try game meat like wild boar, bear, or venison or even thinly sliced fugu (pufferfish), the potentially poisonous Japanese delicacy. 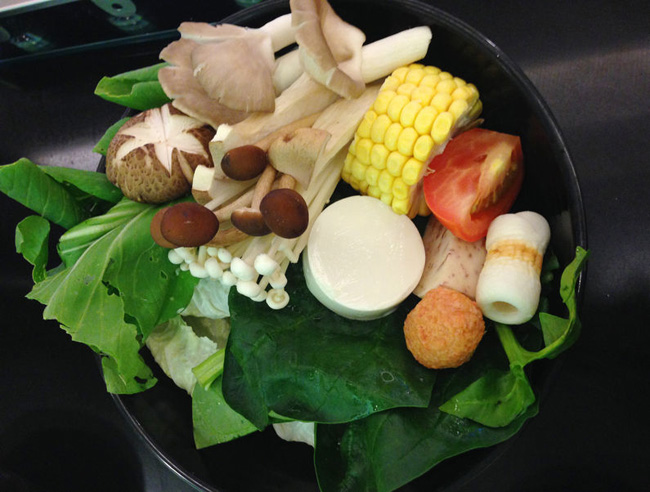 Shabu shabu is the perfect meal for enjoying a wide range of vegetables, and vegan and vegetarian diners can even opt to forgo the meat for a fully vegetable-based meal. Staple shabu shabu greens include napa cabbage, shungiku (daisy flower greens), and Japanese leek. Mushrooms like hearty shiitake and white clusters of enoki may also be used, as well as smaller clusters of buna-shimeji (brown beech) mushrooms. Other ingredients include onions, carrots, and soft tofu, as well as seasonal vegetables like kabocha pumpkin in the autumn, potatoes and lotus root in the winter, and sweet corn in the summer. 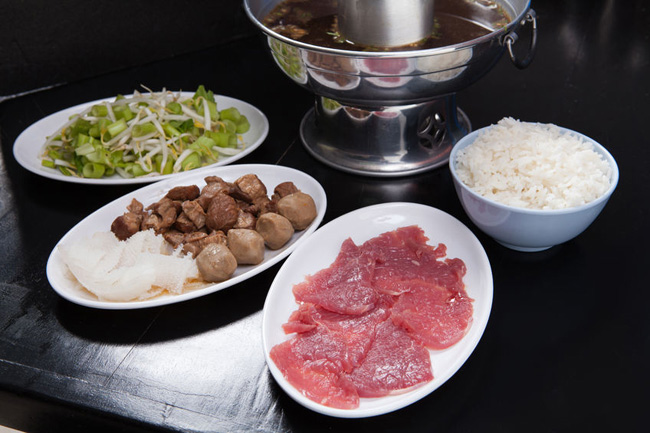 Condiments like chili oil, crushed garlic, toasted sesame seeds, sliced spring onions, and grated daikon radish or momiji oroshi (spicy grated daikon radish) can be used to customize the flavor of these sauces. Udon noodles may also be added to the hot pot dish at the very end to finish off the meal.

How to Cook Shabu Shabu

To cook shabu shabu at home, you’ll first need to chop the vegetables into bite-sized pieces and slice the meat thinly. Japanese supermarkets will carry paper-thin sliced beef and pork in the meat section; or if you have access to a full-service butcher, you can request thinly sliced meat from your butcher. Otherwise, you can buy a well-marbled ribeye steak or pork loin and slice it yourself. Just make sure to put the meat in the freezer for a couple of hours until it becomes firm, but not quite frozen, for easier slicing. 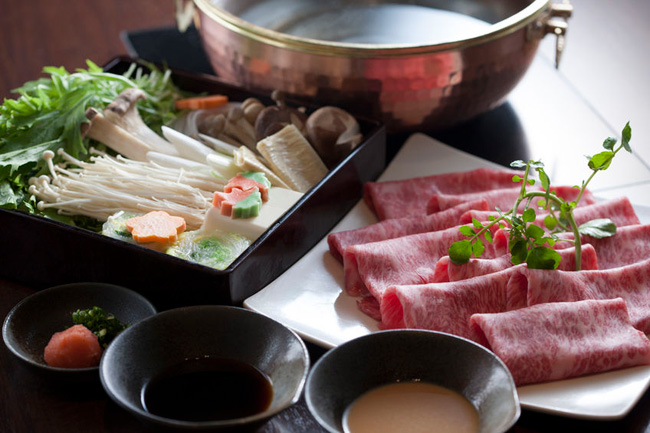 Next, prepare a large pot and a portable burner or hot plate for cooking the food tableside. 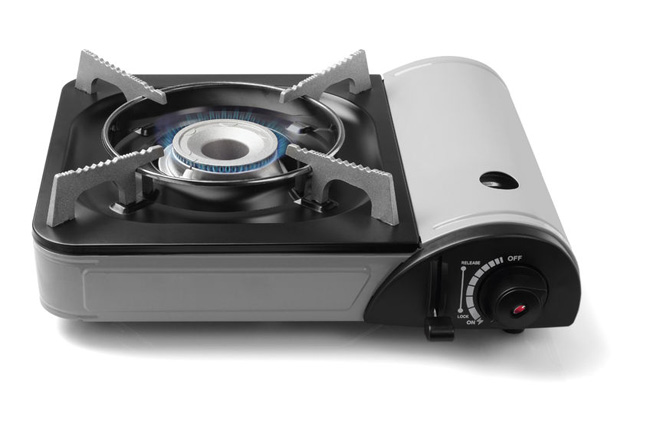 In Japan, a wide pot called a “nabe” is used for shabu shabu, but any shallow heavy-bottomed pot will work. Prepare the dashi soup by setting the nabe on the hot plate and adding a piece of kombu kelp to season the broth. Cover and allow to come to a low boil. 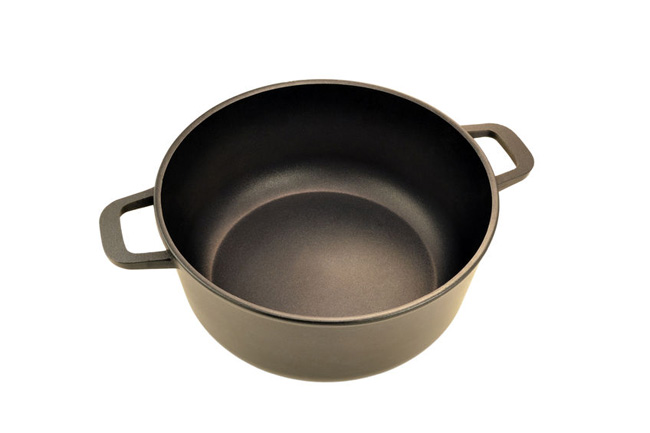 Before cooking, you’ll need place-settings for everyone at the meal—a bowl of rice, plus two smaller bowls for the dipping sauces, and chopsticks. You’ll also want to have a large pair of cooking chopsticks for transferring uncooked food into the boiling water. It’s a good idea to have a straining ladle handy for lifting cooked items out of the hot pot, as well as a skimmer for clearing the froth from the surface of the broth while cooking. Set out your sliced vegetables and meat, and when the water comes to a rapid simmer, it’s time to begin cooking!

How to Eat Shabu Shabu

Learning how to eat shabu shabu is easy. First, use the cooking chopsticks to add some vegetables to the steaming broth. Firmer vegetables like carrots, potatoes, and the white stalks of napa cabbage take a little longer to cook, while leeks and other green vegetables cook more quickly. You can time when ingredients will be ready to eat by adding the slower-cooking vegetables to the pot at the beginning, and more of the faster-cooking vegetables as the meal progresses. Next, add the slices of meat, just one or two pieces at a time, using the chopsticks to swish the meat lightly through the broth, and then remove the meat and vegetables from the pot as soon as they are cooked through. Finally, dip the meat in the ponzu or goma dipping sauce before savoring that first luxurious bite of rich, tender beef or pork. 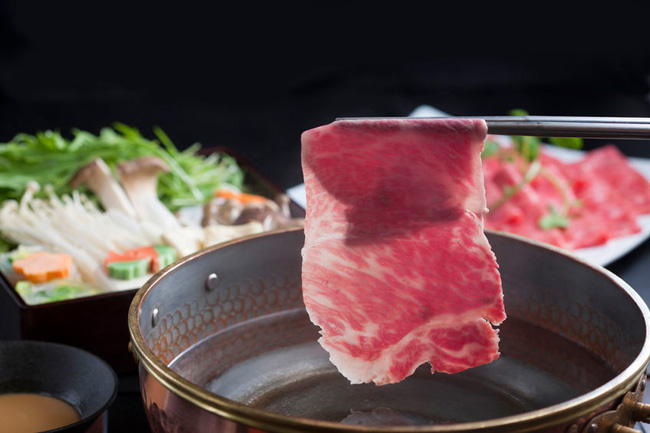 As you enjoy your shabu shabu, try to avoid adding too much meat to the pot or it may overcook and become tough in the boiling water, and too many vegetables can cause the temperature of the broth to drop, which may lead to uneven cooking. When you’ve finished eating the meat and vegetables, you can udon noodles to the broth or some rice and raw beaten egg to make a richly flavored porridge to finish the meal.

Now That You Know How to Make & Eat Shabu Shabu - Get Swishing!