What To Eat in Fukuoka (Kyushu, Japan)

What To Eat in Fukuoka (Kyushu, Japan)

Fukuoka is the biggest city in Kyushu prefecture and one of the great gourmand cities of Japan. Historically, the city’s location on the northern shore of Kyushu made it a gateway via which Chinese and Korean influence entered the country, which led to a unique cuisine and many unique Fukuoka foods that have since become popular all throughout Japan.

The city began as twin towns formed around a river: “Fukuoka”, the castle town to the west of the river where the samurai lived, and “Hakata”, the merchant town to the east which was famous for its arts and crafts and industrious people. The two towns merged in 1889, but the term “Hakata” is still widely used today to refer to Fukuoka food, language, and culture.

With its warm weather, excellent public transportation system, and amazing food, it’s no wonder that Fukuoka appears every year on the top 10 most liveable cities in the world based on quality of life. Read on to learn more about what to eat in Fukuoka on your next visit.

6 of the Best Fukuoka Foods 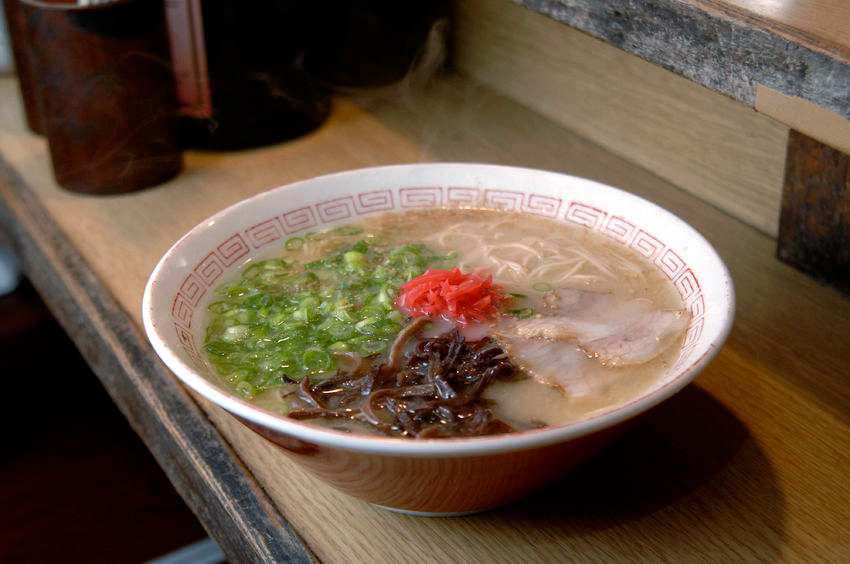 Perhaps the most well-known food to come out of Fukuoka is Hakata ramen. Named after the old name for the region, Hakata ramen is a distinct type of ramen with pork bone broth and thin straight egg noodles. It has become one of the most popular styles of ramen, not only in Japan but around the world. The soup is made by boiling bones from every part of the pig for a gelatinous stock with a powerful scent and flavor. Hakata ramen originated close to the docks in old Hakata, where busy workers needed a fast bite to eat, so the noodles were cooked very quickly until just al dente. No doubt you’ll find it so delicious you’ll need to order “kaedama” (a second helping of noodles)! 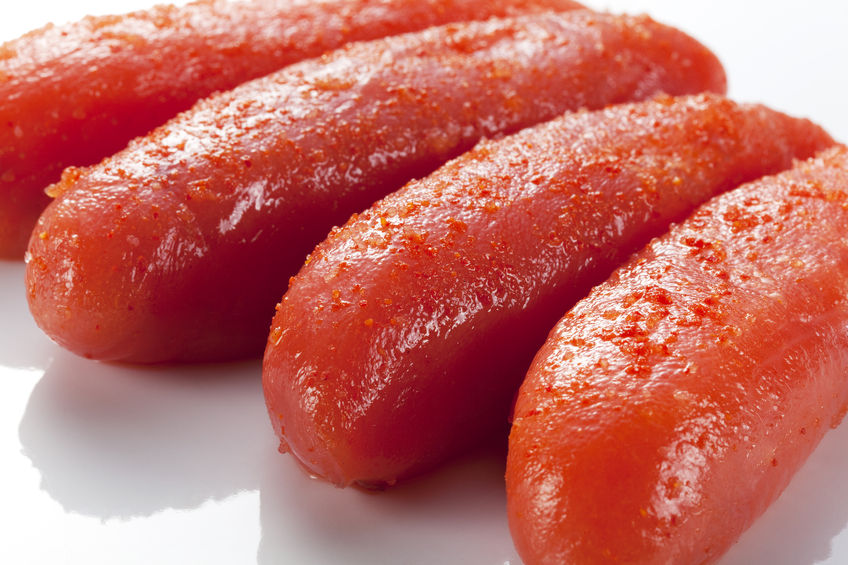 Mentaiko is the spicy salted version of tarako, the roe of the pollock fish. It came to Fukuoka after World War II via the port city of Busan in Korea, and has become popular to eat over rice or as a pub snack with some shochu, sake, or beer. Mentaiko can also be used as an ingredient for cooking, such as mixed with cream for a pasta sauce, or used as a topping for pizza and other dishes. When visiting Fukuoka from other parts of Japan, it’s very common to buy packaged mentaiko as an “omiyage” (souvenir) to bring back home. 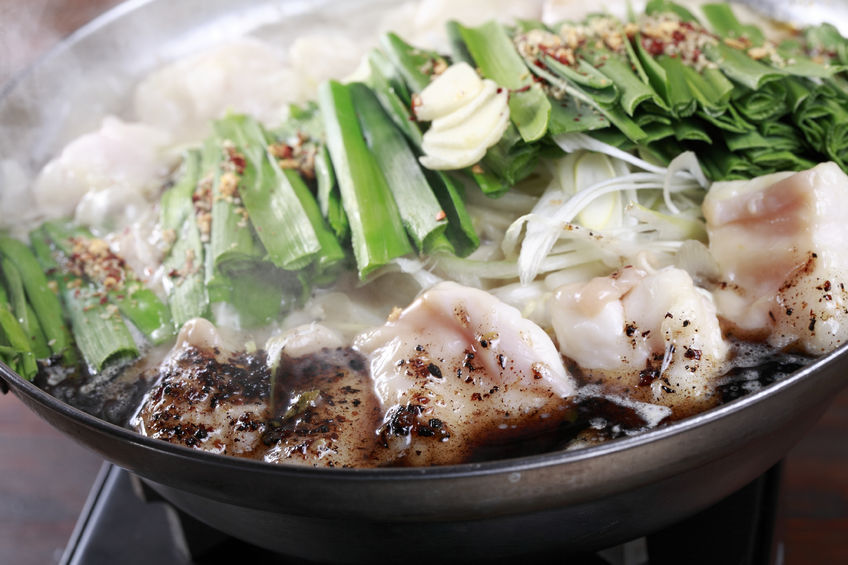 Another of the best Fukuoka foods, which has become popular across Japan, is motsunabe, a hot pot (nabe) dish made with beef or pork giblets (motsu). While eating offal is not so popular in some Western countries, the Japanese ideology of “mottainai” (which roughly translates to “waste not, want not”) prizes using every part of the animal for cooking. The giblets are carefully cleaned and blanched to remove any harsh odors or flavors, and then simmered in a strong broth of soy sauce or miso, which stands up well to the bold flavor of the organ meat. Garlic, chives, and chili pepper is also added for an irresistible taste. At the end of the meal, rice can be added to the pot to make a richly flavored porridge. Be sure to enjoy motsunabe with some of Kyushu’s regional liquor, shochu. 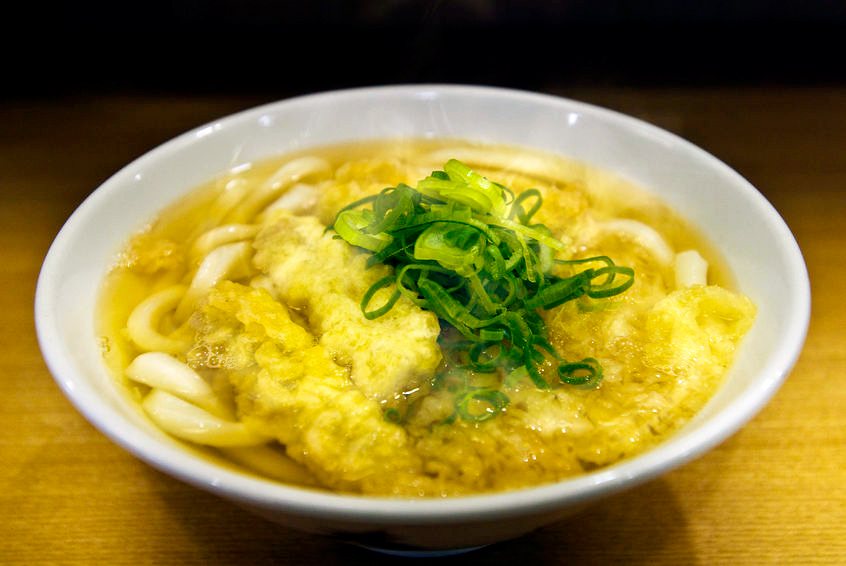 While the word “Hakata” often brings ramen to mind, udon is just as if not more popular to eat in Fukuoka, as the area is the second largest producer of wheat in Japan. Thick Hakata udon noodles are made with local wheat flour and cooked until soft, while retaining a dense, chewy center. They noodles are served in a gently sweet broth made with bonito (skipjack tuna), sardines, kombu kelp, and dried seaweed. Common toppings include plenty of sliced Hakata green onion and goboten. Goboten is shredded gobo (burdock root) that has been battered and fried tempura-style until crisp, which is why another name for Hakata udon is “goboten udon”. Although Hakata ramen is delicious, it’s also quite rich and fattening so many locals try to avoid eating it too often. Hakata udon, however, is a food that can be enjoyed several times a week with less guilt. 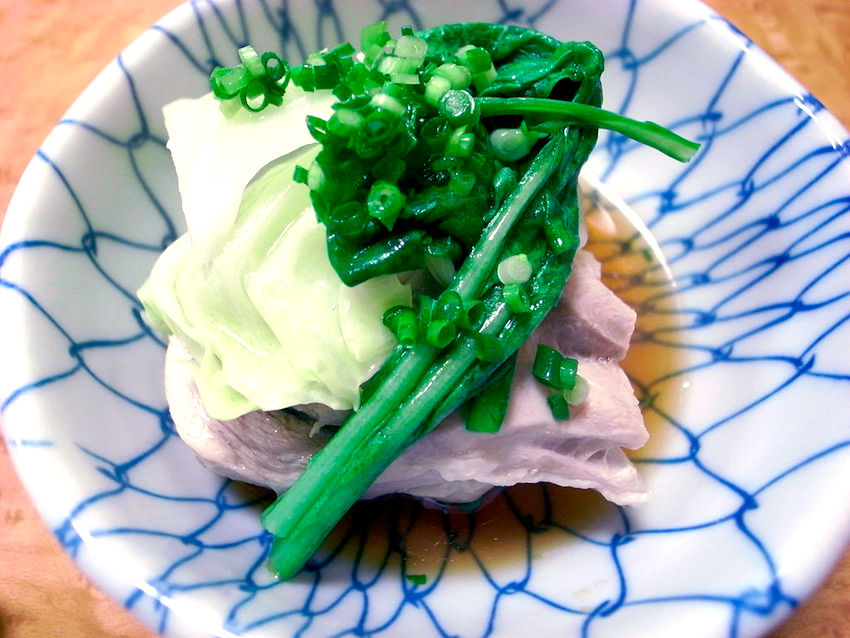 Mizutaki is another classic Fukuoka food, comprising a hot pot dish made with Kyushu’s native jidori chicken. Although hot pot is typically a winter dish in Japan, mizutaki can be enjoyed all year round. Free-range chicken on the bone is simmered gently in flavored broth, along with Hakata green onions and seasonal vegetables. As the chicken bones release their collagen, the broth becomes rich and silky smooth. The cooked chicken is then served and eaten with citrusy ponzu sauce. 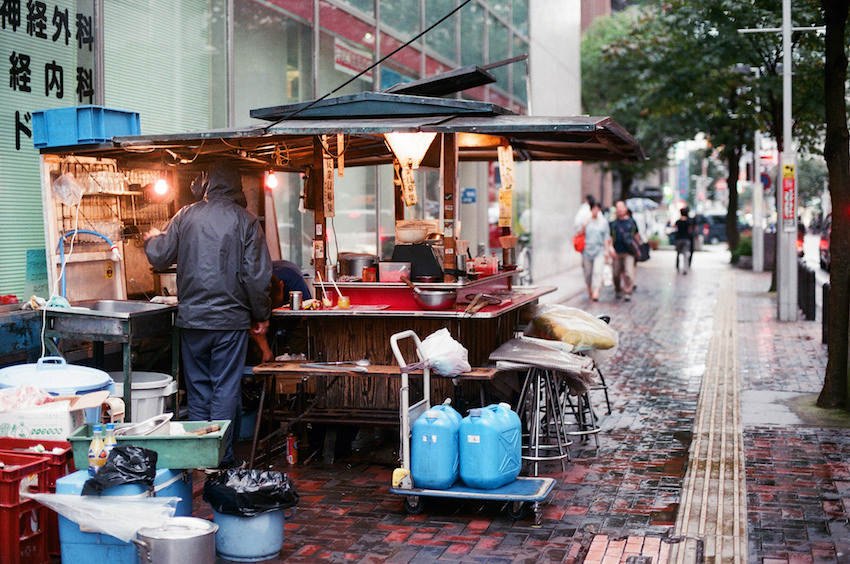 At night, the Nakasu entertain district close to the waterfront comes alive with over 200 yatai (street food stalls) offering up ramen, grilled chicken skewers, and a variety of alcoholic beverages. These bustling stands are popular with both local office workers and tourists—foreign and Japanese—and have become a major symbol for the city. It’s common to go around from stall to stall trying different foods, known as “hashigo” (ladder) dining, similar to a pub crawl. So don’t be shy to take a seat at one of the stands and rub elbows with other diners!

Away from the bigger cities of Tokyo and Osaka, Fukuoka offers its own unique vibe and plenty of amazing things to eat. Be sure to plan a visit on your next trip to Japan, and check out the Gurunavi listings when looking for where and what to eat in Fukuoka. Itadakimasu!