What to Eat in Japan: 12 Unique Japanese Foods

What to Eat in Japan: 12 Unique Japanese Foods

Japanese food is a favorite cuisine for people around the world, and many visitors to Japan look forward to trying popular dishes like takoyaki, okonomiyaki, yakiniku and shabu shabu.

Read: What to Eat in Japan - 18 Tasty Foods from Ramen to Taiyaki

However, there is a wide range of unusual food in Japan that you may not know about. While some of these foods are less-well known in foreign countries but common in Japan, a few of the items are unusual delicacies even for Japanese people. However, these unique Japanese foods provide the opportunity for a memorable dining experience on your next visit.

12 Types of Unusual Food in Japan to Try 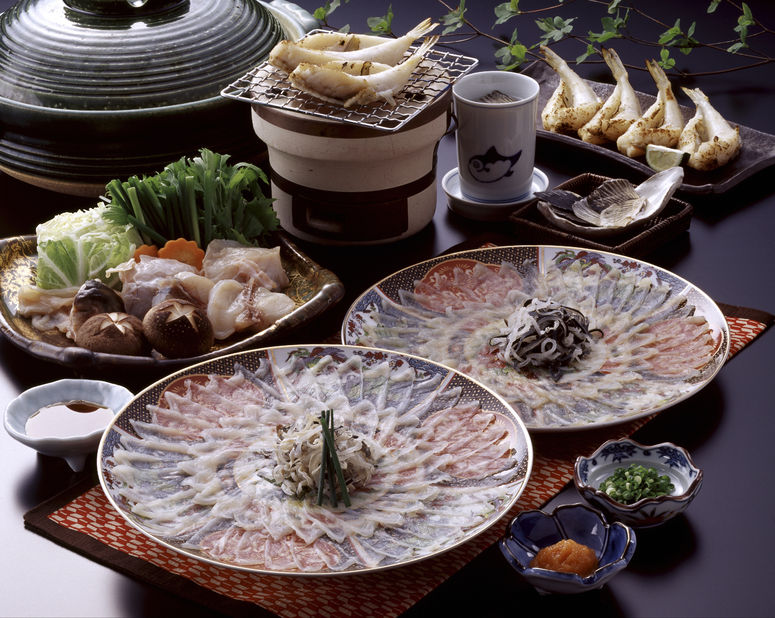 Fugu is the Japanese name for the poisonous pufferfish, a delicacy that carries the risk of death if prepared incorrectly. Pufferfish contains a toxin even more deadly than cyanide and has no known antidote. In Japan, it’s prepared by experts who train for years on how to remove the fish’s highly toxic organs without contaminating the rest of the meat. For daring eaters wondering what to eat in Japan, fugu can be enjoyed in dishes such as fugu sashimi, called “tessa”; karaage (fried fugu); and fugu hot pot, called “tecchiri”. 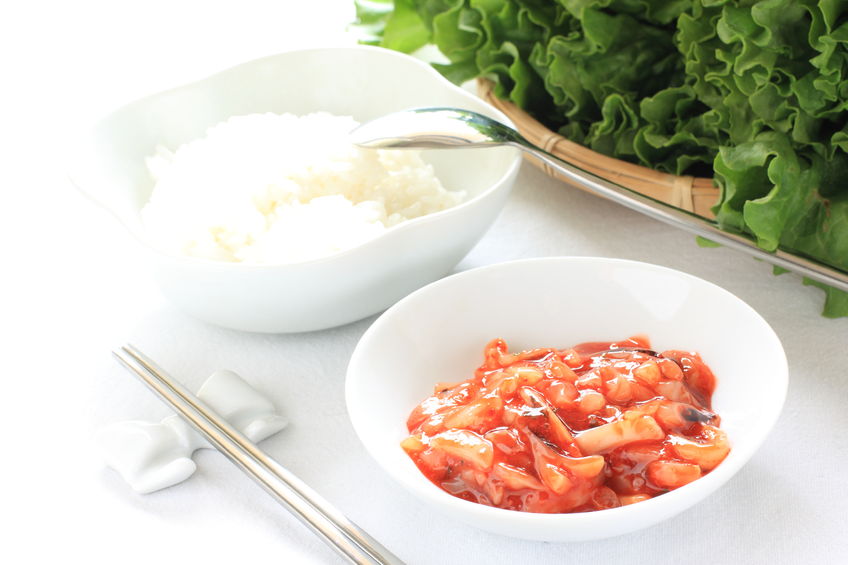 “Chinmi” is the title given to unusual Japanese delicacies that are an acquired taste. It’s an easy way to identify which dishes even Japanese people find strange and unusual, as opposed to those foreign only to Westerners. The most classic example of chinmi is uni, the delicate orange or gold-colored reproductive organs of the sea urchin, which may be eaten raw, steamed, or cooked into a creamy soup or pasta. Two other examples of chinmi that may make even Japanese people squirm include karasumi, (mullet roe pickled in salt), and konowata (fermented sea cucumber guts). These are typically enjoyed alongside sake or beer, which may help the unusual bites go down a bit more easily. 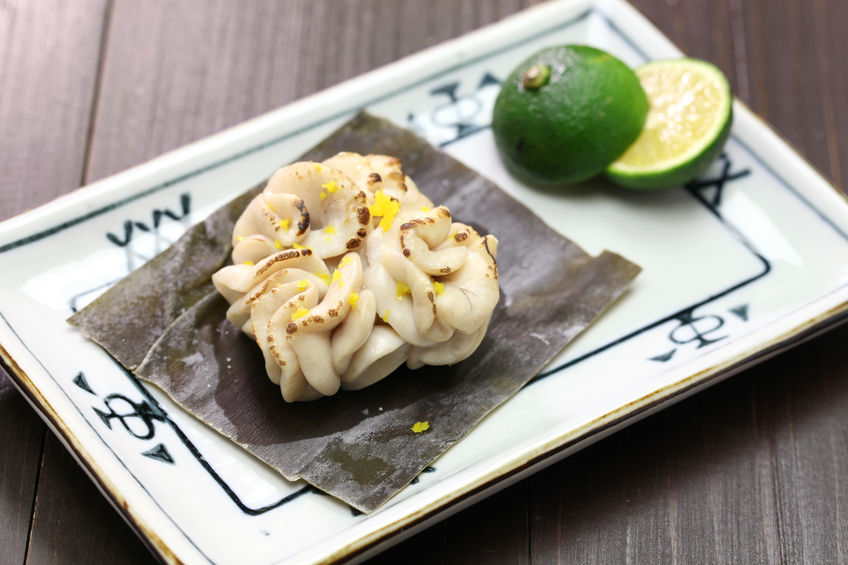 Shirako is a creamy delicacy that’s enjoyed during the wintertime in Japan. In English, the name means “cod milt”, or the sperm from male cod. Soft, white, and squiggly, shirako can be eaten raw with a bit of ponzu, a citrus and soy sauce dressing, or cooked in a hot pot dish 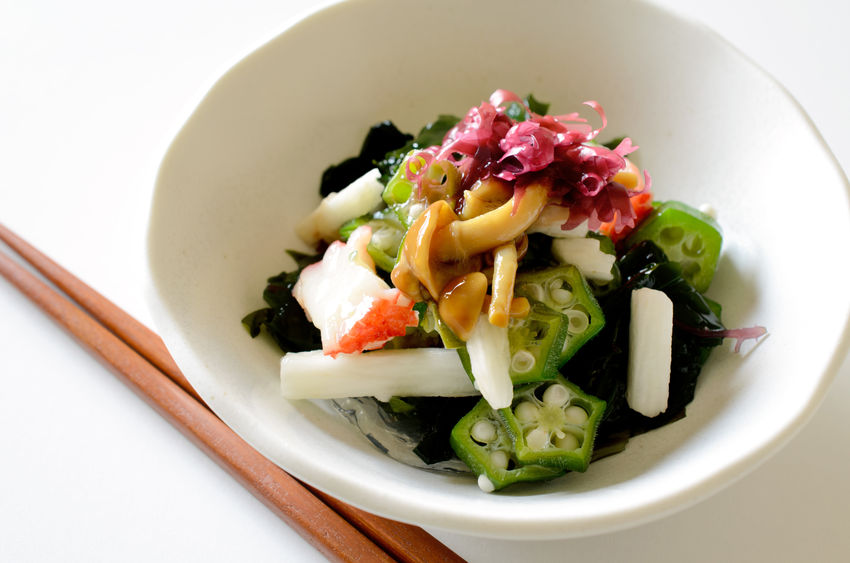 Neba neba foods are a unique Japanese food that is very popular within Japan, but that some foreigners may find a bit strange or off-putting at first. These are foods that have a naturally sticky or slimy texture and are often eaten over hot rice such as okra, tororo (grated yam), and sticky nameko mushrooms. Several different neba neba items may be piled together on a bowl of hot rice for the dish “neba neba don”. These foods owe a lot of their popularity to the fact that they are seen as a restorative food that cools the body in hot weather—perfect for those humid Japanese summers. 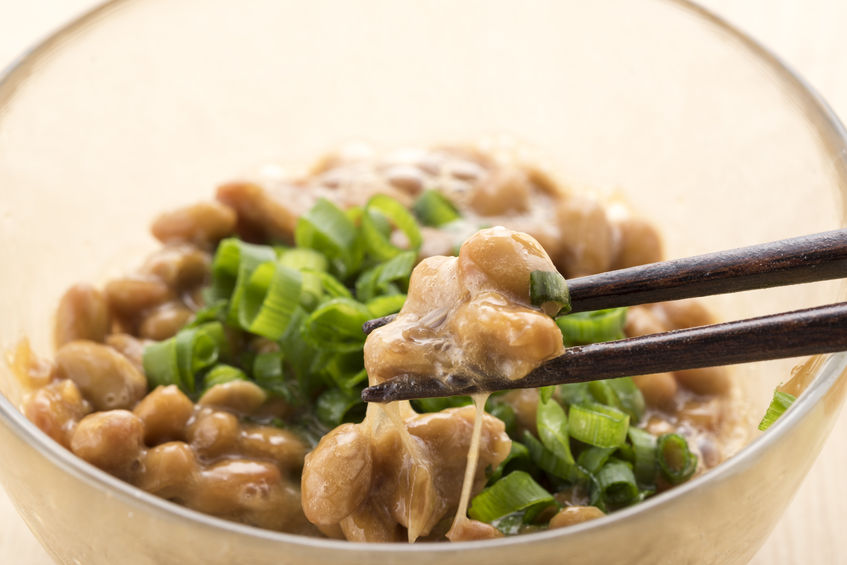 A type of neba neba food, natto is contentious enough to get its own separate description. This dish of sticky fermented soybeans eaten over rice has its die-hard fans as well as plenty of people in Japan who can’t stand it. Natto is typically sold in individual portions which are whipped with tare sauce and spicy mustard using chopsticks until the mixture becomes frothy and then poured over hot rice. For the best results, some people say you need to stir the natto 100 times before eating. 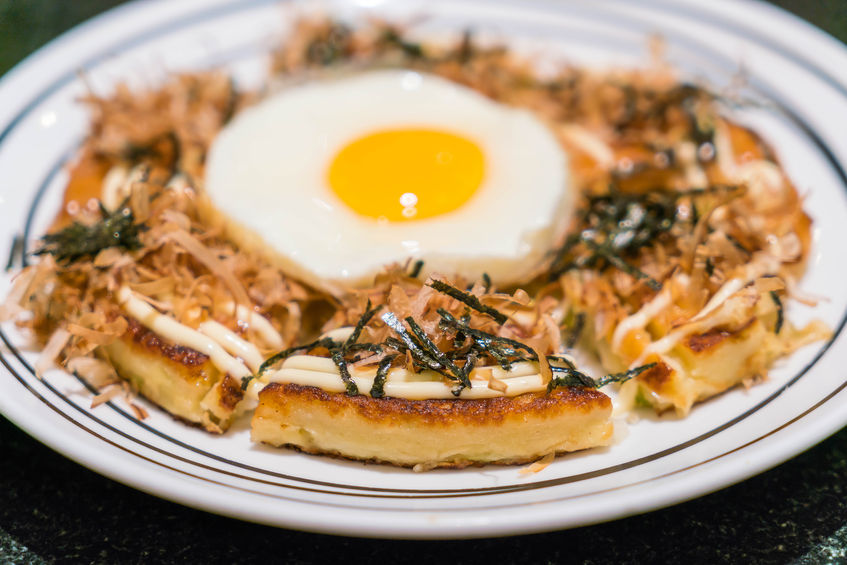 “Wafu” and “yoshoku” may seem like two types of unusual Japanese foods to Western visitors, but these cuisines are very popular within Japan. Wafu means “Japanese-style” and refers to dishes like pasta and pizza prepared with local ingredients to appeal to Japanese tastes. Some examples include uni cream pasta and pizza topped with shirasu (baby anchovies). Yoshoku means “Western-style Japanese food” and include dishes like curry rice, hambagu (Hamburg steak), and omurice (omelette rice) which are not traditionally Japanese food but which became popular during the Meiji era as Japan sought to modernize and adopt a more Western-style diet. 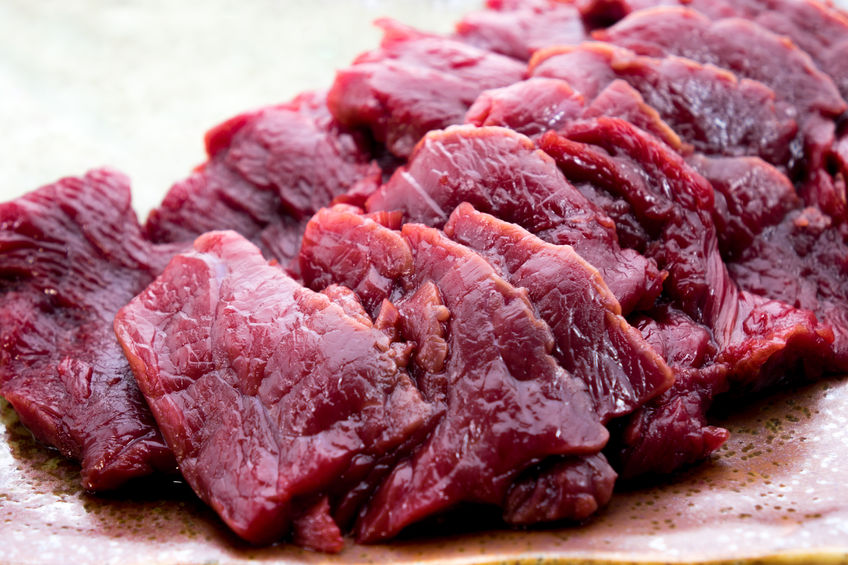 Basashi, or raw horse meat, is a contentious food for some visitors to Japan as it is not only raw, but because horse meat is banned for sale for human consumption in some countries like the United States. If you have no qualms about eating horse or raw meat, however, you may find that you quite enjoy basashi. The meat is lean yet tender and offers more protein than beef, while also being less fatty. In Japan, it’s typically served with soy sauce or ponzu dressing and fresh ginger or garlic for garnish. 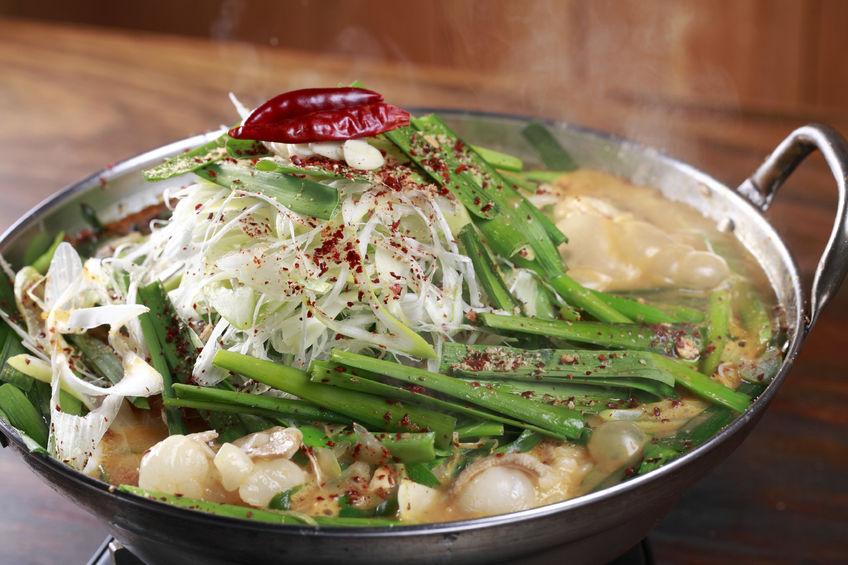 Tripe and organ meat may not be popular in some countries, but in Japan it’s eaten in a hot pot dish called “motsunabe”. Beef or pork giblets are cleaned and blanched to remove any unpleasant taste and then simmered in a hot pot of miso or soy sauce broth, along with garlic, chives, and chili paper. The bold flavors of the ingredients pair well with the strong flavor of the organ meat. Motsunabe first originated in the Japanese food capital of Fukuoka, but is now enjoyed all across Japan. 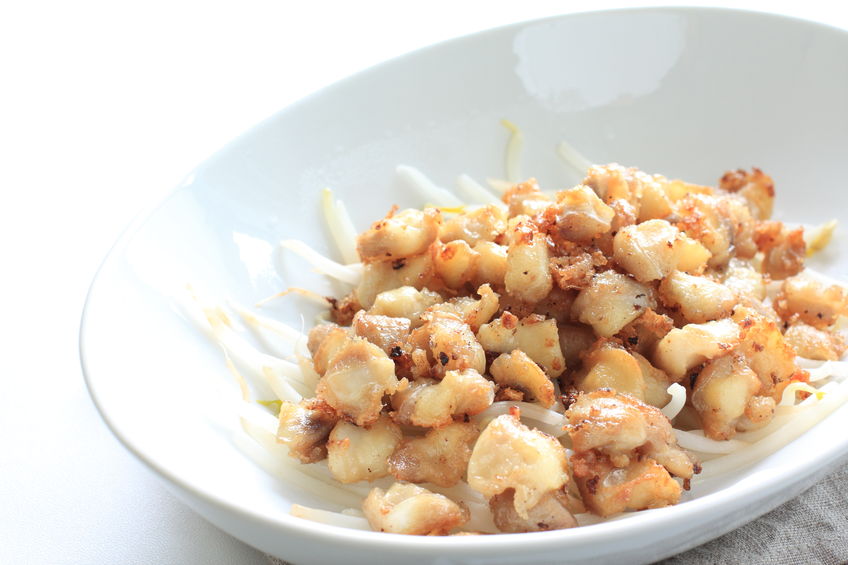 If you’re a fan of fried chicken, you’ll want to try the unique Japanese version called “nankotsu” or fried chicken cartilage. The dense and chewy jelly-like cartilage becomes crunchy from deep frying and tastes great with some fresh lemon squeezed over it. 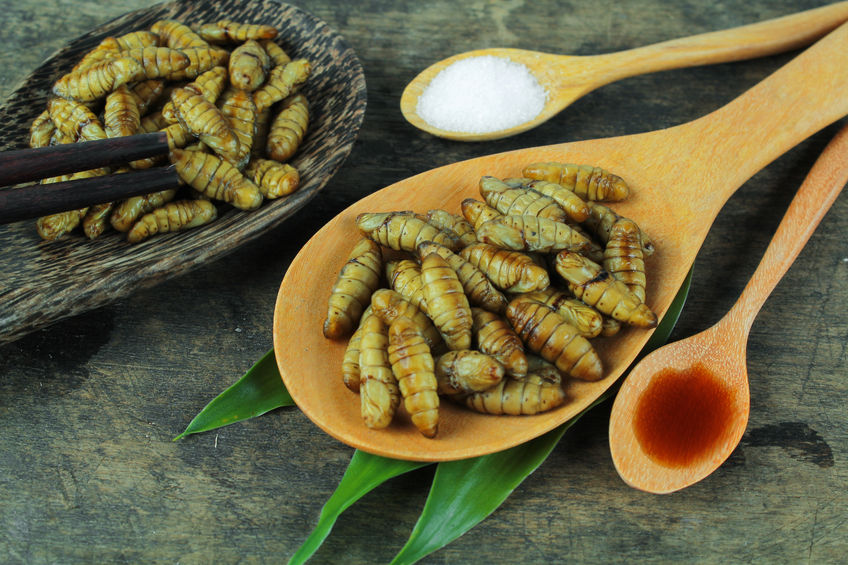 “Inago” is a dish of grasshoppers, typically cooked tsukudani-style in soy sauce and mirin until they become crisp and highly flavorful. In the past, inago was more commonly consumed as people would catch grasshoppers to prevent them from damaging rice crops, but with the modern use of pesticides and other preventive farming techniques, inago has become more of an uncommon delicacy. “Hachinoko”, or bee larvae, are a delicacy from Nagano prefecture and can be served candied or cooked into a savory dish over rice. Proponents of bug eating say that insects are an excellent source of protein and vitamins that’s more environmentally friendly than eating animals. 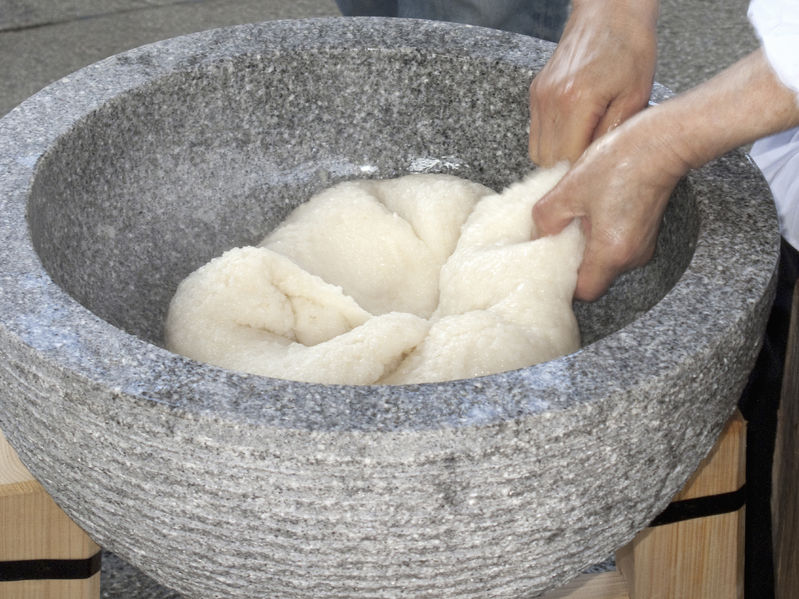 Mochi are a unique Japanese food best describe as “rice cakes”. In recent years, they are becoming more well-known outside of Japan, especially with the popularity of frozen mochi filled with ice cream. In addition to the more familiar chocolate, strawberry, and green tea varieties of mochi, there are plenty of other flavors available in Japan which foreign visitors may strange or unusual. This includes “kusamochi”, a somewhat grassy-flavored rice cake made with yomogi (mugwort plant). In addition, there are plenty of sweet and tasty mochi varieties available in Japan that are hard to find in other countries, such as mochi coated in toasted sesame seeds or kinako, a powder made from toasted soy flour). 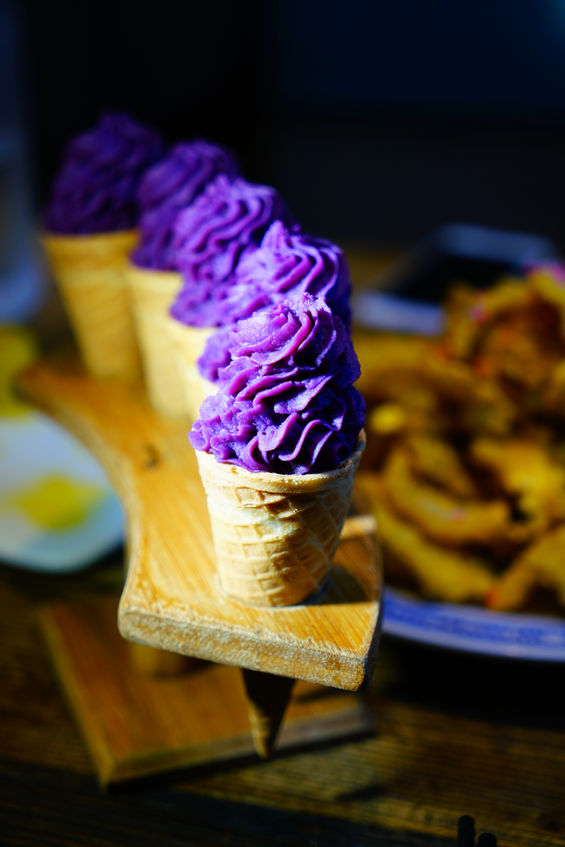 Ice cream is a popular treat in Japan, especially creamy soft serve. In addition to the usual flavors, Japan is home to a slew of unique, and sometimes bizarre, flavors. If you’re interested in checking out some Japan-only flavors, try murasaki-imo (purple sweet potato), red bean or miso flavored ice cream. If you’re feeling truly adventurous, be on the lookout for flavors like wasabi, soy sauce, and even squid ink

Read: 10 of the Most Bizarre Japanese Ice Cream Flavors Flavors

Wondering What to Eat in Japan? Try Fugu, Mochi & More

Whether you’re into extreme eats or simply seeking out a culinary experience you can’t find anywhere else in the world, be sure to look for these unique Japanese foods on your next trip to Japan. Check out the Gurunavi listings for the best guide to Japanese restaurants for any and all cuisines. Itadakimasu!